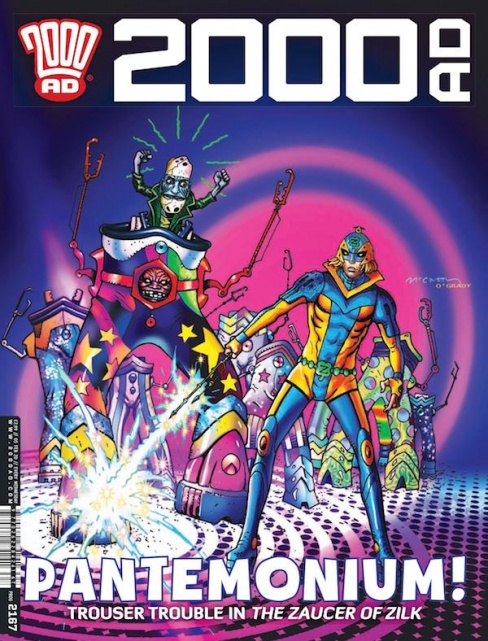 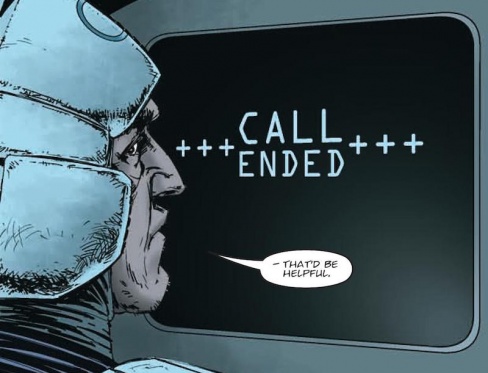 Michael Mazzacane: There is an understated comedy to Rory McConville and Jake Lynch’s “Future Crimes Unity.” Lynch’s line work is on the scratchy side, there is a grungy seventies sci-fi texture to this strip, which makes the concept of comedy seem antithetical. It lacks the overdetermined fascist aesthetic that underpins the satire of Warhammer 40k. Never the less comedy finds away nestled in at the margins. On the first page it comes from the progression of the Future Crime Units precog reports. At one end of the page we see the Judges foiling a terror attack that would’ve reportedly taken out 50 people. By the end of the page the Judges are stopping a gang of insomniacs from robbing 3 million creds worth of toenails from the toenail museum. McConville sneaks in some visual humor on the next page as the Judges wait for a supposed Fattie riot. My nestling in these moments of humor and absurdity the creative team are able to mostly play the sci-fi concept of time travel straight, while turning it up a notch the way “Dredd” tends to without overwhelming everything.

While time travel is at play it is grounded and skewered at through the bureaucracy of the Justice Department. The funniest moment is the absurdity of daily life in Mega City One, but the bureaucratic sycophancy of trying to leverage Dredd to get more funding because more money will always solve everything or the concept of loyalty within a department. This strip seemed (pre)destined to be in a space similar to Minority Report but is come at it from its own dreddian perspective.

Rory McConville’s art work is overall well done, but there is a bit of friction when the dead body shows up. Conceptually the apge is supposed to track everyone in a single instant when the body from the future drops in. However, the middle pannel muddies the spatial relationship to everything where it appeared that Bolsom was the one being zapped. Placing the dead Judge in the extreme foreground makes sense but there is just a bit of friction to an otherwise well done easy to read strip. 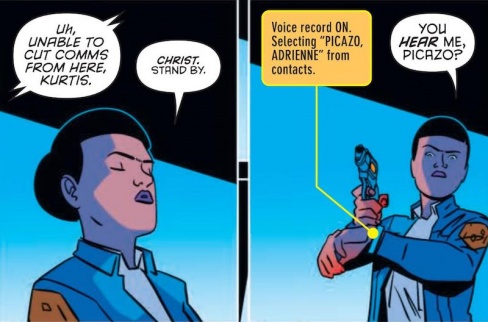 Rowan Grover: Eighteen issues in, “Hate Box” has finally established who the clear-cut antagonist of this series is and the twist works so well and I’m so here for it. Abnett finally orchestrates the climactic showdown between Bridget and Adrienne and after all the light buildup in their relationship from progs past, this feels like a genuinely earned moment. Adriene is condescending and dark when talking to Bridget, yet she thinks she knows just how to push her buttons. The clever switcheroo that occurs here is that it’s actually Bridget that knows how to play with Adriene, giving us a scene that makes intended readers undoubtedly cheer for our capable protagonist. The final scene shows a quick yet dramatic shift in the power struggle, however, showing that “Hate Box” still has plenty of steam to power through to the end.

Culbard does some great layout work in this prog, especially on the first page with the first five panels featuring different shots of Bridget. Each panel gives us a different look at the character, which gives us a super-quick visual representation of the quirks that make up her personality. We also get great of a silhouette in the next sequence to disguise to both Adriene and the readers that Bridget is sneaking up to a point where she can take her once-mentor out. The shadows make it feel very classicly espionage and it adds an extra level of tone and genre to the book that I didn’t expect this late in its narrative life. The brawl sequence also shows Culbard’s eye for kinetic, clumsy action that feels realistic and human, which works great for these characters.

“Hate Box” is using all its previously developed plot points superbly in this climax of the storyline. Even if you aren’t caught up, it’s worth checking this series out just to see the fantastic storytelling techniques on display here. 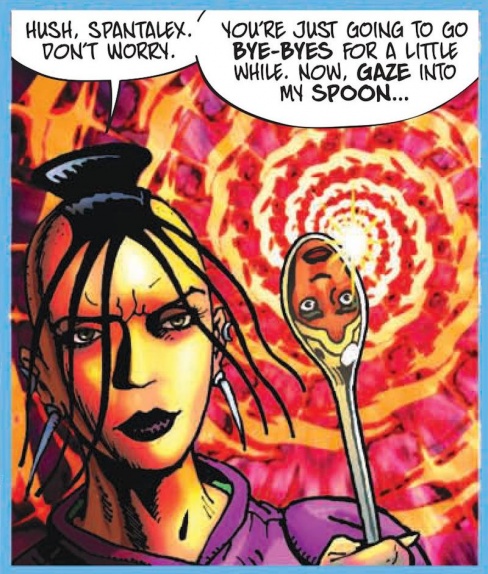 Christopher Egan: Last time in “The Zaucer of Zilk” we left off with a woman flying over the city of Curtaindown, but we had no inclination as to whether she would be friend or foe to the Zaucer, and as Hogan would have it, we are still unsure what her motivations are, but she seems to be keen on taking over the city for the time being. As this introduction moves back to the Zaucer’s whereabouts, he is flying high over The Town of Zilk as the ‘fancy pants’ continue to rage and cause pantemonium. In a pretty humorous turn, the Zaucer decides he isn’t going to deal with that mess, not now and not by himself anyway.

Calling on the aid of Craggaknock, they drop down into the wacky pants mayhem and begin kicking ass. We finally get a character moment that has been set up since the first issue: The Zaucer and T’Tooth come face to face. Having believed T’Tooth dead, the Zaucer gets just the briefest inkling of what this newly turned villain’s motivations are. The Zaucer doesn’t want to fight him, knowing him as a one time ally. Hoping to avoid further confrontation and destruction, the Zaucer apologizes to T’Tooth. The issue ends with this apology and look of both anger and shock coming from T’Tooth. Will the Zaucer’s pleas and apologies be enough to stop this rage fueled battle?

A Zaucerful of Zecrets Part 6 does a nice job of adding more mystery to this overall bonkers plot and finally begins to put the main characters in a position of actually moving the story forward to one of any number of conclusions. It nicely pays off some aspects that were hinted at right from the start while leaving things with a nice open cliffhanger leading us to next week’s Prog. The art team is still bringing their A game to this issue and they have an outstanding sense of continuity for their palettes and detailing of characters.

Christa Harader: We have some of the humor back, but this week’s a bit of a backstory dump and more talking in rooms. At this point in the story, it’d be nice to get back to the head bashing and keep the action high – and, apologies readers, it appears we’re in for more strips than we bargained for.

Abnett and Ellson lost the punchiness of the first few installments in five, and we’re hard-pressed to ratchet it back up in this week’s jaunt. Wrath’s decision might be interesting, but this world’s far more engaging when it’s goofy, quite frankly. Ellson’s art is serviceable, and the colors are a bit more varied in the indoor shots (as usual.) Parkhouse’s lettering remains crisp and readable, and there’s a ton of dialogue to work in this time. Wrath’s balloons are interesting when contrasted with other characters, but more of her compatriots mean we lose a little bit of the flow trying to decipher all that text. That’s not on Parkhouse, however, but on the script and its various considerations.

Overall, placeholders and interludes are fine, but bring back the fun! The banter between Wrath and Bode juxtaposed against the deadly serious nature of their quest and the utterly weird world they inhabit is what makes this a strip to come back to. 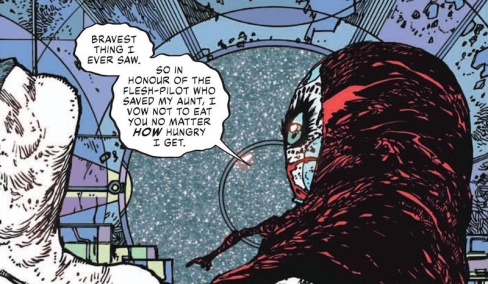 Greg Lincoln:Michael Carrol’s script returns to its explanatory slow burn this week and if you slow down a bit you can appreciate just how Henry Flint’s art stands out this week. Carroll gives Midnight Indicating Shame more depth through her actions and inaction concerning Proteus Vex’s recovery from the mortal damage done to them last week. Despite the violence committed by Midnight to do help Carroll maintains a very British sense of humor in the telling of this tale. So, last week Proteus found the Baryon and was kind-of killed by him how does Carroll Top that? He gives us tension as Midnight keeps her urges in check, allowing the mortally wounded body of Proteus Vex to recover and he tells us why the leader went through all this trouble to escape to begin with. Where the story will go from here is anyone’s guess, and we’ll likely be wrong.

What is for sure is that the pages will be a joy to see. If you read through this visual feast by Henry Flint quickly as he delivered the action in these few pages you missed out on enjoying some very lovely artwork. Flint’s art has a Kirby like quality to its expressive dynamic creativity. He manages to humanize all the non-human characters. The dark swath of black that is Midnight is visually and story-wise the emotional core of Proteus Vex, he makes her the figure around which the story seems to flow, following her trajectory across theses pages.

The setting created between Carroll and Flint is a compelling and fully realized vision. They bring in all the various intriguing races in this new universe in this few pages and show Vex outside his uniform/costume. Their work has the feeling of deep history and richness that makes you want this story to go on and dread its ending.