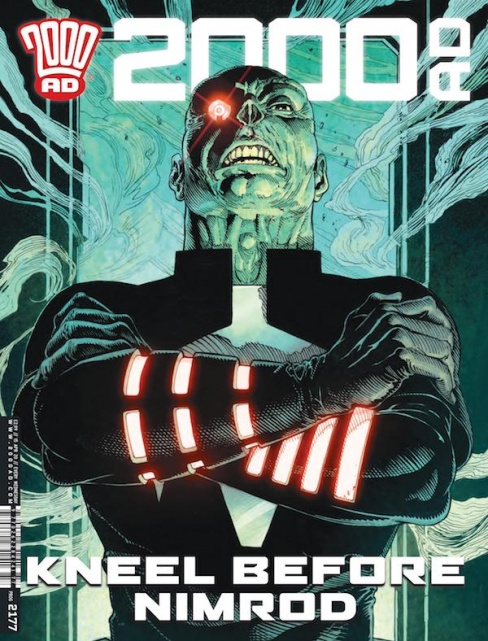 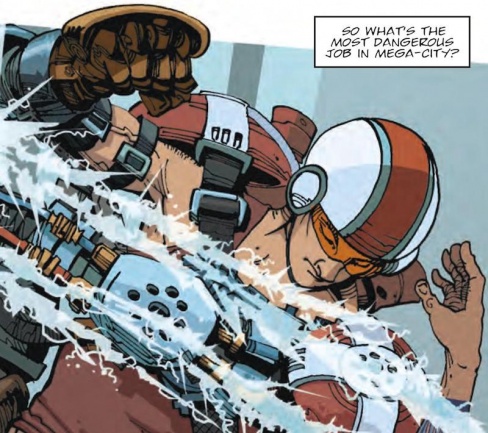 Michael Mazzacane: ‘Due Process’ is fun one shot that moves the perspective away from Dredd and into something approaching the “common man” of Mega City One, in this case Dillon Fenster the person with one of the most dangerous jobs in the city: Process Server. He’s that guy who gives people their summons, people tend to like them even less than lawyers. This shift means Dredd is treated more as an icon, a living legend/celebrity that is known on every block, which a treatment I tend to prefer. In the right hands Dredd is an interesting character but for one shots it is hard to do a lot with the 6 pages at hand. Focusing on Dillon also allows for an exploration of the bureaucracy that undergirds the authoritarian rule of Mega City One. Dillon is a small cog in a much larger machine, he’s a no body. What is interesting is Niemand’s script treats this job in a very contemporary and dystopian way. Dillon is a Process Server as gig worker. He risks his life for a larger corporate body that dose not care about him and farms out these dangerous tasks to people like him instead of someone like a Judge. This strip was produced well before all of the current moment, it would’ve read satirical and darkly humorous than but now it feels down right eerie in a good way.

Carl Critchlow Page design gives ‘Due Process’ a lot of energy. How they arrange panels make pages appear to explode off the page, panels are rarely square and even more often jutting off at weird angles circling around a larger image. A recurring design feature is mixing in a large background piece and overlaying the other panels around it.

The basic plot of this strip works well for a one shot with Dillon eventually being called into a job that also happens to feature Dredd. There is an everyday quality to the normally tense situation they find themselves in that feels quintessential Dredd-verse. While Dredd is a supporting character in this piece Niemand works in a few good lines, in particular lamenting that he is late for a block war at Tilda Swinton block.

Last weeks strip was a smart use of decades old continuity to create the emotional fulcrum for a strip, this week is good example of just how to write a “Dredd” strip without the need for specific continuity references. 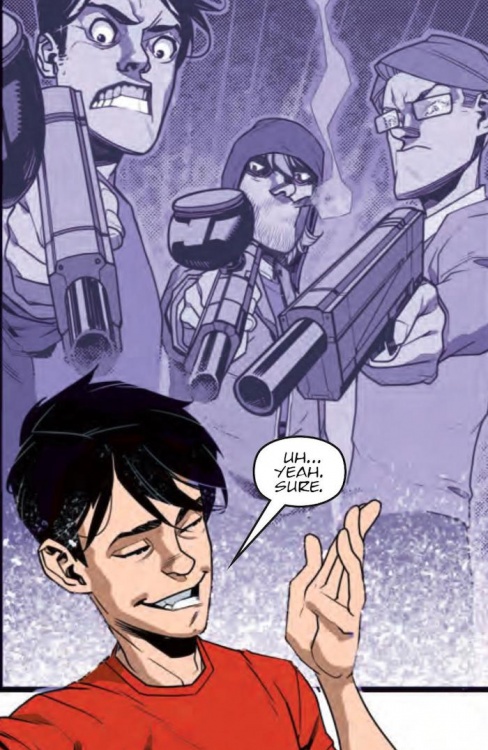 Gustavo S. Lodi: On the third entry of the ‘Crisis of Infinite Nerds,’ the storyline for “Survival Geeks” takes a dramatic turn for the quirky and weir, and the overall package is all the better for it. While the last instalment leaned too much in action (and felt uninspired, specially in light of its very strong first issue), the third chapter is much stronger.

Taking place on a multiversal hub (which makes fund of both comics and videogame only competitions), the story on “Survival Geeks” has next to zero action on it, instead focusing on… trivia pursuit.

In a very self-referential manner, the story pokes fun at comic reader and the usual obsession on nick picky continuity details, and the general bragging rights of simply knowing a character or series to a level of completion.

The script is sharp, the dialogues are even sharper. And the art style, which remains on that borderline of cartoony and grounded, remains very effective and easy to read, despite the very strong level of attention to nuance and backgrounds.

All in all, this third chapter of “Survival Geeks” was a sure rebound to the unexpected surprise of the series debut.

Brian Salvatore: After seven chapters, we are finally getting a clear look at what Nimrod’s plan is, even if the motives are still a little shaky. Peaty and Marshall have abandoned the flashback format, and are telling the story in real time, which adds substantially to the excitement and perceived danger. For the first time in seven weeks, there are real stakes felt at each turn.

Marshall gets to draw the most action he’s had in this entire strip, and it suits his style well. Nimrod himself is a familiar design, very Deathlok-inspired, but he cuts an ominous figure. Teague’s colors continue to be primarily in the green/blue family, which makes the red of blood and charred flesh pop and adds some important detail to the action sequences.

Overall, the story is still taking entirely too long to engage, but at least the basic mechanisms to push the story over the finish line appear in place. 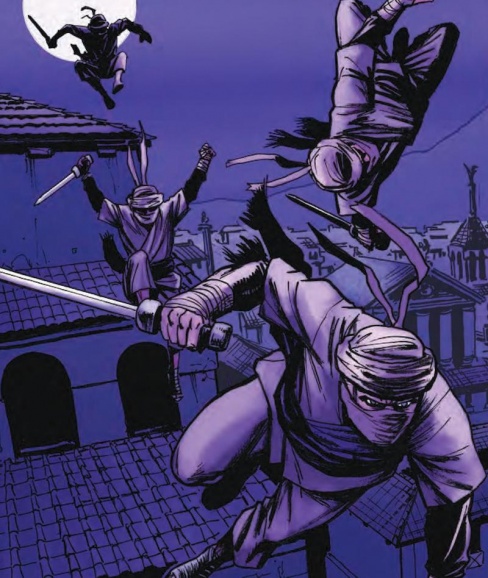 Christopher Egan: The fourth chapter of Aquila’s new saga has quite the sensational tonal change. It becomes a full on action sequence with some modern sensibilities, even down to an obvious change in Rennie’s dialogue. It feels a bit anachronistic, with 80s movie one-liners and a simply more modern tone overall. While Aquila and his companion attempt to make their way out of the city and to the next place to lay their head, a squad of stealthy Judean soldiers (trying to pass ninjas) jump down from the dark attempting to end their lives in retribution for the murder at and defilement of the sacred temple.

Blades fly, glass shatters, blood squelches. As their brief fight comes to a nasty end, the father and son duo introduced at the end of part three comes upon the scene. We don’t learn their names yet, but they know Aquila and his “legion-rat” friend. They do some dry introductions and get acquainted, sharing some of their adventures and how they all came to be here. We get a nice and scary close to this week’s chapter as well. Get ready for some hellish fun on the way. Goddard and Bowland’s work continues to nail the tone and emotions throughout. Whether we’re looking at a conversation, a bloody fight, or something from the underworld. It’s all great and nicely detailed.

“Aquila: The Burning Fields” Part 4 is quick, violent, and fairly fun. The change in the scripting is a little odd, but by no means bad. Lots of setting for coming events and I, for one, am looking to what comes next.

Greg Lincoln: Rob Williams makes some formal introductions in this part as we get to know Hershey’s guide in Commu 13 Rijkaard, the man how picked her up and apparently set some balls rolling in town. Williams also lets us know that a cartel is a cartel and uses fully recognizable. He gives us ample chance to experience the brutal authoritarian setting that Hershey has but herself in as she continues her decline. If nothing else her fixer for lack of a better term at least seems to have some compassion for this once chief judge in pain. Williams is still doing story set up, but doing it deftly. We get more ideas about what Smiley was doing and get another player in Hershey’s camp from an unexpected quarter. Other then that we’re getting little more then just the lay of the land so far.

Simon Fraser uses his limited palette and varied line work this week to create so much impact I. This week’s installment. There are a lot of impactful quite moment in this story, the expressions he brings to the unique distinct faces communicate as much as the words they occasionally say and his use of forces perspective brings the pages to,life despite the unnatural light and color. “Hershey” is a striking reading experience, it’s disturbing and hopeful at the same time, hopeful in the case of some justice being served.