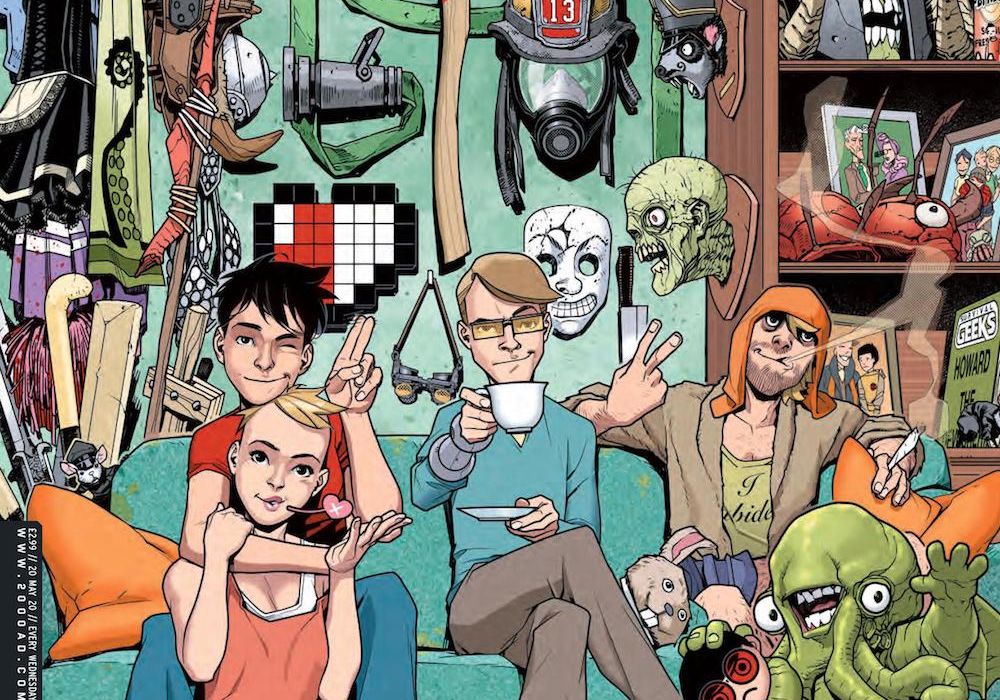 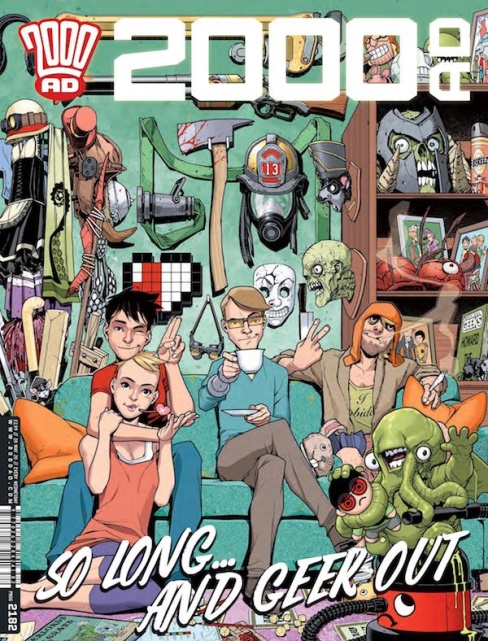 Michael Mazzacane: Judge Dredd has to deal with some monkey business, or maybe he’s just being made to look foolish. ‘Chimpsky’s Law’ comes to a conclusion as Noam enacts the final part of his master plan. It’s to the creative team’s credit that they effectively made for a real sense of drama as Noam escapes Dredd, dodging bullets along the way. Niemand has Noam count along with each number getting more unlikely until wham! And the reader is left with a feeling of dread, that maybe Noam won’t make it out alive.

One of the more enjoyable aspects of reading “2000 A.D.” is seeing how the creative teams, primarily the art team, work with the limited space of a Prog strip. They have to get a lot of information across in very few pages, panels even. The opening page to the finale of ‘Chimpsky’s Law’ manages to serve these masters and be entertaining. In the opening page Noam is running circles around Dredd. At least, that is the impression created by PJ Holden’s page design and panel content. He takes the first three panels and makes them function like a triangle, all leaning into one another, so that with a hint of perspective and classic Spider-Man technique you open on this wild image of Dredd firing at a monkey … in a monkey mask and it works. It’s hilarious and electrifying.

Holden shows a real knack for tracking Noam’s body in motion so that even when the backgrounds do drop out for a few spotlight panels the feeling and ability to track the chase that is occurring doesn’t go away.

There are also just some plainly funny visual gags here that skewer the living legend of the law. Holden’s more graphic approach to line work when mixed with Winter’s coloring give this strip the right amount of excess. It still looks and feels like a MegaCity strip, but there’s just a bit of fun being had at their expense.

‘Chimpsky’s Law’ wraps up with an effective strip tying together lose ends and keeping tonal consistency despite going to some ludicrous places in spots. 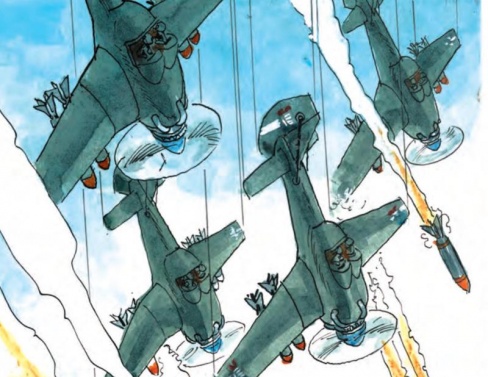 Rowan Grover: “Inbetween Days” works as a pretty good interlude for the series at large, giving us just enough content to satiate and intrigue us for the next ongoing. KEK-W keeps the tone of 18th Century revolutionary France consistent here, whilst injecting a nice amount of steampunk-esque futurism. This also makes for a lot of brutally quiet battles, with the standout moment being the horseback soldiers failing tremendously against a battalion of tanks and armed gunmen. The final scene with Francis Bacon is also a great way to show some of the major players of the series and catch us up to their antics in a succinct manner. The way that he interrogates Ritterstahl makes him appear as a passionate man but his words have such a sinister bite to them at the same time. With this final scene, KEK-W sets up an intriguing setting for the next series to build upon that ties the disturbingly cyborg-esque Bacon to the main plot.

Burns’ art is always classical and affectionately rendered, and this is still the case in this short burst of a story. The first page captures the chaotic divide between Renaissance era style and a more futuristic themed warfare. King Leopold is performing a bombastic speech, whilst two panels later, fighter jets are raining down missile after missile, visually detailing what this series is all about in the space of about three panels. The shots of the tanks demolishing their way through ground soldiers is a terrifying shot too, with soldiers running away fearfully almost in a riff off the gangsters on the “Action Comics #1” cover. Burns’ also renders Francis Bacon’s automaton with a terrific kinetic energy. He picks up slabs of debris and generally menaces the panels like an old school Jack Kirby creation, and brings a great classic comics feel to the prog.

This installment of “The Order” works well as a bridge between series, setting up new ideas and bringing others to a satisfying climax. I’m intrigued to see where this goes once the series restarts in two weeks. 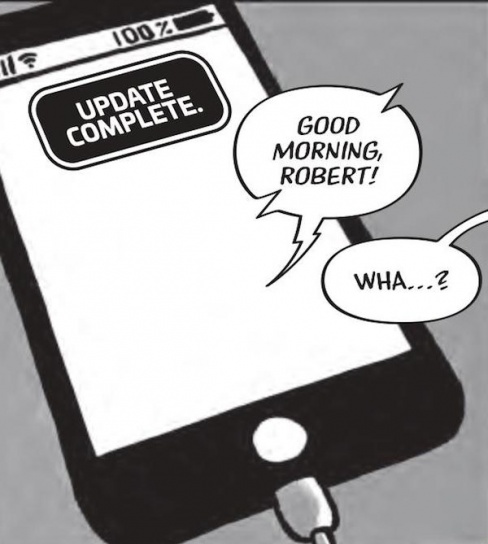 Brian Salvatore: This “Future Shocks” installment can easily be compared to Spike Jonze’s Her, and the resulting strip, though enjoyable, fails to reach Her‘s heights, if only because of the predictability. Johnson’s script starts off with a cell phone operating system updating, and the OS speaking to its owner, Robert. The OS begins to attempt to ‘fix’ Robert’s life, starting off by setting him up with someone from a dating app.

Eventually, of course, this all breaks bad. As mentioned earlier, every beat is somewhat telegraphed, but it doesn’t make the strip nay less enjoyable. Henley’s art is clean and expressive, and reflects the sense of order that the OS wants to arrange Robert’s life into. The strip’s climax reveals that there is a love story underpinning the strip, and there’s a very cute, Twilight Zone-inspired ending that fits into how most “Future Shocks” wrap up. But, despite the, perhaps, expected contents, this was a fun, breezy read that, like so much great art, questions the technology we’ve come to rely on. 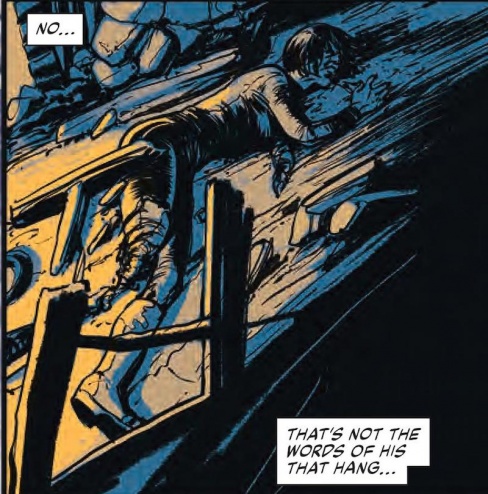 Greg Lincoln: Rob Williams created a pretty solid story with this first arc of “Hershey.” Dead to the world she’s proving to be dangerous to the network of ghost Judges and cabals put together by Judge Smiley. Though Falcoa seems to have a surprise or two in store for Hershey’s partner in revolution, Frank, she’s seems throughly un-phased by the “powers” he has be given by the encaladus energy as she stands him down in a one to new face off in this chapter. It’s a quick fight as she has one last surprise for him in store and it’s a thoroughly satisfying end that she delivers to his reign. Williams gets right to the heart of things with this chapter, he leaves no doubt that she succeeds in her “last mission” but leaves fully up in the air if it’s in fact her last. The final words about not knowing how she is to Frank leave us to wonder where her final journey will take her and if this is in fact the last we have seen of the Once Chief Judge taking her long walk of sorts.

Simon Fraser has put so much solid, powerful, emotional packed art into the strip this final chapter even if it feels a little short. Perhaps it’s the few panels of Falcoa where the perspective is a little wonky that throws the pages off but it’s not as solid as some of the previous chapters. His colors are no less impactful then before but there is something visually just a touch flat this time. He only suffers here he comparison to his own lovely art. I can’t fault him much given the strength and power in his pages across the full spread of this stunning tale. Hershey has been around near as long as Dredd himself and Fraser did a lovely job of renewing her image for this new arc in her storytelling life.

Gustavo S. Lodi: And with this chapter, the current arc of “Survival Geeks” comes to a satisfying end, despite the ups and downs that have often been the source of criticism on this column. Gladly, it is a high note – even if not the highest of the series – which is absolutely consistent with the tone and plot readers have become used by now.

‘Crisis of Inifinite Nerds’ have been about poking fun at the tropes of comic book storytelling, especially those linked with line-wide events, and, to a lesser extent, the absurdity of nerd fandom as a whole.

Without going into spoilers, this final chapter of “Survival Geeks” works so well because it pulls the rug on readers, despite their receiving notion of how these events would normally work, the huge deus ex-machinas that are commonplace, and the ultimate reveals that are honestly nonsensical if explored with any grounding on reality.

But it works. It clicks with its audience precisely of how common it has become, and, especially on this issue, to how dialogues were well-written to make it seem seamless.

All in all, “Survival Geeks” suffered a lot from inconsistency, with certain chapters feeling too much like filler for its own good. But looking at the whole, from the current vantage point, it really is stronger than the sum of its parts.