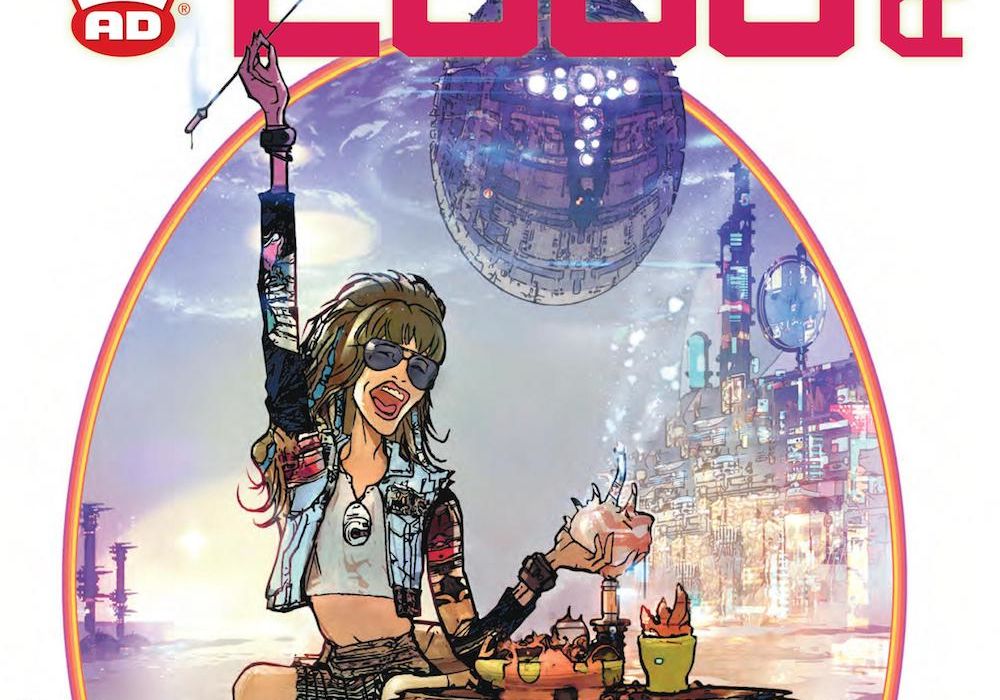 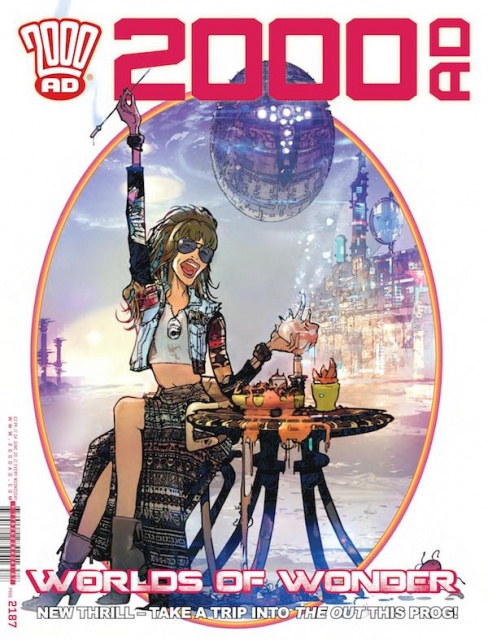 Michael Mazzacane: The creative teams mastery of pace and tone is the strongest element of the strip thus far. Previous entries have been setup and effective mood pieces, but I wouldn’t call them overall good strips. MacNeil’s art and Williams script work together to make big and small moments land as characters begin to interact with one another and the plot pick up and give us the first overall good strip of ‘End of Days.’

This effective use of pace is shown in the second page as Azrael makes Anderson an offer. The page design itself isn’t hyper stylized, MacNeil shows how you can create style with basic geometry on the first page as they constantly change perspective to create the sense of fright and tension. It’s really basic actually the most important moment is the largest, a close up of Azrael’s monologuing head flanked in dialog. Our understanding of those rules of storytelling, however, is what allows Williams and MacNeil to subvert the moment for comedy as Anderson flatly rejects Azrael’s devlish bargain with “Mama Anderson didn’t raise no sucker.”

The strip introduces us to the rest of the handpicked squad Dredd brought along: Judge Jonas, Patrick, Wan and Giant Jr. . I recognize a few of these characters, the ones I don’t are given enough quick exposition to explain their importance. Most of these characters and the cowboy get at least some level of spotlight as the hunt for Famine begins.

I haven’t been overly impressed by Williams turn on “Dredd” thus far, it isn’t bad but it hasn’t exactly grabbed me yet. This is the first strip that has turned my curiosity to attention and it’s on the back of smart craftsmanship that you would hope to find in something like a Prog strip. 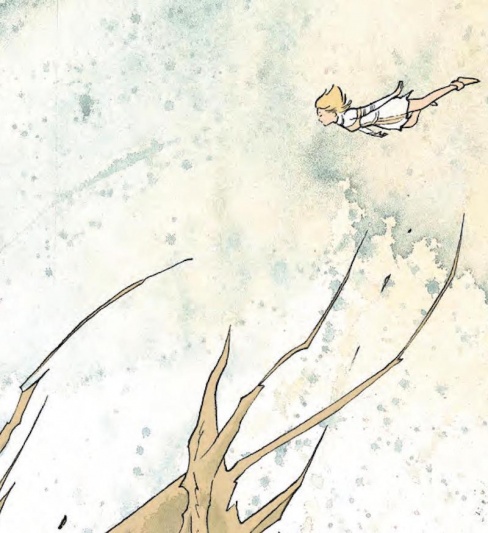 Matthew Blair: “Full Tilt Boogie” #3 is two radically different stories written back to back. It opens with a group of brave, although not entirely willing, volunteers putting on some sort of advanced armor and going off to fight for the greater good. It’s followed very quickly by a prisoner exchange gone terribly wrong that threatens to descend into zany, manic, over the top violence.

It will be interesting to see if and how these two stories will collide.

While previous instalments of Alex de Campi’s story have cast some doubt on whether or not she is comfortable creating comics in this short yet constant format, “Full Tilt Boogie” #3 is the point where things start to come together and make sense. She does a great job of humanizing the five volunteers who have become knights for the Empire, and even though they wield powerful armor and weapons they’re still very much nervous and confused. Meanwhile, the prisoner exchange shows a manic and near psychotic fan girl who will do whatever it takes to get her dream crush in her hands, even if it means killing the story’s bounty hunters to get it. It’s a well written portion of the story that does a great job of solidifying the characters, situations, and lays the foundation for future stories.

Eduardo Ocana’s artwork in “Full Tilt Boogie” #3 does a great job of highlighting the aesthetic and thematic differences between the two stories. The knights are bathed in a calming gold and white color scheme that showcases the somber tone of their situation while the bounty hunters and fan girl scene is black and the closest thing to dirty that seems to exist in this world. If there is one problem it’s that Ocana’s art is a little too clean and neat for certain parts of the story. One would imagine that a rabid fangirl could have been drawn with more exaggerated features like a lot of other manga wind up doing, but the art still looks good and maintains the unique flair that makes it so interesting. 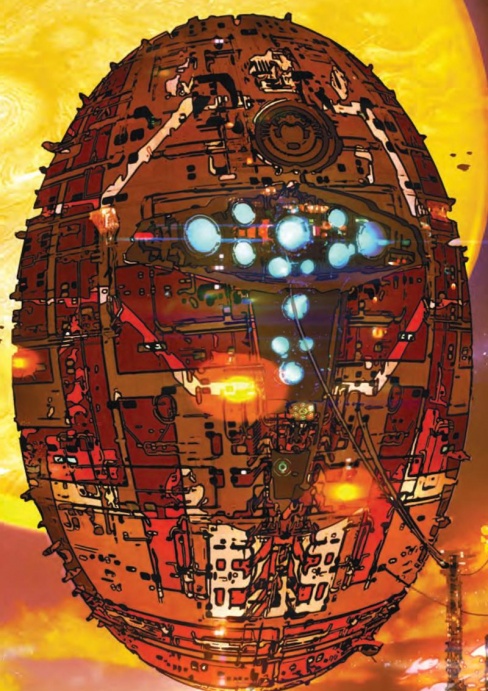 Brian Salvatore: We’ve all tried to run away from problems before, some more seriously than others. Cyd, the main character of “The Out,” ran so far that she doesn’t have a way back. She’s so far from Earth that people have never seen a human or heard of Earth before. At times, that can seem like an appealing situation.

What makes the situation more appealing is the absolutely stunning artwork by Mark Harrison, who mixes the beautiful, the weird, and the familiar (a Blue Meanie from Yellow Submarine is featured prominently outside a bar) into a slurry of exotic imagery. By making Cyd a photographer, writer Dan Abnett allows Harrison to pause and showcase individuals, sunsets, and moon eclipses, further showing the uniqueness of Hynassa Tzo. This strip never sacrifices the weird or unique features, nor does it remove the natural beauty, and so the world feels incredibly lived in.

The issue with this strip is that, while beautiful, there is nothing to grab the reader from a storytelling perspective. We know Cyd has had a bad breakup – who hasn’t? – and is far from home. But a little plotting would’ve gone a long way here, and although the art is enough to bring me back, I’d be chomping at the bit if it were just a little more enticing. 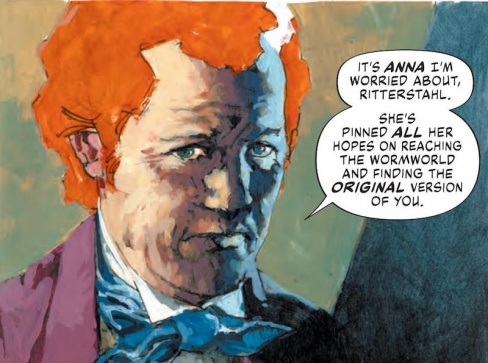 Rowan Grover: KEK-W delivers a lot of high concepts in this chapter of “The Order”, but seems to dart too frequently between them and past story threads to deliver an easily followed narrative. The dichotomy between Mr Calhoun’s machine intelligence and his natural self is interesting to start the series off with, but the story moves back onto Benjamin Franklin before this back-and-forth can gain any traction. Thankfully, the content that the Franklin scenes provide are interesting and thought-provoking, with some solid character development too. I love Mr Webb’s remark about the potential for immortality in “Some people. They grow old, get sick of the sight of their own reflection” as it feels perfectly within character for someone of that era AND the high-concept sci-fi, dimension hopping part of this book. The book eventually switches back to Francis Bacon’s appearance from the last “The Order” series, which is short and jarring at this stage, though I assume it will carry into the next prog and be fleshed out more.

John Burns can deliver a gorgeous script like few others can, but you’ve gotta believe me when I say this specific chapter is capital-G Gorgeous. Everything in these few pages is visually diverse and stunning in individual ways. The first page has panel shots of Mr Calhoun talking with his machine intelligence, and each one looks like they could be renaissance portraits. The following page comes out swinging even harder, with a three-quarter splash that details the revolution’s base in a lush green lake, with the overhead camera showing us great details like giant mechanic golems stomping around next to horses and carts. The conversation between Franklin and Mr Webb might be the weakest sequence of the book with occasional muddled detailing on the former’s face, but it still has some great body language and facial acting. It’s a stunning chapter that should grab any curious passerby’s attention.

“The Order” feels a little more confusing this time around, but the beautiful visuals more than make up for the multiple narrative threads being thrown at the readers. If I had Burns’ art to look at in every comic, I would definitely take the time to read and fully comprehend the dialogue at the same time. 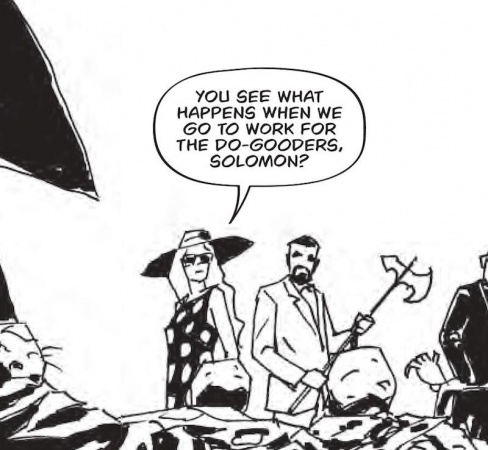 Greg Lincoln: Gordon Rennie seems to be building a new team as the chapters move along. The risen zombies don’t last long once Jen lets loose with some demonic energy consecrated ground be damned, I guess. British writers like to play with meaning and words and apparently so do Solomon and Jen as they play by the letter of the commands of their new partners and having stopped Salvatore the ossaphage Jen is more interested in what he is then killing him. The almost instant impulse to shoot a selfie with their new friend plays well into the dry sarcastic humor tone that Rennie has established. New week promises more new victims for this growing team, it will be interesting to see if they get to come on along as the story grows.

Don Reardon has a flare in using great swaths of flat blacks to define a page, set a scene and tell a story. Creating characters that identify themselves by their silhouette alone is a skill and he’s done it quite well with these four. As with the previous chapters, Jen steals a lot of the scenes and in this one Salvatore joins her with being the visual “bright” points. Given they are visually up against a pretty the plain Dr Strange like Solomon and the human priest Brother Liam, they don’t have much competition for visual interest.