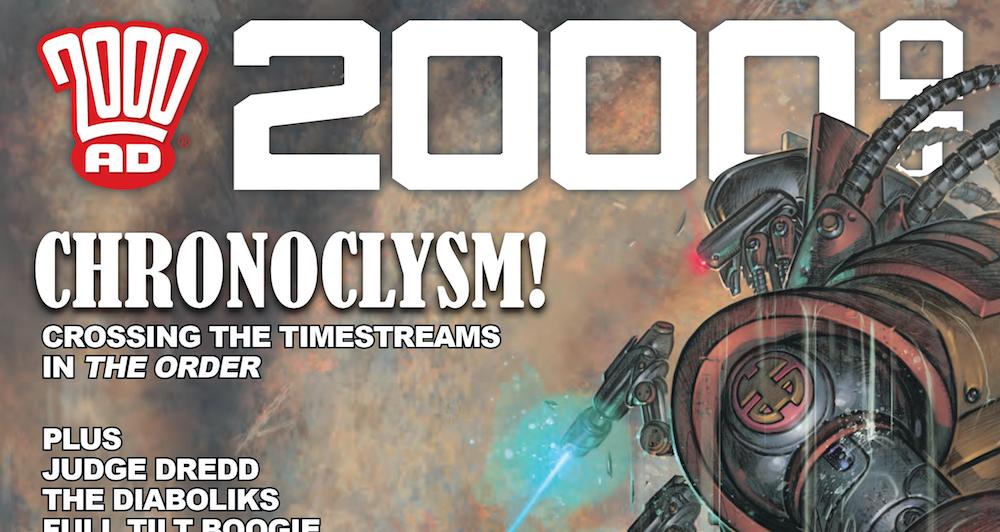 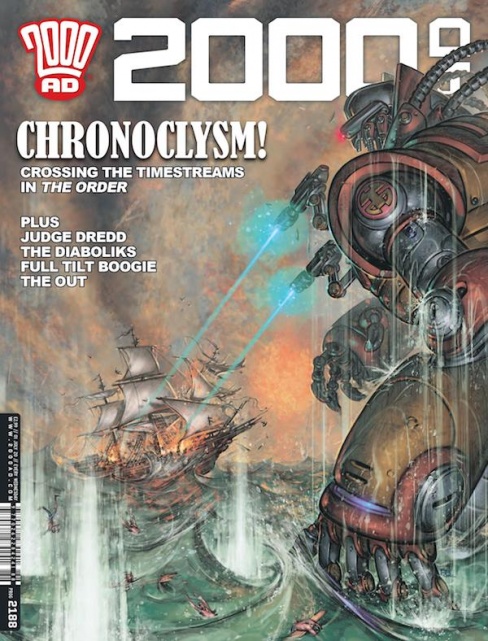 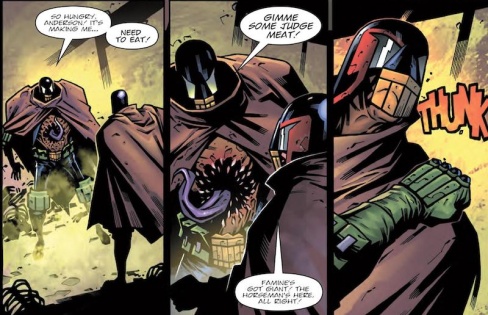 Michael Mazzacane: Things go from worst to even worse for Dredd and his task force as they begin the hunt for the Horseman Famine. Before they even really confront the guy it already has taken out Judge Giant and others soon fall. The compressed and limited page budget of a Prog strip is too the creative teams benefit for this segment of plot. The slow dissolution of the team could easily have been a strip or issue unto itself, as they slowly get picked away. First Giant, than Wan, until finally Anderson starts showing signs of possession. Instead of taking place over the span of months or weeks it happens in all of 3 pages! There is a bit of clumsy storytelling in this strip but it overall works at ratcheting up the tension for when we finally meet Famine.

Williams and MacNeil do a smart little bit of world building in the span of three panels that reinforce how the Horseman operate and why Famine chose Auster block to manifest. Auster is likely a reference to something culturally British but it also resembles austerity the term for slashed budget. The people of Auster block were the poorest of the poor and in a bit of black comedy experimented on by a process that shot energy into their body so they no longer had to eat. They felt energetic and lively but always hungry, which feels like a classic sort of Dredd twist. Famine and the Horsemen are not like Dark Judges, they manifest themselves in exploiting something we are already doing. In these three panels the creative team brings everything together, justifying both plot and the core thematics of the story.

That sort of excellent storytelling is contrasted with some clumsy visual work by Colin MacNeil. Judges are supposed to look the same, we only recognize Dredd because we’ve seen him so much and MacNeil continues to draw him primarily in abstracted silhouettes. Everyone else on the team looks pretty much the same, Mechanismo aside. So when Giant and Wan start getting hungry and Anderson is caught in the middle, it is plainly hard to figure out who is who and what’s going on. Williams and letter Simon Bowland try to guide the reader by calling out names but it doesn’t help as much as you would think. Wan and Giant succumbing to Famine is a relatively short sequence but it doesn’t work as that tense moment of action in the way the strip wants it to be.

Using a splash page to introduce Famine also feels a bit inelegant. MacNeil has shown good page design in previous strips with plenty of large anchor images, just ending the strip on the one final image feels like Williams had a page to fill instead of using every inch of the page. 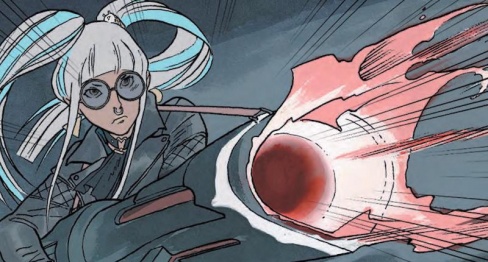 Matthew Blair: “Full Tilt Boogie” #4 takes a departure from the usual format that we’ve seen in the story and chooses to focus on one part of the adventure. Specifically, it focuses on the down on her luck bounty hunter and her problems with the escaped prince. It’s an interesting direction to take the story and the characters, but it’s not necessarily a good one.

While the feeling that writer Alex de Campi isn’t very comfortable with this style of longer stories being broken up into small chunks was somewhat present in previous installments, it’s a full blown problem in “Full Tilt Boogie” #4. Campi chooses to focus most of the limited page space on a single action scene with a brief page for showing the aftermath of the fight and setting up what happens next. Also, the first couple parts of the story set themselves up as a grand and epic fight against good and evil with the fate of the universe at stake, and this part of the story feels too small, too personal, and too silly to fit into the narrative. The action is still good, but there’s a very real sense that the creators aren’t comfortable with the story format.

Eduardo Ocana’s artwork on “Full Tilt Boogie” #4 is still good, but it’s becoming clear that there’s something lacking. The anime influences are very clear on the characters and the way they behave, but a lot of the energy that readers get from the hyperactive fan girl anime trope doesn’t feel present. On a technical level the artwork is still very good, and it has a look and feel that is still very unique to this particular story, it just feels like there’s something extra that should be there but isn’t. To be clear, everything is still well laid out and it all looks pretty, it’s just missing something intangible that makes good art great.

“Full Tilt Boogie” #4 is definite proof that this story would probably be better off as a traditional comic book series or graphic novel. It’s still has the engaging characters and original set pieces, but it needs to raise the stakes and energy of the characters if it wants to continue being a good comitt hc. 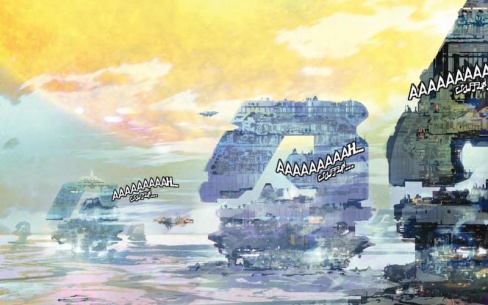 Brian Salvatore: After last week’s strip having little or no forward momentum, chapter 2 of “The Out” more than made up for it, by giving Cyd an instant challenge and objective that should add some shape to the strip. While the gorgeous landscapes and curious creatures created by Mark Harrison are engaging, they work much better when connected to some plotting.

Dan Abnett spent a good chunk of the first chapter letting us know that Cyd got off Earth in a hurry and doesn’t want to return. This chapter reveals that the ‘no going home’ part was more bravado and posturing than it was truth. That was suggested in the subtext of the first chapter, but having it be more clear helps establish Cyd as a more sympathetic character.

Abnett also shows that, while the Out is strange, it isn’t necessarily evil or more dangerous than what we’re used to. For essentially having non-payment for her trip off-planet, Cyd isn’t scolded or arrested (or killed for trying to buy something with insufficient funds), but rather simply turned away. When she presents her problems to a bartender, they hire her instead of kick her out of the bar. It’s nice to see a story take place somewhere that isn’t an auto-dystopia, just trying to make things as bleak as can be.

Rowan Grover: This chapter goes nicely into the backstory of Captain Belair and how she’s become involved in the conflict of this story. KEK-W balances his role in narrating this story really well, giving Belair’s narration just enough to frame the context of each panel so that the artwork can fill in the rest. It’s a great role reversal in terms of gender politics too, as it has Belair spurned on into being a revolutionary via the death of her husband. KEK-W also paces this backstory out really well, giving us just the most important and emotional points to make it feel poignant enough that we can empathize with the character. The arrival of Francis Bacon’s forces after this is a great way to resume the action-packed pacing also. It not only gives Belair some great action-hero dialogue moments but also delivers a great cheesy tone with Franklin’s dramatic realization at the end of the prog.

Burns’ artwork does some great work in delivering a story that looks and feels like a flashback in the way that it is told. The way that bright colors are used against a more sepia background gives a great sense of reflection and history yet clearly shows us who is meant to be the focus of these panels without them directly talking. There’s also a great use of panel structure and breaking it when guns fly over the borders of the page or the colonists’ ship is upended in the ocean across a panel border, showing the significance of the moment. The action sequence after the flashback is tight and well-populated as well, giving a real sense of tension. I do think the way that Bacon’s robot moves within the scene is a little awkward, however, and takes away a lot of the menacing potential he has.

“The Order” continues to deliver a great character-focused story whilst filling in interesting world details in-between. The team still understands the ridiculousness of their premise and runs with it unashamedly.

Greg Lincoln: This week see the launch of a new story arc and looks like the quartet might just becoming a quintet with the lecherous PI Damien Dellamore being introduced and brought in. Gordon Rennie dives right into a montage and manage summary multiple cases of the private and the privates investigator. Somehow this series of events have a Big Lebowski kind of tone to it, that might have come from the phone call doodle that he makes or the shock he gets at the end after a series of salacious affairs. It’s an amusing and interesting side story but really does not drive the story forward much other then expand our cast of ne’er-do-wells. Rennie does little to explain things about the paranormal investigator but is pretty clear that he has some preternatural skills and knowledge and polyamorous nature.

Don Reardon makes the various one shot character and locals interesting. He makes the backgrounds for these incidental trysts lived looking. The clients have cluttered living spaces, collect art and artifacts or possess great libraries of books. It’s all window dressing but it adds details to what otherwise would be a throw away moment leading to the arrival of Jen Solomon and their growing group of partners.