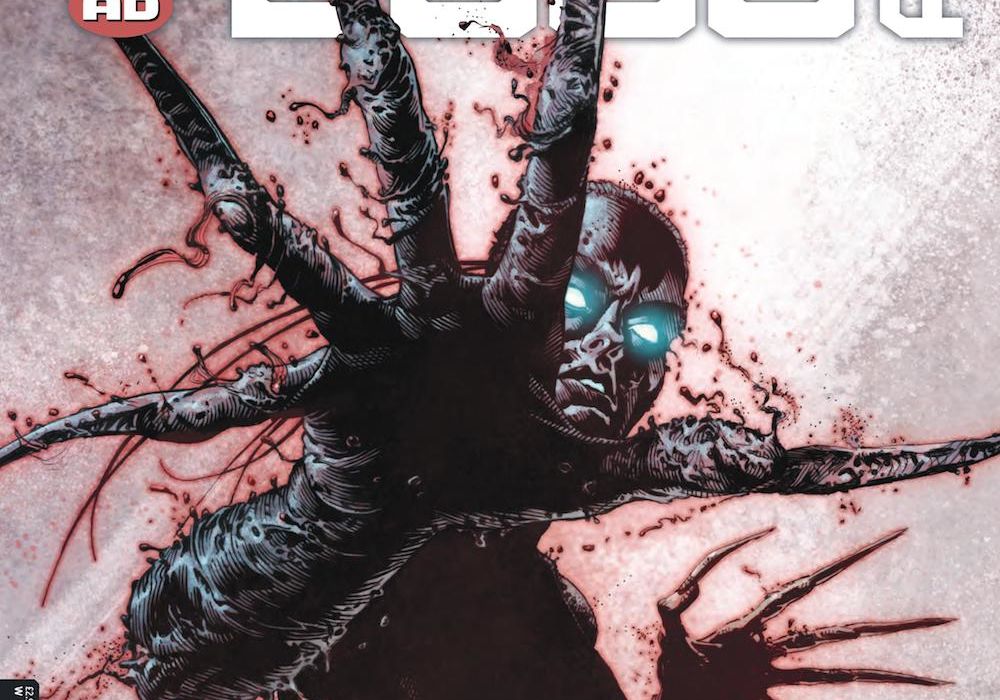 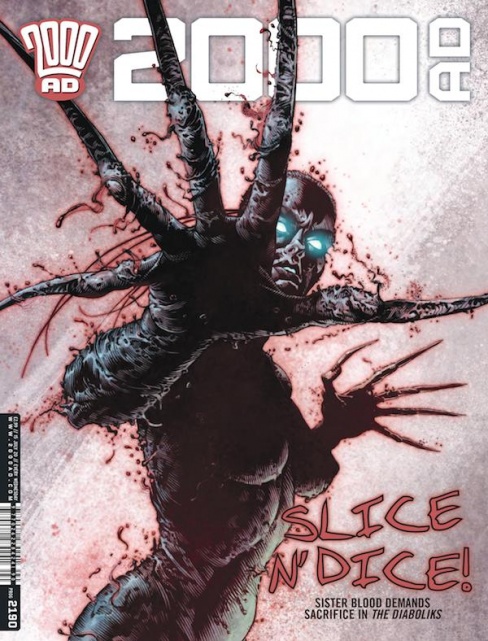 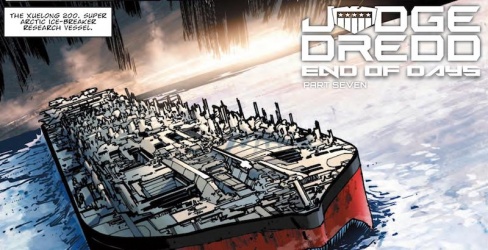 Michael Mazzacane: The seventh part of ‘End of Days’ brings a slight shift in creative team as Henry Flint replaces Colin MacNeil on line art. Even with the same colorist, Chris Blythe, the difference in how they draw both from a use of line and compositional perspective is great and somewhat distracting. Flint gives the Judges an exaggerated physique with pencil thin long arms and torsos, like a less refined Frank Quietly. It fits for Judge Dredd who is getting on in years and supposed to be different, but when it is everyone else it is just an aesthetic choice. They also do not employ spot blacks in the same way giving MacNeil’s palette more room to work and overall brightening up the image. These differences do create an interesting tension between propagandistic legend in Williams script, which references the ‘Necropolis’ storyline, and the tired piece of crudd of a human being Dredd is drawn like.

This isn’t entirely due to the switch in artists, but this strip marks a shift in how Dredd is treated. Where he was previously in the center of things with his own internal monologue, the reader is locked out of his thoughts. Most of this strip is built around Judge Giant jr. and his relationship too Dredd, not his relationship with Dredd. Treating Dredd in this way is one of the more interesting twists on the character in the past 5 or so years. It is interesting to see Williams who is clearly influenced the earlier mega epics like ‘Judge Child’ take this route with the character.

Overall the seventh entry into this arc isn’t much to write home about as it sets up the hunt for Pestilence. It ably moves those pieces around and perhaps has an indictment of Dredd and all he is and the Judges are good for embedded within it, but if that will bear dramatic fruit is unknown for another couple of weeks. 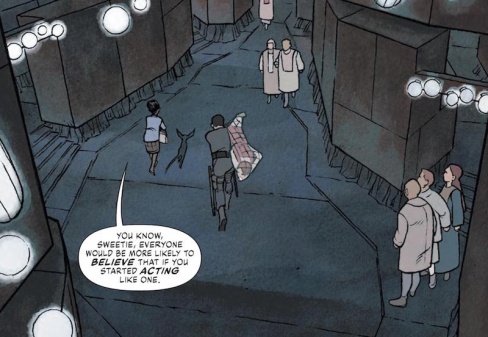 Matthew Blair: We’re back with the bounty hunters and the captured prince and we finally have a brief moment of contact with the knights. Things are finally coming together like the conventions for this kind of story foretold.

While previous reviews of this story have been critical of Alex de Campi’s pacing and her decisions over which parts of the stories get chopped up into sections and published, “Full Tilt Boogie” #6 is another example of her doing it fairly well. In this section of the story we get some good character development from the prince, we resolve the situation where the bounty hunter took over the planet, and we leave the planet and tease the eventual confrontation with the knights. While this part of the story does kind of cheapen the previous actions of the bounty hunter and her team by resolving their predicament a bit too quickly, it still strikes a nice balance between building on previous stories, being its own self contained story, and teasing future action.

Eduardo Ocana’s art in “Full Tilt Boogie” #6 takes a step back from the interesting world building that has dominated most of the previous stories and focuses on the characters and their emotions. Most of the stor2190.y is taken up by pages with a high panel count that focus on extreme close ups of the characters. While it doesn’t allow the artwork to breathe and give the audience a chance to see the world that the characters are living in, it allows Ocana’s artwork to highlight the simple yet highly emotional character design. It’s a good choice, allowing the audience to empathize with most of the characters in preparation for the coming conflict.

“Full Tilt Boogie” #6 is a solid, character driven piece of episodic storytelling that allows the reader to really care for the people involved before things start getting loud and violent, and while it could be said that certain problems are resolved a bit too quickly, it’s good to see that the story is continuing its forward momentum at a pace suited for a shorter, more episodic style of publishing. 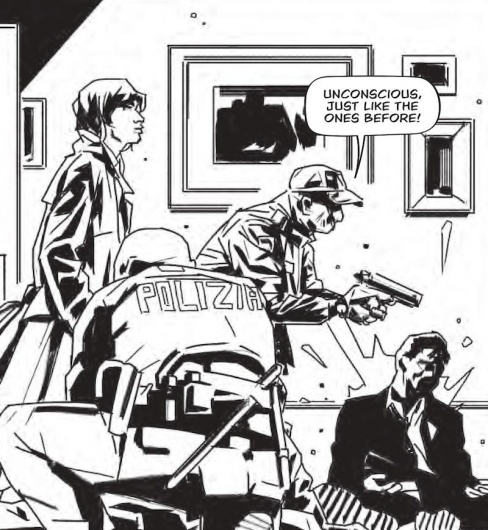 Greg Lincoln: ‘Profondo Rosso Part 3’ is a bit of a departure, as Gordon Rennie hits us with a lot of new characters and occult references, but little in the way of progress. The scene opens with the Polizia exploring an occult crime scene featuring the Hand of Glory and lots and lots of bodies. It’s a bit of a jump from our regular cast of motley anti-heroes. The police are not fazed by magic, thankfully, but the jump in storytelling seems a bit of detour. It fits as the story progresses because it’s a crime to lure the Red Madonna out by our heroes, but Rennie spends much of the strip setting the scene for their upcoming fight. Sure, the mob scene that closes the strip is both humorously staged and oddly unsettling, but it gives us little time to care about anyone that appears this week. It’s a needed explanation, but somehow it feels like a detour from things.

Antonio Fuso’s pages are well crafted. The spread showing Detective Daria using psychometry to “see” the crime was a well crafted scene, breaking the very standard comics paneling to display her otherworldly experience. Fuso creates a lot of interesting looking momentary characters for this week; we will likely not see any of them again, but it shows artistic effort that is worth taking the time to appreciate. This was a week of getting to the next important story beat, but Fuso makes a worthwhile trip. 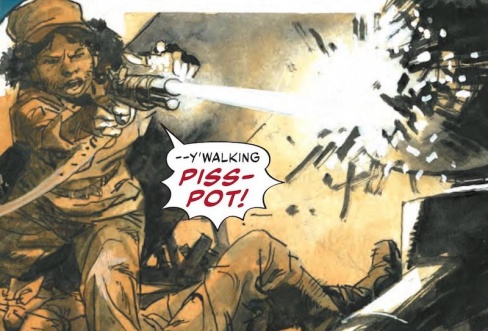 Rowan Grover: A bunch of plot threads converge somewhat in this chapter of “The Order”. There’s an emotional beat right from the get go with Cassi and Sim which kicks off a lot of Cassi’s actions in the prog, as she fights back against Bacon. KEK-W handles her dialogue terrifically as she spits out cusses at the robotic army and darts all around them. There’s not a moment to spare after this, however, as Clara and her Edge-Walker suit fight to protect Cassi in a moment that feels like a very human take on The Iron Giant. On top of that, we get some emotional struggle from Calhoun as he tries to reconcile with the fact that Clara is out there fighting and so many people are losing their lives. It’s a tiny bit too much to cram into the story that takes away from the impact of the other moments somewhat, though it does move the narrative forward.

If you read “The Order” in hopes of big, renaissance painting-like robot fights, you won’t be disappointed in this prog. We get a taste of it with Cassi shooting robots in her revenge-fueled rage, which is exciting enough watching her navigate a way through bolts of energy and between enemies. Once Clara in her Edge-Walker suit enters the fray, however, artist John Burns pulls back the camera on the frames enough so that we can get a sense of the enormity that this character brings to the fight. Her lasers feel very flashy and classic 70s Marvel style, which is a great touch too. There are some more human moments between the core cast, but we end on a panel of Clara wreaking destruction amidst Bacon’s robots, balancing the delicate painted sensibilities and more classic comic art style of Burns’ work.

“The Order” manages to deliver another satisfying entry in the series, yet this one tends to trip over its character weight somewhat. 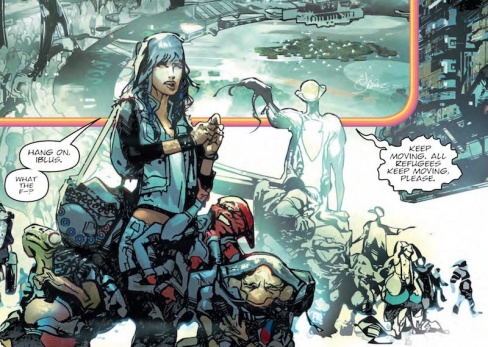 Brian Salvatore: The tonal shifts of “The Out” continue, with this issue seeing the full turn from ‘happily wandering space’ to ‘refugee from an unknown conflict.’ Despite the almost total change in atmosphere from the first part, “The Out” remains a fascinating read, and one that doesn’t manage to give too much cognitive whiplash in its tonal variance.

This installment allows Mark Harrison to really stretch his wings, as the refugees are from various planets and so have very distinctive and unusual looks. My favorite was a hooved dog of creature with an old man’s face on it. Sure, it’s a bit disturbing, but it was a really interesting design. This whole sequence allows Harrison to go buckwild, and it has a sneaky motive behind it, which is to make the appearance of another human all the more shocking.

Abnett’s script really sells this moment and, perhaps due to that, I am waiting for the reveal that this is Cyd’s ex, though I have no real evidence of that. But the build to the climax feels earned enough that ‘random human,’ which still a statistical anomaly, doesn’t seem quite significant enough for this moment. We’ll find out next week, I suppose.