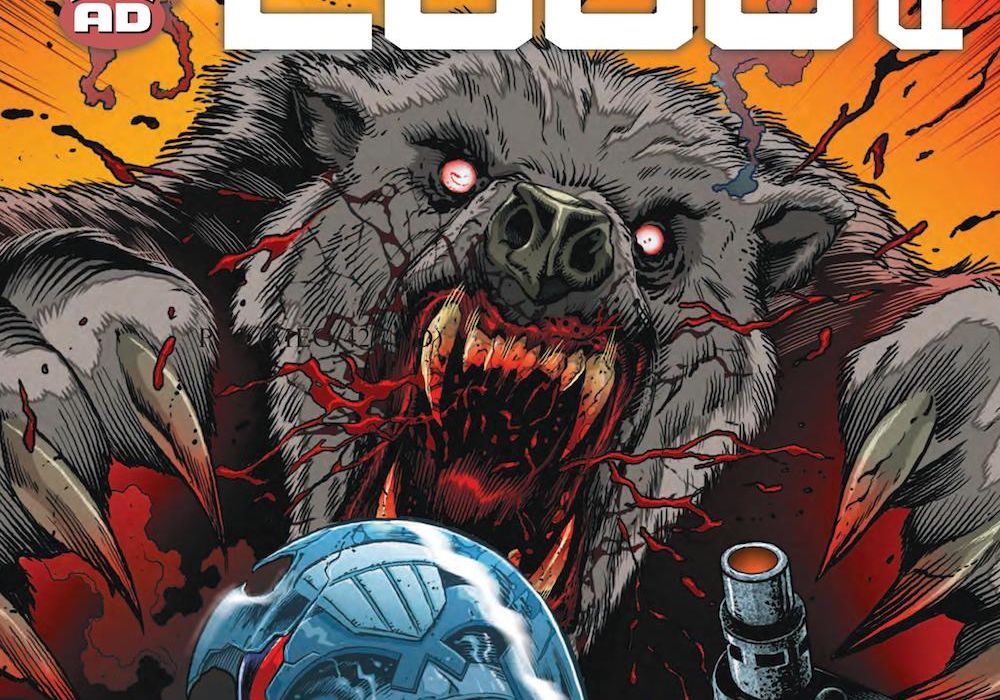 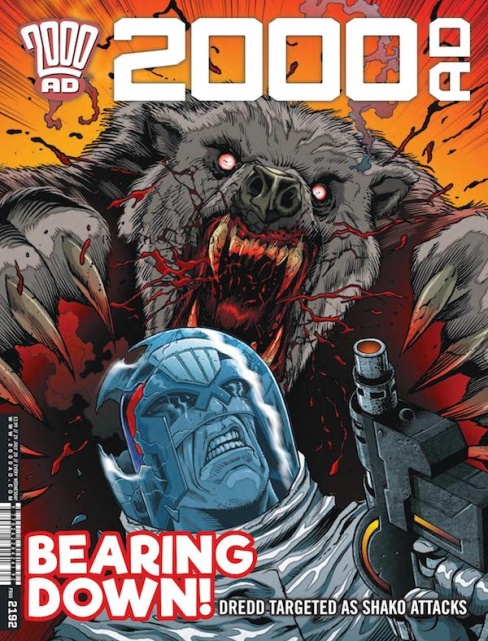 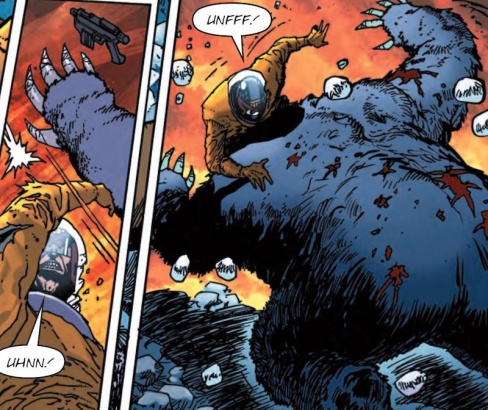 Michael Mazzacane: Pestilence is dispatched by the end of this issue, though it will likely linger as these things are wont to do. The manner in which Rob Williams and Henry Flint construct their exit, a somewhat comedic bit of Wile E. Coyote-esque trickery with handcuffs, gets to my only real complaint with this strip. How Flint has structured these pages, while functional, lack the impact their content is aiming for.

At the end of the previous strip, Dredd was staring down the zombie, demon, bear that adorns the cover to Prog 2192. In the strips opening page Flint recreates the similar energy and composition of both the final page form the previous strip and the cover by centering the page on the large image of a bear lunging at Dredd. This central image is flanked by four other panels. The lettering gets in the way of the page a bit by creating a left to right reading line instead of going in the pronounced ‘Z’ formation Flint has made with the art. This slight awkwardness aside the page is lively and creates a strong anchor image from which everything else animates.

In the next several pages Flint’s page compositions do not keep that cohesion that allows for these moments to have impact. In particular the second page fails to capitalize on these moments of impact, despite the use of angular rectangles to create a sense of instability. It comes down to how the sequencing plays Pestilence getting shot in the head. It’s the kind of moment that is played as a sudden moment of, futile, gun violence. It becomes part of a three panel sequence that highlights the futility of shooting this zombie-like creature through the head. The panel that starts this sequence and anchors the page, however, is not really built up. It is right at the top of the page, the second panel you will read. The moment is easily given away with a glance and so it lacks impact.

In terms of staging there is more of a choreographed feel to Flint’s paneling compared to Colin MacNeil’s earlier work. The paneling just gets in the way of allowing for an easier flow of the action. This entry in ‘End of Days,’ isn’t bad. Williams has clearly set up a rhythm with how these encounters are supposed to go. It just feels like it could’ve been a bit better with slight modification to how pages were designed. 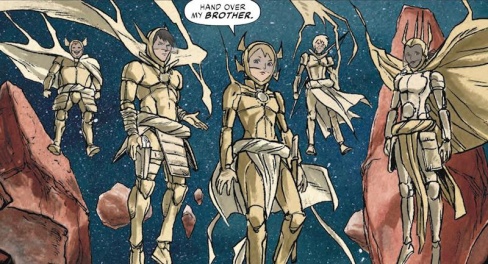 Matthew Blair: It’s the first direct contact that both sides have had with each other in the entire series. It’s fast paced, violent, and the supposedly good knights on the side of light and order aren’t acting like the cohesive and as noble as we’ve been led to think they are.

While Alex de Campi’s writing has had some difficulties with tying bits of story together in a cohesive whole and generating a sense of flow, “Full Tilt Boogie” #8 works on both counts on top of being a great bit of action and character interaction. De Campi does a great job of allowing each of the character’s personalities and motivations shine through in a brief, yet brutal, fight sequence where the supposed good guys display a surprising amount of immoral and disorganized behaviour while the smuggler and her supposed warrior of darkness simply want to get out of the situation alive. It ends on a well chosen cliffhanger that leaves the reader eager and desperate for wanting more.

Ocana gets to show off some complicated and serious action in “Full Tilt Boogie” #8 and he’s very good at it. Since the characters are on an asteroid with very little gravity, it would be easy to lose track of who’s doing with everyone bouncing around and trying to punch each other into space. Fortunately, Ocana does a great job of maintaining a sense of geography with nice big panels of action that keep the reader aware of what’s going on, who’s fighting who, and where everyone is in relation to each other. It’s a beautiful, creative, and well thought out fight scene that a lot of people who want to draw action heavy comics could learn from.

“Full Tilt Boogie” #8 puts the whole story back on track and manages to combine great action with great character development. It’s got the right amount of dialogue, a great sense of character movement and geography, and the right ending to keep people wanting more.

Greg Lincoln: Gordon Rennie may have pulled clever kind of a fast one on us this week. With so much build up to the fights between out motley group of supernatural assassins and the mob’s Red Madonna, no matter how well scripted and illustrated it is it could deliver on the promises they have made. He and Anthonio Fuso avoided that pitfall by skipping the whole thing. This week’s cold open with Damien in police custody as the only survivor/witness was both confusing and clever. He’s somehow immune to Detective Daria’s scrying ability so that battle that took 37 lives will forever be a mystery readers can only speculate on.

Fuso shows us on the pages as Rennie recounts the groups member that, yes they were there at the battle via evidence, that each had a part to play and that shown in the panels following Damien’s release that none are too worse for the wear. Jenny always steals the show, visually, with her demonic nature peeking through. She didn’t even need to peel away the Red Madonna’s face to revel herself. Readers have to wonder as to where Rennie is taking the story going forward, as the majority of crime is now in the pocket of the Malleus. 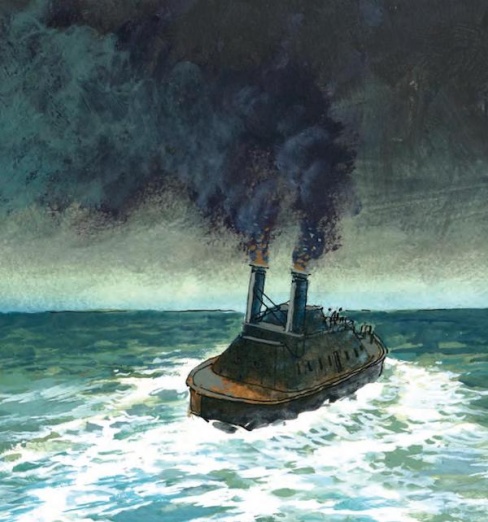 Rowan Grover: This week, things start to come to a dramatic climax in “The Order”. We start with a bit of a macro view of what’s going on, with the Master Engineer taking a voyeuristic look into what is taking place between the Order and Francis Bacon’s robot army, and alerting the latter of the former’s attempt to escape. It’s an odd way to open the issue especially since there’s no direct interaction or reply from Francis Bacon, we just see the reaction through his airplane gunning down our protagonists’ ship. From then on, we get some philosophical debate between Benjamin Franklin and Captain Belaire. At this point, Franklin is an interesting yet hopelessly passive character, whilst KEK-W seems to be building up Belair into the character you want to root for, which is a lot of fun. In the end, there’s a creepy moment with our beloved machine-brained Danny, which signals for some interesting things to come.

Burns gets to play with a much looser, line-driven style here which makes for some much more immediate and kinetic artwork. The shot of Strasbourg on the first page is filled with just enough detail to be interesting yet not overcrowded, which is good considering it doesn’t occupy too much of the prog. On the next page, Burns uses a great mix of loose linework and contrasting, shifting color palettes to convey intense emotion as Bacon’s fighter planes gun down The Order’s ship. Block color is also used superbly in the Franklin and Belair scene, especially with the former as he pauses in questioning what his role is within The Order, making the contemplative tone even more arresting. The only use of a more daubed, smudged paint style is at the end with Danny, which makes it deliberately vague in discerning what has happened to him, which makes me want to come back and figure it out next week!

“The Order” feels a little disjointed in trying to converge all its plot points at this stage in the story, but still delivers a potent, emotional and visually interesting entry this week. 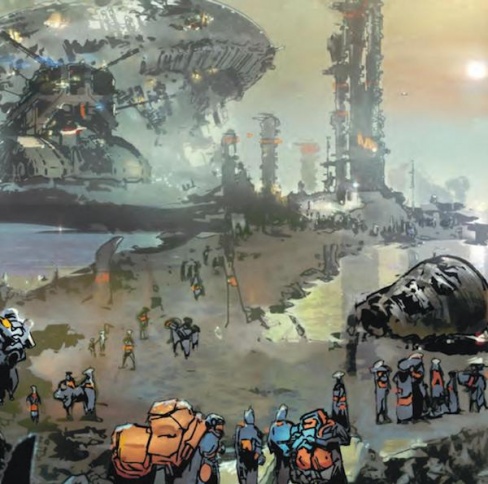 Brian Salvatore: It’s getting tiresome to say each week that the strip changed tones again, but I don’t know how to discuss “The Out” and not center it around the shifting nature of the narrative. At the end of last chapter, we saw Cyd join an aid party on a war-torn nation. Instead of placing her in conflict, Dan Abnett has her just behind the war, photographing burnt out vehicles and shattered neighborhoods. It is showing the effects of war without showing us the war itself.

This allows Mark Harrison to switch his art style a bit, from showing off either the gorgeous nature of the universe or the gaudy heights of what society can build, to spotlighting decay and destruction. We also get the clearest look at Cyd yet, in the chapter’s final image, a selfie she takes with some of her other companions. Harrison’s art continues to be the driver in this series, as he is able to convey a lot of emotion from his images, especially in chapters like this, where there is little interpersonal drama coming from its characters.