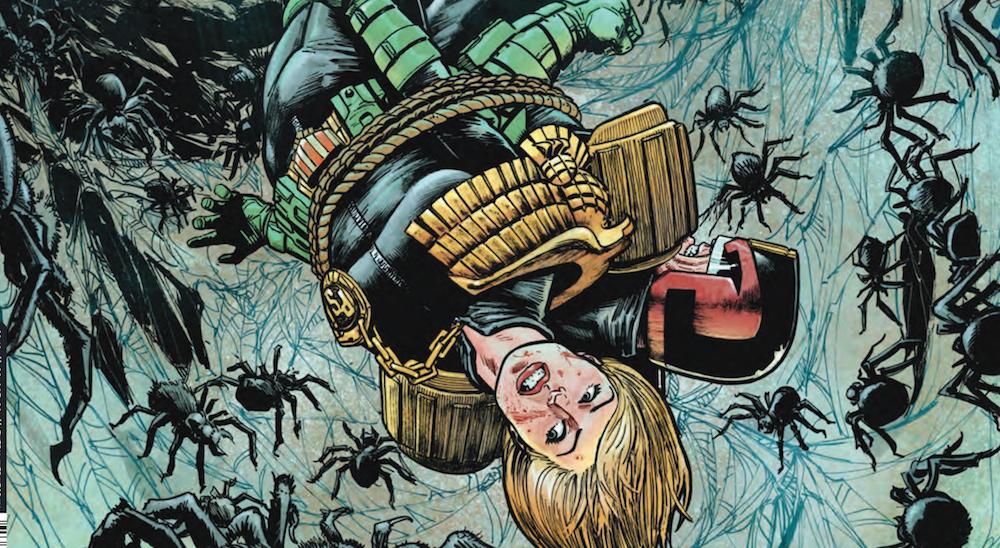 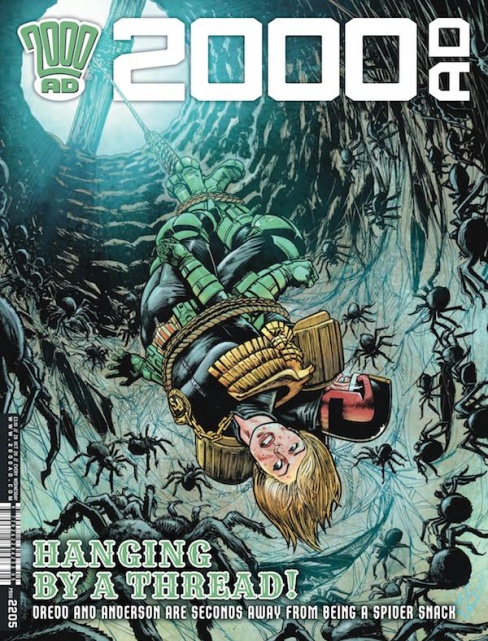 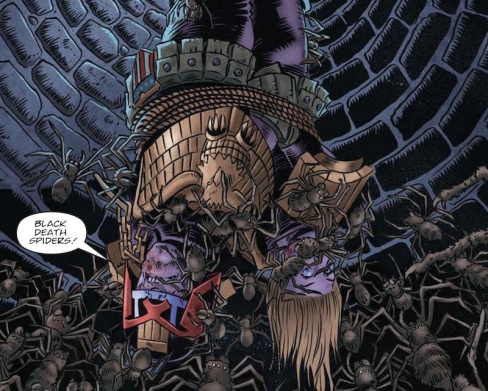 Noel Thorne: Out in the Cursed Earth, Dredd and Anderson’s monster hunt isn’t going so well – they’ve been captured by the Black Death Gang, tied up and lowered into a spider-infested well. It’s up to their talking horse to save them!

This is the only the second part of “They Shoot Talking Horses, Don’t They?” and yet we’re already at the end! Which is a shame as I thought this storyline had more legs than the last one, which unfortunately went on for twice as long. It’s a fast-moving tale full of action – it’s not the most amazing story but also not boring.

It’s hella contrived though! I mean, if Anderson can control the gang’s minds, why didn’t she do that initially to make them take her and Dredd out of the well? The talking horse comes across another talking horse – just when Dredd and Anderson need two horses for the chase (though it gives Dredd a chance to live up to the title)! Also, the gang just happens to have a whistle that happens to control these monsters from another dimension? Hmm.

The gang themselves feel very derivative of Mad Max’s War Boys, both in manner and appearance, while the leader Trunk’s magic whistle seemed similar to Yondu’s own magical toy from the Guardians of the Galaxy movies.

I enjoyed Dan Cornwell’s art. The spider scenes were pulled off really well, particularly given the challenge of drawing so many spiders at once, swarming people. The gang’s designs were the familiar ragtag bunch that always appear in Cursed Earth stories (bowler hats, Nazi-esque uniforms, chains, outsized shotguns), but I liked the detail of giving Trunk judges’ elbow/knee pads, hinting at what they’ve been up to in the past. Another small detail I appreciated was how the fleshy area of the Mouth-Hounds’ “face” contracts when it eats something – it shows Cornwell’s put some thought into these characters.

Jim Boswell’s colours were excellent. I loved the muted moonlit tone he gave everything, which set the atmosphere nicely – you can see the contrast on the final page too when they’re back in Mega-City One and the brightness makes the colours pop more. The sudden orange background for the violent sacrifice of the gang-member was a good choice to emphasise the horror too.

I feel like there could’ve been more explored here if Williams had more space. As it is, “They Shoot Talking Horses, Don’t They?” isn’t a bad little Dredd number but its brevity means that it doesn’t leave much of an impression – overall it’s a forgettable Dredd short. 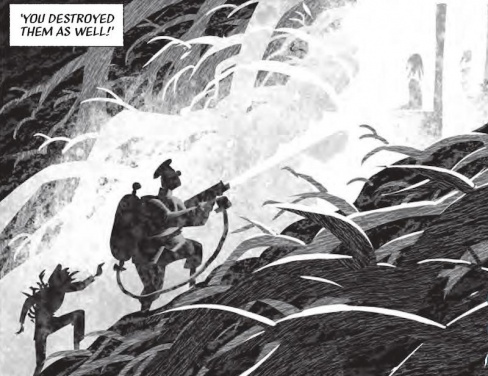 Michael Mazzacane: The sixth part of ‘New Jerusalem’ is a bit of a transitory strip to help propel the next batch of strips forward. While Edginton and D’Israeli spend most of their time on setup they still do a good job lacing character throughout as Stickleback-Holmes is forced to make a series of tough choices and strange bedfellows.

What’s worse than accidently killing a man? When that man is London itself, refuses to pass on from this mortal plane, and demands retribution. That is exactly the kind of person Stickleback’s new partner is, the man once known as Detective Valentine (see Prog 1525) who is at least looking verdant green instead of queasy green. The use of colorful description with D’Israeli’s wonderfully textured grey and black toned art is slightly discordant. It’s like in a classic black and white movie and they talk about a blue dress or article of clothing, it is disconnected from the way the audience actually sees the material. As with black and white film, “color” such as it is, is developed through the use of textures and hatchmarks. Two things D’Israeli has in spades this strip. Their design for the creature formally known as Detective Valentine is a delightful counterpart too Stickleback’s solidty and blacks.

Edgington plainly writes a good script in this entry. It isn’t overly showy, but every page features a decent bit of humor or gag. The dialog and narration push everything forward. It is just workman like and efficient. Is this the best entry in the strip? Not really but it is probably one of the best overall from an execution standpoint. 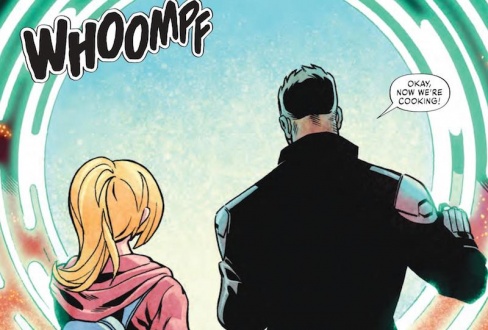 Ryan Pond: At this point in the “Hyperballad” story line, we have learned that some of the connections Nolan has made over the course of his life are going to either help or hurt him in his current predicament. We know Van Hess is plotting against him, but India’s status as a certified pop star and cash cow make you wonder why.

Peaty has penned a great story with India, constantly delivering turns and misdirections about her significance to this story. In the beginning, it was all a babysitting job, but we are getting to the point that she must be more important for another reason, and that is the question that Nolan finally asks here.

This was an action heavy issue, and Marshall once again delivers on great linework. As psychic abilities and future tech clash in this issue, there is never a question about what is going on. Teague again delivers brilliant color on red and blue backgrounds that help sort the action and clarify what two sides are at conflict here. Bowland tackles the letter work in a way that never interrupts the action and keeps your eye on a clear path from panel to panel. This much chaos is a group effort and this is perfect execution that leads to it staying on the rails like this.

“Hyperballad” has taken time to build a thoughtful story, and this sixth chapter does a great job of paying that off. In a world full of so many fun and unique elements, it is rare that we get to see so many on display in one Prog. Splices, lazer guns, psi abilities, and sci-fi tech all make an appearance in this issue as Nolan and India make an uncertain jump through a gateway. 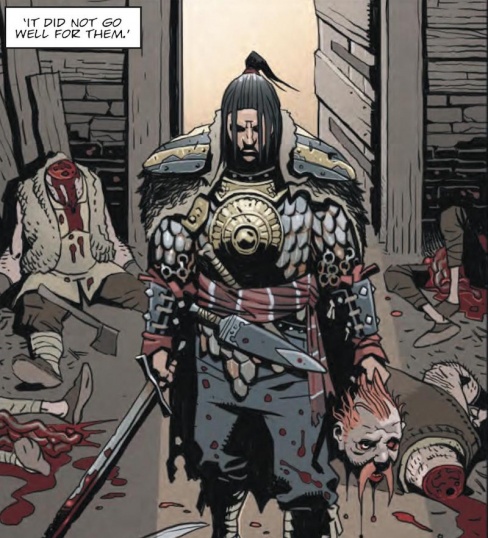 Greg Lincoln The story of the Constanta’s origin takes a leap to when he was a young man. Raised by wolves he saw the world as either predator or prey and that puts him at odds with the more civilized people around him. Ian Edginton brings in villagers who are horribly outclassed by our “hero” and then pits him against hired mercenaries. Even one such as him faced with a pack of predators is outclassed and nearly dies. This tale introduces us to another fairy tale element as the murderous band that nearly kills the Constanta is lead by a Troll.

The story this week may be a bit thinner then the earlier parts but Trevallion’s are makes up for the spareness of the narration. He makes the various hunting scenes interesting and suitably gore filled. The scene that accompanies the fate of the villagers who fought the constant leaves no doubt that he has little care for civil society or negotiation. Trevallion choice of colors under lighting the fight scene between Constanta and the murderers sent to kill him really fit the comic’s tone. Though it’s lit by fire which should be warm it still leans into the colder, bluer tones despite it being near fire. It created a great contrast and made for an interesting light to case the troll in when he appeared. The craggy features that Trevallion leans into with his art make his strip look like little else around at the moment. 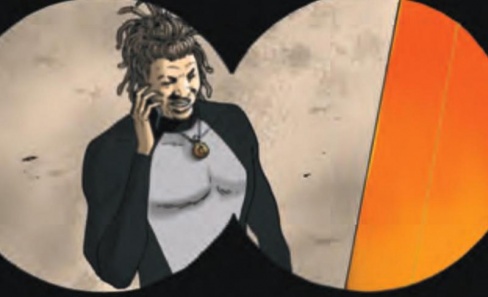 Rowan Grover: As always, this chapter of “Hook Jaw” starts off with an entertaining aside for the first age, where we see the craze of our mythical monster taking off within the general public, which is punctuated by the pitch perfect Youtuber saying “Don’t forget to subscribe to my channel!”. Worley then takes us quickly back to Jack, who’s on the phone to Morwenna before he gets ambushed by a group of thugs. Worley’s dialogue with these thugs is a little hamfisted, and weirdly paced. We see a sequence of panels depicting before and after Jack gets hit in the face, but we never see any moment that feels like it really indicates or lends enough time to the act itself. Likewise, Keanu feels like a caricature of a villain via his hackneyed dialogue, but thankfully Worley chooses to off him in an appropriately gruesome scene via Hook Jaw itself.

Gallagher’s art here is solid as ever, with the opening scene again being a highlight. The page has great composition and is packed with fun little background details without ever feeling totally busy. When we move to the coastal scene, the way that Gallagher renders the rocky beach makes it look ancient and interesting, but the character work suffers here a bit. Keanu in particular is super awkward looking, always positioned in classic thug poses but looking uncomfortable enough for it not to sit right. Hook Jaw is the true highlight here, with Gallagher bringing his horrifying, protean body mass to visceral life, especially as it chows down on Keanu’s head.

This was a solid installment in the “Hook Jaw” story but really just for the ending. The story before that is competent but feels like it’s ambling towards the Hook Jaw moment. 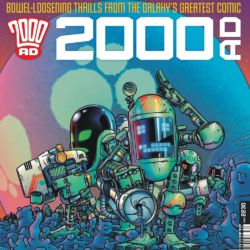 Welcome, Earthlets, to Multiver-City One, our “2000 AD” weekly review column! Every Wednesday we examine the latest offerings from Tharg and the droids over at Rebellion/2000 AD, the galaxy’s leading producers of Thrill-Power entertainment. Let’s get right to it!THIS WEEK IN 2000ADJudge Dredd: A Penitent Man Part 6Credits: Ken Niemand (Script), Tom Foster (Art), Chris […] 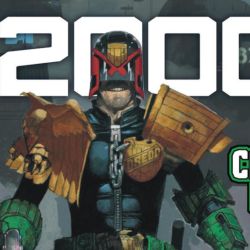 Welcome, Earthlets, to Multiver-City One, our “2000 AD” weekly review column! Every Wednesday we examine the latest offerings from Tharg and the droids over at Rebellion/2000 AD, the galaxy’s leading producers of Thrill-Power entertainment. Let’s get right to it!THIS WEEK IN 2000ADJudge Dredd: A Penitent Man Part 5Credits: Ken Niemand (Script), Tom Foster (Art), Chris […] 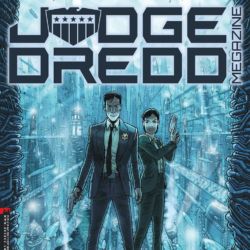