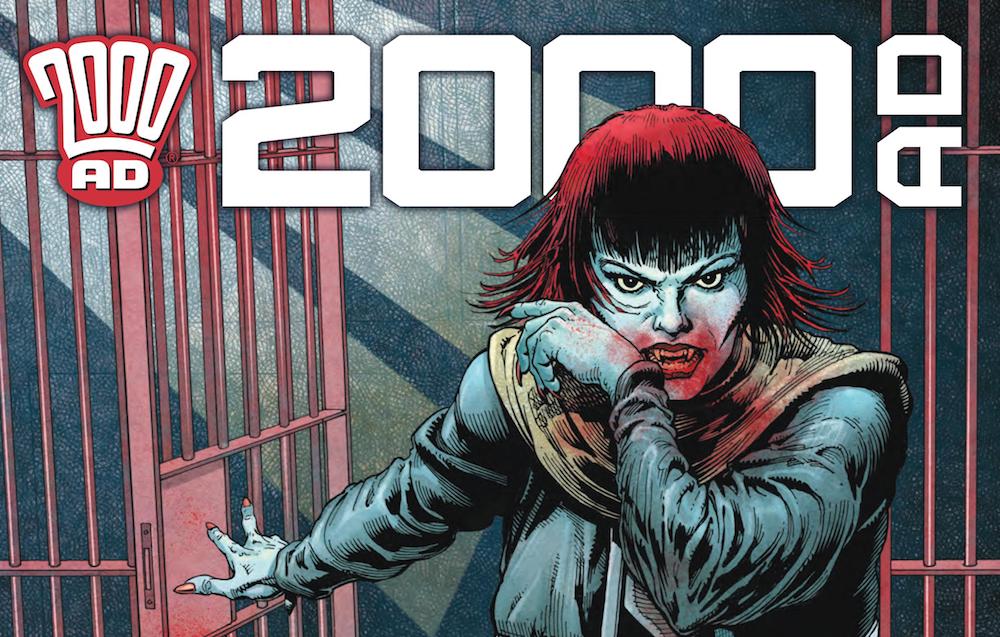 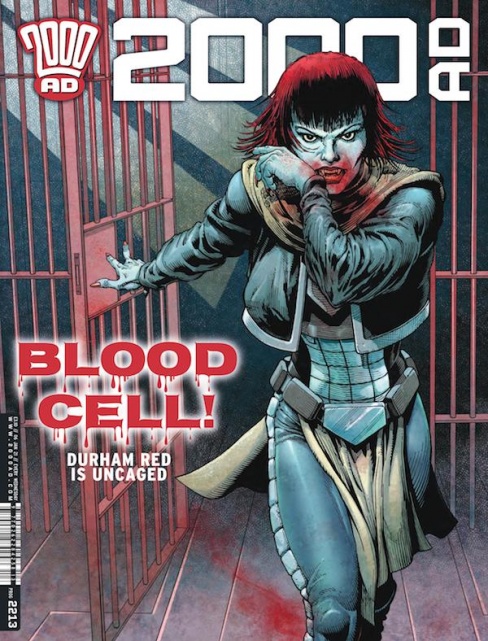 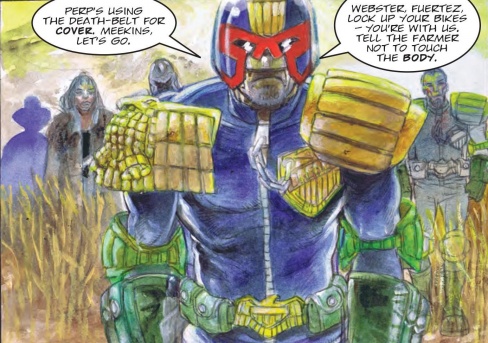 Jacob Cordas: This is the first Judge Dredd story I’ve ever read that has this sense of scale. “Judge Dredd: Desperdlands: 1” is literally bursting out of its own panels. It might be the viscera of a body so decimated it no longer resembles a body, it might be the kind of impossibly cool motorcycle that all my favorite 80’s movies feature, or it might simply be a person crouching – everything is just too big to be contained.

Simpson’s art takes up every page, commanding attention. It’s warm and sickly – a fever dream of reds, greens and yellows. It’s reminiscent of the best parts of Frank Millar’s art but colored with a painter’s eye. It is excellent work that makes each moment engaging and exciting. I would keep reading if only for the art.

Thankfully Mike Carroll’s script is delightful in its bluntness. It progresses forward quickly. Locations keep revealing new angles for them to be appreciated from. Characters dropping exposition is even exciting. Each line is crafted to help maintain forward momentum.

This is what the pilot part of this kind of serialized story should be. It’s dynamic and fun. It engages the whole way through thanks to great writing, grand lettering and truly phenomenal art. This is the best Judge Dredd story I’ve read in a very long time and a great way to ring in the new year.

Michael Mazzacane: After an extended introductory ‘Durham Red’ begins to move at the more typical “2000 AD” pace: quickly. Artist Ben Willsher barley shows the titular Red in a restful position as the series turns into a mini- Assault on Precinct 13. Wilsher creates the sense of energy in several ways throughout the strip, at first through diagonal paneling before eventually adding speed line, or quasi speed-line, effects in the panel. The feeling of energy also is created in some part by the inclusion Danny Glover … I mean Sheriff Howard Jessop in largely stationary or reactionary positions.

I’m not entirely certain how to read Willsher’s rendering style. The colors read like they’ve been flattened with little extra. However, other panels appear with surprisingly subtle rendering such as Sheriff Jessop’s face on the second page. The pages are not over rendered and fit the overall representational cartooning Willsher achieves in the line work, some panels just appear as if they’re missing an extra layer of rendering. The largely unceremonious coloring is effective for the copious amount of blood in the strip, Durham’s victim on the second panel pops with the simple interplay of crimson against ink black.

After a tense introductory strip, this second entry with half the page budget wastes little time in working through an action heavy plot effectively.

Ryan Pond: As a soldier tells the tale of an encounter with Slaine, it becomes apparent that he is not a dependable narrator. He is unable to clearly describe the assailant, or what really happened. And he keeps begging for a way to forget what he has seen and done.

Part one was a little stronger in my opinion, but there is fun to be had in Mills’s script with the narrator struggling to put the horrors he saw into words. Where this entry is fascinating is in Manco’s artwork. Beautiful from every angle, it is especially interesting to see him try to illustrate something so otherworldly and manage to pull it off somehow.

The way the narrator describes the creature makes no sense. With different body parts protruding from different angles, eyes bulging, and teeth showing, it comes through as soon as you see the image. And it sticks with you. This is supposed to be a human, a man, but yet he has somehow distorted it beyond recognition. And then to have him cause so much destruction and trauma is a sight worth seeing.

Not for the faint of heart, part 2 of Dragontamer takes Slaine to a new level of violence, gore, and depravity. Some things make it hard to sleep, and as the narrator will tell you, it takes a toll on the soul to be so sleep-deprived while reliving your own horror. 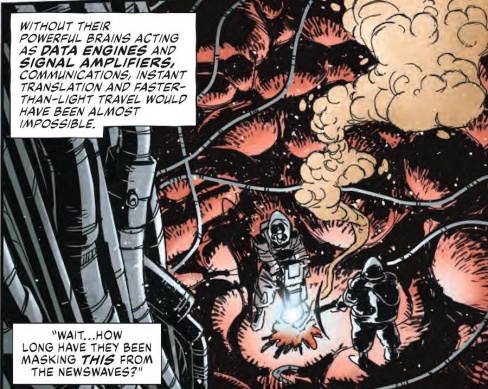 Greg Lincoln: Sometimes a little data dump is necessary to understand the plot. That is apparently where were at in the “Proteus Vex” narrative again. Mike Carroll does his level best to make the narration engaging and layers some dry British wit along the way, but it does get to be a bit much in this part. What he reveals about this world building, the speed that light travels, and how instant communication works in it, does slow the story down. Having it all be revealed as a military secret makes it fine that no one knows about it. That it’s likely central to the new arc is all that we need to know, but the details, no matter how interesting, fill the majority of ‘The Shadow Chancellor Part 2.’

Jake Lynch and Jim Boswell do make this story their own thing time around. Their less human approach to Proteus Vex’s look is less jarring and more approachable, as well as more fitting with the alien physiology all around him. I may still miss the style of Henry Flint’s pencils and inks, but the new art team is growing into their own. Their approach to Midnight is possibly cuter then her earlier incarnation – she could be a cute Shojo familiar in a couple of panels – but it makes just how dangerous she is all the more disturbing. In this story, we get to see how clever she is, as it seems she figures out something far faster then Proteus Vex does. 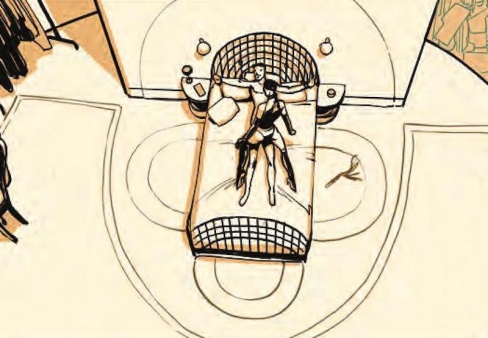 Christopher Egan: From jump “Hershey: The Brutal” Part Two is as different from the greater Mega City One universe as part one was. This chapter moves between two threads. One of Mr. Edu and his girlfriend(?), favorite escort(?), and an update on Frank and Hershey’s situation.

Hershey and Frank are licking their wounds from part one, discussing their next move, and debating on some deeper matters of the mind. Guilt and questions lay heavy in Frank’s mind. Judge Hershey lays down some truth before him, some not so easy to hear. The chapter closes out with some quick paced and brutal ass-kicking handed out by Hershey upon some of Edu’s top men.

Williams’s script is tight and adds some real weight to this story as a whole. There are still plenty of questions in front of us, but motivations are becoming clearer or at the very least being partially revealed. This story feels like a top tier crime comic, more-so than the satirical dystopian world of all other “Judge Dredd” adjacent books. Futuristic tech and settings really take a back seat here and it all looks great. Fraser’s work is detailed without becoming over-bearing. It’s neat, without looking clinically purposeful.

His color work is gorgeous and keeps things simple by sticking to no more than 3 or 4 colors per page or setting. It all captures the needed tone and mood for each piece of the story. Masterfully minimal. Interesting and brimming with a fresh style, Hershey: Brutal Part Two is a great, and fast read that is truly compelling.

I am not qualified to write this. 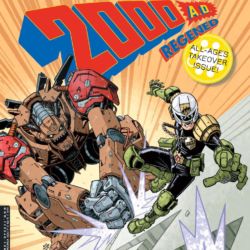 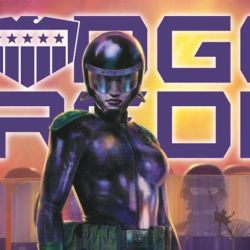 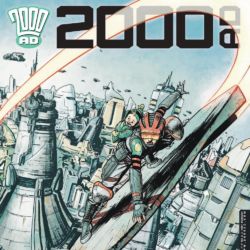