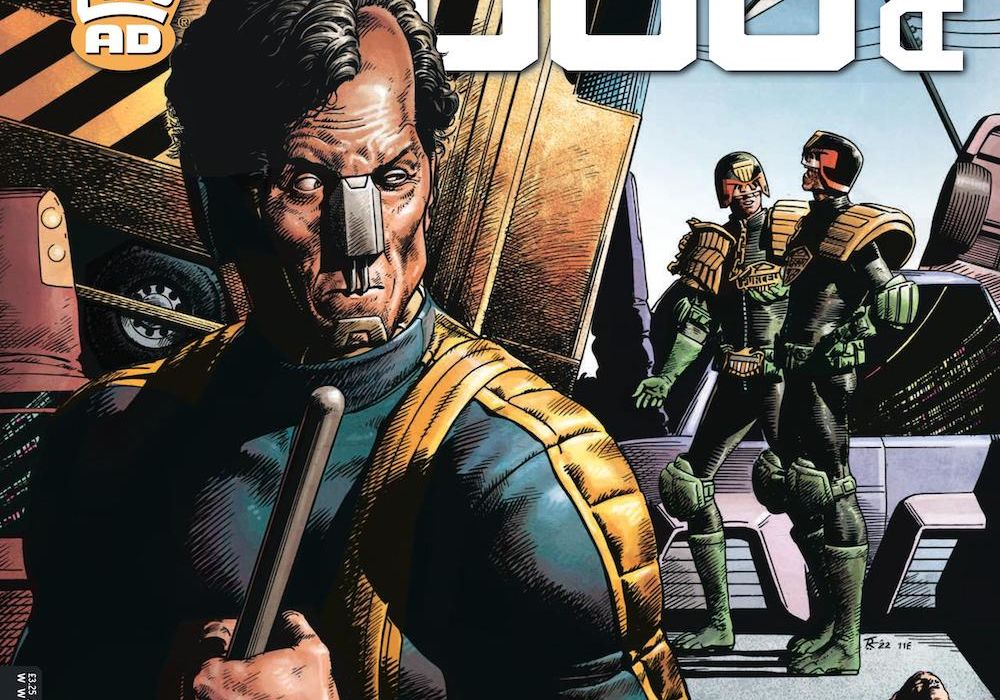 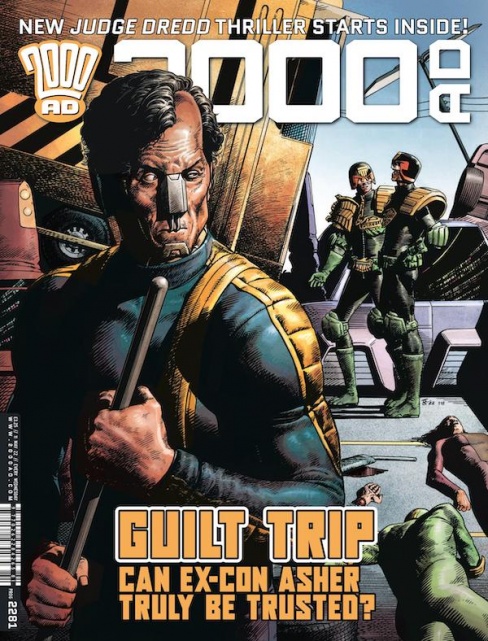 Greg Lincoln: The idea of giving a criminal who has served their time a second chance seems fair and just, but seldom is that chance really fair. It’s hard to say where this particular “Judge Dredd” story will take the story of Kyle Asher, one time Judge now ex-slabber, but we can hope for some depth and nuance given this first chapter. Dredd’s encounter with Asher initially seems antagonistic, but with a second read it’s clear his stance is mostly neutral, and it’s the Judge on the scene that is all in Asher’s face. The narration by Neimand is, if not sympathetic to the ex-judge, conscious of the instilled habits and trauma of being a prisoner and shows Asher as being the most nuanced character in this story. He finds a mystery among the wreckage and knows what he should do and what his instincts tell him he should do. There is a lot of meat to the story that Neimand implies with his actions. Since we see both Dredd’s case and Asher’s mystery, we know how they tie together, and those connections make you want to see Asher make good on this case, even if it does not make his position better.

Tom Fowler and Chris Blythe embrace the off-putting and ugly aesthetics that are part and parcel of the Dredd universe. Few, if any, of the characters are pleasant to look at; they all fit this grim gritty future that still has the elements of Dredd’s late 70s, paranoid origins. They maintain and embrace the classic designs; there is a beauty to the consistency of this universe when the art is approached in this way, even when it does not look modern. 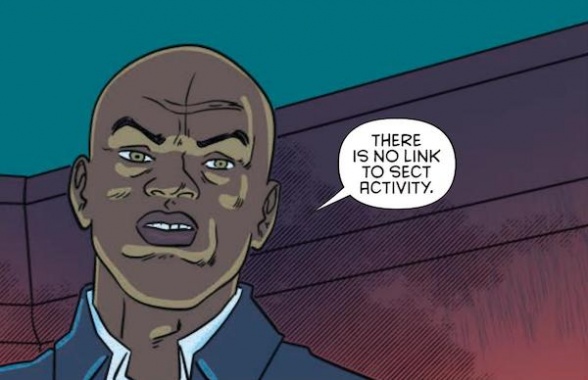 Brian Salvatore: “Mercury Retrograde Part 11” is mostly an exposition dump, to catch the reader up on exactly what the situation is with the unions and the authorities. Maz is being interrogated in an ‘unofficial’ capacity, and proves himself to be both smart and careful. He leaves the cops with nothing new, but takes all the information they were trying to hide. For so much of this story, we’ve seen Maz as a nuisance or someone one step behind where he should be, but this chapter sees him go full savant on the cops.

This is perfectly accented by INJ Culbard’s artwork, which uses posture and body language of the three officers to tell just how close/accurate Maz is getting. They go from confident to frustrated to angry to dejected, all without saying much. While Culbard has been relegated to drawing mainly talking heads in this chapter (and in most of this strip), the small details are really expertly handled.

Dan Abnett spends so much of the strip showing Maz debunking all the union weirdness, but ends with exactly that. The fact that the union is both being framed and guilty of some dangerous and disturbing behavior is a wonderful twist to the story. While I do with that this story was a little less dialogue-heavy, the story has been building slowly but surely, and as we get closer to the finale, the intrigue continues to deepen.

Christopher Egan: The fifth chapter of “Hope” continues to give us some history on the actors we’ve been following this entire time. We get more Hollywood drama and politics. Who gets what role, who deserves what role or what kind of film, etc. At this point it’s unfortunately not very interesting and feels like it’s taking away from a much scarier story going on in the background.

We only get a glimpse of it, the next murder, in the final moments this week. As Hope follows his clues to a gruesome scene it’s becoming more evident that whoever is responsible for these deaths wants the movie shut down. Which has been pretty obvious since the beginning.

As we get nearer to the end of this strip I can’t help but feel that style is getting to far away from the initial intent. The heightened, yet mostly realistic tone of the backstage antics mixed with detective noir style, and the supernatural/occult plot is all still here, but rather than working together to reach a clear conclusion; it’s all become disjointed.

This is not how I expected this to turn out and I hope the cohesion returns as we get to the finale.

Matthew Blair Running from a powerful AI that wants to kill you is hard work, and Dexter and friends are exhausted and in desperate need of supplies. Fortunately for them, there’s a community of religious folk who have rejected high technology and adopted a much simpler lifestyle. It’s great if you want to hide from a murderous AI that can track any electronic device you might have, but it doesn’t make it any less potentially dangerous.

Writer Dan Abnett is effectively introducing the reader to the distant future version of the Amish in “Bulletopia Chapter Nine” and while the group may appear to be safe, sound, and well cared for, there’s the feeling that there is something uneasy beneath the surface.. This is a slow introduction to the current situation the gang is in and Abnett takes his time moving the pieces around and allows the characters some quiet moments to reflect and process what’s going on. With that being said, Abnett does have some tongue in cheek references to how this whole scenario is reminiscent of a horror movie, which is a fun if unorthodox way of setting up a future conflict.

The main focus of Tazio Bettin’s art for “Bulletopia Chapter Nine” is to show how tired and emotionally drained the group is and it goes a long way towards humanizing everyone and making the audience relate to their struggle. With that being said, Bettin does a very good job with designing the setting and townspeople, making it look like they’ve stepped back in time to the 18th century. What’s especially interesting is the design and appearance of the town’s leader, because while he is kind and welcoming, he looks a bit like every cult leader in every slasher movie ever written.

“Bulletopia Chapter Nine” is a quiet and gentle introduction to the newest challenge that Dexter and his friends must face. While everything seems to be normal there is a very real sense that something is wrong, it’s just that Dexter doesn’t quite know it yet. 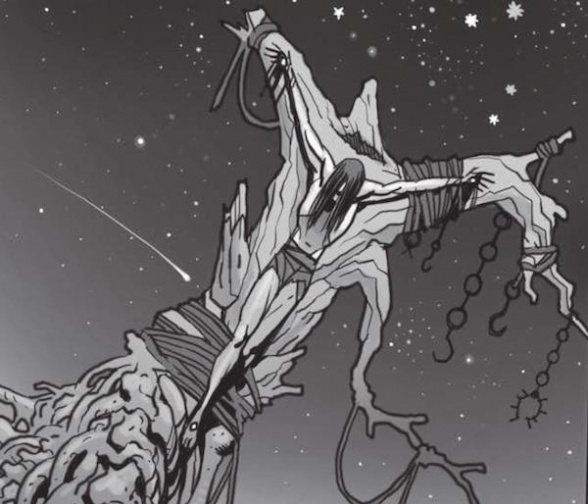 Michael Mazzacane: When we last left off with “Fiend” the creative team ended a riff on Le Carrie style espionage with quite the bang. A rocket to the house tends to do that sort of thing; it also blasts open the world of possibilities for how to begin the next strip. In all those possibilities a trip into the subconscious of Constanta for a talk with his patron, Balaur, while crucified to a tree was not one of them. It was such a tonal whiplash that I’d honestly thought I opened the wrong issues of 2000 AD. That reaction is perfectly in keeping with the dream logic of the opening pages of this strip.

These opening pages also offer a chance for Tiernen Trevallion to just draw something that you wouldn’t find in a Cold War era spy strip. Urban cement jungles and modern metropolises are replaced by ancient swampy jungle with stars in the sky. This vastness is contrasted by the lack of movement found in Edginton’s staging. Balaur is a multi-headed dragon akin to Tiamat in D&D, giving Trevallion opportunities to subtly change these writhing heads’ locations and expressions. Constanta is nailed to a tree. For their part they circumvent this by emphasizing contrasting angles panel to panel and use of close ups to create some sense of perspective movement. It’s all slightly jarring but in a measured way, which is what it needs as Balaur talks about the first sinner and the real Big Bad of this mission. All of which is going over Constanta’s head.

Constanta is otherwise preoccupied as he is quickly called back to consciousness for more torture and arrival of the big boss, Rasputin. Rasputin sees the vampire as the means to gain control of Balaur and to do that he must consume Constata’s heart giving us a decently effective cliff hanger. I’m curious if they go the full Kali Ma from Temple of Doom next strip, not that Constanta needs his heart anyways. 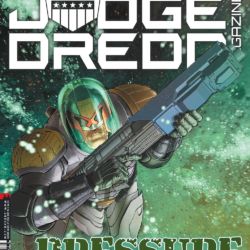 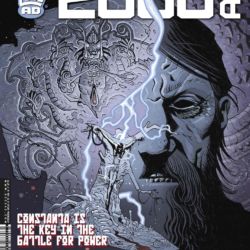 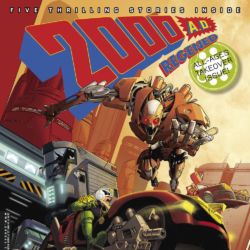