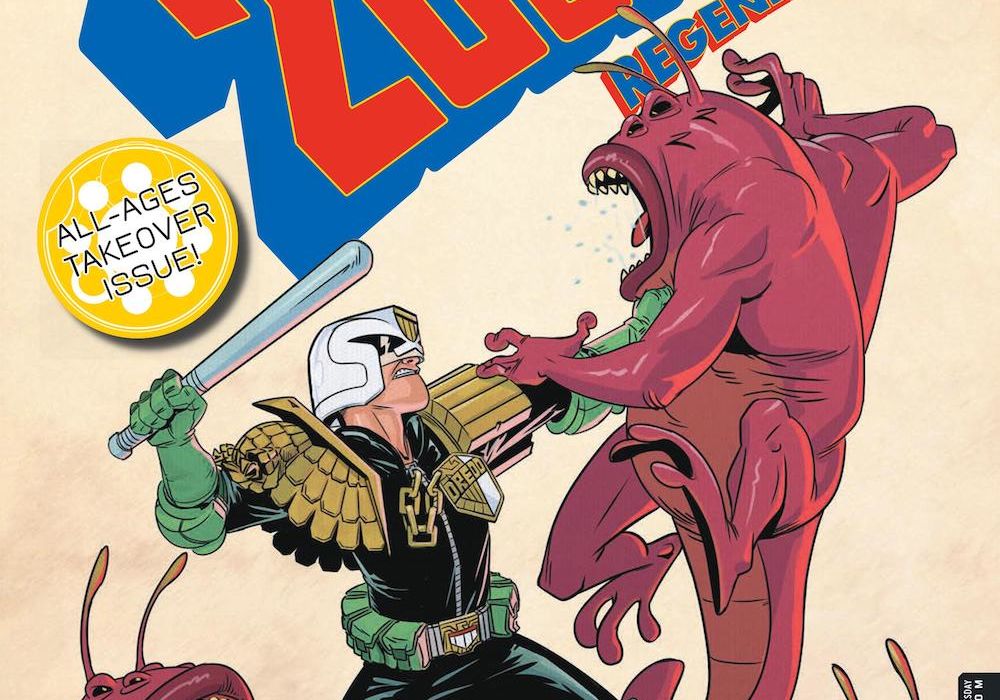 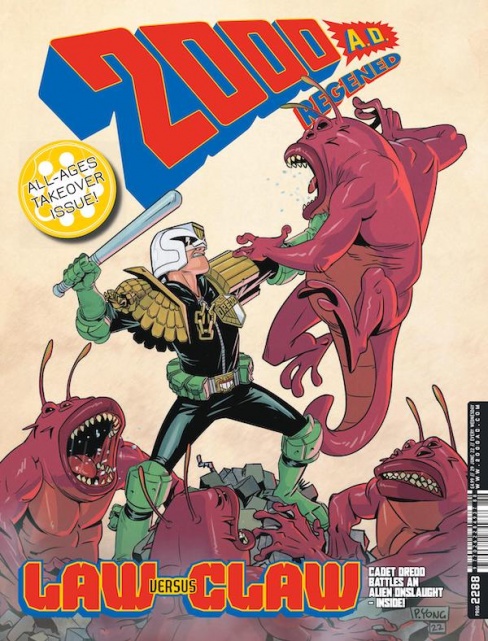 Note: Our review copy did not have the “Scooter and Jinx” story that is listed on the title page, and so we could not review that strip 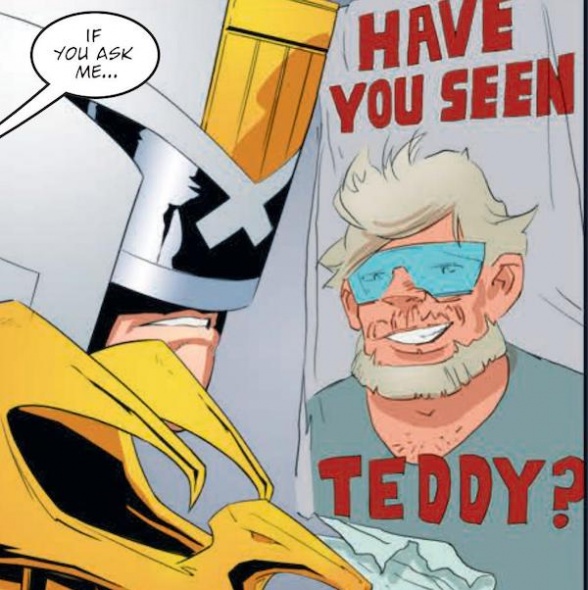 Christopher Egan: In a more light-hearted strip for an all-ages crowd, Cadet Dredd finds himself on the lookout for a missing person at the local Mega City alien zoo.

Dredd’s supervisor Judge Zand sees this missing person as a perfect learning experience for the young Cadet. Action, excitement, and humor are found throughout as Dredd examines various exhibits and questions zoo patrons. Things take a bizarre turn as Johnson adds multiple layers to both the mystery at hand and the kind of story he’s telling.

Carpenter’s art keeps things light, zany, and flashy; keeping in tone with the writing. John Charles gives the work a nice, bright palette matching the sillier and youthful vibe of the story.

One of the wackier “Cadet Dredd” strips to date, Zootropolis has a darker side to it that never gets too heavy by playing with comic book and B movie tropes.

Overall, it’s a fun read and one that’s safe for kids while giving them something just dark enough to chew on after reading.

Michael Mazzacane: “Lowborn High” feels antithetical to the likes of “Cadet Dredd” and the majority of other strips published in “2000 AD”. Anna Morozova’s art is soft, with feathered coloring that places it closer to the work of Marguerite Sauvage. It features an unremarked upon diverse cast in terms of race and ability, with class being the defining factor as it continues a tradition of the English boarding school genre. There is an earnest quality to the humor that lacks the ironic and gross out qualities often found in stuff like “Survival Geeks”. This series reads more like an actual play at something that would grab an audience in the YA book market! Now, if only the creative team and publisher could produce enough strips that would make a collected volume appear quickly and put that theory to the test. This strip ends with the promise of more, next year.

Maybe not everything in “Lowborn High” is as straight forward as it appears, the series parodies Harry Potter with a notably queer lean with series lead Andreogeus ‘Andy’ Frost. Opening on a dream with them potentially imagining themselves presenting more femme? Frost’s moneyed background and placement at the titular high tracks alongside Harry and Ron’s friendship, but unlike noted TERF JK Rowling the creative team are instead emphasizing the obvious economic difference between Andy and their friends. An economic difference that produces itself in the form of class.

These anxieties play a central role in the strip’s narrative as it parodies Quidditch with Orbitus. Anna Morozova’s art captures both the rules and the imagined feel of such a convoluted game in a single page. The abstract splash of various figures on brooms zipping around looking strained and fabulous is contrasted with the homemade quality of the infographic explaining the rules of play.

“Lowborn High ” is a plainly well put together strip. David Barnett’s scripting fits the 10 page format and Morozova’s art is able to quickly sell both a stereotyped understanding of these characters and inject the potential/feeling of depth in a few brief panels. The story it is telling is one you’ve heard before a thousand times over, but it’s telling that story really well.

Greg Lincoln: Taken as the all ages story it is supposed to be, “Into the Void” works pretty well. Nothing in this strip is a new idea and it pretty much goes for the shock reveal you’d expect in the end. That said, there are enough amusing moments along the way to make the trip worth it. Karl Stock knows his cyberpunk tropes and he plays with them in way that are petty entertaining. He revisits the familiar story of the data runner with its well-trod caper-like themes and plot points through new memes and words. Stock coins terms like ego-space, hardlife, solid state, memefield, and clickspace to name just a few. They all manage to give a new feel to older cyberpunk speculative fiction lingo. A few, particularly, like memefields and force-quit weapons lean hard into being bad puns but they are interesting none the less. The strip has a couple great satirical moments too. The interplay between its protagonist and the gorilla shaped professor hiring them is pretty fun. The high point is the moment one of the hunters says they hadn’t had an idea in years and then asked to be told what to think. It felt so very apt for the world today.

The art by Tom Newell is deceptive. At first glance, the art, though nice, looks a little simple, but there is a lot of depth and personality through much of this one off story. The opening panel alone has a dapper cat-people, a man(?) driving in a rocket skull, someone riding an elephant-giraffe hybrid, and a slug person, to name just a few of the denizens of egospace. We later see a massive dragon, a gorilla professor avatar, and a bizarre array of mutant mindjackers. It’s a wildly creative visual extrapolation of video games like Second Life or Fortnite into a new iteration. So much of it looks familiar and new at the same time. It doesn’t do much beyond what it says on the cyberpunk visual label, but it is quite good for what it is. 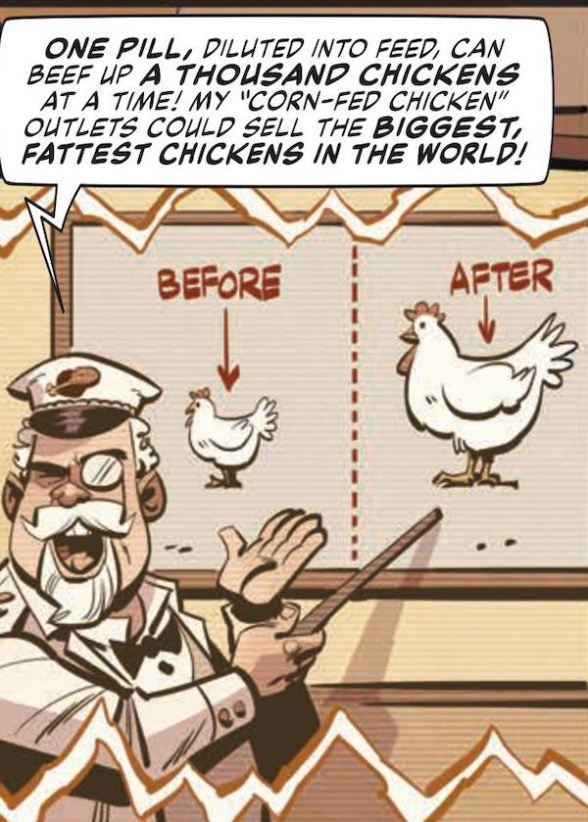 Matthew Blair: Everyone’s favorite sci fi Mary Poppins is back, and this time she must work with her Cockney robot to steal super growth pills on behalf of a chicken restaurant magnate and fight off a giant monster chicken that has ingested several of these pills.

“Pandora Prefect: Feed the Bird” is written by Roger Langridge, who delivers a great story with great pacing, action, and jokes. The Mary Poppins comparisons are strong with Pandora but have some rather humorous sci-fi twists thrown in that will bring a smile to the reader’s face, especially if you’re familiar with the TARDIS or items like a Bag of Holding. As for the rest of the story, it’s about a pair of thieves trying to fight off a giant chicken who ate something intended for a man who owns a bunch of chicken restaurants before they get blown up by the usual (and in this case actually understandable) military response, so if any part of that sounds interesting to you it will definitely be worth your time. It’s zany, funny, and filled with wit and charm.

The art of “Pandora Prefect: Feed the Bird” is provided by Bret Parson, who is locked into this world and these characters so tightly that it would be hard to imagine a Pandora Prefect story without it. The best thing about the artwork is just how expressive the characters are. Parson utilizes a style with a lot of classic Disney animation tropes, such as big Bambi eyes and cartoon style facial expressions. The whole story has a very pronounced and urgent sense of energy that keeps the pacing quick and the reader’s attention focused. It has the right amount of realism blended with cartoon elements that creates a comic that looks surprisingly good and reads even better.

“Pandora Prefect: Feed the Bird” is a great parody of a classic character and is just a fun story to read. You won’t need a spoonful of sugar to help this medicine go down at all. 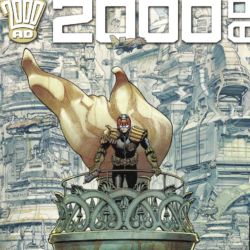 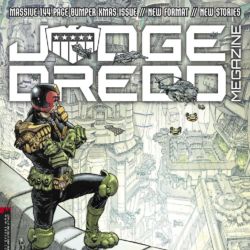 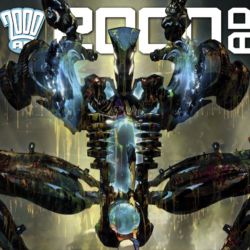