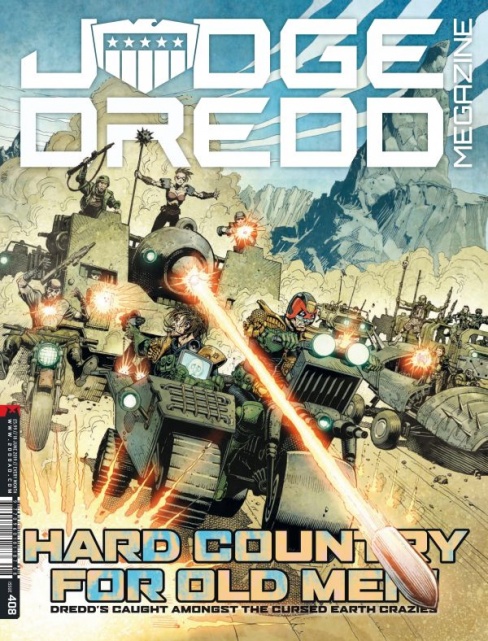 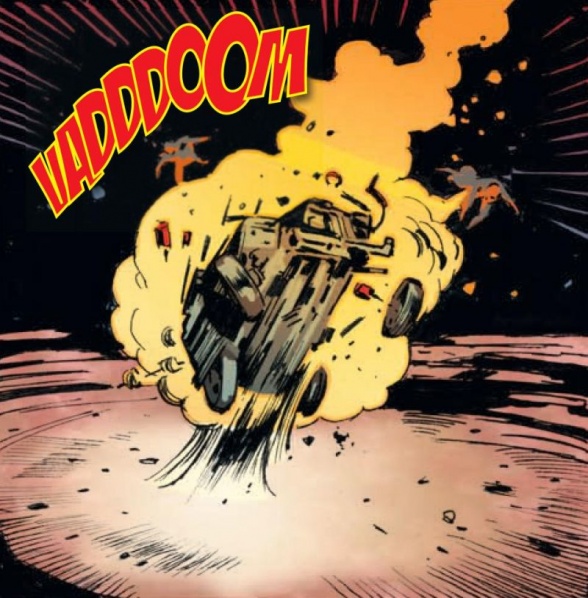 Tom Shapira: The second, and final, part of “The Crazy” shows Kenneth Niemand to be one of the shining lights of 2000AD’s new crop of Judge Dredd writers – elegantly juxtaposing the strip’s bland of on-the-nose social critique with lots of exciting action and some nimble characterization. It’s clear Dredd is emotionally attached to Harrigan, not only from shared memories but also as a reflection himself, all these ‘crzy’ things that Harrigan accuses the Justice Department of are slight exaggerations of actual events, and Dredd himself had the same dark thoughts more than once.

Once again Dredd finds his loyalty to the law squared against what spark of humanity he still has inside of him; he knows he can’t square the circle, rules and feelings, but he tries anyways – and in that we find ourselves much closer to Dredd that we would like to admit. We all come into contacts with truths we would rather not acknowledge, and we all have our ways or repressing these truths – if only to keep sane as we go through our daily routines.

Nick and John Charles continue to bring the old-school charm – balancing humor and explosions in equal measure with strong sense of sequential storytelling and some great bits of character-acting: Dredd’s lower jaw clenching as he considers what Harrigan was and what he has become is just so good, Dredd is a very character to work emotions though and the fact that they succeed with such a subtle gesture makes it doubly impressive. 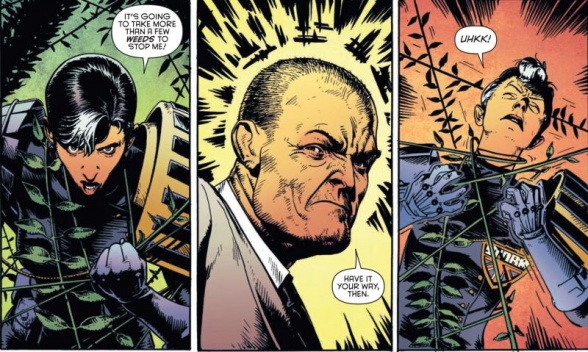 Greg Lincoln: The finale of ‘Green and Pleasant Land’ is just kind of a satisfying finale to the story given the unevenness of that last two parts. Moore and Rennion don’t introduce an unknown as the perpetrator, but they do use someone we were pretty convinced was long dead. It’s certainly conceivable that a former Psi-Judge might get away with his series of murders, but at this point it’s very unclear why he would have faked his death and now appeared to kill all these various and sundry persons. The finale does make great use of the spirits that surrounded the case and Lillian Storms connection to the land of the dead. It makes for a good series of events and calls back to earlier chapters. It’s just sad that in all the convolutions our connection to he players now called back into the scene is so shallow. There is the making of a good thriller here it just fell slightly short in the execution.

The art by De La Cruz and Foster returned to the nice solid details of the first chapter.. It particularly came together in the final moments when the ghosts returned again to the tale. The details are the to bring visual interest back to a story and nearly made up for the round-about storytelling. They almost made it really worth the telling. So much of this chapter is layered rich and expressive that those few panels that fall short stand out. 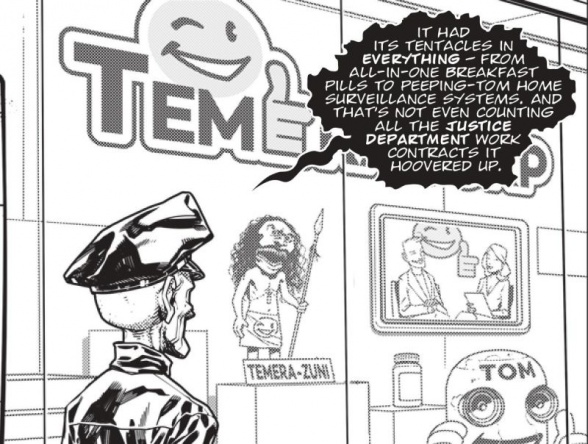 Rowan Grover: McConville pens a macabre yet quirky haunted tale in “Just Business”. The use of the classic horror narrator is a lot of fun here, as it gives us a sense of unease and thrill that you wouldn’t get without it. The story itself works a little in the vein of cautionary tales, as it establishes that our main character Angus wouldn’t have ended up in the situation he found himself in if he had stuck to finishing his tenure at the Academy, but also takes a look at the underground workings of Mega City-One and the concept of people smuggling. I love that in the back half of this story, we see each of the people Angus smuggled from the Cursed Earth back to the city start to feel more and more uneasy about their place, and eventually get picked off, as it creates some solid tension for who’s going to get taken next. The story resolves with a unfortunately grizzly end for the mostly innocent Angus, but the criminal Carvello Slime thankfully gets put to the streets in a conclusion that still feels chilling thanks to the narrator’s input.

Art is handled by Neil Googe, who’s black and white style pair perfectly with the old-timey horror tone that McConville is undoubtedly going for. I love how absurdly huge the narrator’s grin and how twisted his hunch is, all these cliches work beautifully for conveying the classic horror tone. There are some great emotional beats within the story too, with one of the best occurring when Angus begrudgingly accepts his criminal job. Googe conveys the guilt he feels for knowing that he has to participate in this illegal act, yet also manages to show subtle desperation as he knows he has no other choice, with his head hanging in his hands. Googe handles shading and tones superbly here too, using a more heavily greyscale palette when Terry wakes up in a cold sweat in his new home. It’s clever setting work that doesn’t rely on colors, using black and white techniques effectively to tell the story.

McConville and Googe tell a solid cautionary tale mixed with general macabre in “Just Business”. The classic horror tone is evident throughout the whole text and Googe brings it to creepy, twisted life.

Michael Mazzacane: As “The Torture Garden” races to the finish, the creative team do not have the page real estate to be self indulgent or play by their old visual rules. The hazy deadline narrative forces this strip to both move with a quickness and act more like a comic strip. Looking over previous entries in this strip, the core visual shortcoming for the strip was a mixture of bland page design and how that design informed the pace of the strip. As the relief force of Marines try to rescue the remaining captives, writer David Hine and artist Nick Percival are forced present pages that are more plainly functional as the strips narrative goes into a bit of a generic phase.

These final strips of “Torture Garden” are being treated as old war strips, or more accurately war films like The Dirty Dozen, as the marines face long odds of getting everyone back to the ship. It takes some heroic sacrifice to get people back to the ship. Percival frames these moments like Tank’s decision to stay behind as a distraction in the generic visual idea of heroism, as a dramatic moment though it feels just a tad hollow because there was never much of a connection made in the preceding strips. Tanks own sacrifice is also quickly undercut with comedy as the Dark Judges pull all their finishers on him, he tried but didn’t put up much of a fight.

The real joke, however, is the ease at which the Dark Judges are distracted by playing with their food. Percival lands a real comedic moment as Judge Death turns around and wonders and hisses “where did they go?” The creative team find some solid moments of comedy based around the Dark Judges. It isn’t super deep but you don’t need it to be as Judge Whisper with half his head blown off wonders why it feels like he’s losing his mind. Some of the best moments through the strip have been when the creative team use and explore the Dark Judges bodies, finding the comedy in their repetitive behavior proves no different.

“Torture Garden” may not ever have been entirely my cup of comics tea, but there are clear technical improvements and overall work that has made this and the last batch of strips better reads.

Welcome, Earthlets, to Multiver-City One, our “2000 AD” weekly review column! Every Wednesday we examine the latest offerings from Tharg and the droids over at Rebellion/2000 AD, the galaxy’s leading producers of Thrill-Power entertainment. Let’s get right to it!THIS WEEK IN 2000ADJudge Dredd: End of Days, Part OneCredits Rob Williams (script) Colin MacNeil(art) Chris Blythe(colours) […]