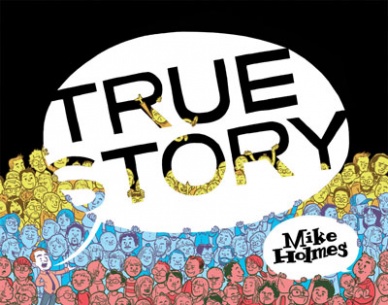 When I first started this column I got it into my head that memoirs don’t really count as non-fiction, at least not in the same way a book like Feynman does. It seemed to me a question of objectivity: a history or biography will draw from multiple sources and (hopefully) present a nuanced view of a subject, while an autobiography or travelogue will only draw on one person’s experiences, and therefore present a highly subjective narrative. Different animals, right?

But sometimes I come across a book like True Story, and it seems a damn shame to draw so fine a line. Originally released as a weekly comic strip, each of these bite-sized comics recounts a true story that has been relayed to the illustrator, Mike Holmes. Some of the stories come from friends, others from readers, but they’re all (ostensibly) true, coming straight out of somebody’s memories before being filtered though Holmes’ storytelling style and artistic sensibilities. What wind up on the page are all kinds of surprising tales, some mortifying, some hilarious, some sad, but each giving an engaging portrait of an incident that somebody knew was worth retelling.

In presenting what are basically memoirs in miniature, Holmes sets down so many little tidbits of truth – the human, emotional kind as well as the factual – that burning through all the stories in one sitting (and it’s hard not to) is a pretty enlightening cumulative experience. In the time it takes to page through a chunky handbook-style paperback, you’ll learn all about the perils of heatstroke, encounter lots of odd strangers, relive pretty much every awkward moment you ever had in middle school, and find out why you should never go out for Hallowe’en as a volcano. You’ll hear about bullies overcome or merely bemused, successful and not-so-successful pranks and plots, and encounter at least one really remarkable coincidence. There may even be a marriage proposal in there somewhere, and really, how much more real does it get?

Mike Holmes’ cartooning is simple enough to make the most out of the limited space afforded by a strip while still getting in enough detail to make the pus-filled eye of a raving homeless man pretty darn legible. But it’s the expressions that are the killers: moments of uncertainty, hesitation, and bewilderment come across beautifully. So do all the bigger and brighter emotions, of course, but it’s awkwardness as one of life’s inevitabilities that really comes to the fore in this strip, and Holmes does awkward with a lot of grace.

Speaking on a more general level, Holmes uses varied and unusual layouts, very rarely presenting a line of evenly-spaced, same-sized panels. However, things sometimes err a little too far in that direction, and it can be difficult to figure out what order to read the panels in. Most of the time, however, Holmes handles the compression involved in adapting an anecdote very well. Pretty much everybody is familiar with the experience of hearing an anecdote that goes on and on, and the fact that Holmes manages to keep some obviously very complex stories down to the essential, presenting a memorable snapshot of the absolute core of a tale, is pretty impressive.

Quick read though it is, True Story is one of those books that makes you feel disproportionately richer for having checked it out. There’s something magical about experiencing a story that (probably, mostly, although maybe not in exactly that way) happened to somebody in real life, something that reading a purely fictional tale doesn’t quite do. And the pleasure is partly autobiographical – it’s hard not to recollect your own personal stories, and wonder whether they’re worth dusting off for another revival.

True Story is out in trade paperback from Invisible Publishing. And while Holmes has just recently (February 2013) stopped doing the weekly comic, you can browse the archive over at The Coast.