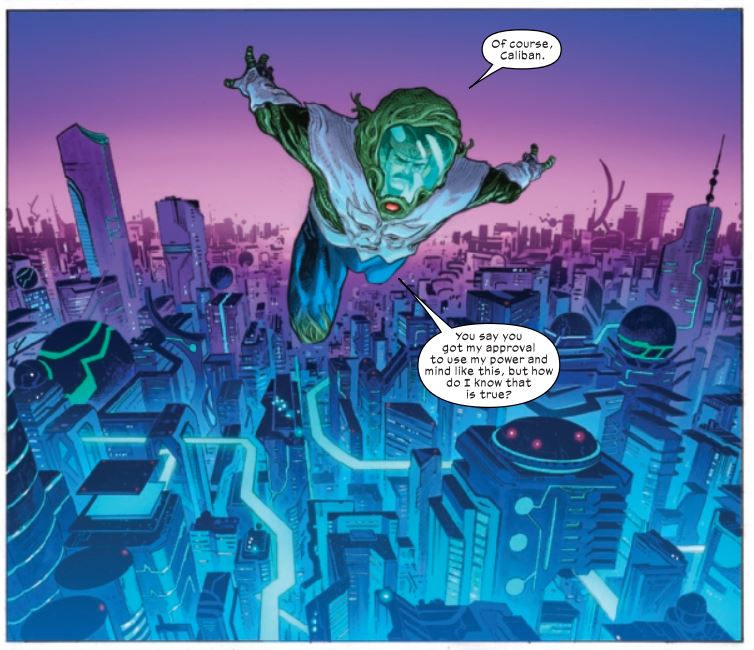 Welcome back to Mutantversity, a class offered at the Krakoan Akademos Habitat. This isn’t a place to find big reviews of X-books, (that’s what our Review section is for!) but it’s a great way to keep up with one of the most complicated superhero series around. We’re going to dive into the deep end as we try to parse all the secrets of this new era of “X-Men” comics. As your designated X-Pert, I will do my best to help you work through everything Marvel’s Merry Mutants have to offer!

A big crossover event comes to an end and you know, I think I’m going to miss it. How often does that happen? A miracle to be sure. Here’s your X-News. 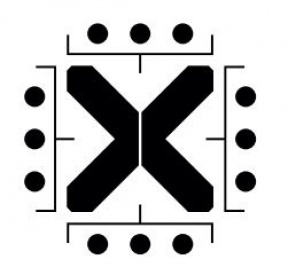 Do a barrel roll!

The end of the world came, and superheroes faced it and won. Not exactly a shocking swerve. But you know, sometimes it’s OK to listen to your favorite songs, just to enjoy the performance. (A tortured music metaphor? I’m really channeling my inner Kieron Gillen). When the Celestial begins to annihilate the Earth,the heroes needed to pull out all the stops. They needed a new ally. They needed… Starfox!? 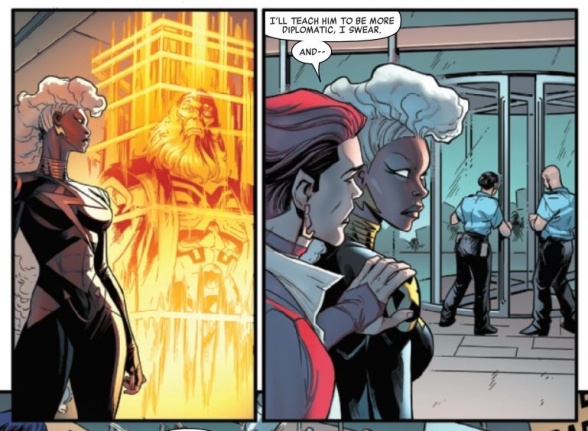 Starfox, a.k.a. Eros, was one of the highest profile Eternals before the MCU movie came out. He was an Avenger and a supporting character to heroes like Captain Marvel (the boy one) and She-Hulk (the girl one). He recently showed up in a movie played by a hot guy. I shouldn’t be surprised to see him back. But I am. That’s because in the past, Eros’ powers have always been, like, anti-consent. Eros can force two beings to fall in love with each other, regardless of their willpower. And you better believe that was used uncomfortably in past appearances. His role in “She-Hulk” was a sort of proto-Me-Too allegory about a rich and powerful man forcing himself on women, without consequences. I can get why it’d be tempting to try and put a modern spin on that. But that’s not what Kieron Gillen has in mind at all.

The story ends with Eros’ ascension to Prime Eternal, the ruler of their people. He used the power of the Eternals to touch every being on Earth, to like, show them the meaning of Love. It was trippy. But it implies that this new rebooted Eros is going to be moving away from his past as a super-creep, and to be used more as he was originally intended by his creator Jim Starlin- as a being of pure love, in contrast to his dark brother Thanos. 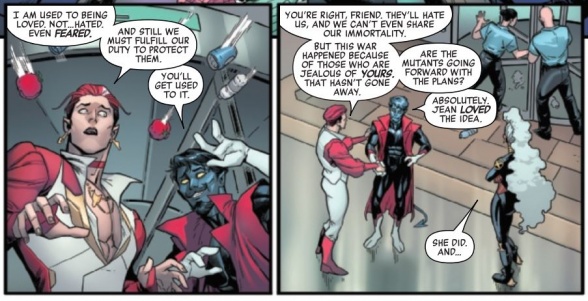 This is a way better use of the character than retreading the same old icky ground. I’m sure there is a story that will attempt to rectify Eros’ sketchy past, but this story proves that weird powers can be the best powers. Much as the current era of comics has made Cypher into a major force, Eros has the chance to become something more. Powers don’t always have to be aggressive, used combatively on other people. I tentatively support the new Prime Eternal, he can’t be worse than the last one.

The Truth Is Out There

By the end of this story, the secret has been spilled on not one, but two super peoples. Krakoan resurrection recently got exposed, and now the Eternals are in the spotlight. They confessed their dark truth- every time an Eternal resurrects, a human somewhere has to fall dead. That should sure take the heat off of mutants right? They just use psychics and Cerebro and reality warpers and nifty golden eggs. 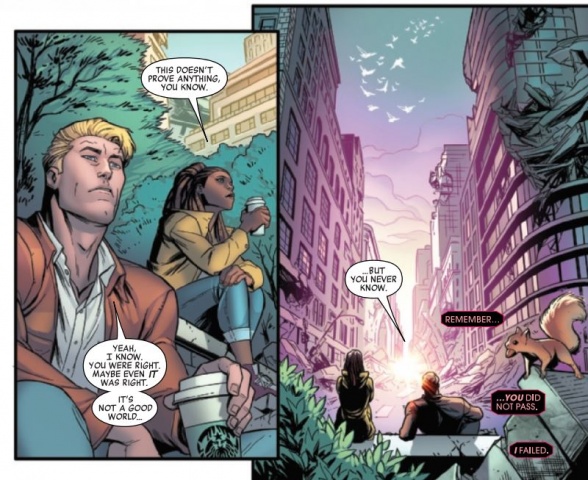 But now the mutants have broken their rule (or ‘custom’ as Nightcrawler calls it) by resurrecting human guy Steve Rogers. When publicly asked, mutants have hemmed and hawed and implied that resurrection would only work on mutants. I always took this to mean that they could probably figure out a way if they applied themselves, but never really wanted to figure it out. But nope, they could have resurrected any human at any time if they chose to. And Captain America is the first. 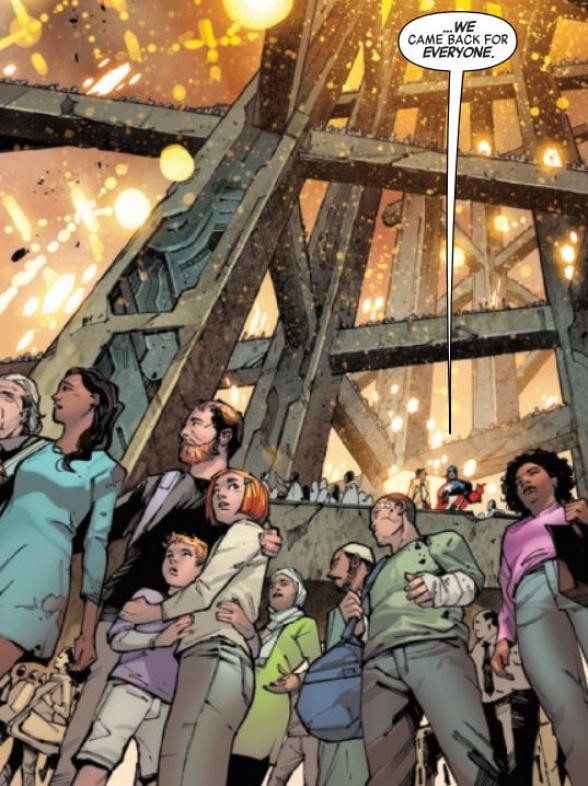 So obviously we are going to see hordes of humans demanding the return of their loved ones, right? This can only be the pathway to more anti-mutant bigotry. The world sucks. They hate mutants so much, it’ll probably end up taking the focus off the Eternals, who have a way sketchier way of resurrecting. But nobody cares about the Eternals enough to hate them.

Still not entirely clear on why Cap came out of his egg naked but holding his shield. I mean, Wolverine gets resurrected with his full adamantium skeleton. Let’s just write it up to Proteus, a literal reality warper. 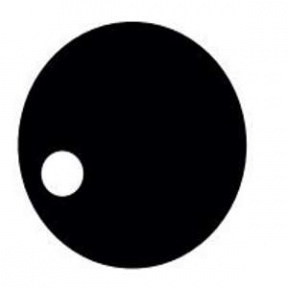 Holy hell you guys. Max “Erik Lensherr Magneto Magnus” Eisenhardt is dead. Like really truly dead. The biggest serious casualty of the Age of Krakoa. How did this happen!? Let’s follow the thread. 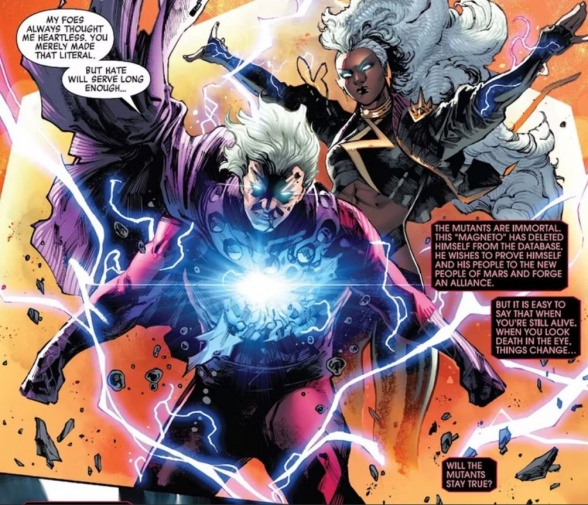 A couple of mutants have died in other, parallel worlds. We know that’ll mess you up. Rockslide came back as Wrongslide, an entirely different person. Gorgon was also killed, though that dude needed a new personality so he wasn’t mourned for too long. Besides that, everyone has been resurrected, from Omega Red to Nightcrawler to Professor X to Madelyne Pyor.

Magneto wasn’t in another ‘verse when he was killed, he was on Planet Arakko, formally know as Mars. He recently got an appointment to their equivalent to the Quiet Council. There, he was called out for cowardice. If he could return from death, then he couldn’t properly fear death, and a warrior unafraid of death is a coward. So Magneto did the most dramatic thing, and theatrically destroyed the Cerebro record of his soul. No resurrection for him! And when Uranos tore apart the world, killing dozens of mutants, Magneto stood in his way, and got his heart punched out for his trouble. 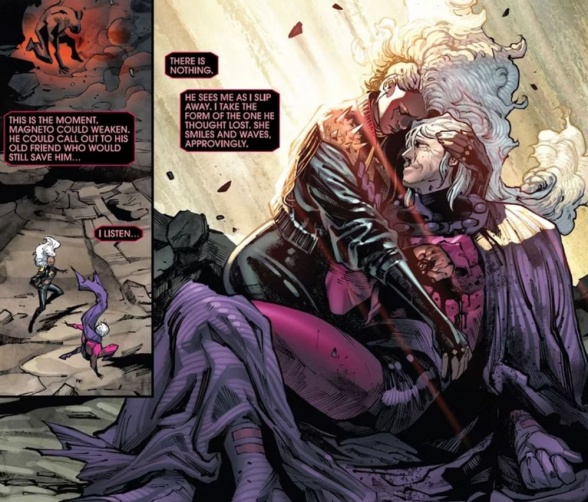 Did that kill Magneto? Not right away! Using his vague, Silver Age, magnet powers, Max built himself an artificial heart to keep his blood pumping for a little while longer at least. Long enough to face off with Uranos for round two, and with backup from Storm, they sent the evil Eternal back to the hole he crawled out of. 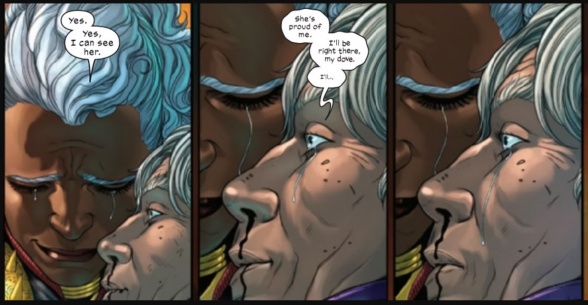 We then get five whole pages of Magneto dying in Storm’s arms, written beautifully by Al Ewing and devastatingly drawn by Stefano Caselli. His final concern- his long time boyfriend Charles Xavier. “Promise me you’ll watch Charles,” he tells Storm, “Now Charles is alone with his dream.” Magneto is a cool guy labeled a villain by most. And Professor X is a jerk, considered a hero by many. Magneto knows how similar the two of them are and without peers that he respects, Professor X is gonna break bad. He’ll tell himself he’s fighting for the greater good, but he’s going to be a menace. Condescending at best. Disastrous judgment is likely.

But there’s a worst-case situation too. You know what happened last time Professor X thought Magneto was dead? Onslaught happened, a super powerful psychic entity formed by Charles’ and Max’ combined psyches. The Onslaught energy force is out there, tormenting mutants in the astral plane. I got a feeling that the upcoming “Fall of X” is going to be about one X in particular, the Professor. 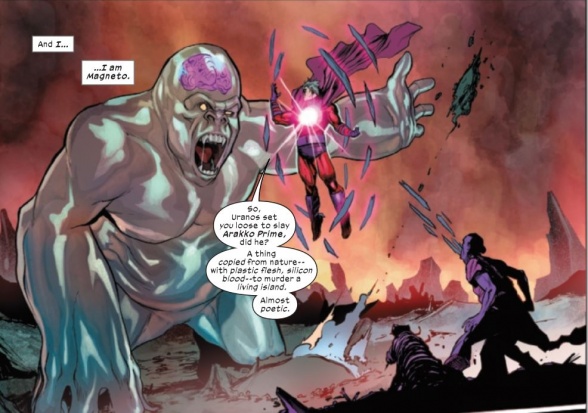 RIP to Magneto, who lived his life like a boss and went out like a total king. 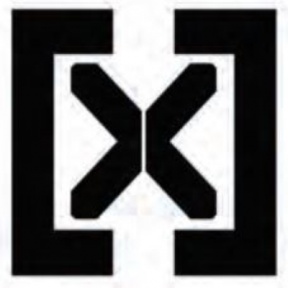 There’s a lot of weird resurrection going around! If you recall the X-Men mission to The Vault, you will remember that only one mutant made it back. Synch entered the Vault with Wolverine (Laura Kinney) and Darwin. In the Vault, time moves way faster than it does on Earth. Darwin can adapt to anything, so that oughta keep him safe. Wolverine can heal and is long-lived. Synch can borrow both of those powers. Darwin was captured early on, and Synch and Laura lived for centuries… and fell in love! In their final escape, Synch made it close enough to the Vault’s exit to be resurrected on Krakoa with all his memories. Laura did not, and she was resurrected from a time before she went into the vault. 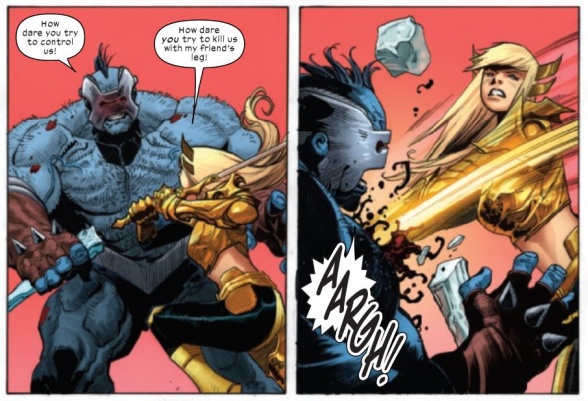 So Forge entered the vault looking for Darwin, who never came out. He once survived necromancy from the Norse goddess of Death, he’s likely somewhere in there. But that’s not who Forge found. When he opened the creepy Matrix-style casket he didn’t find Darwin, but old woman Laura instead!

Oh man. So this goes against a rule on Krakoa- you don’t resurrect someone who is still potentially alive. There’s a young Laura out there doing her own thing. But this older one presumably still has feelings for Synch. Will she get out and be reunited with her love?

Also, Laura is a clone of Wolverine, so is this new Laura a clone of a clone? It’s not like there’s a shortage of derivative Wolverines running around. And Gabby Kinney has been resurrected, and she was a clone of a clone! Laura Kinney and her family will forever challenge our sense of individuality and self. And she’s probably got a lot of anger and resentment. And she definitely has got some sharp claws. 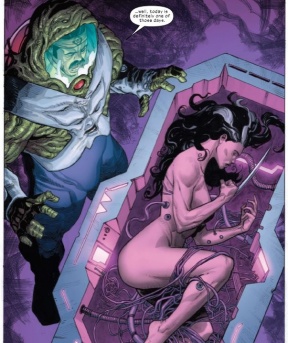 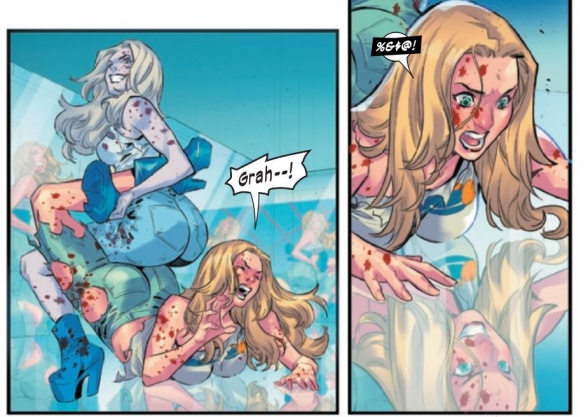 Jubilee officially is a WWE fan. It is canon. And Dazzler is obviously one too. And she put her evil twin in the Sharpshooter. That rules! That is all.

X-Books Read:
“AXE: X-Men” #1 – A really fascinating look at a few Krakoan characters as they react to the explosive events of, well, the Event.
“AXE: Wolverine” #1 – I cannot believe there are multiple different wolverine stories within this one event and that they are all written by Ben Percy,
“AXE: Judgment Day” #6 – The Event wraps up and, I need to catch my breath. I think this is a strong contender for the top tier of superhero mega crossovers.
“X-Men Red” #7 – A stirring death, then a political showdown, then space opera intrigue… with the promise of war? This is still the best damn book.
“Immortal -Men” #7 – This Nightcrawler reads a bit strange to me, but by the end of this fascinating character study I couldn’t wait to see what the future holds for Kurt Wagner.
“X-Men” #16 – More focused than ever, the schemes in this issue are as twisted as any of the other good X-books this month. And the last page had me fangirling out!
“X-Force” #32 – AXE forced this book to branch out, and guest spots from Deadpool and Kraven the Hunter bring some needed levity.
“X-Force” #33 – This is the longest span of “X-Force” issues I’ve enjoyed in years. I even think I’m starting to vibe with Omega Red.
“X-Terminators” #2 – I have a new favorite genre and it’s whatever the hell Leah Williams is doing in this. 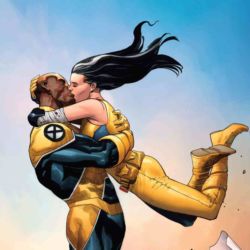 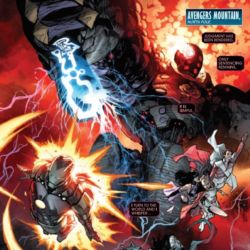 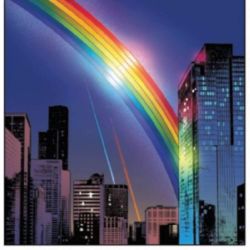 X-Men Mutantversity: Who Will Judge the Judgment Day?