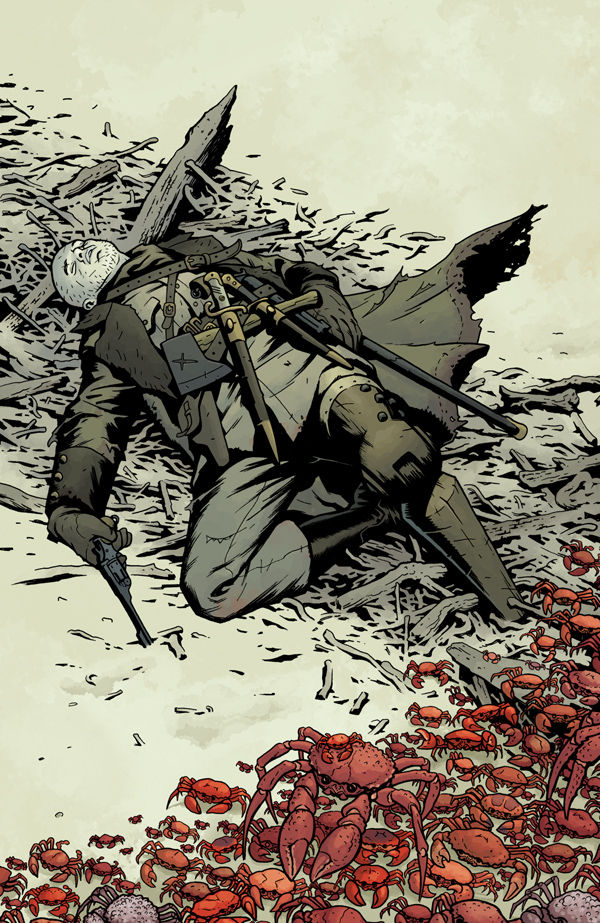 When I wrote about my appreciation for Mike Mignola, Christopher Golden and Ben Stenbeck’s “Baltimore” for last week’s Friday Recommendation as part of our month-long tribute to Abe Sapien and the Mignolaverse, Brian suggested I take that a little further and do a column on it.  Naturally, since “Baltimore” is one of my favorite new series in recent years, my immediate response was, “Oh, I’ve already done that one.”  However, as you can probably guess by the title above, a quick search of the archives revealed that it somehow managed to disappear from my list of books to write about without a column ever emerging.  This is a serious oversight, and one I need to rectify immediately.  So, with no more delay, let’s dive in and take a look at the book that quickly became my favorite of all the comics with the name “Mignola” on the cover. 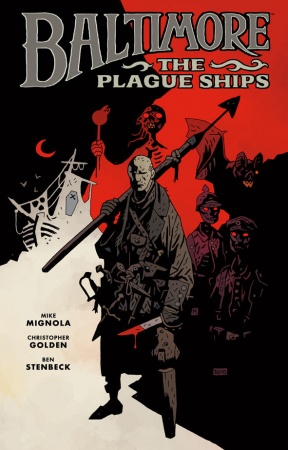 Except we can’t jump right in to talking about the comic without a quick detour, as the story of Lord Henry Baltimore actually began in prose form, in the novel “Baltimore, or The Steadfast Tin Soldier and the Vampire,” by co-writers Mike Mignola and Christopher Golden.  The comics are set within the course of the events that take place in the novel.  As such, I’ll have to spoil some of the major plot points of the novel to explain where the comics come from, but do not worry; reading the novel is not actually required to follow along with and enjoy the comics on their own.  To be honest, I myself have yet to read the novel; my knowledge of its plot comes entirely from reading the comics and researching for this column.

Lord Baltimore was a Captain in the British Army, serving in the first World War, when his squad was ambushed by enemy troops and killed.  Suffering a major injury to one of his legs, Baltimore lost consciousness during the fight.  Coming to, he discovered several giant bats feeding off of his fallen soldiers.  As one turned to feed on him, he struck it with his bayonet, putting out one of its eyes.  Unfortunately for him, the bat creature later turns out to be Haigus, the Red King, an ancient and powerful vampire with an immortal temper and an apparent tendency toward overreaction.  Not content with infecting Baltimore’s leg with gangrene, which forced him to have it amputated, Haigus found and killed Baltimore’s family before his eyes, and as that was apparently not enough, declared war on all mankind by unleashing a plague of corruption and vampirism that quickly decimated all of Europe.  Baltimore, in turn, chose to dedicate himself to vengeance for his family and curing Europe of the plague by destroying it at its source: the Red King himself. 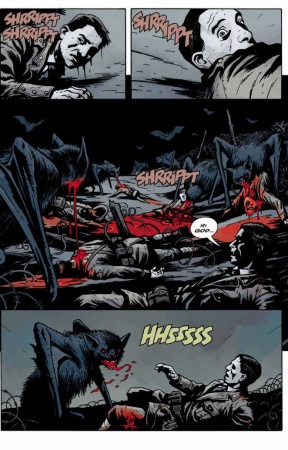 It’s at this point that the comics pick up the story.  They follow the adventures of Lord Baltimore as he searches across the continent for his foe.  Haigus, knowing he is being hunted, leaves a trail of monsters and lesser vampires in his wake to slow the unceasing march of his pursuer.  As I mentioned in the last Friday Recommendation, this makes Haigus a Moby-Dick to Lord Baltimore’s Captain Ahab, and not only because they both sport stylish wooden legs.  As in “Moby-Dick,” Baltimore’s hunt becomes all-consuming, quite literally in Baltimore’s case, as the world of Baltimore falls deeper into the plague he is responsible for causing.  The elusive Haigus rarely makes an appearance within the comic itself, appearing in asides, stories told by the few survivors our protaganist encounters, and so far, only encountering Baltimore directly a handful of times.

Because of the plague, the world of Baltimore is a dark, brutal world where the survivors cower in their homes or drink themselves to distraction to ignore the unstoppable plague and the many terrible beasts that came along with it and now roam the countryside.  The rich and powerful all seem to fall into corruption of their own, whether by turning to tyranny and black magic or simply becoming vampires themselves.  There are still those who try to keep the peace by hunting down vampires and those who associate with them, and one such man, Judge Duvic, has learned of Lord Baltimore and his obsession with vampires.  Thus, Duvic is himself on the trail of Baltimore. 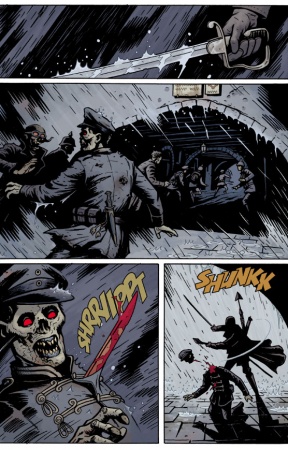 Using the phrase “the world of Baltimore” above is apt, as the world around him is, in a very real way, a reflection of his own actions and personal struggles.  When he injured the vampire, not only did he seal his own fate, and that of his family, but all of Europe, as the vampire is the source of the plague that now decimates the continent.  Only by avenging his family and killing the original vampire, the ancient one responsible for the plague, can Lord Baltimore begin to restore the damage caused as a result of his own actions.  It is a tremendous burden, but one Baltimore is more than willing to bear—after all, it fits alongside his own quest for satisfaction.

The setting is not the only thing about the book that reflects the main character.  Indeed, one of the reasons why it’s such a great comic is because down to the color scheme and the lettering, everything about the comic mirrors the character and the nature of the quest he faces.  In his single-mindedness, Baltimore doesn’t have much of a sense of humor–you won’t find him cracking jokes to break the tension like Hellboy does.  Likewise, the comic maintains a serious tone throughout.  The few moments of humor certainly don’t come from the protagonist.  He keeps his pain and sadness hidden well beneath his cold exterior, but you get plenty of hints about how he must feel in the anguish of the few survivors who, like Baltimore, are losing their entire world. 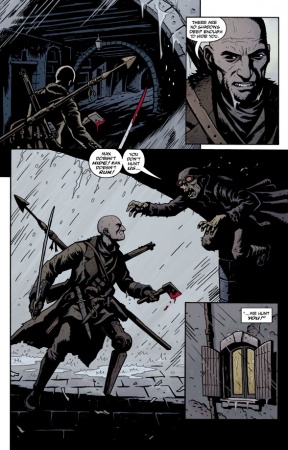 Unlike “Hellboy” and “B.P.R.D.,” the art for “Baltimore” is done by one man, the talented Ben Stenbeck.  He’s done work in the Mignolaverse before, on “Witchfinder: In the Service of Angels” and “B.P.R.D.: The Ectoplasmic Man,” in addition to numerous appearances in various Dark Horse horror anthologies and one in “Marvel Comics Presents.”  He is himself a perfect fit for “Baltimore.”  In fact, I can’t imagine anyone else doing the job; Stenbeck is as much a part of the “Baltimore” comics as Mignola and Golden.  He has great compositional and storytelling skills, and is equally skilled at drawing big, dramatic fight scenes full of movement without ever losing clarity as he is at capturing the emotions of horror, despair and rage on the faces of Lord Baltimore and those he encounters.

The book is colored by coloring legend Dave Stewart.  As in much of the Mignolaverse, he uses mostly deep, dark colors with very little brightness, except in the reds.  “Baltimore” seems to emphasize this effect even further.  The shades of every other color are muted, almost like an old, sepia tone photograph only in blues and grays.  Only the reds get truly bright, but you see it everywhere: in a single thorned rose, in raging fires, the fresh blood from combat–and in the eyes of the vampires Baltimore hunts down.  Red is, of course, the color of passion, like the passions that have come to rule Lord Baltimore: the passion of his love and life now lost, a desperate passion to cleanse Europe of the plague he caused in a moment of passion long past, and his endless passion for bloody revenge. 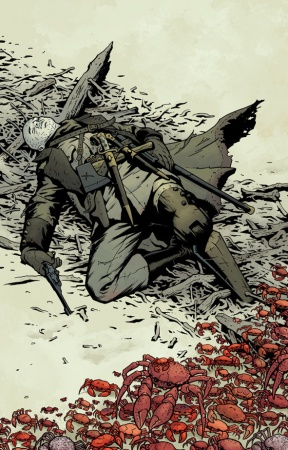 If you haven’t read anything in the Mignolaverse before, the bonus to starting with “Baltimore” is its approachability.  As it’s separate from the B.P.R.D. and its convoluted continuity, you don’t have to worry about wading through it all.  So far, there are two trade collections in print, “The Plague Ships” and “The Curse Bells.”  If even that seems like much to you, you could simply sample one of the recent set of one-shots, “The Play” or “The Widow and the Tank,” or the upcoming “The Inquisitor.”  Those three will be collected along with the most recent miniseries, “Dr. Leskovar’s Remedy,” in the third trade which will be out in a few months’ time.  We have been promised a fourth story arc (and accompanying trade) which will be the concluding act of the current storyline running through the comics, but Mignola has confirmed they’re interested in possibly continuing the story of the character after that.

If any of what I’ve said about the series piques your interest, I strongly encourage you to order the trades.  I’ll be ordering the novel myself–all this talk about “Baltimore” has me itching for more!