This week, I’d like to take a look at a little book that sneaked in last year under the radar for most mainstream comic book fans, but managed to steal the hearts of many of us here at Multiversity Comics.  That book was Kurtis J. Wiebe and Aluisio C. Santos’ “Grim Leaper: A Love Story To Die For.”  It’s a story about a man who died before he had a chance to meet his true love, but is given a second chance while stuck in a strange form of limbo.  He begins taking possession of people who are destined to die in the very near future.  Leaping from body to body, he soon finds he’s not alone in his curse, and a gruesome yet heartwarming courtship between two dead lovers begins. 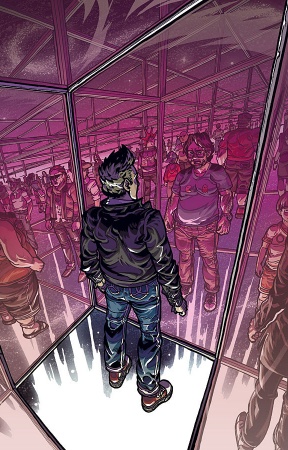 One of the great things about “Grim Leaper” is that this is the sort of story that could really only be produced in this medium.  The visual effects would be too expensive for most TV and film studios to consider producing such a quirky love story, but at the same time, the story requires those visual effects for full effect, and so could not exist in text or audio alone.  Only in comics could a story so unique truly succeed.  It combines excessive gore, romance, humor and action into an odd hybrid of horror and romantic comedy that succeeds at being all of the above at once.  I couldn’t see that happening in any other medium.

The story follows Lou Collins, a formerly living person who failed at picking up women in life, and seems doomed to continue his losing streak after death.  When he dies in a car crash, he finds himself jumping in to the bodies of people living in his home town–at least, living for now.  Each new person he possesses faces certain doom of some kind in the very near future.  Sometimes his possessions last a few days, sometimes hours or even minutes.  The only sure thing is that they will die, and after each time, Lou ends up in a strange hallway lined with the portraits of each body he has possessed, including his own.  At the end of the hallway, he encounters a portrait of the next host, which reaches out from the frame to swallow him whole.  He then wakes up in control of their body and he must figure out who he is now and where. 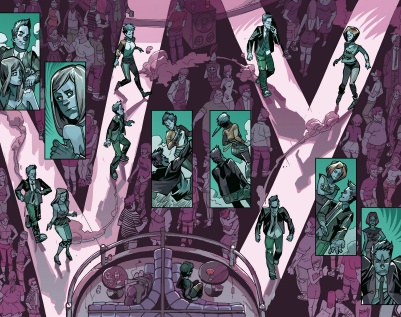 He usually ends up visiting the funeral of his previous host, where he shows he’s not exactly a gentleman by hitting on single female mourners because he heard that people are more likely to jump in to bed with a stranger when confronted with their own mortality.  Naturally, his creeper tactic fails, and he begins to lose hope–until he finds Ella Patrick, a young woman suffering from the same body-leaping curse.  He instantly falls in love and becomes determined to be with her, no matter how many times they have to die and find each other all over again.

Wiebe and Santos take full advantage of the freedom of comics.  I have already mentioned the gore factor; they go out of their way to make the characters die in some of the most unlikely and ridiculous ways possible: decapitation by a flying truck tire, bleeding out after a sudden jaw removal, split in two by a sudden encounter at high speeds with a telephone resulting in the head depositing itself in a post office drop box…you get the idea.  Perhaps it’s part of the curse, or perhaps Wiebe and Santos just wanted to have as much fun with the story as possible, but either way, it never feels too contrived or ridiculous.  It’s a perfect fit for the tone of the story. 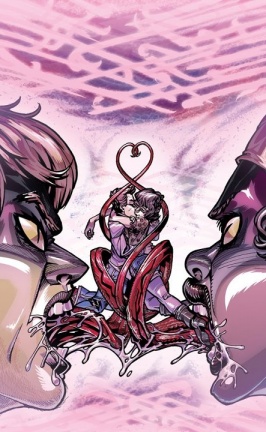 Santos’ artwork is a huge part of what makes the story work.  His style is simultaneously loose and bold, and amplifies the surreality of the script while simultaneously providing clear, well-paced storytelling.  I’m not sure many other artists could achieve that balance so perfectly.  After all, it’s difficult material to work with.  How do you make a gorefest endearing and humorous without being juvenile and detracting from the love story?  Apparently, by getting Santos to draw it for you.  “For you” isn’t even really the right way to put it, for as much as I like Wiebe’s words, the book is pretty much Santos’ baby.  After all, he doesn’t just draw the book, he inks, colors and letters it, too.

Each issue also features “More Love Stories To Die For,” a backup story from a series of talented comics creators finding some really interesting ways of mixing together the themes of death and love.  In #1, Joey Esposito and Jeff McComsey bring us “Drive Time Commute,” a fun little tale about two people falling in love while stuck in traffic.  “Love Sick,” by Ryan K. Lindsay and Daniel J. Logan, is a particularly disgusting tale about a gourmand realizing his wife has been fattening him up so he’ll be stuck at home while she goes out with other men, and so he plots his putrid revenge.  A man’s love for the Siri voice on his iPhone goes way, way too far in Jeremy Holt and Chris Peterson’s “Apple Of My Eye,” and, finally, a teenage girl with controlling parents and a psychotic ex-boyfriend finds a way to free herself of both problems so she can be with her true love in Ed Brisson and Johnnie Christmas’ “None Between Us.”  Every single story is excellent, and complements the tone of “Grim Leaper” perfectly. 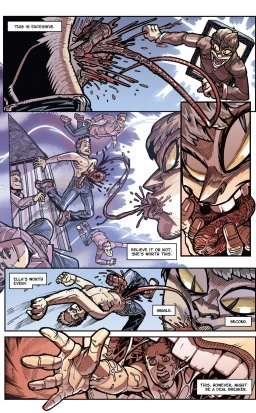 “Grim Leaper” is currently available in trade paperback at a reasonable $14.99, and comes with bonus art, alternate covers and concept sketches.  However, I’m not sure if it contains the backup stories, so you might want to track down the individual issues, if possible.  They may be difficult to find, as the series sold out pretty quickly after word got out about how good it was, but with a little effort and perhaps the aid of an online comic store, you should be able to track them all down.  Just don’t lose your head.