Hey you! Have you ever wanted to read some different comics? Hopefully! Do you have a friend who you are always trying to get into comics? Yeah, you probably have 20! Are you currently crying alone on Valentine’s Day with only a comic book paper mâché mannequin to hold at night? Good for you! If you answered yes to at least one of those questions then boy do I have the article for you! In Pageturn, I’m going to break down comics genre by genre and give you the best recommendations you can pester yourself and others into reading.

Some rules before we start (Even though I’ll almost certainly break all of them)
1. No superheroes
2. No Marvel or DC (maybe a sneaky Vertigo here and there)
3. Mostly modern reads 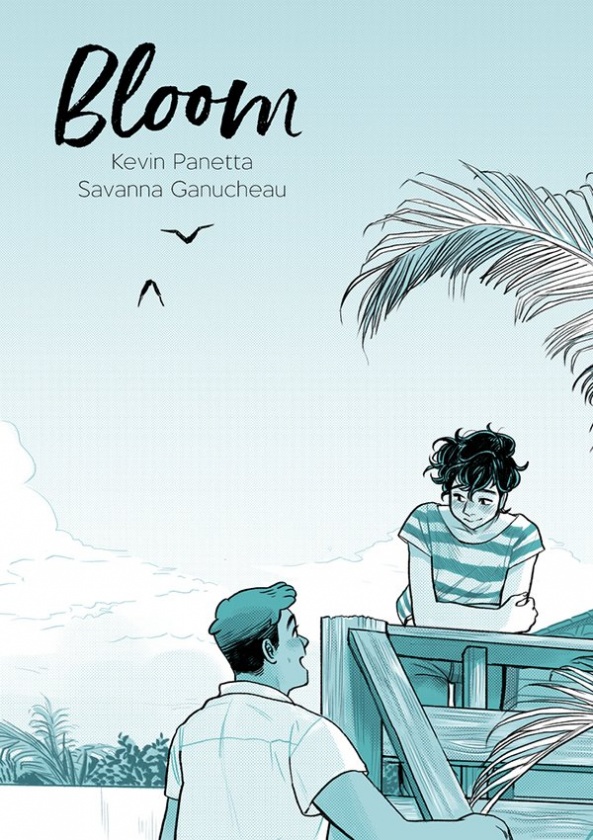 “Bloom”
Bloom is an unabashed love story that fits the bill perfectly. Protagonists Ari and Hector live in a small coastal town and work at the local bakery together, with Ari trying to get away from the area just as Hector is trying to find his place in it. Kevin Panetta creates a cast of characters who have sensitivities, aspirations and frustrations; slotting perfectly into the sensory-rich environment crafted by artist Savanna Ganucheau.

Part of “Bloom’s” charm is Panetta’s wholesome and well rounded depictions of gay men. The pitfalls in Ari and Hector’s blossoming romance doesn’t come from sexual confusions or repressions, instead from their own inherent predispositions and prior experiences. It helps them feel like characters who experience romance beyond their orientation, creating a truly genuine teen relationship that’s full of immaturity, inexperience and curiosity, as both individuals grow and learn about themselves through one another. Similarly, Ari’s interactions with his controlling family and increasingly distant friends reveal new vulnerabilities that leave you rooting for him even when he screws up.

Overall “Bloom” is just charming. Ganucheau drives the book at a leisurely pace; regularly interspersing the story with seaside vistas and baking recipes. The whole novel is full of beautifully pencilled and delightfully well-rounded characters whose lives intersect meaningfully and revealingly, hammering home a heartfelt thematic core. “Bloom” is romance at its most heartfelt and a perfect entry-point into the burgeoning world of graphic novels.

Grab it if you like:
-Queer lit
-YA romantic fiction
-Free recipes for baked goods

If you like “Bloom” read:
-“On a Sunbeam” by Tillie Walden
-“All Summer Long” by Hope Larson
-“Laura Dean Keeps Breaking Up With Me” by Mariko Tamaki and Rosemary Valero-O’Connell 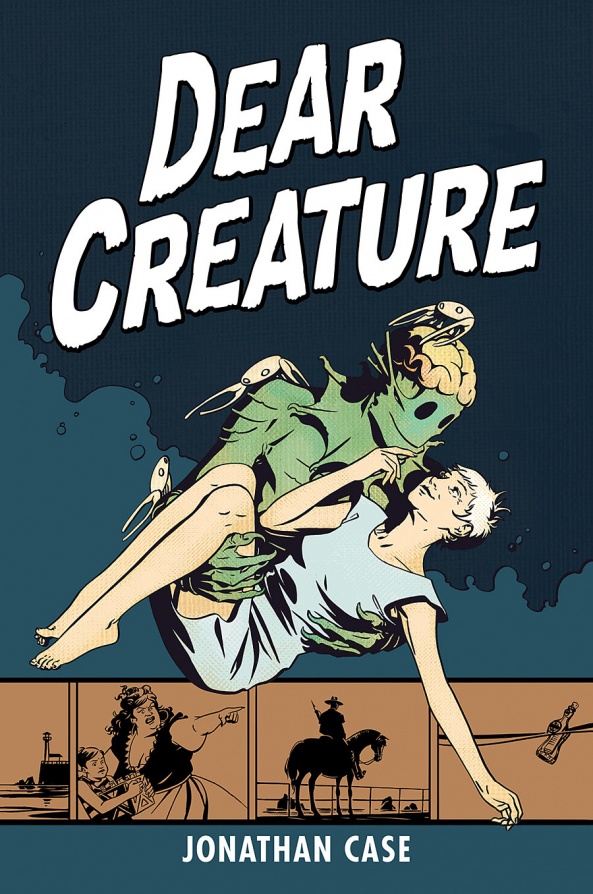 “Dear Creature”
To this day, I have no idea how I found “Dear Creature,” all I know is that one day I was trapped on a twenty-three hour flight from Melbourne to New York with a copy of it in my bag, and that the man who got off that plane was different from the boy who got on it. In essence, it’s Creature From The Black Lagoon written in iambic pentameter with quippy crabs and some Hollywood worship mixed in.

If you’re in love with film-irreverent romances like La La Land then I don’t know if “Dear Creature” will be a 1:1 fit, but it will definitely scratch the itch. The book works as well as it does because it puts a layer of glossy romance over what is ostensibly a horror novel; Johnathan Case’s erratic pencils make Grue, the man-eating monster, seem like a loveable extra from Spongebob rather than the nightmare monster he is. He still drowns beachgoers and eats the flesh of the unfortunate, but the reader sees him as a touching romantic because of just how endearing the book is. “Dear Creature” is not laced with as much melodrama as Shape of Water, so Case doesn’t have to spend pages justifying the ethics of his lopsided romance; we know that Grue is just Romeo trapped in a fishy body so we don’t have to ask about the hows and whys of his quest for love.

“Dear Creature” is heartwarming, unique and tonally fulfilling. The book is beautifully personal, it feels like the singular vision of Johnathan Case and it comes across as a loveable passion project because of that. “Dear Creature” is bound to have at least one element that appeals to you and will change your outlook on romantic fiction for the better. The monochrome art can be a little hard to follow at times, but once you’re past the initial hurdles it’s a great first read with a nice pace and a heartfelt story to tell.

Grab it if you like:
-Vintage Hollywood
-Monster Horror
-Shakespeare Recontextualised

If you like “Dear Creature” read:
-“The Creep” by John Arcudi and Johnathan Case
-“Mary Shelley: Monster Hunter” by Olivia Cuartero-Briggs, Adam Glass and Hayden Sherman
-“Hellboy” by Mike Mignola and various artists 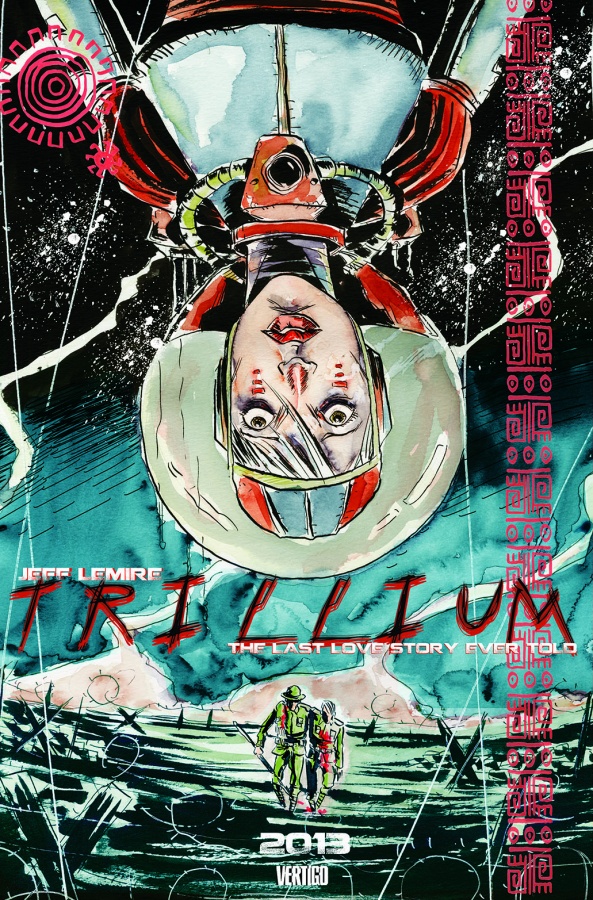 “Trillium”
“Trillium” is a dense, compelling book about a First World War veteran searching for a lost temple and an astronaut fighting against an apocalyptic virus, these two disparate lives and realities intersect over and over, with their bond tightening as they go along. Lemire isn’t necessarily trying to write a sci-fi, period piece or tragic romance; instead he takes all these different jigsaw puzzles, mixes the boxes together and makes a mosaic with the pieces he likes most. In the process he finds a way to blend the contrasting genres into parallel narratives that feel like a natural growth upon one another.

More than anything else, the book feels symmetrical. The mirrored protagonists are incongruent with the world they know and alien to the world they become trapped in, but in understanding one another they come to grips with their own life and relationships, and can find the similarities in it to the life of the person they love. It’s a great message that ties the whole novel together, with the narrative and the form being influenced by this idea of symmetrical protagonists caught in asymmetrical lives. However I’d say this also makes it the hardest comic on this list for a newcomer to read; Lemire constantly plays around with how the comic is read, so you never get a chance to settle into familiarity, instead getting flung between these different styles and structures. Alongside the fairly open-ended and non-linear story, readers should be prepared for a book where metaphor takes priority over plot and format is as fluid as story.

Jeff Lemire’s illustrations always carry a certain vulnerability to them and that fits the book perfectly, as both protagonists own self doubt is often as dangerous as any threat coming after them. I’d say “Trillium” reads better with a knowledge of what Lemire has authored in the past, seeing as he’s essentially meshing the themes and genres of past works like “Sweet Tooth” and “The Underwater Welder” and building on them organically, but on the flip side, you could just as easily use “Trillium” as a jumping off point into the delightful Land of Lemire. 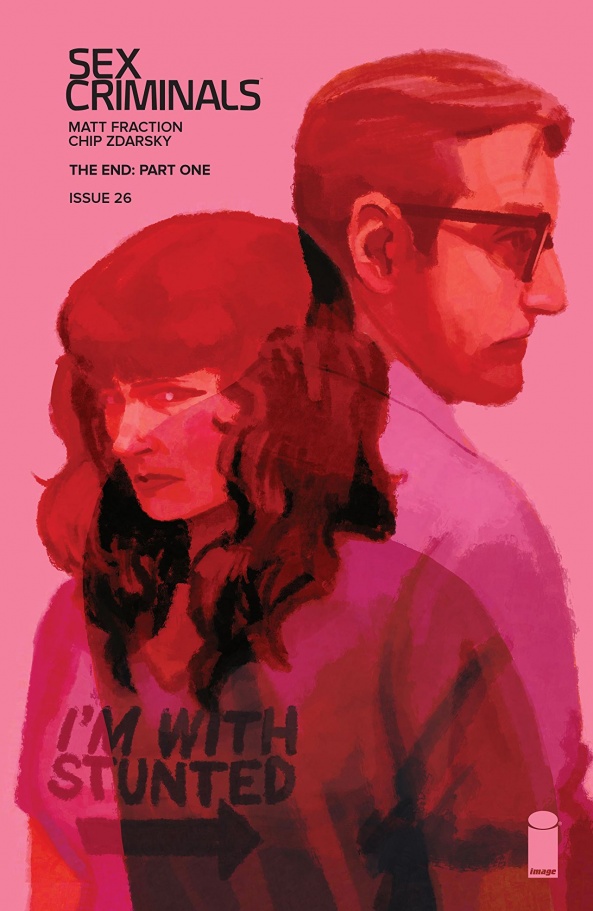 On the Shelf: “Sex Criminals”
Inarguably the best romance comic in stores right now is “Sex Criminals” it’s stupid and funny and immature, and most of all, it’s lovably genuine. The series follows two regular sex-pests -Jon and Suzie- who both discover they have the power to stop time when they orgasm. So naturally when they do the deed with one another they realise they have found a partner in crime and do the only logical thing you would do, rob banks in a post-sex haze to fight back against the neo-liberal system and fund the rapidly dying libraries of America.

Matt Fraction and Chip Zdarsky have made a series that’s happy to poke fun at itself, pull back the curtain and make you more than a little concerned that the book is just a way for Zdarsky to fund his out of control Coke addiction. But underneath the layers of innuendo lies a book that looks at how relationships live and die based on the circumstances of day to day life, our own mental health and the pressures society places on us. To great effect, it regularly puts aside the main plot to spotlight a side character, looking at how sex and relationships have molded them into who they are. For example, issue #13 looks at someone who’s asexual, issue #11 looks at someone who’s anime-sexual and issue #17 looks at someone who’s clay-sexual. It’s got it all!

In the end there’s no way I talk up this comic as much as it deserves, just track down the first issue, or the first trade, flick to a random page and I guarantee you’ll be smiling all the way to the register. Sex Criminals #26 is in stores right now, and is the beginning of the final story arc. So what better time to fall in love with a series than right before it dies in front of your eyes?

Grab it if you like:
-Subversive Rom-coms
-Self referential comedy
-Instructional guides on the worst (or maybe best) sex positions ever conceived

If you like “Sex Criminals” read:
-“Howard the Duck” by Chip Zdarsky and Joe Quinones
-“Superman’s Pal: Jimmy Olsen” by Matt Fraction and Steve Lieber
-“Saga” by Brian K. Vaughan and Fiona Staples

Rulebreakers
“Scott Pilgrim” is a beautiful graphic novel series that’s a little closer to Romeo + Juliet than “Romeo and Juliet.” Bryan Lee O’Malley’s illustrations are consistently creative, energetic and optimistic. Definitely give the film a watch too.

Tom King has written a trio of superhero romances of varying qualities; the most famous would be Batman and Catwoman from his run on “Batman” stretching from 2016 to 2019, which can be fairly hit or miss but does manage to use both characters to reveal emotional avenues of one another that other writers have rarely been able to encapsulate as well as King has here. The second would be Virginia and Vision from “The Vision.” The book travels all the way from their hopeful beginning to their inevitable collapse as King analyses family and acceptance through the filter of artificial life and the legitimacy of synthetic love. Finally you have “Mister Miracle” where we see the endearingly loyal connection between Scott Free and Big Barda, as their reliance on one another carries them through the stressful beginnings and seemingly inevitable failures that come from parental life in a world that feels doomed.

Finally, both Alan Moore and Scott Snyder have had seminal runs on “Swamp Thing” that have typified and reinvented the romance between Alec Holland, Protector of the Green and Abigail Arcane, Prodigal Daughter of the Rot. Their dueling elemental identities build a great contradiction into their relationship; they’re presented as poetically incongruent, while having such similar life experiences that they become each other’s only source of understanding in a hostile world. Alongside that, “Swamp Thing” paints a heartwarming picture of a romance that transcends the circumstances of everyday life; Abigail doesn’t blindly fall in love with a monster, she willingly chooses to love Alec Holland regardless of the burdens he carries. “Swamp Thing” is an existential nightmare and a somber reflection on the identity of humankind, but the romance at its core is an optimistic North Star that drags the reader through its horror and mystery towards the hope of understanding and belonging.

Thank you all for reading! Until next time, stay luscious, stay lavish and stay literary.