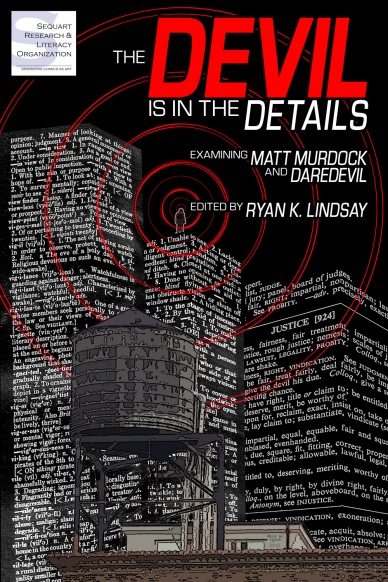 Not too long ago, we told you all about “The Devil is in the Details,” an essay book from Sequart about Daredevil’s role in comics. We even talked to editor Ryan K. Lindsay all about how the book was put together and the importance of Daredevil in the first place. We figure you’re already looking forward to it quite a good deal.

But, just in case you somehow need extra enticement, we’re going to give you a special advance excerpt from the book. Just for you. No one else. And we hope you like it.

The book debuts next Emerald City Comic Con and will be available for sale from Ryan at table G-01. Enjoy.

The Only Way is Down: Brubaker’s Saga as ’70s Cinematic Noir
By Ryan K Lindsay

Cultural knowledge indicates that Daredevil is the noir character of the Marvel Universe. This assumption is an unchallenged perception that doesn’t hold much water under any major scrutiny. If you add up all of Daredevil’s issues to date, the vast majority are not “noir.” Mild examination exposes Daredevil as one of the most diverse characters who has ever been written across a series of genres, from swashbuckling romance, to absurd space opera, to straight up super-heroism and, often, to crime saga. Daredevil gets play in nearly all corners of the realm of narrative, and yet the mind often reverts to considering him a noir character.

While Daredevil has often been a crime book – some would argue this is when he is at his best – and there have been bleak moments peppered throughout his history, his actual incidences of true noir are few and far between. Noir is not just crime, a distinction often misunderstood. Noir is a sub-genre of crime, predicated on one larger factor – there are no happy endings. If you won’t pull the trigger at the end of your tale, you have not created a noir story; you’ve simply told a crime tale.

The most accurate representation of Matt Murdock inhabiting a noir world is when the love of his life, Elektra Natchios, dies in his arms – one of Marvel’s most shocking moments (in Daredevil #181, Apr 1982). Though Daredevil exacts a form of revenge upon Elektra’s murderer, the heart of the tale is Elektra’s demise – a bleak ending for their love. It crushes Matt for a long time after – with him even digging up her body in the very next issue and cradling her dead face once more. Such a dark act represents the prime example of Daredevil as a noir character, but perhaps also the only example.

Frank Miller’s follow up tale, years later, of the bleak destruction of Matt Murdock as a man in “Born Again” (Daredevil #227-233, Feb-Aug 1986) feels like a noir tale and even holds the utter desolation well past the halfway mark of the narrative. It could have become a noir masterpiece, yet lacked conviction as it approached the finish line. This doesn’t lessen the story – though it could be argued excising Nuke from memory would lift that storyline into the realm of perfect – but it removes the tale from the noir column. If you look through Daredevil’s darkest moments, they never stick the landing into the inky depths, because that’s so rarely what comics do. Comics are a perennial second-act medium, and ending on a bleak note means you might have to start on one as you cycle through, and that’s no place to jump into the next arc.

Daredevil was a book (and character) darker than most, but he was not a true noir player until Ed Brubaker took over the title. Under Brubaker’s determined direction, Daredevil became a hero analysis akin to a pulp ’70s flick, full of the unending knowledge that the world is going to beat you down. Every time. You can divide Brubaker’s 52-issue run into two noir sagas – of which the first (itself made up of three segments) will form the majority of this analysis – and both are informed more by the anti-heroes and worlds of ’70s subversive filmmaking than by super-hero comics of the preceding four decades. These films represented a noir turn, in which it wasn’t just the main character who was doomed to failure, it was the entire world, and during his tenure Brubaker certainly showed that no matter where Murdock went, darkness would find and embrace him tightly.