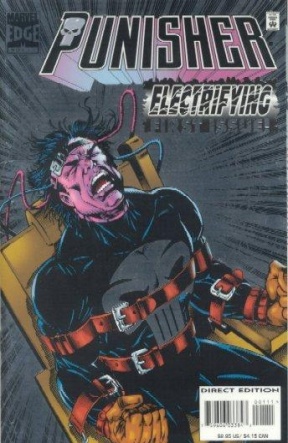 The Punisher #1 (1995)
Written by John Ostrander / Illustrated by Tom Lyle / 22 pages
This issue comes with an eye-catching foil-stamped cover on thick stock. It was part of the Marvel Edge line, which was created in 1995 to house the more “adult” titles from Marvel. It lasted six issues.

The first page is a Daily Bugle column explaining Castle’s origin and recent events in his life, including his accidental murder of an innocent family, his targeting of Nick Fury, his arrest, and his impending death sentence. These are clarified with some extra detail in the next couple pages with flashbacks. I assume these events happened in some earlier Punisher book, but there are no helpful *see ish # boxes. It’s not important, though, as the narrative uses this as a starting point but quickly moves on to better things. Castle approaches his execution peacefully until Bullseye, disguised as a priest giving last rites, privately reveals he killed the family Castle feels so guilty about. After being electrocuted and pronounced dead, Castle’s body is taken to a warehouse where he wakes up. Turns out, his death was faked by the head of a crime family. The Don, who has used his authority to keep his neighborhood drug and violence-free, is dying and wants Castle to take over for him. After showing him around to prove it’s not a gag, the Don is attacked by none other than Bullseye. Castle subdues Bullseye, but doesn’t kill him. He decides to accept the Don’s offer as protector of the neighborhood.

Ostrander reveals Frank’s character easily enough through his attitude toward his sentence: guilty, resigned, and with a black-and-white view of the world. Lyle’s art is typical of the era, with large, muscle-bound men and big hair. Fortunately, Castle sports a buzz cut. The premise is solid, if not necessarily ground-breaking: a cold, merciless man with a guilty conscience gets a shot at redemption. Because this is the Punisher, it’s a good bet any character development will eventually be undone. When the story’s written well enough, it can still be a fun ride.

Final Verdict: A surprising 8.0 – This was the issue from which I expected the least, but after reading it I plan to track down more from the run. 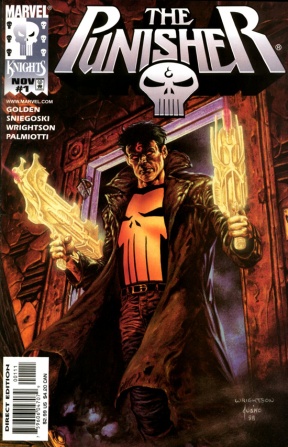 This issue was part of the original ‘Marvel Knights’ run under Quesada and Palmiotti, and was supposed to be to edgy for children, but not too edgy for teenagers. It lasted four issues before being replaced by the more popular run by Ennis.

It opens with a two-page spread introducing the Punisher, and for some reason saw fit to devote two thirds of its effort to a fight with Ka-Zar, of all things. After a few pages of people in Brooklyn having hard lives and building a shrine in an ally to a man who committed suicide, the Punisher shows up at drug house with magic guns and glowing eyes. After Castle kills some mooks, the narrative switches to a church where a demon and some look-alike goons attack a couple guys who are praying. Turns out, the two guys are angels. The demon kills one of them, and then very awkwardly reveals his origin. The story switches back to Frank, who stops a wife beater before being called “Frankie Castiglione” and realizing he has some memory loss. He’s led by ghosts of his family to the angel who previously escaped the demon. Before dying, the angel sends Frank to a different angel. When questioned by the Punisher, this third angel reveals he was supposed to be Castle family’s guardian angel, and it’s his fault Castle’s family died. Frank takes this poorly.

The writing lacks subtly, and relies on various archetypes instead of developing characters. The scene with the domestic abuse is a great example of taking narrative short-cuts and telling instead of showing. Some of the dialogue is almost painful (“I didn’t give you permission to go out! I’ll kill ya!”). Golden and Sniegoski had no problem with using narration to describe events, and this seems like a great place where letting the reader’s imagination fill in the details would’ve been better. The art was clear enough to follow the action, but various faces were awkward and…sick is the word which comes to mind. The angels especially look too thin to be healthy. The premise is ok on its own, but a terrible choice for “Punisher.” His character is rich enough without trying to inject the supernatural into it.

Final Verdict: 2.0 – I can think of no reason for someone to read this. Anyone looking for stories about heaven and hell can find much better material in “Ghost Rider.” 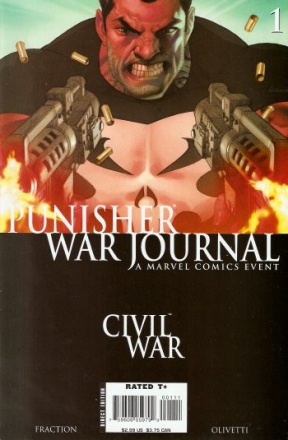 This volume of “War Journal” was the character’s first series set in the main Marvel U since the end of the 1995 series reviewed above. Perhaps to emphasize its connection, the series debuted as part of Civil War, and later tied into World War Hulk and Secret Invasion. The series lasted 26 issues.

The issue foregoes any kind of recap page, expecting the reader to know the whos and the whats from the outset. This version of Castle is talkative, and the pages are filled with his inner monologue. While Frank is staking out a pedophile, Stilt-Man interupts in an attempt to apprehend the pedophile. Frank ends up killing them both. After SHIELD fails to capture him, Frank visits some tech guys who supply supervillains. While there, CIVIL WAR CROSSOVER. While seeking proof Tony Stark sucks, he rescues Spider-Man and CIVIL WAR CROSSOVER. A contractor for SHIELD resigns so he can better track the Punisher, and then there’s one last CIVIL WAR CROSSOVER on the final page.

This issue probably read better during “Civil War.” Outside of the event’s context, it seems needlessly complicated by situations unrelated to the plot. Stilt-Man’s being reformed? Iron Man aiding villains? Spider-Man being beat up in the sewer? Captain America’s safehouses? None of these are explained in sufficient detail for this issue to stand alone, and the extra-sized issue ends up spending half its time telling someone else’s story. The art is stylized, and most of the characters are oddly proportioned. The first time he leaps into action, the Punisher’s head looks to be half the size of his forearm, and 1/5 the width of his shoulders. The final splash page also has terrible proportions, giving the impression Captain America’s waist is the same height as Castle’s knee. Olivetti draws the three characters from three different view points, and the setting is in a fourth. It’s like he drew the four pieces of the scene separately and then put them together with a photo editor.

Final Verdict: 4.5 – Browsed in the context of “Civil War,” the book might be worth someone’s time. 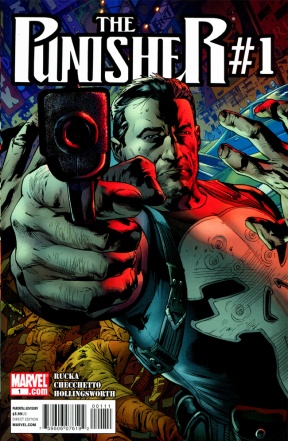 After a brief prose recap of Frank Castle’s origin, the issue opens silently on characters who will become the book’s supporting cast – one is target shooting, one is sitting with a dog, and one is getting married. Still silent, the wedding is caught in the crossfire of two rival factions and most attendants are murdered. Dialogue begins when the scene is being investigated by two detectives. After collecting some information, one of the detectives is contacted by the Punisher for the information. From there on, the two detectives are one step behind the Punisher as he tracks down the perpetrators with deadly force. The main story ends with Castle letting one shooter live, and having never said a word. This issue also features a back up story told by voice over in the form of an interview transcript. It reveals how the Punisher recruited the detective as a source and parallels the official story in text with the actual events in images.

It’s hard to describe Rucka’s writing without mentioning Checchetto’s work at the same time. With so much of the story told by images only, the two are almost inseparable. It would be neat to see a script for the issue and know how much of each scene was dictated by Rucka and how much Checchetto ad-libbed. The book is an unusual number one for focusing on everyone but the title character. Castle is treated like a force of nature the rest of the cast reacts to, instead of interacting with. The bold move works, and this story just has the feel of an epic narrative.

Final Verdict: 7.5 – A solid buy, and the issues got better every month.

Fans of the Punisher probably noticed a distinct lack of Garth Ennis “Punisher” on this list. There are two reasons for that. I’m not a big fan of that run (a minority opinion, I know), and I couldn’t find them for a dollar or less for this review. I’m willing to spend money for this column, but not that much.

Over two decades ago, “New Warriors” burst onto the Marvel scene with the slogan “Heroes for the 90’s!” In that time, they’ve appeared in one form or another across four volumes and over one hundred issues. Each new series had a unique creative team and direction, which leads one to ask: which debut issue was […]

The next round of New 52 cancellations includes the eight volume of “Blue Beetle,” so it seems like a perfect time to compare the two titles which have starred Jamie Reyes as the azure arthropod.Blue Beetle #1 (2006)Written by Kieth Giffen & John Rogers / Illustrated by Cully HamnerFrom the pages of “Infinite Crisis” the […]

By request! Which of these three first issues is the best, and are any of them good enough to warrant further reading?Before we get to the actual evaluation, I should probably start with a little editorializing. I’m not an X-Fan. Prior to reading the three issues in this column, I can safely say I’ve only […]