“Bats” from the “Science Comics” collection at First Second is a fun and informative read, getting us on the same page as the much-maligned creatures of the night. 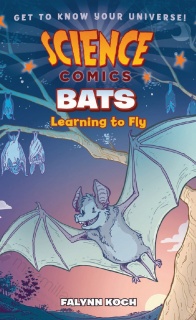 Written and illustrated by Falynn Koch

Every volume of Science Comics offers a complete introduction to a particular topic―dinosaurs, coral reefs, the solar system, volcanoes, bats, flying machines, and more. These gorgeously illustrated graphic novels offer wildly entertaining views of their subjects. Whether you’re a fourth grader doing a natural science unit at school or a thirty year old with a secret passion for airplanes, these books are for you!

This volume: In Bats, we follow a little brown bat whose wing is injured by humans on a nature hike. He is taken to a bat rehabilitation center where he meets many different species of bats. They teach him how they fly, what they eat, and where they like to live.

Where are all my Stellaluna kids? No? Silverwing?

Look, us millennials have a thing for bats. I can’t explain it. And happily, Gen Z has a bat obsession starter kit in the form of “Bats” from Falynn Koch. Using a pithy balance of storytelling and fun facts, “Bats” offers a wealth of information about the flap-flaps of the night. (That’s literally the etymology of “bat”, by the way.)

At the start we meet a little brown bat in the midst of a disastrous encounter with a group of tourists; we then follow his story through a trip to a rehabilitation center, and through his encounters with other bats there. By means of their conversations, we learn about the different ways bats live as well as the different ways they wind up in trouble.

The narrative is simple but engaging, getting us invested in the little brown bat’s plight and then in the stories of the others. The stories are mildly upsetting but true to life – attacked by a cat, interrupted in hibernation, or chased away from home. Sometimes active human interference is at fault; sometimes it’s an accident.

The narrative is intercut with short explanatory sequences highlighted in blue, which get into the nuts and bolts of bat’s lives. From echolocation to hibernation, these inject scientific detail into the story without overwhelming with too much information at once.

Throughout, the layouts are versatile and graceful, with the explanatory sequences often moving horizontally across a spread, below the action. This lets you choose when to flick your eyes down and read them – an unusual, but effective, way of organizing the comic.

Overall, Koch’s art style is deft and versatile, setting dynamic characters against minimal backgrounds. The compositions are varied, keeping the eye busy but not overworked as we move through the story.

Since bats are our protagonists and main angle into the story, they have to be expressive, and they certainly are. They come across as cute and full of character without sacrificing the structural details of their faces – the same features that can make bats scary. It’s no mean feat, but from vampire bats (look at those cheeky boys up there!) to flying foxes, they’re all lovely to look at.

(A fun thing I barely noticed at first: when the bats converse, we hang upside alongside them so we can view them right-side-up.)

The human characters that feature in the narrative are warmly portrayed, and while they occasionally edge on cloying, they successfully toe that line. Through Rebecca at the rehabilitation center, and her teenage intern, Sarah, the interventions that can save bat’s lives are deftly explained. Koch is also keen to draw a connection between the misfit nature of bats and teenagers – which I don’t think anybody would argue with.

For a comic about nocturnal creatures, the colours are surprisingly bright. As the bats converse amidst the earth tones of the rehabilitation center, the backgrounds shift into lime green and cerulean, punching up each page with additional visual interest.

Similarly, for a comic with so many competing voices – like a group of bats discussing different things to eat – the lettering never leads us astray. Even at the more dense explanatory moments, the large amount of information per page is managed with apparent ease.

The book concludes with a few brief, practical tips as to how humans can lend bats a hand. Often, it comes down to “leave them alone” – avoid interrupting their hibernation, for instance. Or, you can go so far as to build a bat house. It’s all concisely explained and easy to understand.

The engaging flow of information makes “Bats” suitable for a broad spectrum of ages, as well as a handy educational tool. A brief explanation of the (distinctly un-bird-like) way bats move through the air would even make it pair well with “Flying Machines”. All told, it’s a great read, and should flap-flap its way into any nature lover’s heart.