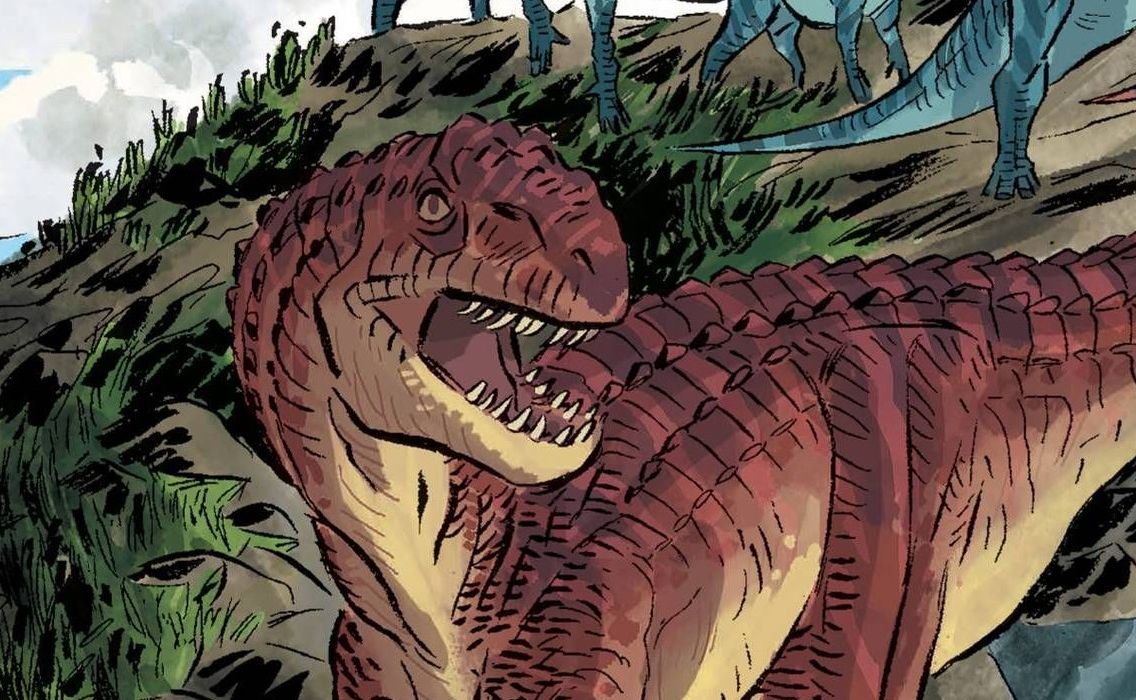 Balancing facts and fun – and getting into some genuine silliness – “Dinosaurs” makes for an engaging addition to First Second’s Science Comics series. 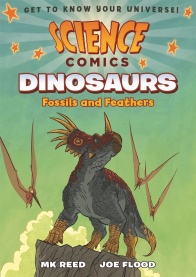 Every volume of Science Comics offers a complete introduction to a particular topic–dinosaurs, coral reefs, the solar system, volcanoes, bats, flying machines, and more. These gorgeously illustrated graphic novels offer wildly entertaining views of their subjects. Whether you’re a fourth grader doing a natural science unit at school or a thirty-year-old with a secret passion for airplanes, these books are for you!

This volume: in Dinosaurs, learn all about the history of paleontology! This fascinating look at dinosaur science covers the last 150 years of dinosaur hunting, and illuminates how our ideas about dinosaurs have changed–and continue to change.

I’ve reviewed other Science Comics entries, and they never disappoint; they maintain a reliable mix of information and entertainment, and they don’t feel targeted toward any particular age. And, in focusing on the history of paleontology, rather than on dinosaurs themselves (and what is our knowledge of one without the other?), this entry explored a lot of things I’d been wondering about.

Most remarkably, we begin with early civilizations’ encounters with fossils, something I don’t remember learning about as a kid. From ancient Greeks mistaking mammoth fossils for cyclops skeletons, to dragons popping up in legend all over the world, a history of early paleontology is sketched in for us.

As we move forward, MK Reed makes it clear that the history of paleontology as most know it (beginning in the 1800s) was marked by extraordinary pettiness, with rivalries between scientists alternately spurring on and getting in the way of discovery. (Seriously, Richard Owen’s beef with Gideon Mantell – and Owens’ bad behavior in general – could supply plot for ten comic books.) When scientists weren’t busy calling dibs on fossil-rich land, debates about the configurations of skeletons got heated, and often led to ridiculous conclusions – like a derpy-looking Iguanodon.

Throughout, the overlooked female pioneers of paleontology are given their due: Mary Anning’s discoveries in Dorset occupy an early section of the book, Mignon Talbot’s 1911 paper on Podokesaurus holyokensis is given a nod, and much later, Marion Brandvold’s discovery of dinosaur nests provokes a major turning point in our understanding of dinosaur behaviour.

Joe Flood’s bold art sweeps us into the narrative seamlessly, balancing textbook-like reproductions of the dinosaurs with a more fluid approach to the human beings. In portraying the rivalries described above, Flood’s characterizations match the ridiculousness of the proceedings blow-for-blow, with various, caricatured faces, as well as some decidedly villainous posing for Owen.

With one of the challenges of paleontology being figuring how just how dinosaurs stood and moved, Flood’s portrayals do an excellent job contrasting different postures and centres of gravity as the conceptualizations of the dinosaurs continue to evolve. His dinosaurs have palpable visual weight as well as grace, and, when it comes to sneaky boys like Velociraptor, a cat-like, beady-eyed viciousness that’s pretty adorable.

The book’s most stupendous visual moments are the double-page spreads, whether they portray dinosaurs or not; featuring broad vistas and confident compositions that guide the eye around the spread, they impart scale and a sense of wonder to the book as a whole.

I feel like a lot of books about dinosaurs fall into an earthy green-and-brown trap – and colouring, for dinosaurs, is always going to be a hotly contested issue – but Flood’s palette is adventurous without being overly fantastical. We get our brightest tones on the feathered dinos (and, as the book clarifies, that’s way more dinos overall than we previously thought).

Structurally, the most interesting device in the book has the narration checking in with us every once in a while, recapping everything known about dinosaurs in a given year. Every time we check in, the scientific world’s understanding of dinosaurs – and the probable age of the Earth – has changed dramatically. It’s an excellent tool for comparison, demonstrating the leaps in understanding that occur in as little as fifty years.

All in all though, I’d say the most remarkable aspect of “Dinosaurs” is its playfulness, to the point of irreverence. As you move through the book, you’ll encounter a caricature of Owen with a butt as a head, you’ll stare down a group of ominous chickens (they outnumber humans on Earth, after all), and you’ll watch dinosaurs avoid talking to Brontosaurus, because his whole situation is just… Awkward.

Rather than doing a disservice to the educational content, however, this playfulness is delivered in the just the right doses, keeping the overall tone light and fun. The book would move as quickly and be as interesting without it, but levity for levity’s sake is worth appreciating.

All told, “Dinosaurs” is a wonderfully engaging read. It kept my attention through a record-high heatwave here in Montreal, which is no mean feat. (If it lasts much longer we’re all going to start burrowing like Oryctodromeus, I swear.) Weather aside: this one’s great for reading on your own, as well as sharing with little dino fans, and makes for an exemplary non-fiction comic. 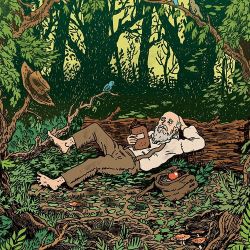 “Johnny Appleseed” is a wandering, rough-around-the-edges read – a dense work that puts a spotlight on a folk hero of the 19th century, and comes up with kernels of insight.Written by Paul BuhleIllustrated by Noah Van SciverJohn Chapman, aka Johnny Appleseed, made himself the stuff of legend by spreading the seeds of apple trees from […]