Welcome, one and all, to my Summer Comics Binge for 2019. I’m doing a post-“Crisis” Shazam read through, tackling all the major stories featuring the Big Red Cheese, starting with his formal introduction to the DC Universe proper, “Shazam: The New Beginning.” From there, I’ll be following a (somewhat) straight line through his various appearances in “Legends” and “Justice League,” his strip in “Action Comics Weekly,” and, eventually, into Jerry Ordway’s “The Power of Shazam” graphic novel and subsequent series.

I’m open to making detours as they arrive, to allow for getting as full a picture of the Post-Crisis Captain Marvel as I can. I’m not exactly sure where I’ll be wrapping this up, but I think I’ll be covering everything up through “Shazam: The Power of Hope.”

This is also a continuation of the series I did with the New 52 “Shazam” backups, the Chronicles of Shazam. So basically, its your one stop Shazam shop.

Anyway, that’s enough preamble. Today, we start with “Shazam: The New Beginning.” This is the integration of the Marvels into the DCU, and is the first true re-telling of his origin…well, ever. There were some updates in the 70s when DC was doing a combination reprint/new stories book, but this is the first wholly new origin since the beginning. Let’s dig in. 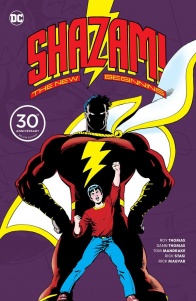 1987’s classic origin story for the World’s Mightiest Mortal is back in SHAZAM: A NEW BEGINNING 30TH ANNIVERSARY DELUXE EDITION!

He was one of the greatest heroes of comics’ Golden Age—a square-jawed colossus with a child’s optimistic spirit. Then a great crisis came that destroyed his world and erased his adventures from history.

But even during the grim and gritty era that followed, this force of pure goodness continued to shine through the gloom like the bolt of lightning that strikes whenever young Billy Batson says the magic word…

Then, in 1987, the celebrated saga of the orphaned boy with godlike powers began anew. Under an all-new creative team, DC’s Captain Marvel was reimagined as a 15-year-old teenager—one who is fated to grow up much faster than he’d hoped.

“The New Beginning” does a pretty remarkable job of giving a full picture of the Shazam world, while also streamlining a fair amount in the process. A new location (San Francisco), a new connection to Sivana (Billy’s mom’s step-brother), and a technological upgrade for his part-time career (television instead of radio) are among the changes to the origin story, but all the key elements are present. Aside from Billy’s family situation, much of the origin would be recognizable to anyone who saw Shazam, at least in the broad strokes.

Tom Mandrake does a really nice job of allowing the artwork to remain tied to the classic Fawcett stories, but not allowing the book to be stuck in the past. He shaves off some of the extremes in the character designs, but never enough to lose what makes them unique. Uncle Dudley looks a little less gin blossomed and with a slightly less bulbous nose; Sivana still has mole-like qualities, but he’d blend in slightly more at the mall.

The Fawcett comics aren’t exactly the easiest to bring into the modern era, either visually or story-wise, and Mandrake and the Thomases do their best to make that transition as smoothly as possible. A big part of that is counter-intuitive to the purpose of the book, which is to differentiate Captain Marvel from Superman, and give him a distinct identity within the DCU. But if you’re not going to make him fit in a little more, you’ve got to sacrifice some uniqueness.

But the Thomases did one really clever thing that set apart Captain Marvel for the past thirty years: until this series, when Billy Batson changed into Captain Marvel, he didn’t retain his youthful personality. Billy and Cap were two different people who shared a body (sort of?). Now, it was Billy’s mind staying put, and it made the character infinitely more interesting.

In terms of Cap and Black Adam – also introduced in this series – their looks and power sets are essentially the same, and that’s a good thing. These costumes are among the best in all of comics, and the simplicity of both the color scheme and the lightning logo really pops, regardless of era. Black Adam has little of the nuance that would come in future iterations, but neither does Billy. This is a very black and white, good versus evil story. Aside from a brief trick Sivana plays on Billy, no one here is hiding anything. It’s all very straightforward.

Mandrake’s art is where the story gets a little less standard, and his work, along with that of colorist Carl Gafford, sets the book apart, especially when viewed 32 years later. Books simply don’t look this way anymore, with pop art splashes of color and really bold choices in terms of perspective and framing. It’s not exactly revolutionary, but this feels like a comic of its time, which is to say a little looser and less constricted by convention than a comic from today.

Mandrake is more concerned with visual storytelling than he is with perfect draftsmanship, and so there are lots of panels that are inked in really dramatic ways that, technically, wouldn’t happen in the ‘real’ world, but set a tone for the scene that can’t really be topped. I truly miss the freedom that artists had to put the story above all else from this era.

The one really odd bit of this series is a momentary flashback to the pre-“Crisis on Infinite Earths” era of Shazam stories, with Billy suddenly seeing/remembering Mary Batson and Freddie Freeman. It isn’t dealt with in any real manner, and is basically there to allow older fans a moment of recognition and, perhaps, a hint that we will maybe see this characters again down the road. But for a hard reboot, it’s a weird move; especially when this is the first real attempt to integrate these characters into the mainline DCU.

But overall, this series does exactly what it set out to do, and did so while adding some pathos to Batson’s story. Instead of meeting him as an orphan, we see his parents’ deaths through his eyes, and their loss has a Sivana-shaped mystery within it. This clearly was intended as a ‘New Beginning’ for the character, and I’m excited to see where it goes from here.

The Chronicles of Shazam: “The Trials of Shazam” Part 1

***Record scratch***So, today was supposed to be the final ‘preamble’ to “52” installment of this column. But a number of my Multiversity responsibilities have crashed into each other. Two of the events I was to cover, “Day of Judgment” and “Infinite Crisis,” will be covered in great detail in a few weeks on the DC3cast. […]

The Chronicles of Shazam: Minor Appearances and Super Battles (2003-2005)

Welcome back to the Chronicles of Shazam! We are in a very fallow period for Captain Marvel and the Marvel Family, but this week we did get a few choice things to discuss. Let’s dig in!1. Category One: Minor appearancesIf you’ve been reading this column with any regularity, you’ll know that I’ve been harping on […]

Welcome back, one and all, to the Chronicles of Shazam! This week, we are looking back on 2002-2003 for the Marvel family, which was really just a bunch of Freddie and Mary stories. Let’s dig in!Category 1: The TitansFreddie Freemam joined the Titans L.A. in last installment, and here he gets a taste of being […]