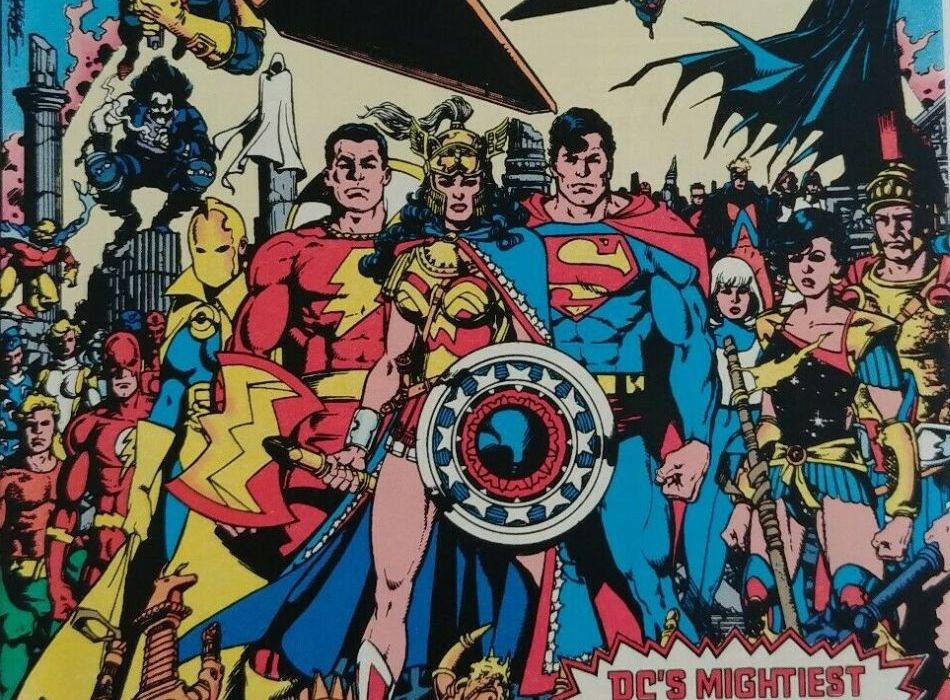 In this week’s Chronicles of Shazam, we look to Captain Marvel’s second big introduction into DC continuity post-Crisis. Sadly for him, aside from some appearances in the Superman titles after this, it would still be nearly 4 years before there was an ongoing title featuring the Marvel family.

After sitting on the shelf, more or less, from the end of his “Action Comics Weekly” stint at the end of 1988 (no joke, he appeared in exactly one issue in that time, of “Books of Magic.” But more on that next week), Captain Marvel popped back up in 1991’s the ‘War of the Gods’ crossover. Cap played a fairly major role in the 25 part event, built around George Perez’s “Wonder Woman” run. I say ’25 part crossover,’ but I read more than that to prepare for this read. “Wonder Woman” #50-57 act as an extended prologue for the series, and Donna Troy, a major part of the story, has her pieces of the story established in two issues of “The New Titans,” so I read all of those as well. And, “Wonder Woman” #62 is a true epilogue, and featured Earth’s Mightiest Mortal, so I had to include that, too. So, 36 parts all told. My initial plan was to follow every editor’s box back, but some of the minutia was just too small, even for me, and some would’ve required reading an entirely different crossover (“Armageddon 2001,” one of the events that was received the poorest both at the time of its publication and today).

But in addition to being an important Captain Marvel story for a few reasons, it was also a lot of fun to dig into a corner of the DCU that I’m not all that familiar with. I’ve read plenty of Wonder Woman stories, but I’d never (until now) really checked out Perez’s run. Based on this chunk of the run, I may go back and read the entirety of his time on the book.

In a similar vein, this crossover gave me a chance to read some books that I had never encountered, or had not encountered in quite some time. This crossover somewhat pre-dates my fanatical reading/collecting (that came just before “Zero Hour” a few years later), so this all read brand new to me. I was still buying comics, based on their covers, off of spinner racks at this point, so I may have had a few of these issues, but I don’t remember any of it. And the scope of this crossover touched so many corners of the DCU, that this feels like a really good snapshot of just where things were in 1991.

Which is to say, overall, things were in a pretty good place, but transitions were afoot. Tim Drake was just introduced as Robin, Perez was wrapping up his five year run on “Wonder Woman,” “Justice League Europe” would essentially reboot shortly after this, and “Starman” and “Doctor Fate” would see both their series end within a year. By the time “Zero Hour” wrapped in 1994, there were different characters with those monikers running around the DCU, as well.

This series is incredibly ambitious in scope, both in terms of publishing and storytelling. While there are plenty of crossovers that feel like only the ‘main’ series is needed, this is not one of those. In fact, I can’t imagine following the story all that easily if just reading the miniseries, or even just the miniseries and the “Wonder Woman” issues. So many threads are established and developed in side issues that the ‘main’ books frequently reference, the story would be pretty hard to follow without them. The main story would still somewhat work, but the reasons for characters popping up/having a reason to get involved.

The basic gist, because I don’t want to spend too much time discussing plot mechanics, is that Circe is attempting to use Hecate to pit the various gods of different regions against each other. We see gods from Norse, African, Greek, Roman, and Native American traditions, to name just a few. Hell, even the New Gods get in on the action. Its scope is incredibly ambitious, and allows the story to play across various places on Earth and in space, and to involve most of the ‘major’ DC players at the time.

In the first issue, Captain Marvel is corrupted by the Roman gods to be their warrior in battle, and he finds himself pitted against Wonder Woman, the chosen avatar of the Greek gods. After the initial encounter, Cap is back to being himself, personality wise, and pops up a few times in important issues. For the purposes of this column, I want to focus on two issues in particular. The first is “L.E.G.I.O.N. ’91” #31, which essentially is a space battle between Lobo and Captain Marvel. 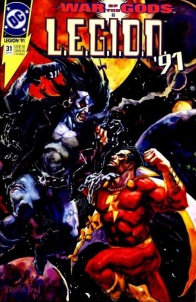 This issue features one of the most polite, least prone to confrontation characters in the DC Universe, Captain Marvel, and the main man himself, Lobo, in a really fun, if slight, confrontation. Cap literally crashes into Lobo in a space canteen, and when he apologizes and tries to buy him a drink, a melee ensues.

Part of what makes this issue so engaging is the really fun Barry Kitson artwork. Kitson draws Lobo in all of his early 90s glory, with muscles on muscles, and attitude dripping off of him. Cap, on the other hand, is drawn as conservatively and old-fashioned as possible. Kitson, visually, matches the script’s ‘fish out of water’ tone by allowing the two characters to be such polar opposites of each other. Lovern Kindzierski’s colors play that out as well, with the red of Marvel’s suit only really popping up again in Lobo’s eyes.

The main issue I want to discuss though is “War of the Gods” #4. 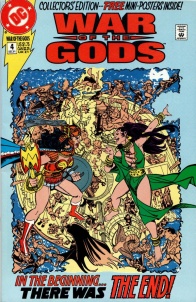 This issue features two things I want to discuss. The first is that it gives the first post-Crisis (and maybe first ever?) description of how the wizard Shazam came about acquiring the powers of the various gods. This was something that had never really crossed my mind before, which is funny, because it is a huge part of the stories that are being told, obviously. But more than that, it also discusses why the individuals behind the SHAZAM acronym – Solomon, Hercules, Achilles, Zeus, Atlas, and Mercury – come from different traditions (Solomon from the Judeo-Christian tradition, Mercury, Atlas and Hercules from Roman mythology, Zeus and Achilles from the Greeks).

I’ve been reading Shazam comics for 30+ years, and I never really considered the various traditions found in those six figures. Perez handles this sequence really well, trying to make some sense out of what is a really weird mix of religious traditions. He also illustrates it in a way that somewhat connects the various traditions, without removing the uniqueness from them. It’s a really masterful job and, again, it’s a job I didn’t even realize was necessary!

The second bit here that is a ton of fun is that the Wizard ‘steals’ the Metal Men to allow them to be vessels for the six powers again, so he can essentially re-start an ailing Billy Batson. Using the Metal Men in this way is downright inspired, and elevated this part of the story considerably. Black Adam plays a role here too, as well as ‘joining’ the Suicide Squad for their tie-in issue. This was when Adam was colored a really ashen tone, which doesn’t really read as Egyptian, but rather corpse.

Overall, this crossover is super fun, and well worth a read for Cap fans and others. All but three issues are available on DC Universe (the tie-ins for “Justice League Europe,” “Animal Man,” and “The Demon”), and those three can be found elsewhere if you look carefully enough (note: I’m talking, of course, about looking at your local comic shop and/or convention!).

Next week: Every single other Captain Marvel appearance between “Crisis on Infinite Earths” and “Zero Hour!” 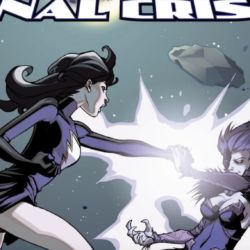 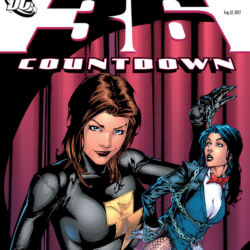 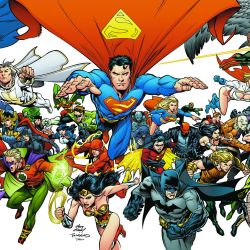