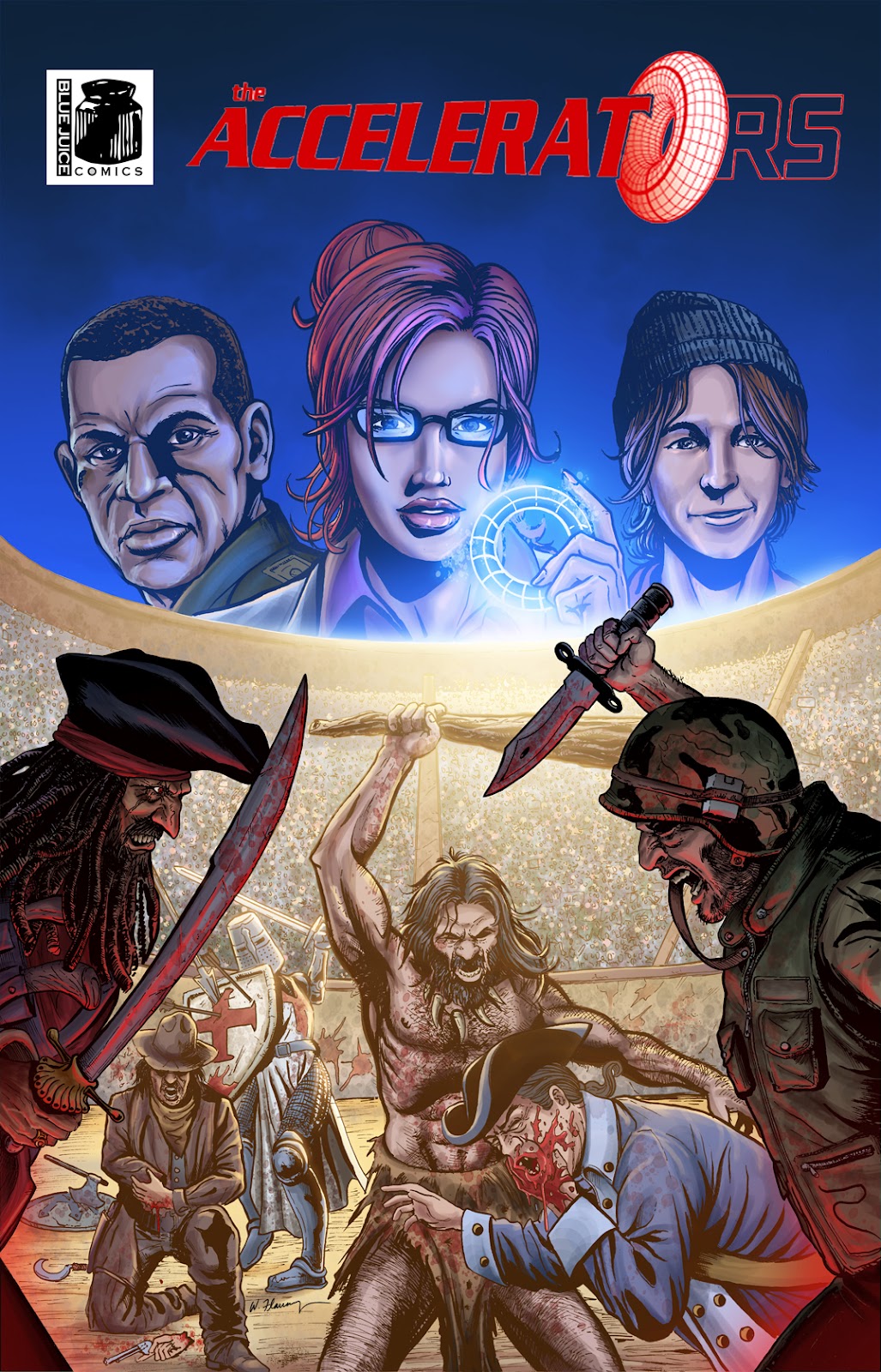 Earlier today, Blue Juice Comics received the Small Press Spotlight. As the flipside to that article, it’s time to focus on one of BJC’s titles that deserves your attention: Ronnie Porto and Gavin Smith’s “Accelerators” 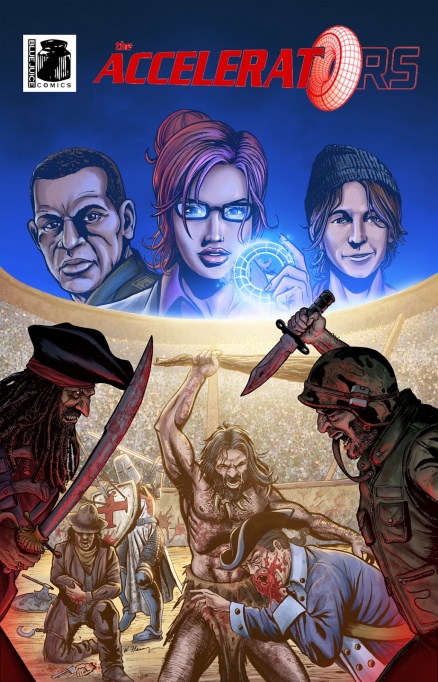 “Accelerators” was a long time coming. The story was originally a screenplay idea that Ronnie Porto submitted to the Blue Juice editors when they were looking to enter the comic business in early 2012. During the search for an artist, Porto was working behind the scenes on the production of Comic Book Men. Another guy involved mentioned an artist he knew from his days in a school rock band and gave Porto the artist’s phone number. After a two hour call discussing particulars in July, Gavin Smith was signed on as the penciler and inker. As an added bonus, Smith even brought along a colorist, Tim Yates. Because of how the comic came about, Porto and Blue Juice are co-owners of the property while Smith and Yates are work for hire.

The early plans for the series were very loose. No one was sure how well it would be received, so it was initially scheduled to be a five issue miniseries. Smith was contracted to draw two, and only one was guaranteed to be published. The issues were solicited as bi-monthly, which would give the company more time to judge its performance and adjust accordingly. Porto was able to talk his editor Tom Mumme up to six issues at an early stage. To give the book a little more shelf appeal, the first five covers were done by Walt Flanigan (“War of the Undead”, “Karney”). 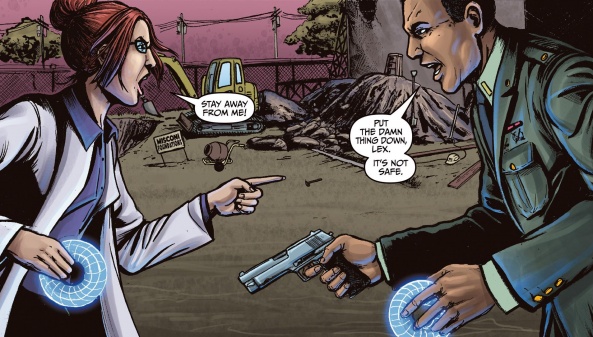 Alexis and Bertram may need some marital counseling

At its core, “Accelerators” is a time travel story with three main characters. Bertram and Alexa are a husband and wife couple from 1965. She’s a physicist working on a secret project, and he’s part of the military security detail assigned to protect the project. Things go haywire, as they tend to do in these situations, and they find themselves being pulled further and further into the future at an accelerating pace. During a stop in 1991, they accidentally pick up a teenager named Spatz. After one issue of set up, the group reach the story’s real setting: a not-too-distant distopia where the main source of entertainment is gladiator-style fights between groups of people pulled from various cultures and time periods. This set up allows for match-ups you never thought you’d see, such as a massive brawl between a Confederate soldier, a New York Yankee player, a safari hunter, a Nazi, and a ballerina, among others. As Spatz and Bertram find their way into and out of the arena, they learn more about the people behind the games.

Porto introduces you to the characters slowly as the story progresses instead of beating you over the head with awkward and/or lengthy expository text. All three carry some of the standard traits of their profession, but none of them are stereotypes. Each character receives their own voice and mannerisms, which also helps to sell their individual personalities. This makes for more engaging reading and makes the cast feel fully formed from page one. Even the extras who show up for one scene or one panel seem interesting enough to carry their own story.

The pace and plotting of the book is impeccable. Considering Porto’s previous writing credits were for screenplays, he’s adapted himself to the 22-page serial format very well. Every issue moves the story forward, subtle and not-so-subtle foreshadowing is placed at appropriate intervals, and the chapter breaks fit together very nicely. He also doesn’t waste time building up to reveals the reader sees coming. Instead of dragging out that kind of false tension, he drops the solution right in front of the cast and keeps the plot moving.

Porto’s scripts for the series are rather tight because he has some particular visions for how the scenes and settings should look, but Smith is left some wiggle room if he has a idea for something better. Accordingly, Smith gives Porto most of the credit for the storyline – he was brought into the fold rather late in the game, after all – but there are two elements to the story he does claim as his own. During the course of the story, Spatz befriends one of the generic henchmen who keep the games running smoothly. Smith lobbied for this ‘sidekick’, and was really happy when Porto wrote it in. Smith’s other idea? All the henchmen have thick mustaches. Those weren’t in the script. 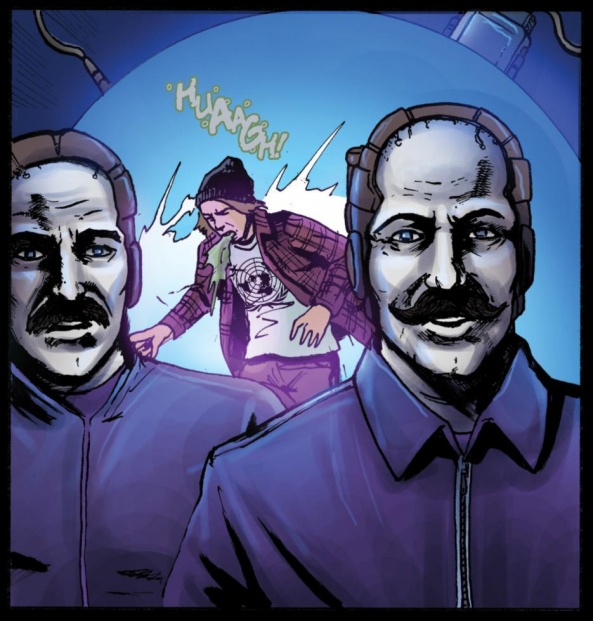 It makes sense in context

Smith’s art work keeps the story fun, even when the situations are serious or slower paced. His attention to background detail and character design makes every page a pleasure to examine. Most of the future’s population has augmented themselves with technology somehow, and no two are alike (other than the henchmen, who are all carbon copies of each other). Not even haircuts get repeated, which is staggeringly impressive considering the numerous crowd scenes.

Despite the amount of attention included in the background, there’s never a problem with it overtaking the foreground. Smith keeps his panels laid out in a way that focuses your eye exactly where he wants it, and the purpose and action of every panel is easy to discern. The characters are all given distinctive likeness and are easily recognizable. That’s an important feature in a time travel story that involves the same characters at different ages. When an panel shows a man who looks like an older version of a cast member, you won’t be wondering if the resemblance was intentional or imagined. 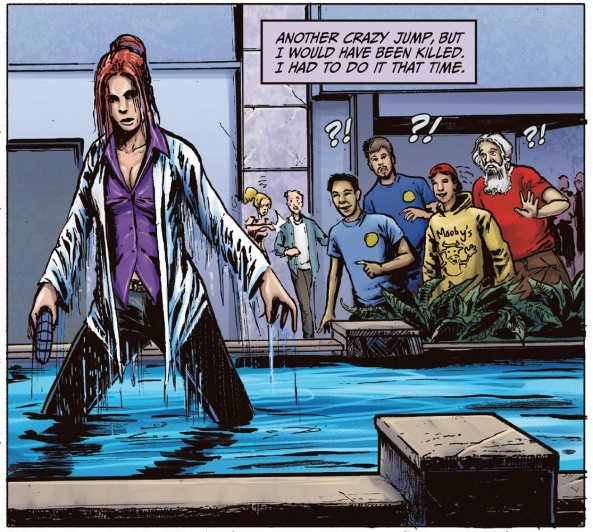 Dripping effect courtesy of White Out®

Every now and then, one of Smith’s images will stand out among the others. This is usually during a special effect, such as time travel, but it also shows up when the time travelers find themselves unexpectedly landing in a fountain. They take on a textured, rougher look than their ordinary appearance. Smith achieves this by using a technique involving whiteout. After he’s inked a page, he’ll smear some white out to create a scratched look. Even the darker parts of the ink are still a little grayer, leaving behind a singular effect that looks completely unique compared to the rest of the art.

The “Accelerators” future is a used one, where everything is dirty and repurposed. Thanks to Tim Yates’ bright colors, the filth and the grime actually looks somewhat inviting. Instead of creating dissonance, the palette turns the bleak setting into a place where the cast have fun, which fits perfectly with Smith’s style. Sure, the world’s gone downhill and their lives are in danger, but that doesn’t mean this has to be a depressing warning about the pitfalls of science or some other overplayed trope.

Overall, “Accelerators” is a very solid story. The time travel elements are well thought out and consistent, providing a stable backdrop for the plot to unfold against. The hard work put into the series from all corners is evident, and you should give it a look. If nothing else, remember the names of everyone involved. From the publisher to the colorist, this is the first professional comic work. If they can do this well on their first try, you won’t want to miss whatever comes next.

Six issues of the “Accelerators” have been released, and they’re still available in print from the Blue Juice store and digitally from Comixology. Those same issues have also been collected into a single trade volume, also available from those same links. The series is currently on hiatus while the team works on the next four issues. Porto has said he has enough ideas for the series to last a total of four or five volumes. Issue seven is due out in the spring, so keep your eyes peeled and pre-order it when the time comes. 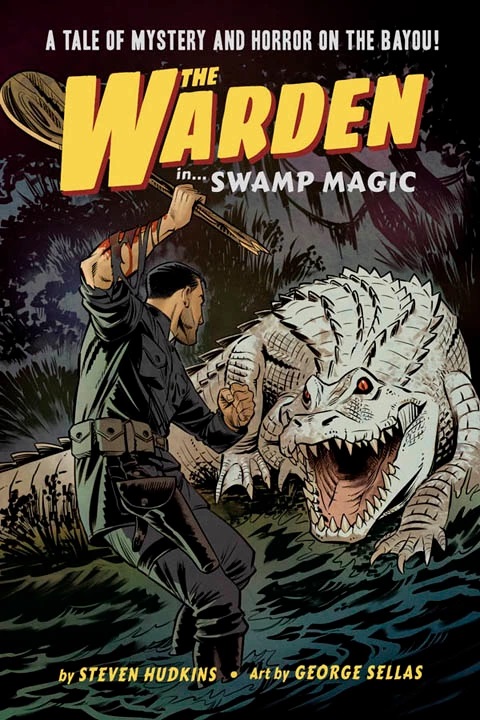 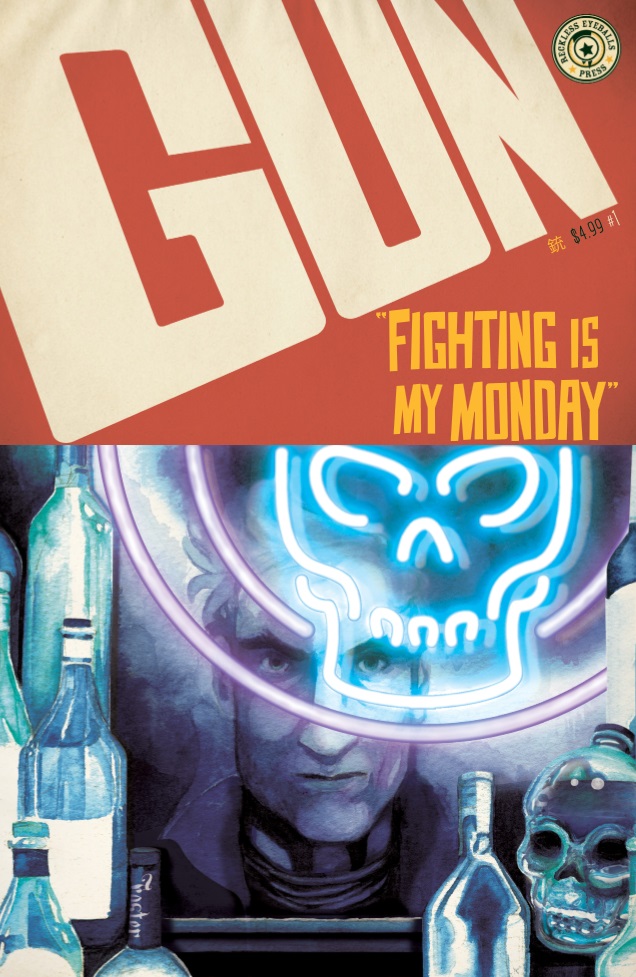