Banner courtesy of Mark Tweedale
Depending on your point of view, “Poet Anderson” is either a trail blazer or another installment of an ongoing trend. On one hand, it’s the first comic work by writer Tom DeLonge, the first original content published by Magnetic Press, and Magnetic’s first comic released in a monthly format. On the other, it’s another comic written by a musician, and it ties into a story already started elsewhere. However you choose to look at it, here’s all you really need to see: 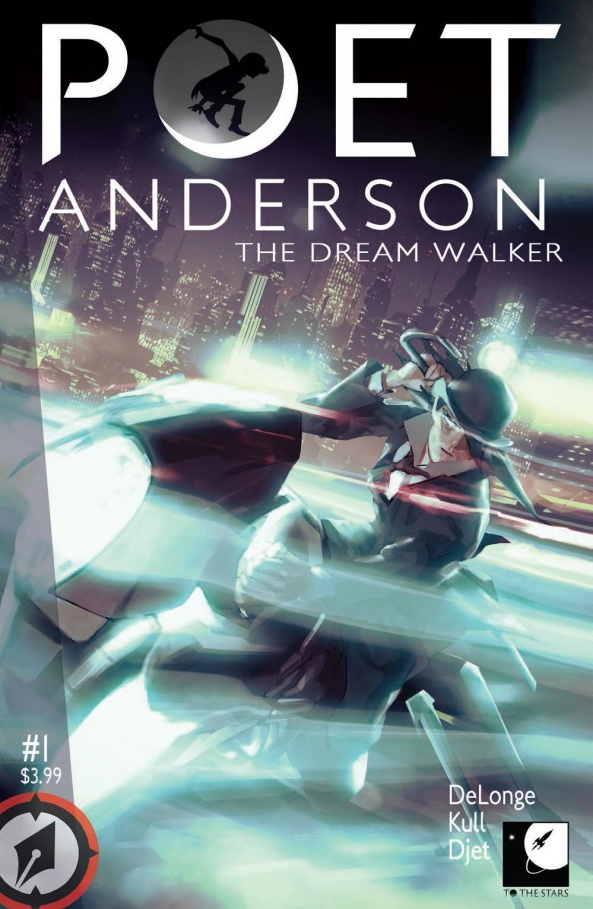 The core premise is actually pretty easy to explain. Jonas Anderson discovers he has the ability to dream lucidly; that is, he knows when he’s dreaming. This opens his eyes to the dreamworld, a type of parallel universe where everyone’s dreams take place. It’s a pretty cool place, so long as he avoids the predatory Night Terrors. Cue loads of fantastic elements, imaginative characters, and an endless canvas for adventure.

If “Poet Anderson” sounds familiar, it’s probably because you’ve heard someone talk about the short film released last November. The animated piece (watch it here) went on to garner critical acclaim and won the award for Best . This mini­series is written by two of the short’s four writers and acts a prequel to the short. It will be followed by another animated installment in the near future, this time feature length.

The story is from the mind of Tom DeLonge, best known for his membership in the bands Blink 182 and Angels & Airwaves. Fans of him may also know him for his films Riding in Vans with Boys, I Know What I Saw, and LOVE, and/or for his clothing and footwear lines. This resume should make it obvious even to a casual observer that DeLonge has a strong interest in exploring different media, so it was only natural for him to give comics and animation a shot as well.

DeLonge conceived the visual of the main character years ago, and the plot came together after he watched a documentary on dreams and REM sleep. With the help of three other writers, the idea was refined into the story seen in the short film. One of those writers, Ben Kull, joins DeLonge as co­writer for this miniseries. Kull describes his job as translating DeLonge’s voice and ideas into a narrative structure, and he’s the one who does the scriptwriting. The two bounce thoughts off of one another, and Kull has been the source of some of “Poet”‘s deeper mythology. Still, he wants it known that everything related to the project begins and ends with DeLonge.

It’s not unusual for a cross­media property to get weaker as it expands from its first, and usually ideal, medium. That’s not the case for “Poet Anderson”, which feels like it was never meant to be anything else. There are a lot of big ideas introduced here, and the fast pace will keep you turning the page to see where the story’s going. At the same time, the art has so many little details tucked into the background that you’ll want to read the issue twice just so you can take in everything you missed the first pass through. 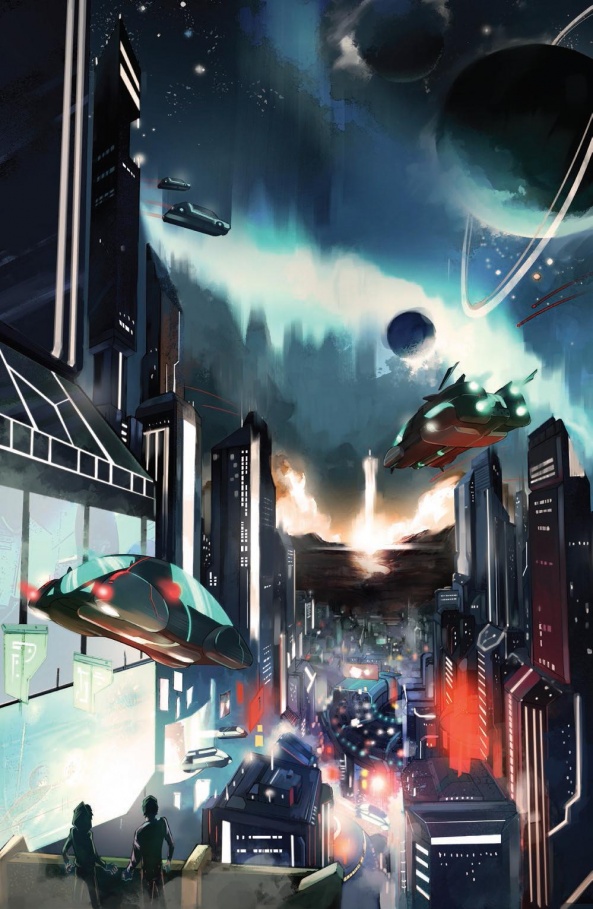 DeLonge and Kull introduce their high concepts by letting readers tag along as Jonas receives a guided tour of the dream world. It’s clear a lot of thought went into creating this setting, but they exercise great self control and explain the bare minimum. Most of it is laid down without commentary, and this “it is what it is” approach allows you to draw your conclusions about what you’re shown. Most importantly, here’s no prerequisite to watch the short. The comic does such a fine job of standing on its own that uninformed readers won’t realize they’ve missed anything.

The lead cast is made up of Jonas, his older brother Alan, and a girl they meet up with in Dreamworld named Ayo. Jonas obviously receives the bulk of the characterization as the star, and most of it is shown instead of told. This is no small mercy, because adding more exposition on top of the tour of Dreamworld would have been way too much for a first issue. Most of what we learn comes from Jonas’ interactions prior to dreaming, and the rest is filled in by him being a typical teenager. Alan and Ayo aren’t revealed quite as much ­ for now they’re being played as part of the mystery.

Another aspect of that mystery are the villains. The darker side of Dreamworld comes in (at least) two flavors: Night Terror and Night Stalker. The terrors are akin to wild beasts that just do what they do. The Stalkers are human­like, and they have a philosophy, ambition, and coordination that presents the true threat to Dreamworld and beyond. They’re only partly introduced in this issue, but their presence is powerful. The hints at their greater plan are reason enough to read more of this series.

All art duties for “Poet Anderson” are handled by Djet. He became connected to the project by a cold call offering him the job, and taking it has been a new challenge for him. The look and feel was already established by the animated film, and it’s a stark contrast to Djet’s typical style, which he describes as “light and sunshine.” He was tapped for the task in part because his previous work had similar elements of dream and fantasy that worked well with the existing designs. He also has previous credits in animation which helped him translate the story from motion to static images. 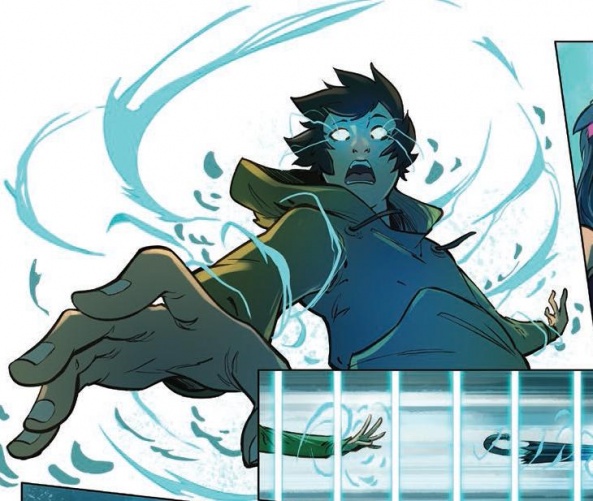 Of course, Djet’s static images aren’t really static at all ­ his manga style gives all the characters an innate sense of life. The exaggerated facial features enhance emotion and often reveal more about the characters than their dialogue. The action scenes are likewise amplified by excellent use of motion and speed lines. The real source of the dynamic look stems from the choice of perspective. Kull’s scripting gives Djet near total freedom when it comes to blocking and camera angles. The artist frequently uses that liberty to shift the horizon line above or below the eyeline,

which throws the panels into three point perspective. This trick works because Djet nails the proportions, like in the excerpt above. Sure, Jonas’ hand is large, but it doesn’t look unnaturally large. It looks right. Another area where Djet had control was the level of background detail. Toward the start of the issue, for example, there’s a scene with Alan being attacked by some Night Terrors. He wasn’t provided any information for the background, so he decided take advantage of the unreal setting to throw in some floating, glowing stones (see below). At the time, he wasn’t sure how the writers and publisher would react, but he says it actually went over pretty well.

This panel also provides an example of Djet’s lettering, which is just as dynamic as the rest of the artwork. The rougher shape of the balloon isn’t uncommon in manga work, but note the zags in the tail. Traditionally, a twist is added to the tail when there’s a long gap between the speaker and the balloon to prevent the tail from getting too thin or too thick at its ends. In “Poet Anderson”, the tails are always jumping. They never stray far, and certainly aren’t erratic enough to create any confusion. Instead, they provide one more element of motion and keep the story active, even when there isn’t much action.

“Poet Anderson” #1 is an all­-around solid comic, fully worth the price of admission. If your pull list needs some spice, or if you’re looking for something different, this comic will not disappoint.

It may not be the absolute beginning of the “Poet Universe”, but it’s still the start of something exciting. The next issue promises more intrigue and adventure, and Djet says his artwork will show improvement and maturity. Look for it in your local comic shop now, or buy direct.