Today marks the final week of preamble, as we start in with “JSA” next week. But first, James Robinson, David Goyer, and co bring us on a trip through the past that will, in a very strange way, set the stage for “JSA” with “The Justice Society Returns!” 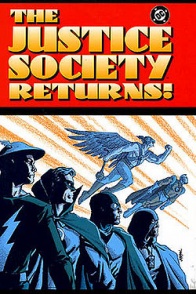 The superheroes that make up the Justice Society of America take on the disciples of a mad god named Stalker, who is out to eliminate war by ending life itself.

For those who have been reading this column all year, you’ve gathered that writers love setting JSA stories in the past, and we’ve seen a bunch of them now. This one is, hands down, the most effective one. In part, it is because it involves the largest cast. We get breakout issues featuring characters we’ve seen very little of, as well as some fun team ups that work incredibly well together. Also of note, this series starts to bring small bits of James Robinson’s “The Golden Age” into the standard continuity in some interesting ways.

The story itself is structured, according to the preface, the way many old Justice Society stories would be laid out: the team encounters a threat, then must pair up to take on various parts, before regrouping at the end. So, each JSAer gets paired with another, and we get fun adventures with characters that sometimes have a clear connection, and other times have a bit more of an amorphous one.

The other part of this process that is a big improvement is just how well it is mapped out. Most of the issues focusing on the various pairings are written by the current writer of an ongoing that either features that character, or features a ‘new’ version of that character. Ron Marz is writing “Green Lantern,” so he takes the Alan Scott/Johnny Thunder issue. James Robinson is writing “Starman,” so he takes the Ted Knight/Atom story. Mark Waid is writing “The Flash,” so he pens the Jay Garrick/Mister Terrific book. Tom Peyer is about to launch “Hourman,” so he writes the Hourman/Dr. Mid-Nite story. You get the idea.

The highlight of these stories, to me, was “Adventure Comics” #1, featuring Starman and the Atom. It certainly doesn’t hurt that the “Starman” creative team of Robinson, David Goyer, and Peter Snjebjerg are on the title together, but there’s more at play than just that. This story does two things very well: it shows us Al Pratt (the Atom) as a hero always feeling less than the ‘big guns’ of the JSA, and it shows us Ted Knight’s moment of clarity when it comes to war and the war effort. Snejbjerg does such a fantastic job showing Knight’s unfolding realizations of his culpability in the development of the atom bomb. The scene has stuck with me for years since I originally read it, and it was even more devastating on this most recent re-read.

Some of the stories are nearly as impressive, with the Waid-penned “National Comics” #1, with art by Aaron Lopresti, being the second most effective, and also one that digs into some thornier questions. Mister Terrific, aka Terry Sloane, goes apoplectic when he realizes that the Allies are bombing Dresden for no tactical reason. Sloane’s rage is palpable and understandable in those scenes, and it, too, makes for a memorable and difficult read.

Overall, the story is pretty standard Golden Age stuff, but the event manages to do a couple of really important things and, in a way, sets the stage for the DC Universe that we are still inhabiting.

First of all, this collection features “Star-Spangled Comics” #1, the precursor to “Stars and S.T.R.I.P.E.,” which would be launched just a few months later by Geoff Johns. “Star-Spangled Comics’ #1 is the first writing credit Johns gets at DC, and less than a year later, he’d be taking over “JSA” from Robinson and Goyer. Again, in another example of planning, Johns was able to get his feet wet with this issue before launching a new series just a few months later.

But most importantly, this series was the first real attempt to make the JSA more than the characters from the past that older folks remembered. Spinning out of this event were multiple titles – “Stars and S.T.R.I.P.E.,” “Hourman,” and “JSA” – that tied those classic characters into modern times, and allowed the characters to be integrated into the DC Universe in very real ways. Even when the New 52 hit, and those characters went away, fans were quite angry. Ever since this series spun off “JSA” – and with a tip of the cap to “Starman,” as well as Alan Scott and Jay Garrick being important parts of “The Flash” and “Green Lantern” – the characters have been important pieces on the DC chessboard.

This is where the dream of legacy on one Earth, not multiple ones, really came to pass. It is here that the last strands of “Crisis on Infinite Earths” mixed with “Zero Hour” and some (at the time) young, fresh talent, to create a solidified version of DC’s historical hierarchy. It would only get better from here.