Welcome back, manga fans! While the COVID-19 pandemic may be disrupting the single-issue comic market, manga publishers seem to be forging ahead. Let’s see what’s in store for us in the future! 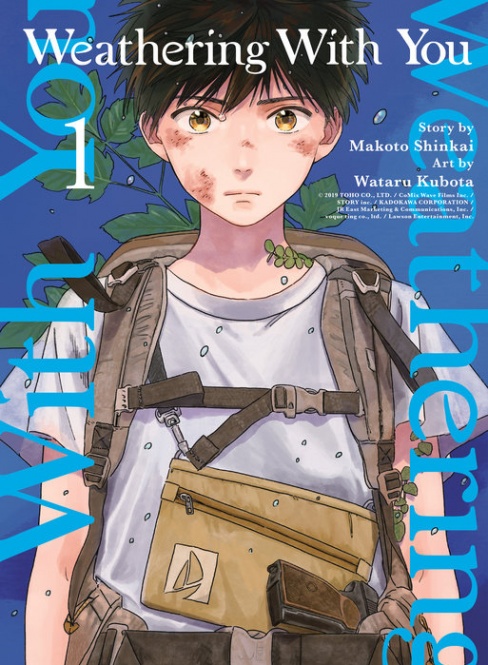 I think it’s safe to say that Makoto Shinkai is the “hottest” current anime director, right? Your Name was a worldwide phenomenon and boasted some of the best animation and background designs that I’ve ever seen. Weathering with You was equally as bombastic and only slightly less successful, so it was only a matter of time before it got a manga adaptation. I’m not a huge fan of Shinkai’s writing — he often loses me in the melodrama and the insane plot mechanics — but I’m sure this book will appeal to his fans.

Weathering with You, volume 1
Written by Makoto Shinkai
Illustrated by Wataru Kubota
Published by Vertical Comics
“Your Name” Director Makoto Shinkai’s latest movie “WEATHERING WITH YOU” will get a complete manga version with beautiful art and delicate depictions by the up-and-coming artist Wataru Kubota!!
The summer of freshman year of high school. A boy named Hodaka runs away from his island home and goes to Tokyo, where he spends every day in loneness. Then, in a corner of the bustling city he meets a girl named Hina. But he soon finds out that she possesses a mysterious power.
Up-and-coming artist and Afternoon Four Seasons Award winner Wataru Kubota is set to illustrate the complete manga version of the latest film by Director Makoto Shinkai, who received international acclaim for “Your Name”!! 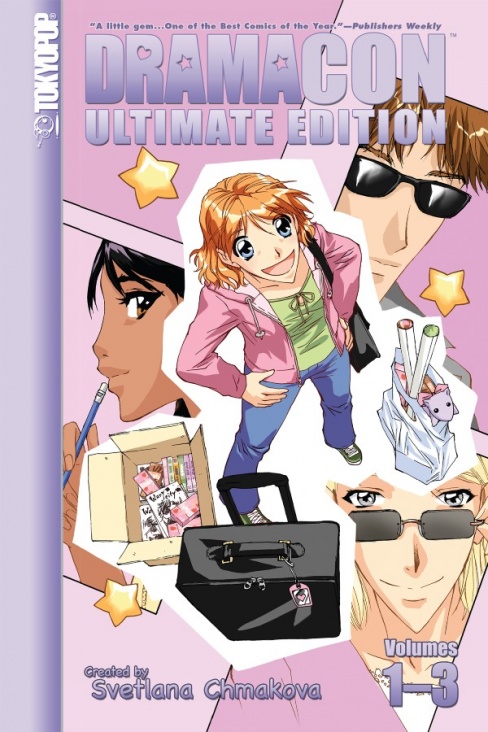 Note: This cover from a previous release of the same material.

I’ve often heard the name Svetlana Chmakova in discussions about comics aimed at young girls, and I had no idea she got her start as an English-language manga creator for Tokyopop during the mid-aughts manga boom. Now that Tokyopop is back in business, it makes sense that they’d reprint her first smash hit, “Dramacon,” about creators at an anime convention.

Dramacon: 15th Anniversary Omnibus
Written and Illustrated by Svetlana Chmakova
Published by Tokyopop
Relive Christie’s three-year adventure at the Yatta Anime Convention with this 15th-anniversary edition of Svetlana Chmakova’s debut series: Dramacon. All three volumes are compacted into one pocket-sized edition. Vol 1 Summary: When amateur writer Christie settles in the artist alley of her first-ever anime convention, she sees it as an opportunity to promote the manga she had started with her artist boyfriend. But when she unexpectedly falls for a mysterious cosplayer, things become complicated. What do you do when you love someone who is going miles away from you in just a couple of days?! Web-comic vet Svetlana Chmakova gives us a funny, romantic, behind-the-scenes look at an anime convention-where sometimes even two is a crowd! Vol 2 Summary: It’s Christie’s second year at the Lakeside Anime Convention and the drama picks up right where it left off in Dramacon volume one! With her new partner-in-crime, a.k.a. artiste extraordinaire Bethany, she is promoting her latest comic. Matt is also back, but to Christie’s shock, he now has a girlfriend! Vol 3 summary: College students Christie and Bethany are back to pimp their comic at the LAC, this time to a delightfully large crowd of loyal fans who read it online. Bethany’s glowing with pride since her mascot art won the contest and is now on every t-shirt and program at the con. They are the stars this year! 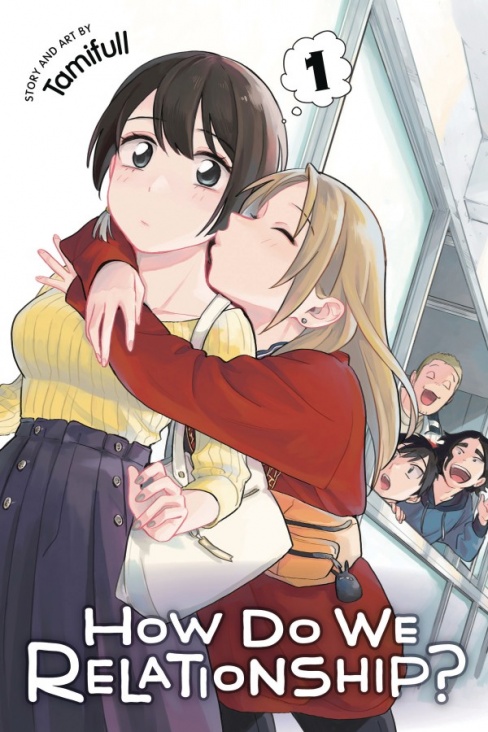 As LGBT YA books have become more and more prominent, American manga publishers have been translating more and more manga titles in that category. Viz has translated a few gay romances recently, but this has to be one of the first lesbian romances I’ve seen from them. Seeing as they’re the biggest manga publisher in the States, that’s a great thing.

How Do We Relationship? volume 1
Written and Illustrated by Tamifull
Published by Viz Media
Shy Miwa has always dreamed of finding love, but living in small-town Japan made finding the right match difficult-especially since she likes girls! Even going away to college didn’t seem to increase her romantic odds until one day her outgoing classmate Saeko suggests they might as well start dating each other since it’s not like either of them have other options. But when their casual friendship starts to become something more Miwa begins to wonder- can a pragmatic proposal lead to true love? 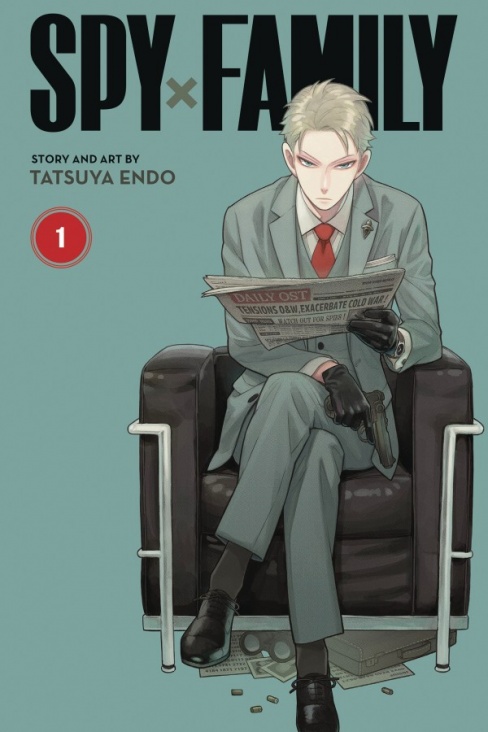 “Spy x Family” has been serialized in Shonen Jump since last year, and in that time it’s quietly risen to the top 50 manga series on My Anime List. Which is funny, because I haven’t heard any mainstream chatter about it. If the hype is to be believed, the print release will probably help this series catapult in popularity in America. Let’s see!

Spy x Family, volume 1
Written and Illustrated by Tatsuya Endo
Published by Viz Media
Master spy Twilight is the best at what he does when it comes to going undercover on dangerous missions in the name of a better world. But when he receives the ultimate impossible assignment-get married and have a kid-he may finally be in over his head! 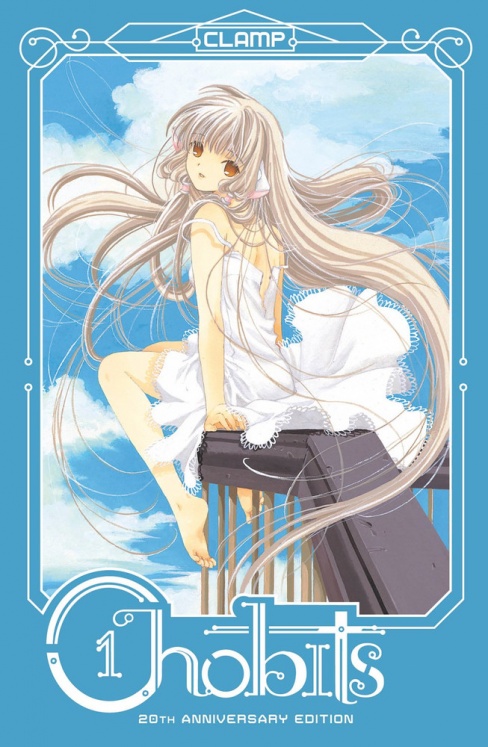 Every month or two, Kodansha has been announcing new anniversary editions of CLAMP’s works. I’ve still yet to check any of them out, and it’s great to know I have a lot of options to choose from!

Chobits 20th Anniversary Edition, volume 1 HC
Written and Illustrated by CLAMP
Published by Kodansha Comics
If you’ve never experienced this unique, cute sci-fi romance about what it means to be human, now’s your chance! One of the biggest hits from CLAMP, creators of xxxHOLiC and Magic Knight Rayearth, returns in a definitive, hardcover premium collector’s edition, featuring a large size, premium paper, color pages, and more.

After moving from the countryside into the big city, poor college student Hideki Motosuwa finds himself down on his luck. All he wants is a good job, a girlfriend, and his very own “persocom” – the latest and greatest in humanoid computer technology. Hideki’s luck changes one night when he finds Chi – an adorable, but seemingly broken, persocom thrown out in a pile of trash. After taking her home, Hideki discovers that Chi is more responsibility than he expected – and that there’s much more to his cute new persocom than meets the eye. 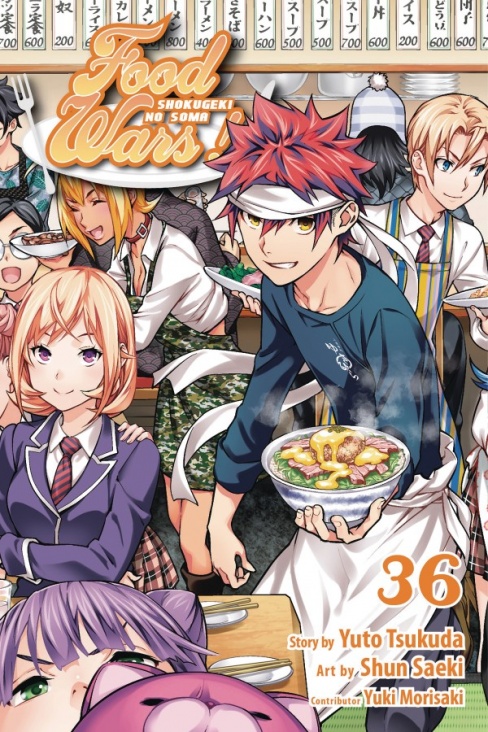 Viz is the publisher with all the shonen action series with a ton of volumes: “Dragonball,” “Naruto,” “Bleach,” “One Piece,” “Case Closed,” and I’m sure “My Hero Academia” will be joining that club soon. These series always seem invincible during publication, so it’s always an event when one of them ends. Let’s pour one out for “Food Wars.”

Food Wars: Shokugeki no Soma, volume 36
Written by Yuto Tsukuda
Illustrated by Shun Saeki
Published by Viz Media
The world-renowned gourmet tournament the Blue reaches its climax. Soma clashes with noir chef Asahi in a battle to create the one thing Book Master Mana wants most-a dish the world has never seen! But will this battle do anything to mend Mana and Erina’s strained mother-daughter relationship? The revolutionary food battle manga comes to a thundering conclusion! 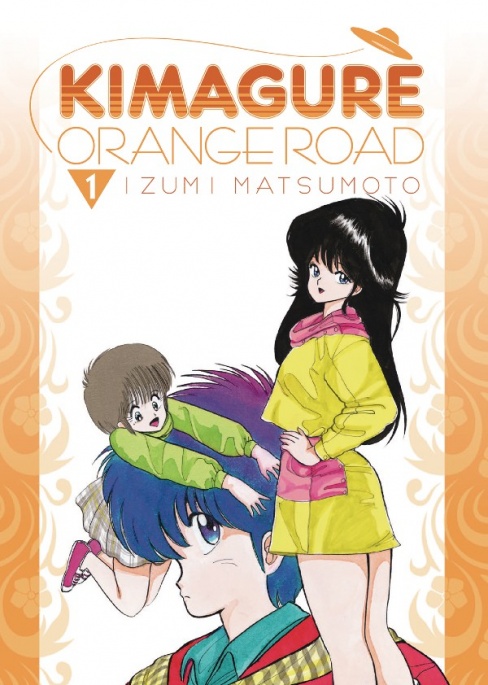 As with “Wonder 3” last month, this month sees another Kickstarted book from Digital Manga Distribution make its way to the Direct Market. I’m always down for rarities and giving lesser-known books a chance, and this old-school slice-of-life style with light fantasy elements seems just my speed.

Kimagure Orange Road Omnibus, volume 1
Written and Illustrated by Izumi Matsumoto
Published by Digital Manga Distribution
Secretly-psychic Kyosuke has just settled into a bustling school filled with brand-new faces, but he wastes no time making waves! With both the shy and mysterious Madoka and the high-energy Hikaru spinning in and out of his life, Kyosuke’s dizzy with the first sweet rush of female attention! But will his instincts lead him into the arms (and heart) of the right girl? 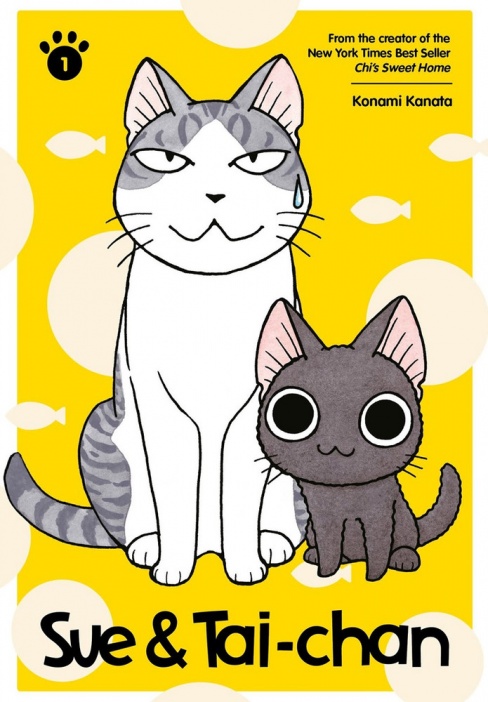 The obligatory cat manga for the month comes with a twist: it’s in full color! Kanata previously found success with the similarly-designed cat manga “Chi’s Sweet Home,” so fans of that series should look forward to this one.

Sue is an aging housecat who’s looking forward to living out her life in peace…but her plans change when the mischievous black tomcat Tai-chan enters the picture! Hey! Sue never signed up to be a catsitter! Sue and Tai-chan is the latest from the reigning meow-narch of cute kitty comics, Konami Kanata. 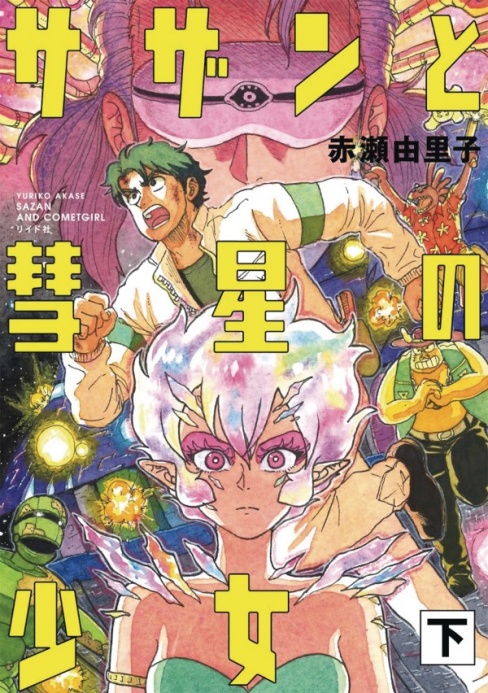 Another full-color manga, and what beautiful colors they are. While this story sounds fun and zany in the best way, I can’t get over the colors on the cover. I might pick this one up for that alone.

Sazan & Comet Girl Omnibus
Written and Illustrated by Yuriko Akase
Published by Seven Seas Entertainment
A critically acclaimed, full-color manga adventure through the boundless reaches of outer space! Sazan, a young man from Earth, works on other planets and has seen his share of galactic oddities. But when he meets Mina, a red-headed girl who zooms into his life on a space scooter, he knows he’s run into someone special. Mina contains shocking power within her body, a power that attracts armed thieves who hope to steal it from her. Mina zooms out of Sazan’s life almost as quickly as she arrived, but Sazan is determine to find her again… no matter how far he has to chase her across the galaxy. 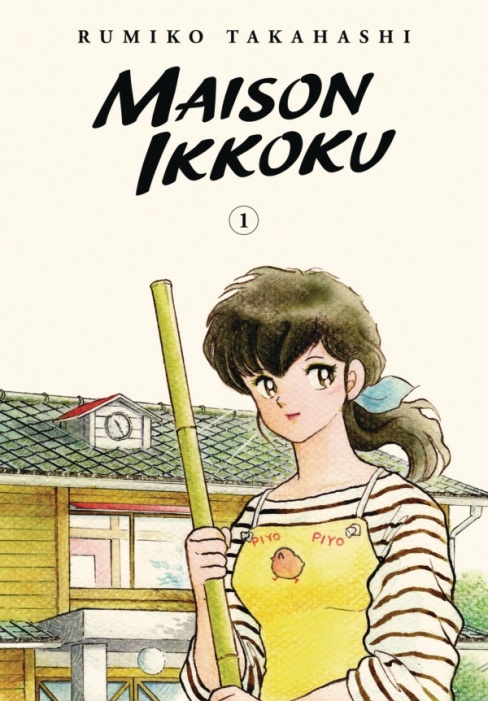 Viz has been pretty good about keeping Rumiko Takahashi’s works in print. She has been one of the biggest influences in the Japanese and American manga markets, making her not only the best-selling female comics artist in history, but also one of the few mangaka inducted into the Eisner Hall of Fame — and the only female mangaka — as well as an inductee into the Science Fiction and Fantasy Hall of Fame, plus a recipient of the lifetime achievement award at the Angouleme festival. Now that Viz has been reprinting her first series, “Urusei Yatsura,” it’s time for nice reprints of her second series, and the one I’ve most wanted to read: “Maison Ikkoku.”

Maison Ikkoku Collector’s Edition, volume 1
Written and Illustrated by Rumiko Takahashi
Published by Viz Media
Yusaku Godai didn’t get accepted into college on the first try, so he’s studying to retake the entrance exams. But living in a dilapidated building full of eccentric and noisy tenants is making it hard for him to achieve his goals. Now that a beautiful woman has moved in to become the new resident manager, Godai is driven to distraction!

Anything I missed? What are YOU looking forward to? Let me know in the comments, and stay safe, everyone!