It seems every month there’s a new slew of #1 issues coming out from Marvel that take up half the top ten list. Writers and artists at the top of their games or new and exciting entries to the comic world are bringing in new visions and new takes on classic characters, and September is no different. So let’s see what the month will hold for us 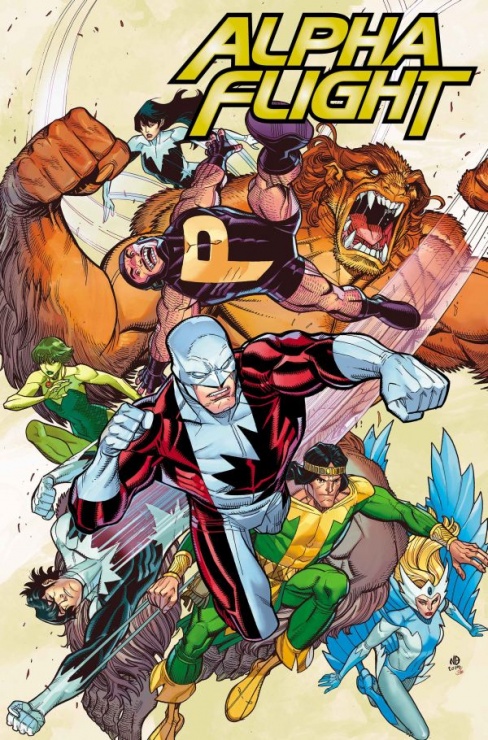 There’s quite a few comics Jim Zub is writing for on the list this month, so let’s start with the return of Canada’s premiere super team: Alpha Flight! Throughout its many ups, downs, and iterations, Alpha Flight has maintained a moderate but devoted base of fans and a surprisingly consistent team. So what to Jim, Jed, and Ed have planned for the team? It will be fun to find out.

• STRONG AND FREE!
• Grab your hat and come travel light… adventure lies just around the bend! Three brand-new tales no one has ever told…until now! Join the greatest creators the Great White North has to offer as we unearth the secret history of the classic Alpha Flight stalwarts: Puck! Snowbird! Talisman! Northstar! Marrina! Guardian! Vindicator!
• 40 PGS./ one-shot/Rated T+ …$4.99 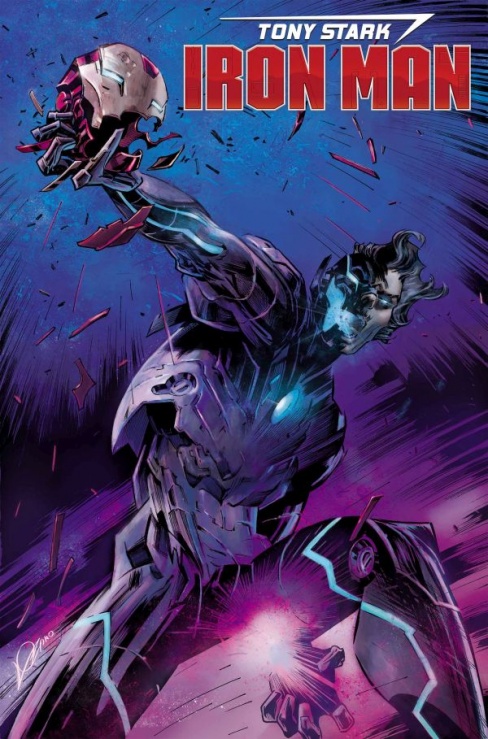 It’s man versus machine… man. Yes, a new “Tony Stark: Iron Man” arc begins, with Ultron and his robot uprising. Yes, another one of those. What makes this one different? For starters: Machine Man, if just to give him another excuse to shout “Death to fleshy ones!” More importantly, A.I. rights has been a big part of the “Tony Stark: Iron Man” comics, so this arc may build on that in new and exciting ways.

• “THE ULTRON AGENDA” STARTS HERE!
• Watch out, Iron Man! The Robot Uprising of the Marvel Universe has begun! But it’s NOT Ultron leading the charge… it’s Machine Man?! The A.I.’s are on the attack – and they might be in the right. Battle lines are being drawn, and it’s time for Tony Stark, Jocasta, Andy Bhang and the rest of the cast to pick sides.
• 32 PGS./Rated T+ …$3.99 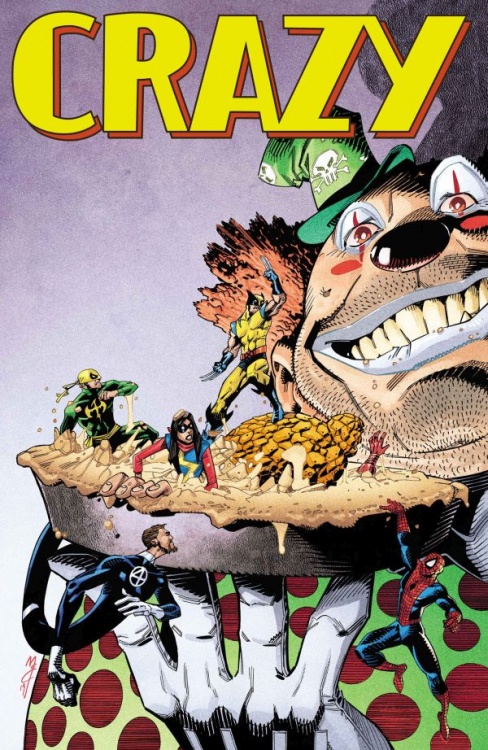 Honestly… I’m not sure what to expect from this. But I expect it to be entirely madcap and more than a bit bizarre. It was such an unexpected addition to the upcoming comics that how could I not include it on this list? One look at the solicit and I am ready for the madness that awaits.

• MARVEL’S GREATEST…ER…MOST DEMENTED COMIC MAGAZINE
• OBNOXIO THE CLOWN is back and so is one of MARVEL’S most hilarious titles thanks to a momentary lapse in sanity on the part of a few over-worked editors and a gang of writers and artists ready to take advantage of it. No super hero is safe! No comic book event is sacred! Will the Marvel Universe ever be the same? Will we want it to?
• 40 PGS./One-Shot/Rated T …$4.99

7. Doom Comes For the Squirrels 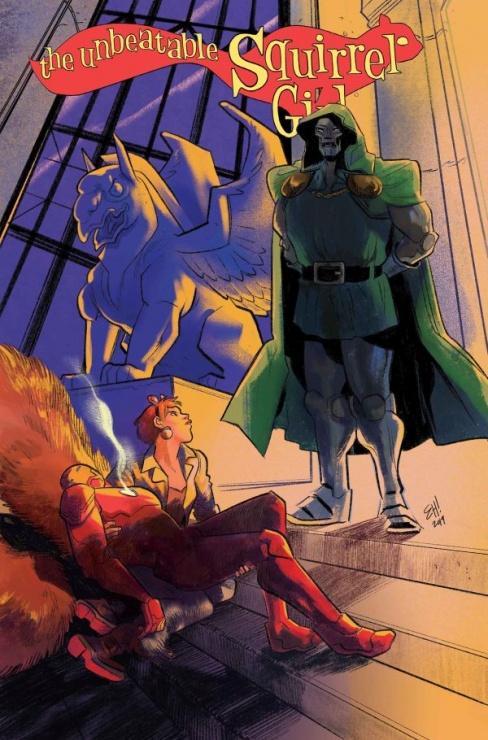 In Squirrel Girl’s first appearance, she defeated Doctor Doom. This is canon, and other writers have acknowledged it as such. So will Doom get his revenge? Hard to say, but it looks like a more recent Squirrel Girl foe will be teaming up with him, so I’m going to enjoy this as much as I can while repressing the knowledge that only two issues remain after it.

• With Melissa doing everything she can to destroy Squirrel Girl, is there anything Doreen can do to survive??
• Gosh, I sure hope so because it’d be nice if we actually make it to #50 BUT TECHNICALLY YOU NEVER KNOW!!
• Especially when Squirrel Girl’s first villain, DOCTOR DOOM, is involved…
• I don’t want to say more because SPOILERS, but trust us when we say this is a bonkers issue in which bonkers things happen, and you should definitely order it right now!!
• 32 PGS./Rated T+ …$3.99 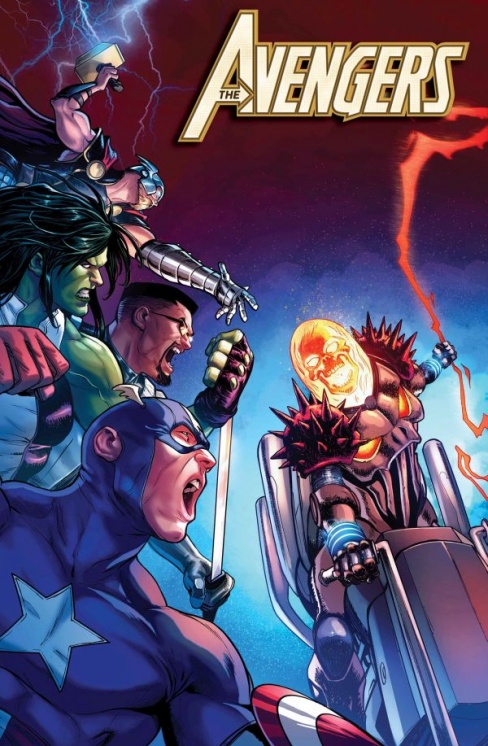 Cosmic Ghost Rider has been the oddest but most interesting character to join the Marvel canon as of late. It was one thing when he was in a what-if future where Thanos won, but thanks to time travel and other shenanigans (ie. the writers and fans liked him enough to keep him) he’s part of the main universe now. First he was messing around in “Guardians of the Galaxy,” now he’s teaming up with the Johnny Blaze Ghost Rider in hell… to fight the Avengers.

There is nothing about that sentence that I don’t like.

• THE CHALLENGE OF THE GHOST RIDERS!
• If the Avengers thought one Ghost Rider was tough to deal with, wait’ll they see how many Spirits of Vengeance have just been unleashed by the King of Hell, Johnny Blaze! Including the craziest, most powerful Rider of them all…That’s right, it’s the Avengers vs. Cosmic Ghost Rider!
• 32 PGS./Rated T+ …$3.99 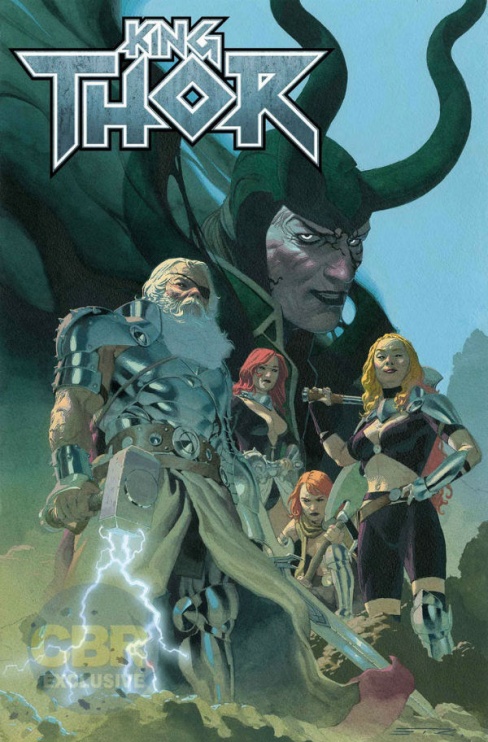 Early in Jason Aaron’s “Thor,” we were shown a far-off future with Thor as an older, crankier All-Father. The comics have been jumping to and from that timeline, showing us the post-universe-ended Earth, Phoenix Wolverine, Doom’s final form, and Loki pissing the hell out of an undead Ego. Yeah, it’s pretty wild. So now that story comes to an end, and it all begins with this. Whatever Jason Aaron has in mind, he’s been planning it for a long while, and whatever it may be, it’s sure to be awesome.

• SUPERSTARS JASON AARON & ESAD RIBIC CONCLUDE THEIR EPIC THOR STORY!
• The creators of the legendary THOR: GOD OF THUNDER series that kicked off one of the most epic runs in Marvel history are back together for one last ride with the almighty Lord of Asgard! Seven years ago, Jason and Esad introduced the Thor of the far future, All-Father of a broken realm and a dying universe, as he stood in battle against the Butcher of Gods, wielder of All-Black the Necrosword. Now that nefarious blade has returned, in the hands of Thor’s all-time greatest enemy –  his brother, Loki –  for one final, cataclysmic showdown. Behold the book no comics fan should miss –  the celebration of the end of a truly Marvelous era.
• 32 PGS./Rated T+ …$3.99 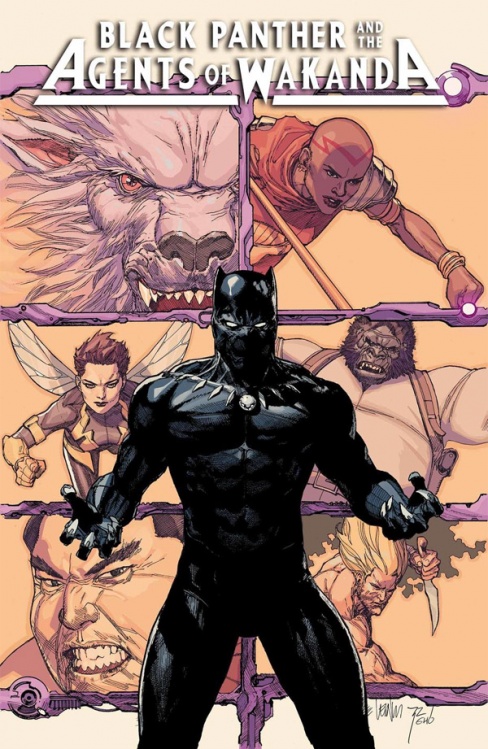 Speaking of Jason Aaron, one awesome thing he introduced in his “Avengers” comic is Black Panther’s Agents of Wakanda. So now let’s bring it back to Jim Zub, who’s taking that team for a new spin in a solo run. It’s a team featuring a mix of old favorites and under-appreciated gems, exploring one of the most unique settings in Marvel.

One question remains, though: where’s Broo?

• WAKANDA WORLDWIDE!
• ALL-NEW ONGOING SERIES!
• From the pages of Jason Aaron’s AVENGERS! Vampires. Aliens. Angry fish kings. Black Panther’s hand-picked Agents of Wakanda can handle it all. And who better to lead them than the king of the world’s most technologically evolved country? Wakanda is making waves on the world’s map – and not everyone’s a fan. With General Okoye’s help, T’Challa will take Gorilla-Man, Ka-Zar and Wasp on a global fight for survival – to handle threats S.H.I.E.L.D. could only dream of!
• 32 PGS./Rated T …$3.99 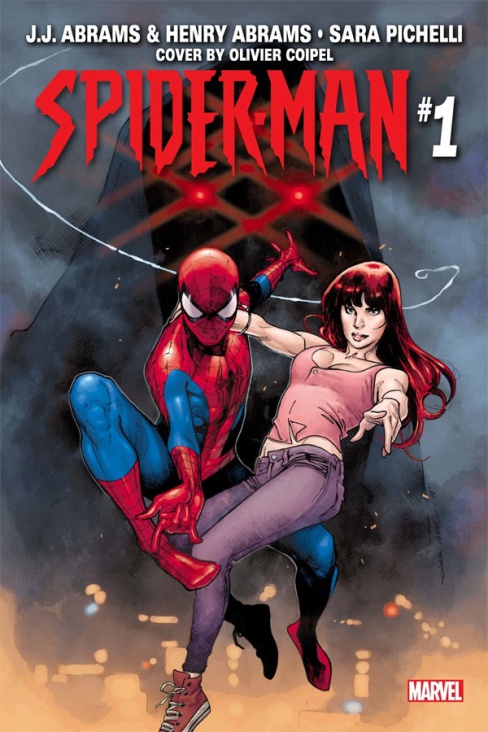 J.J. Abrams himself, writing a Spider-Man comic along with his son.

I really could just leave the solicit at that. I know this announcement caused a bit of a stir, but J.J. has shown his skill at crafting stories for cinema time and time again, what’s not to like about him writing a Spider-Man comic? Toss in a new antagonist for this story and I’m very excited to see what they have planned for our favorite web-slinger.

• WHO IS CADAVEROUS?!
• The most shocking and incredible comic of 2019 is here as J.J. ABRAMS (STAR WARS, STAR TREK, SUPER 8) and his son HENRY ABRAMS are joined by superstar artist SARA PICHELLI (MILES MORALES, GUARDIANS OF THE GALAXY) team up for SPIDER-MAN! What do they have planned for Peter Parker and Mary Jane Watson?! Who is Cadaverous?! The Modern Master of Mystery Makes His Marvel this September!
• 40 PGS./Rated T …$4.99 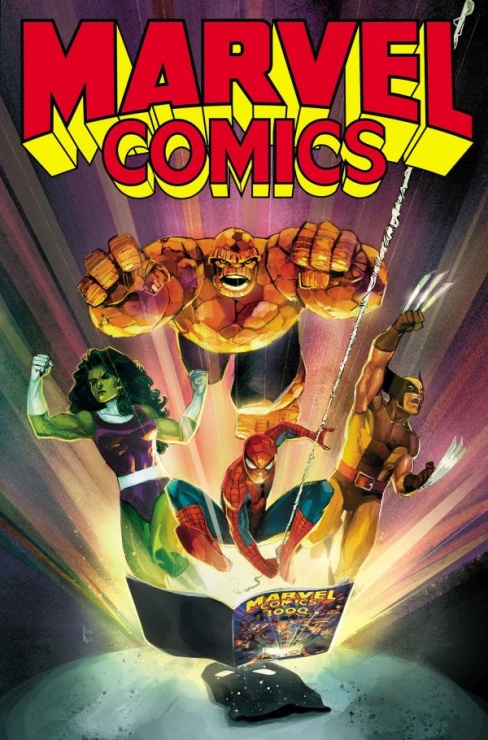 Did you think Marvel #1000 alone was going to be enough for everything? Oh no, there’s another issue. Marvel #1001 continues the story with more creators, more stories, and more secrets. So if #1000 deserved a place on this list, #1001 does too for carrying on what Marvel promises will be a very big story.

Marvel Comics #1001
Written by everyone
Illustrated by everyone
Cover by Rod Reis
Variant covers by Mr. Garcin, Pat Gleason, and Mike Deodato

• THE BIGGEST STORY IN MARVEL HISTORY CONTINUES!
• WHO IS THE MYSTERIOUS NEW CHARACTER FROM MARVEL’S PAST?
• It was a story too large for any one issue, with too many classic Marvel creators who wanted to be a part of the fun! And so the party continues on with this additional celebratory issue, featuring additional secrets and revelations about the Eternity Mask and the person who now wears it!
• 40 PGS./Rated T+ …$4.99 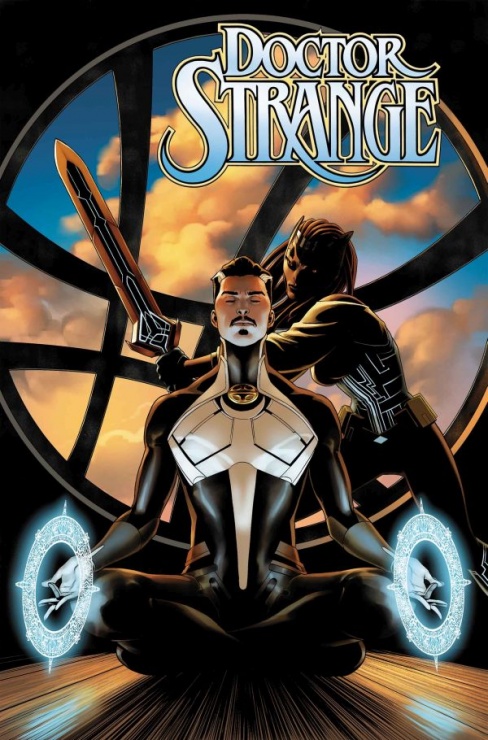 Doctor Strange has gone through a lot lately. His time as Sorcerer Supreme has been on and off, he’s been to space, made new friends, forged his own weapons, brought Hell to earth… it’s been a busy 40 issues. So it all ends here, at least until the next “Doctor Strange” ongoing gets greenlit. So a big thanks to Mark Waid and everyone in the creative team that made this happen – I look forward to seeing how this ends and where it goes next.

But we’d better get more of Bats after this. He is a good dog.

• An event so epic shakes Doctor Strange to the core and makes him completely reevaluate his life and role.
• This event is so huge that it makes this the LAST ISSUE OF DOCTOR STRANGE!
• 32 PGS./Rated T+ …$3.99