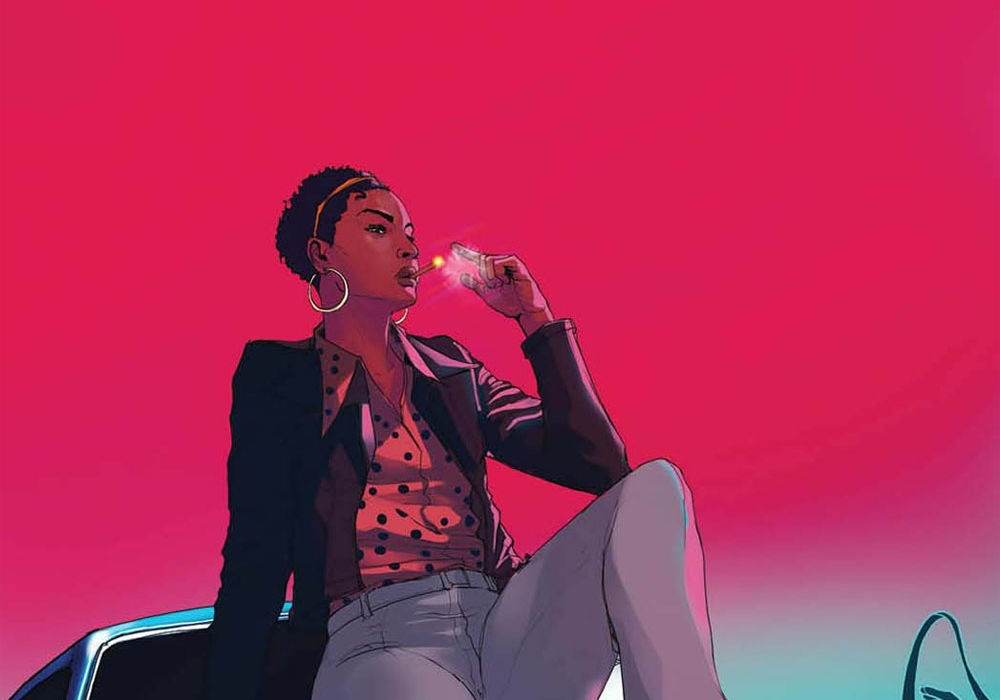 It’s difficult to think that 2021 will actually exist. I guess even if we were in the middle of an apocalypse, Diamond would still go forward with their current lineup. We’ve already seen what’s coming up from DC, Marvel, Image, and manga publishers, so here’s some of the books coming out this January 2021 from independent, alternative, underground, and major publishing houses. 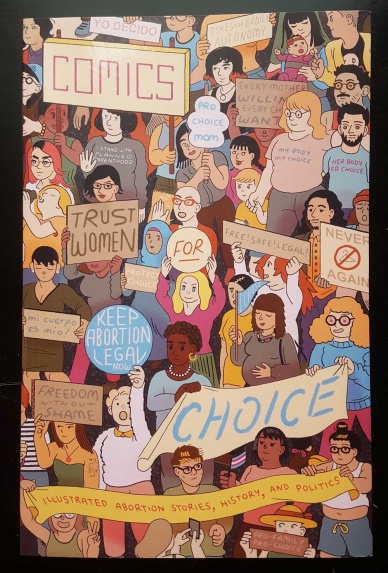 Zealots like to hide their desire to possess and control women’s bodies through the lens of “pro-life” rhetoric. Even though the conservative party in almost every country is a death cult bent on sacrificing the common people in order to exert and maintain their power. This award-winning anthology from Silver Sprocket, expanded and re-released, features women exploring their own histories, running down the current political climate when it comes to abortion rights, and how the Republican party will do whatever it can to strip women of these rights. One of the most important things we can ever do is listen to the people who may or may not have to undergo this procedure, and respect whatever choice they make for their well-being, whether it’s mental or physical. Especially right now, especially when one of the least-qualified and most backward people just got themselves a seat on the highest court. The least we can do is listen to these women’s stories.

Cartoonists and illustrators have teamed up with activists, historians, and reproductive justice experts to create comics about their diverse personal stories, the history of abortion, the current politics, and more. As this fundamental reproductive right continues to be stigmatized and jeopardized, over sixty artists and writers have created comics that boldly share their own experiences and educate readers. The anthology has been honored with the Ignatz Award for Outstanding Anthology and Eisner Award nominated.

9. When It Comes Time to Storm the Bastille 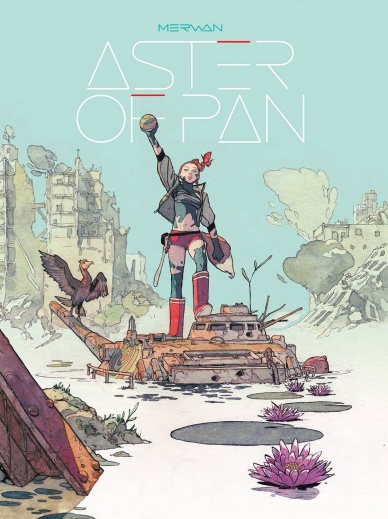 Bring on the Revolution. You would think a French artist would have some inherent familiarity when it comes to tearing down oppressive systems.

Aster of Pan
Written and Illustrated by Merwan
Published by Magnetic Press, Inc

The small, post-apocalyptic zone of Pan is threatened by the hi-tech neighboring Federation of Fortuna, and their only hope is to win the ritualized game known as “Celestial Mechanics”. And their key to winning lies with a girl from the outside named Aster…

8. The Horror, the Horror 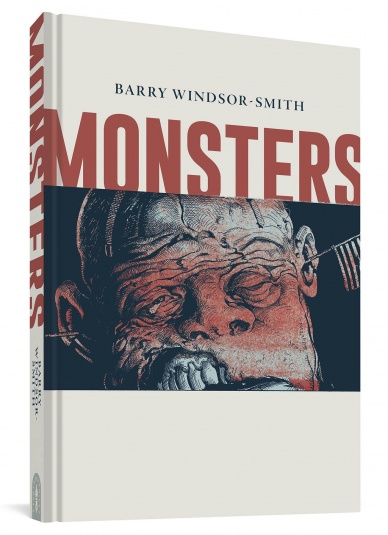 Fantagraphics has kept Barry Windsor-Smith’s “Monsters” on their shelves for an inordinate period of time. Now they’ve decided it’s appropriate to release this book full of “excruciating pain and devastating violence.” Windsor-Smith, 71, has had a long, illustrious career in the medium and I expect the illustrations in this book will be something to linger over and lose yourself within.

Monsters
Written and Illustrated by Barry Windsor-Smith
Published by Fantagraphics

Created over a period of 35 years, Barry Windsor-Smith’s Monsters is a tour de force of visual storytelling. Part family drama, part espionage thriller, part metaphysical journey, it is an intimate portrait of individuals struggling to reclaim their lives and an epic political odyssey across two generations of American history. Monsters is rendered in Windsor-Smith’s impeccable technique, the visual storytelling being the most sophisticated of the artist’s career. There are passages of heartbreaking tenderness, of excruciating pain, and devastating violence. It is surely one of the most intense graphic novels ever drawn. 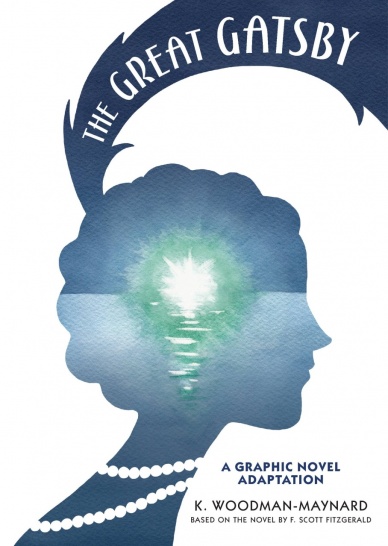 The Great Gatsby enters the public domain on January 1, 2021, and you can bet publishers are lining up to add their rendition of F. Scott Fitzgerald’s seminal work. Although Scribner, the exclusive owners of the material through December 31, 2020, already released a comic adaptation this last year, Candlewick Press has another version ready to go. This one has been cartooned by K. Woodman-Maynard and employs the same modernist watercolor nouveau style Aya Morton did in the Scribner edition. Woodman-Maynard seems to hit the colors harder though, turning in a bright work. Gatsby finally entering the public domain is a good thing and I can’t wait to see, embrace, or roll my eyes at the numerous editions set to saturate the market.

From the green light across the bay to the billboard with spectacled eyes, F. Scott Fitzgerald’s 1925 American masterpiece The Great Gatsby roars to life in K. Woodman-Maynard’s exquisite graphic novel. Painted in lush watercolors, the inventive interpretation emphasizes both the extravagance and mystery of the characters, as well as the fluidity of Nick Carraway’s unreliable narration. Excerpts from the original text wend through the illustrations, and imagery and metaphors are taken to literal, and often whimsical. With its timeless critique of class, power, and obsession, The Great Gatsby captures the energy of an era and the enduring resonance of one of the world’s most beloved books. Available in softcover and hardcover editions. 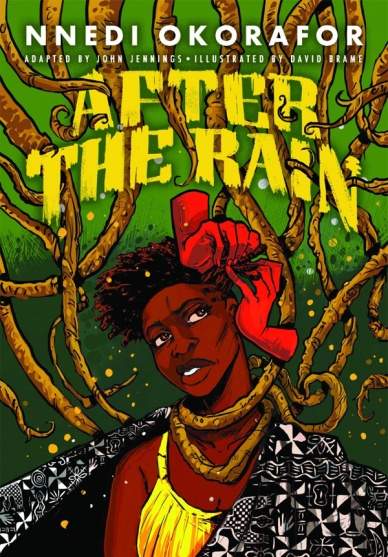 A woman answers a knock at the door and is plunged into a horrific hellscape of Nigerian myths and nightmares. Nnedi Okorafor included this story in her 2013 collection Kabu, Kabu, and now John Jennings and David Brame adapt it for comics. I’m not sure if there was enough story to support a full graphic novel, or if it’ll pad the page, like Miles Hyman’s version of “The Lottery.” Nonetheless, there’s ample opportunity for some petrifying visual work.

After the Rain adapts Nnedi Okorafor’s short story “On the Road.” In a a small Nigerian town, a Nigerian-American woman named Chioma answers a knock at her door and is horrified to see a boy with a severe head wound standing at her doorstep. He reaches for her, and his touch burns like fire. Something is very wrong. Haunted and hunted, Chioma must embrace her heritage in order to survive. 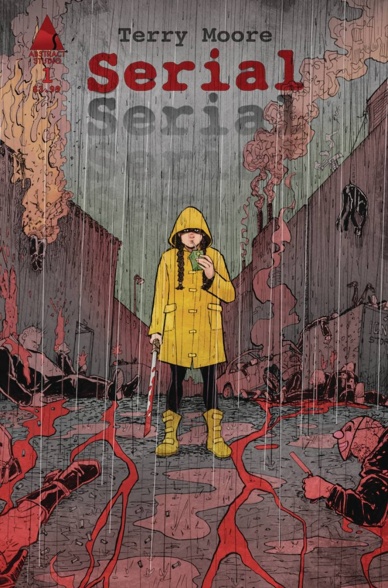 Terry Moore has decided he wants his own inter-connected universe. He centers Zoe from “Rachel Rising” and “Five Years” at the center of this one, a murder mystery where she has to channel her worst impulses to find the true killer. Expect some stellar high contrast black and white cartooning and not enough pages to justify its price tag.

Zoe has been 10 years old for 50 years. Most of her life has been spent on the run fighting the demon that lived within her, kept her young and turned her into a serial killer. Now free of the demon, Zoe discovers her childhood friend is the latest victim in a string of murders. Determined to put an end to the reign of terror, Zoe uses her own deadly skills to stalk the predator and avenge her fallen friend. Serial is Terry Moore’s new series featuring Zoe, the irrepressible star of Rachel Rising and Five Years. Don’t miss the premier issue of a her solo series! 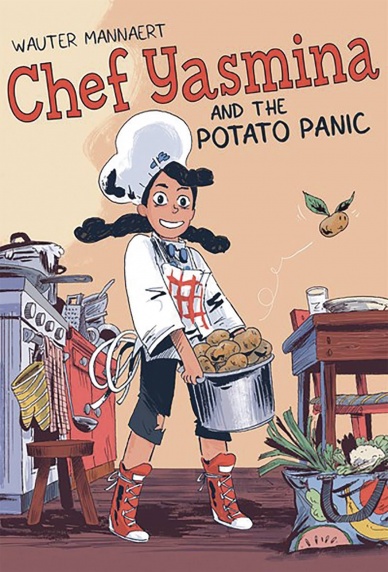 Belgian Wauter Manneart presents this culinary concoction of a comic, like “Chew,” but for kids. Seriously, though, food is such an ideal subject for the medium, and readers who pick this book up might want to have a snack nearby while reading it.

Eleven-year-old Yasmina and her single dad lead a modest life in a cramped apartment in a bustling city. But even though money is tight, they eat like kings. Every day, Yasmina uses her cookbooks and fresh vegetables from the community garden to whip up gourmet meals. That is, until the day the garden is bulldozed and replaced by a field of scientifically enhanced potatoes that are, quite literally, addictive! The whole city – and even Yasmina’s dad – is going mad for these potatoes. What’s the secret ingredient in these potatoes that has everyone acting like a bunch of crazy canines? Yasmina needs to find a cure, and fast! Available in softcover and hardcover editions. 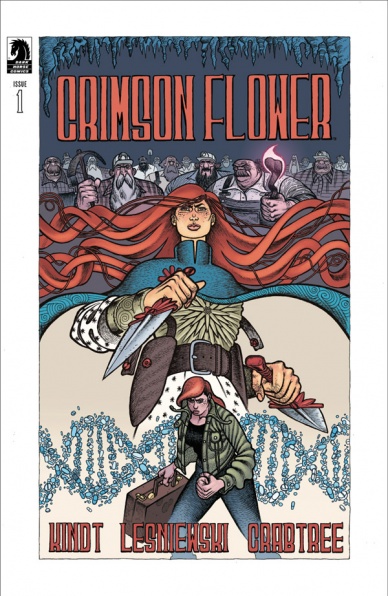 Matt Kindt borrows heavily from himself in his latest mindfuck. He builds this on a backbone of Russian folktales, all of which are rendered by Matt Lesniewski. Lesniewski’s work has an old-school Fantagraphics feel, sort of like R. Crumb but with less body hair and misogyny. The art is wild and energetic and should bring the material to a bizarre, enthralling level.

After losing her family in a violent home invasion, a woman uses folk tales to cope. In a blood-soaked journey toward revenge, she tracks down the man responsible for her family’s deaths, only to discover a startling government plot-to weaponize folk tales and use them to raise children into super assassins.

2. Truck Stops and Pick Up Spots 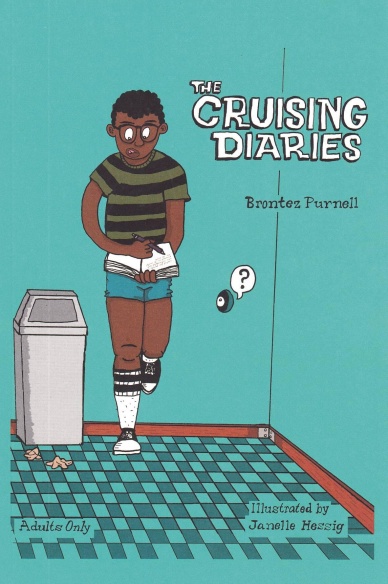 In 2014, Brontez Purnell and Janelle Hessig published “The Cruising Diaries,” a candid, honest, and hysterical look at Purnell’s sexual exploits around Oakland, California. Both creators came out of the zine scene, and with a larger canvas and arguably bigger reach, they did not bother to tone down their antics. Now, seven years later, Silver Sprocket is releasing a new edition, in full color, with additional content. And it’s bound to be just as honest and set to go in raw.

“The Cruising Diaries” is a coming of age memoir that’s not for the faint of heart. Follow author and musician Brontez Purnell on a series of hilarious sexual misadventures through ’00s Oakland. Outrageous tales of taco truck trysts and bathhouse Santas are accompanied by full-color illustrations in this expanded edition. 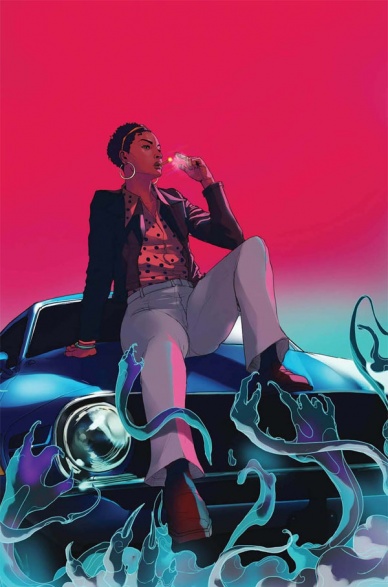 I don’t know if Saladin Ahmed and Sami Kivelä intended to go beyond that first miniseries or if they were facing pressure from the publisher to continue onward, but here we are, back for another round of an investigative monster mash. Although it may take place in 1973, like all the best fantastical fiction, it reflects our current times. Or maybe it’s just further proof that change has been long-coming. Anyway, the first series was great, so there’s no reason to expect this won’t be the same.

* In a new series for fans of Something is Killing the Children and Bitter Root, Saladin Ahmed, the visionary writer behind Miles Morales: Spider-Man, and Sami Kivelä, the acclaimed artist behind Tommy Gun Wizards, reunite for this Must Read supernatural thriller.
* Detroit’s hardest hitting journalist, Elena Abbott, is trying to make a fresh start at a new newspaper…but her deadly past isn’t ready to let go.
* The city is days away from the historic election of a Black candidate as their new Mayor, but a vicious new group has emerged to destroy him, targeting anyone who supports his campaign or the change he represents.
* That means Abbott, who discovers the group’s connection to a dangerous dark magic, has been targeted for certain death – unless she embraces her true power as the Lightbringer to save her city.

Well, that was fun. Let me know what you’re excited for in the comments! 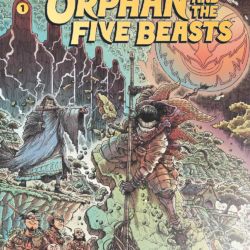 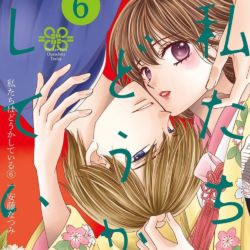 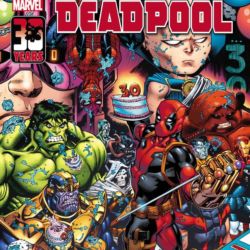