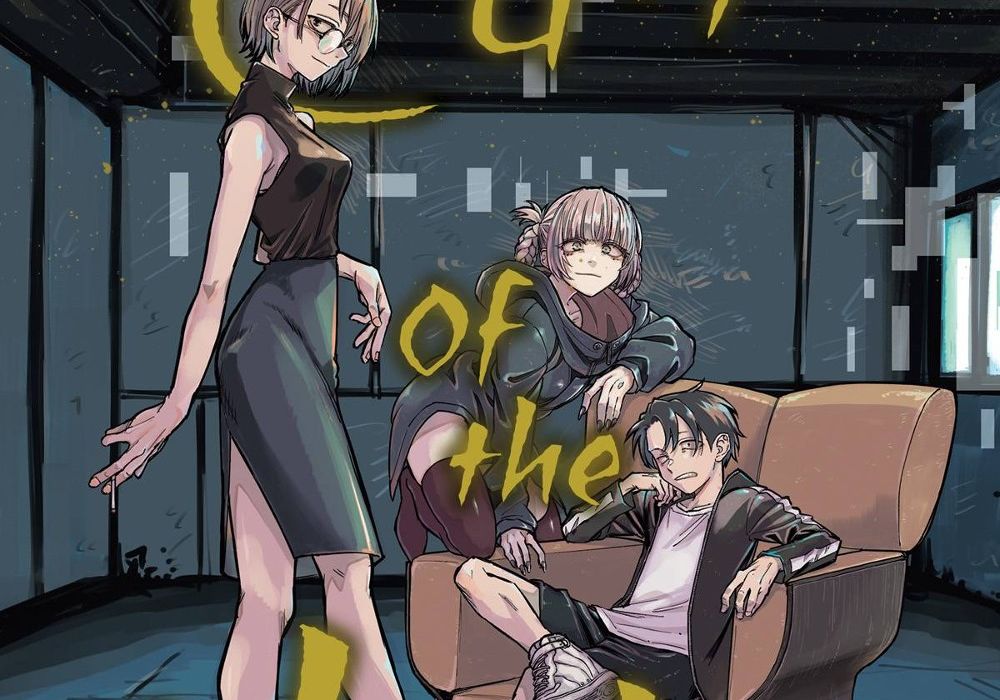 Welcome back, manga fans! December is a quiet month for manga and I’m very grateful for it. I only had to whittle down from 15 instead of 30! Sadly it did mean I dropped a couple long running Shojo I like. Ah well, there’s always next time. Unless Viz or Seven Seas gets bought by Sony/Crunchyroll, refuses to negotiate union contracts, and then completes its vertical integration by buying another huge manga/anime retailer, killing its 18+ and potentialy its home video content in the process.

…It’s been a long month.

10. Break Out the Trenchcoats 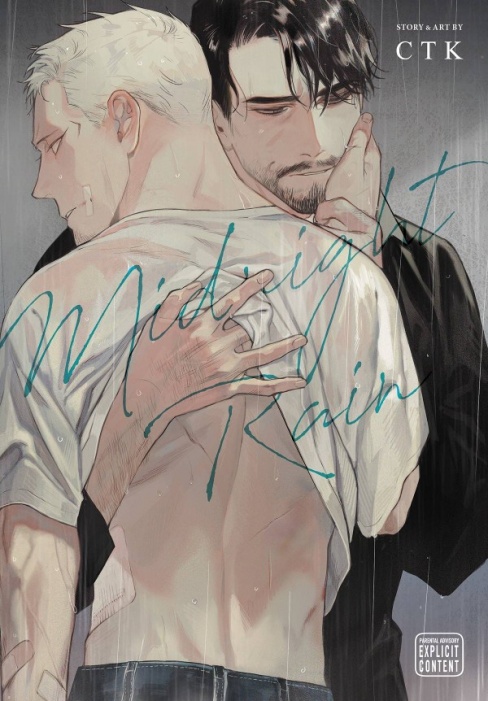 I know it’s not really noir but that’s the vibe I get from “Midnight Rain.” Black & white is an ongoing motif, the characters are struggling along, and all the relationships are tumultuous at best. It seems to be a tone BL gets a lot, at least from SuBLime. I’m definitely worried it’s just going to be a miserable story throughout but there’s enough in the art and description to keep me interested. That and it’s one volume. Small commitments for the win.

Midnight Rain
Written and Illustrated by CTK
Published by SuBLime
Ethan lives a monotonous life trying to pay off his crippling debt-until the day Mike appears at the neighborhood laundromat looking worse for wear. Both men find themselves struggling to go on in different ways, and it’s these struggles that bring them together while simultaneously threatening to tear them apart. 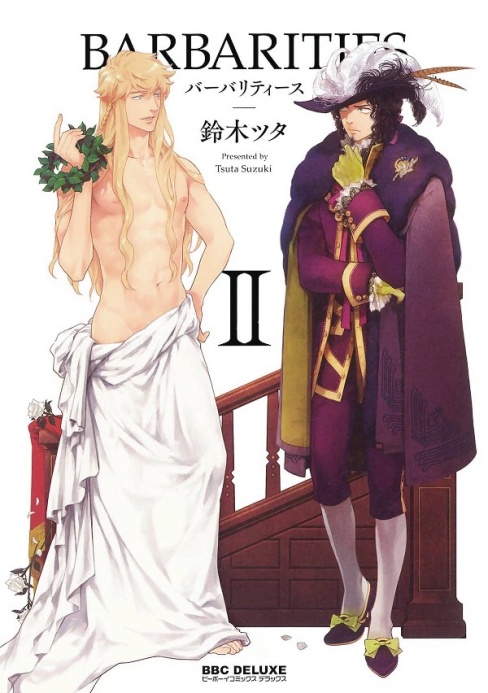 This is about as classic a romance set-up as one can get. Class struggles, aristocrats, hoity-toity shenanigans, and secret lovers. Honestly, all we needed was one of the men on a horse shirtless. Maybe that’ll be volume three.

Barbarities, Vol. 2
Written and Illustrated by Tsuta Suzuki
Published by Seven Seas Entertainment
Lord Montague is a powerful figure in the nation, in need of a bodyguard following a threat to his life. Enter Viscount Adam Canning: a dashing blond-haired nobleman who swears to use his combat skills to protect Lord Montague… and woo anyone who catches his fancy while staying at Lord Montague’s estate. When Adam sees Lord Montague’s nephew, Joel, Adam is immediately smitten. But Joel is a serious young man, too busy rooting out crime and corruption to fall for Adam’s charms. Of course, that just makes Adam want him more! Can Joel stay focused on his lofty ideals, or will he fall for the devilishly handsome viscount? 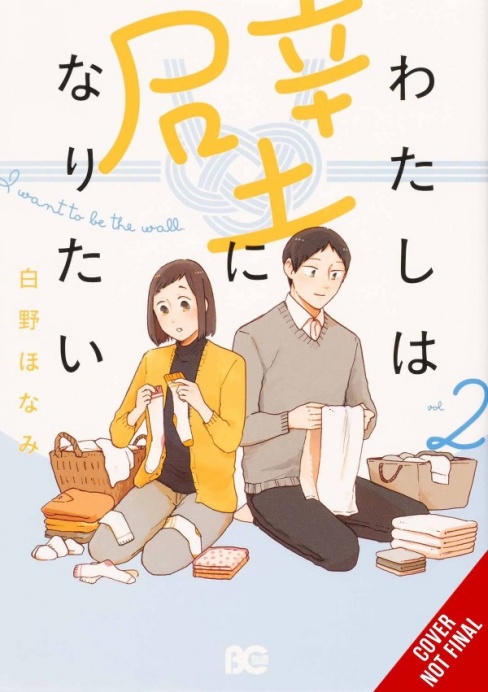 Full disclosure: I haven’t yet read volume one, despite putting it on a previous list. I do have it on hold at my library so that will likely be rectified by the time this goes up. Why am I recommending volume 2 then? Well, the premise remains a winner, I like spotlighting varied queer comics, and I trust Paulina Przystupa’s opinions on manga. Simple as that.

I Want to Be A Wall, Vol. 2
Written and Illustrated by Honami Shirono
Published by Yen Press
Yuriko and Gakurouta recount their first meeting and proposal to a curious Sousuke. Their first impressions may not have been the best, but once they got a chance to have a proper conversation, it turned out they had more in common than they thought! 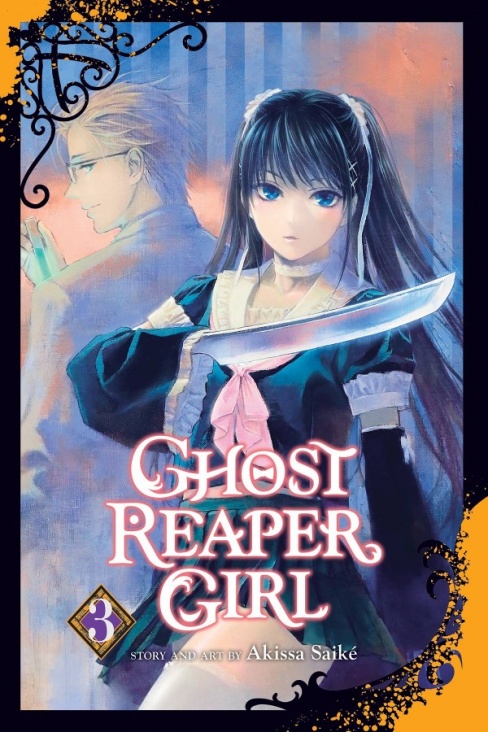 Apparently the “Rosario x Vampire” guy has a new manga! I’m intrigued by the cover – I love the composition- and it seems like volume 3 is already giving us a competition arc for our main character. Who will she feud with? Who will have weird stupid names and designs? All these questions and more…probably won’t be answered but I’ll be on the lookout for them all the same.

Ghost Reaper Girl, Vol. 3
Written and Illustrated by Akissa Saike
Published by Viz, LLC
Chloé’s had nothing but success so far as a spirit hunter, and she’s got the bank account to prove it! But when she takes on a new high-level job, she may have bitten off more than she can chew. Not only is the target a big one, but she’ll also have to get along with other talented hunters who want to claim the prize for themselves! 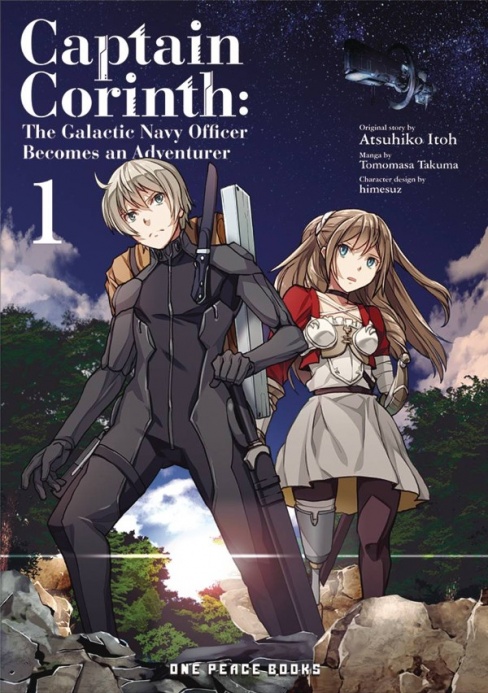 I am wary of this title. The premise of merging a high fantasy world and a sci-fi one isn’t new but the means by which it happens here is fascinating to me. I want to see what’s over the horizon and what it will do with its concept. The cover, however, makes it seem like it might be pretty generic looking and that’s not what you want when selling a story like this. Maybe the description is overselling it? Maybe the cover isn’t representative? I’ll just have to see for myself, I guess.

Captain Corinth, Vol. 1
Written by Atsuhiko Itoh
Illustrated by Tomomasa Takuma
Published by One Peace Books
The distant future: In a universe where humanity’s mortal enemy is the alien race known as Bugs, an Imperial battleship suffers a mysterious and devastating attack that sends Captain Alan Corinth crash landing onto an unknown planet. Much to his surprise, rather than the technologically advanced humanity he knows, the humans he encounters there seem to live in a fantasy world filled with swords and magic! With detailed worldbuilding that brings out the best from both fantasy and sci-fi genres, this story spools out to depths unseen in recent years, expertly rendered into visual format by manga artist Tomomasa Takuma. 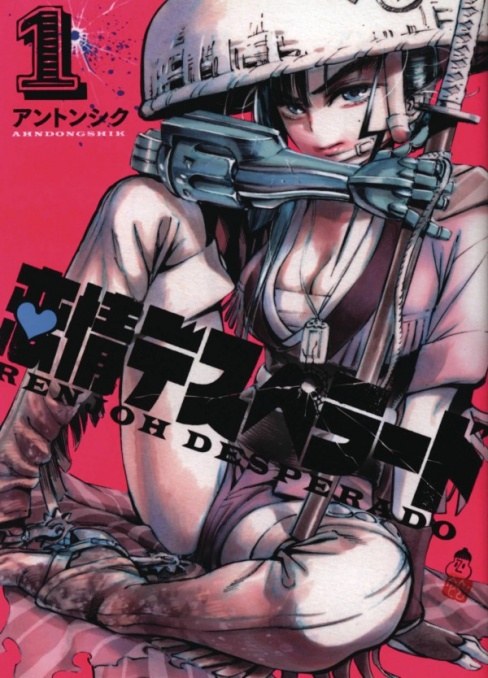 This looks so fucking cool. Shik’s bonkers designs on APPARE-RANMAN are what got me to watch it so of course I’m going to read this. I wouldn’t even care if the premise amounts to a hill of beans. To be clear, I don’t think it will but I have little to go on except the very short summary that also sounds fucking wild.

Renjoh Desperado, Vol. 1
Written and Illustrated by Ahndong Shik
Published by Denpa Books
In a wild-west inspired Japan, a young ninja girl searches for love while avoiding man-eating giant sand-worms and a gun-slinging band of yakuza desperadoes. Ahndong Shik is best known as the character designer and comicker for the animated series APPARE-RANMAN! which debuted in early 2021 via Funimation.

Volume one of this was so cute and I want more already. Please read it. Your heart will be warmed and will thank you.

Baby Bears Bakery, Vol. 2
Written and Illustrated by Kamen Totsu
Published by Denpa Books
Big changes are coming to Baby Bear’s Bakery! First, Bear has been isekai’d and has become the Demon Lord! Now as an evil villain Bear’s current obsession is bad customer service! Mwa ha ha! Then, Bear decides to go to school! There’s still plenty for him to learn, but in this case, Bear’s got his share of topics to teach the next generation of dessert lovers.

3. Turn Right at Murder Street and You’ll Be At Framed Boullivard in No Time

It had been a while since I’d read a real detective story, or a mystery that wasn’t by Kei Sanbe, when I picked up “Lost Lad London.” While I wasn’t a huge fan of Shinya’s art, and I think I said as much when reccomending volume 1, the story had me hooked. It’s excellent and apparently is over with volume three. I’m vibrating with anticipation here and I need to know whodunit.

Lost Lad London, Vol. 3
Written and Illustrated by Shima Shinya
Published by Yen Press
Al and Ellis continue their search for the true murderer of the mayor of London, but they still have no idea just how far the culprit’s evil influence stretches… 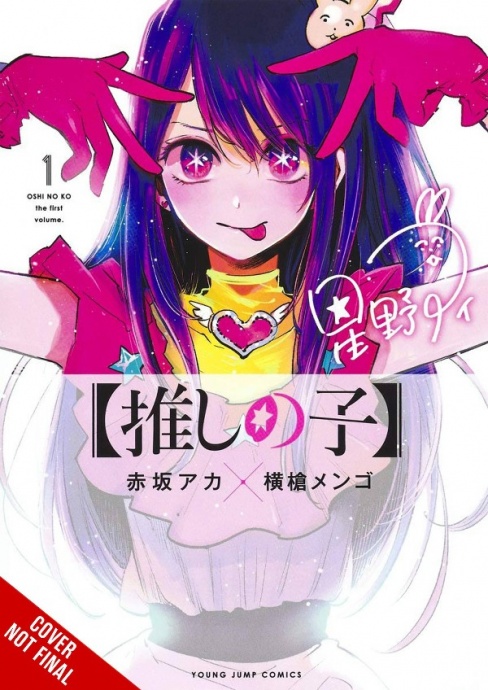 Akasaka has apparently redefined the rom-com with “Kaguya-sama” while Yokoyari’s “Scum’s Wish” is a complicated, twisty story of desire and moral failings. I have no idea what putting them together on a project will be like, especially when the actual premise is being kept close to the chest. All I know is I want to read this NOW. I’ll figure out if it’s good some other time.

Oshi No Ko, Vol. 1
Written by Aka Akasaka
Illustrated by Mengo Yokoyari
Published by Yen Press
Gorou is a gynecologist and idol fan who’s in shock after his favorite star, Ai, announces an impromptu hiatus. Little does Gorou realize that he’s about to forge a bond with her that defies all common sense! Lies are an idol’s greatest weapon in this outrageous manga from Aka Akasaka (Kaguya-sama: Love is War) and Mengo Yokoyari (Scum’s Wish) 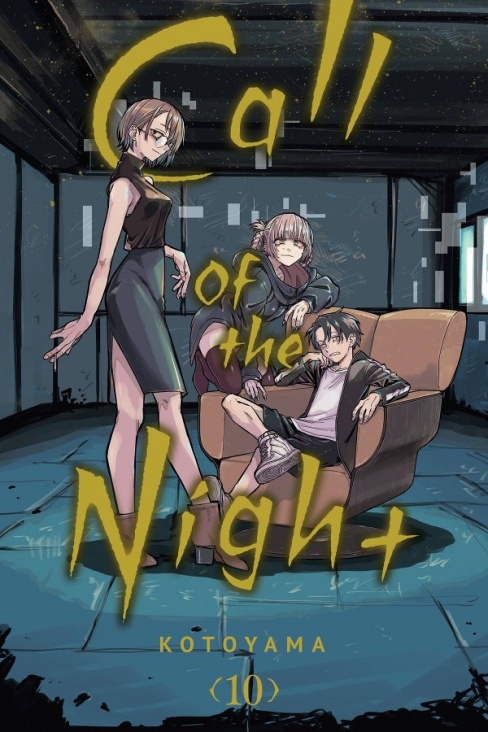 Back when I first recommended “Call of the Night” last year, I had no idea it would get as big as it was thanks to a really gorgeous anime adaptation by the Vanitas guy. I also didn’t think I would like it as much as I did, considering I wasn’t much of a fan of “Dagashi Kashi,” Kotoyama’s previous manga. In fact, I still think putting this volume at #1 is a bit overselling it.

The series continues to get better the longer it goes on and having read at least 7 volumes, I’ve got a rare opportunity to recommend something I HAVE read instead of guessing with the 50-60 vol 1s & 2s I haven’t. The art is clean and sharp, the environments have a liminal emptiness to them, the plot is thickening, and there’s a new haircut! I can’t think of a better way to celebrate double digits than that.

Call of the Night, Vol. 10
Written and Illustrated by Kotoyama
Published by Viz LLC
Kyoko launches her ambitious master plan to rid the world of vampires. When Ko becomes collateral damage, it leads to questions about the state of his humanity. Then, some relationships get mended while others are broken. The question remains: who turned Kyoko’s father? Plus, a new haircut! 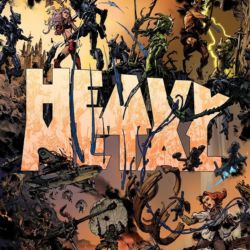 Soliciting Multiversity: The Best of the Rest for February 2023

Hello and welcome to Multiversity’s look at the “Best of the Rest” of what’s coming your way in the now-available December 2022 Previews catalog. I’m excited to help you navigate the vast majority of what Diamond is offering via your LCS for the month of February 2023. Having already taken a look at what Marvel, […] 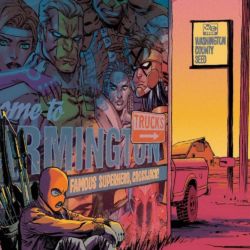 Looking at the early part of the year, you can see Image working to refine their line, setting a tone. And judging by this… it’s going to be a spooky one. Horror comics seem to be getting big traction at the third biggest comics publisher, so there’s a lot of genre + horror books coming […] 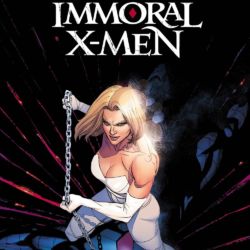 With January out of the way, Marvel’s February releases bring us a nice mix of new series, one-shots, and continuations of ongoing favorites. We’ve got a lot of comics featuring the X-Men in a less-than-beautiful future, while the present continues to be pretty sour for Spidey, and of course, Blade’s daughter makes her debut.Plus, plenty […]