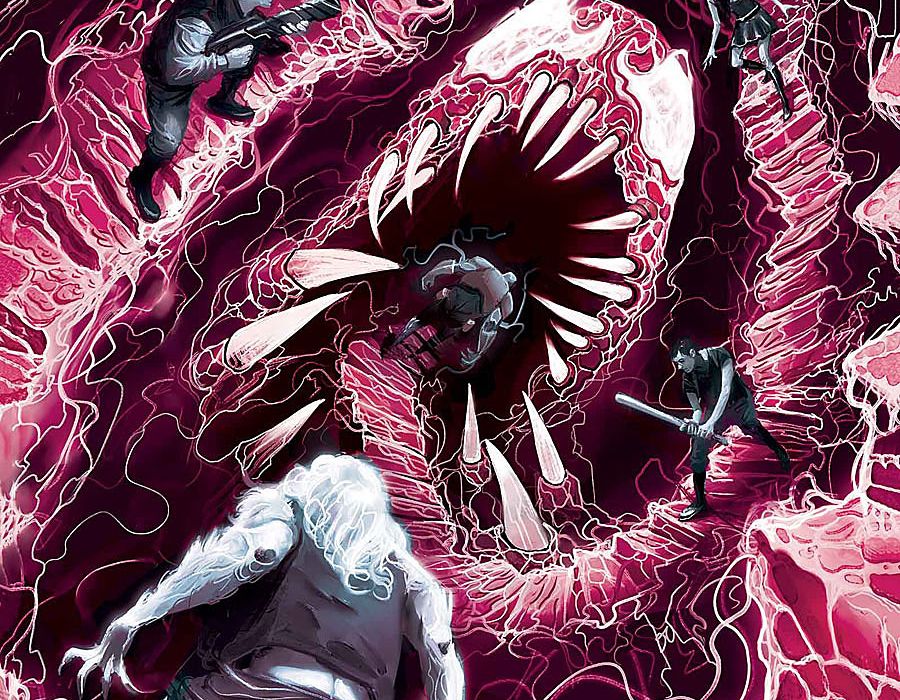 The watchful, completely objective and correct gaze of Soliciting Multiversity now falls upon Marvel’s crop of titles for July! Check out our picks below and let us know what stuck out to you in the comments. 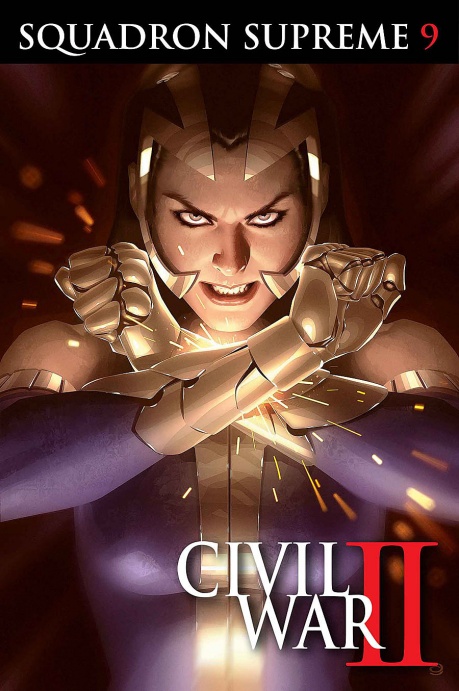 Two reasons I wanted to talk about “Squadron Supreme” #9. First of all, my husband Namor is being resurrected which is always a cause for celebration. Second, how does this relate to “Civil War II” at all? Like, I know that all comics need to tie-in to “Civil War II” for that sweet buy bump, but this doesn’t look remotely related to Captain Marvel v. Iron Man. Unless “Civil War II” ends with Namor showing up and dazing everyone with his abs long enough for both sides to get along again. Whoa, I think I just spoiled “Civil War II”

SQUADRON SUPREME #9
JAMES ROBINSON (W) • ACO (A)
Cover by ALEX GARNER
ACTION FIGURE VARIANT COVER BY JOHN TYLER CHRISTOPHER
YOUNG VARIANT COVER BY SKOTTIE YOUNG
CIVIL WAR II TIE-IN!
OVERSIZED WARRIOR WOMAN Spectacular!
• Now that Warrior Woman has revealed her true identity to the Squadron Supreme, we focus on her life — her past, present and future — in a special solo issue.
• Now the ruler of her own country and sovereign leader of the Alien Myriad, Warrior Woman plans an even greater feat of world conquest. But to do this, it will first require a vision from the Profiler…
• …and the resurrection of Namor, the Sub-Mariner.
• Also, learn the surprising fate of the Power Princess whose identity Warrior Woman stole.
• A CIVIL WAR II TIE-IN AND PRELUDE TO THE NEXT MAJOR STORY ARC “FINDING NAMOR.”
40 PGS./Rated T+ …$4.99 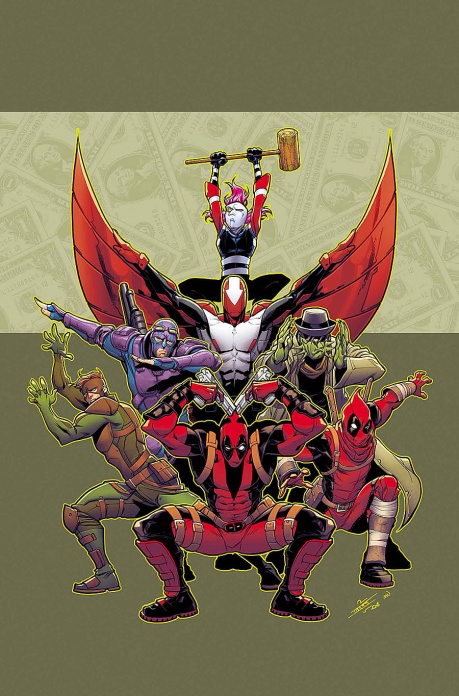 DEADPOOL & THE MERCS FOR MONEY #1
CULLEN BUNN (W) • IBAN COELLO (A)
Cover by Iban Coello
VARIANT COVER BY GIUSEPPE CAMUNCOLI
ACTION FIGURE VARIANT COVER BY JOHN TYLER CHRISTOPHER
YOUNG VARIANT COVER BY SKOTTIE YOUNG
HIP-HOP VARIANT COVER BY TBA
BLANK VARIANT COVER ALSO AVAILABLE
Deadpool is one of the best mercenaries on the planet. He may even be a passable Avenger—jury’s still out. But one thing’s for sure—Deadpool is a terrible team leader. Think we’re lying? Ask the Mercs for Money! Deadpool’s taken on a new high-paying mission to take out radioactive super villains…and his Mercs aren’t nearly as immune to radiation as his healing-factored heinie is. Deadpool veteran Cullen Bunn brings us mo’ mercs, mo’ money and naturally, mo’ problems.
32 PGS./Parental Advisory …$3.99

I… I reviewed this a few months ago didn’t I? Holy crap I did. I get that the first run might have been a mini-series but couldn’t you have just continued from there? I hope every issue of “Deadpool & The Mercs for Money” from now on is a #1. I hope Marvel only ever labels their comics #1. They don’t have to reboot every issue or anything, just make it all really confusing for everyone who isn’t trade waiting. 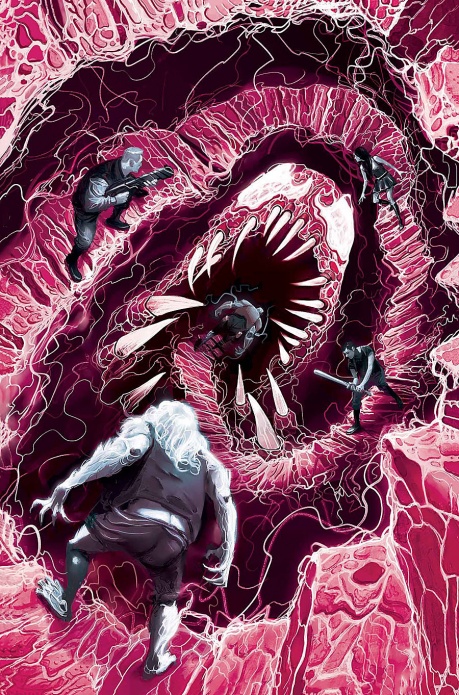 There’s not really a reason why I chose “Carnage” #10 specifically, but I found it really weird how nearly every Marvel comic this month had some betrayal. Toxin and Man-Wolf (I love comic books) have a traitor in their group, Warrior Woman was doing something to the Squadron Supreme, and stories like “The Vision” and “Civil War II” are entirely based around some betrayal, or at least some deep distrust. Kind of says something weird about the zeitgeist for comics when nearly every book is based on some form of deception.

CARNAGE #10
GERRY CONWAY (W)
MIKE PERKINS (A)
Cover by MIKE DEL MUNDO
• One of our heroes has joined Carnage in his rampage!
• But which of them is the traitor?
• Will Toxin, Man-Wolf, and company survive this betrayal?
32 PGS./Rated T+ …$3.99

7. The Comic We’re Going to Have to Talk About 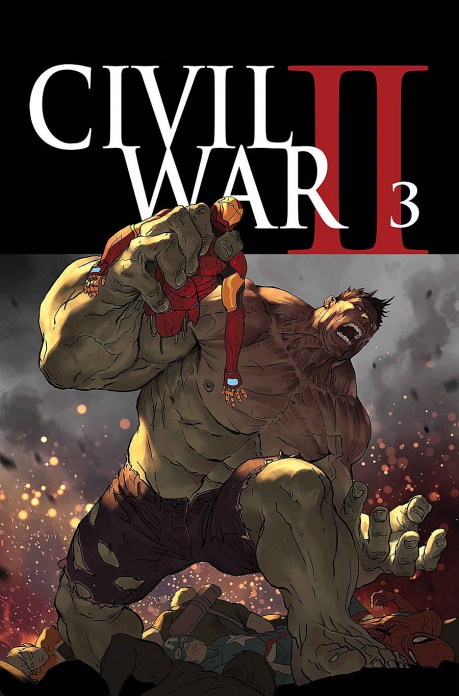 Marvel says this is the comic book that everyone’s going to be talking about so I guess that means someone dies. That’s every “what everyone will be talking about” moment in a crossover. There have been some spoilers leaked onto the internet, so it seems kind of apparent what this big twist will be, but we’ll have to wait until July to see who bites the dust.

CIVIL WAR II #3 (OF 7)
BRIAN MICHAEL BENDIS (W) • DAVID MARQUEZ (A)
Cover by MARKO DJURDJEVIC
VARIANT COVER BY MICHAEL CHO (APR160864)
CONNECTING BLACK & WHITE VIRGIN VARIANT D COVER BY KIM JUNG GI (APR160863)
CHARACTER VARIANT COVER BY PHIL NOTO (APR160865)
This is the one everyone will be talking about! One of the biggest heroes in the Marvel Universe will fall! Who it is and how and why will divide fans for years to come. Will the heroes of the Marvel Universe survive the unthinkable happening? The fallout to this issue is enormous!
40 PGS./RATED T+ …$4.99 (APR160862) 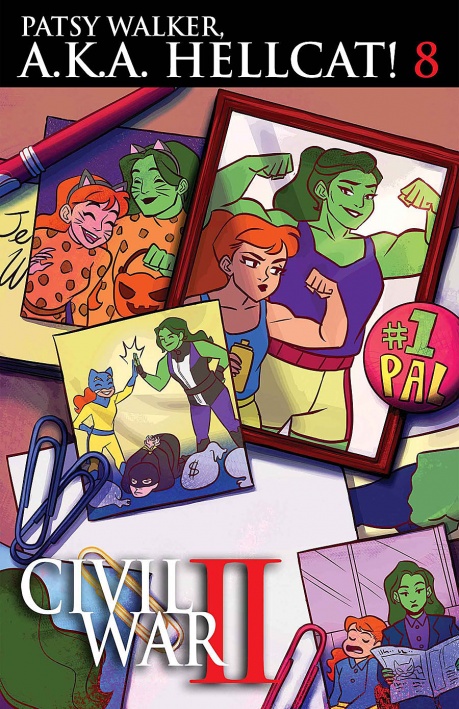 Or we can look at the cover for “Hellcat” #8. Uh, sorry Shulkie. You were always my favorite Smash Bro. 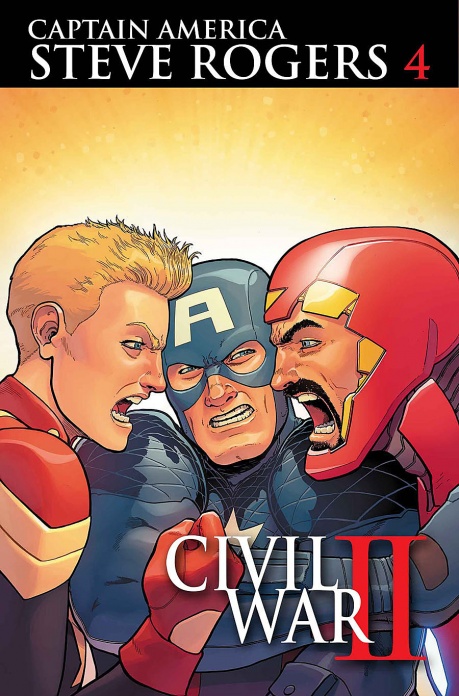 Captain America’s involvement in Civil War II should consist of him worriedly following Carol at all times, insisting she wear a bulletproof vest at all times. Maybe he’ll see a nurse walk by, point out that she’s the real hero, and get Iron Man and Captain Marvel to stop fighting. No, I’m not still salty over “Civil War I”. 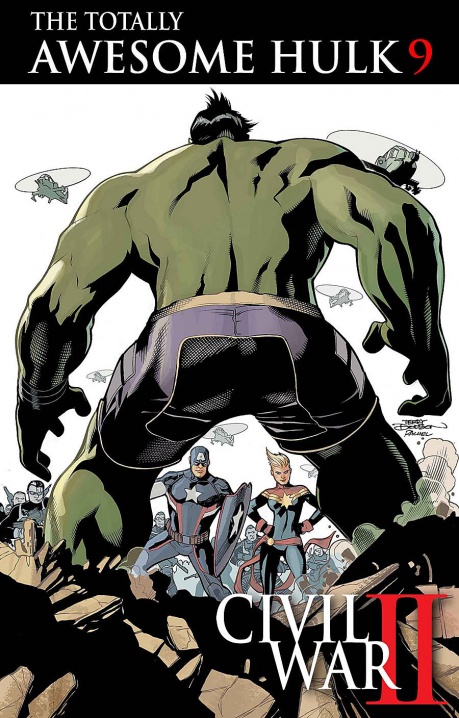 Sorry to keep pointing out vaguely obvious deaths, but this solicit mentioning that Amadeus lost someone close to him in a series where his kid sister was suddenly introduced out of nowhere is kind of a self-fulfilling prophecy. Man, solicitations are not the best way for comic books to be discussed. Anyway, hell yeah to Mike Del Mundo on “Totally Awesome Hulk”! 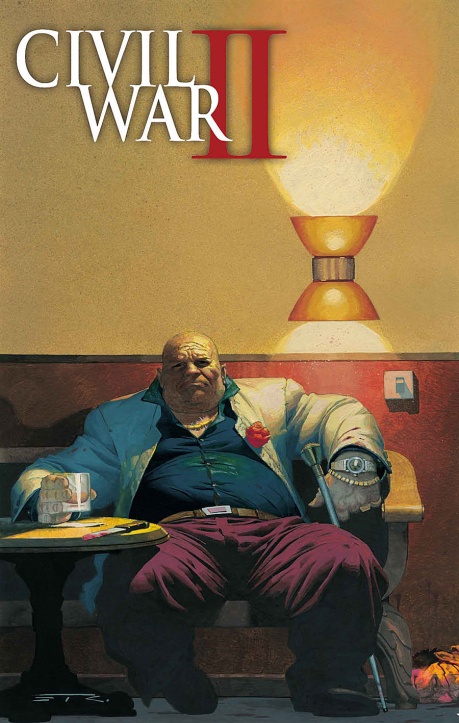 I’m a sucker for tie-ins that focus on the larger world being affected by whatever the year’s big crisis is. That heist mini-series from “Infinity” was pretty dope, and so was that issue of “Hitman” where everyone realized the Sun was dying so they hung out in the backyard and told stories. Seeing how Kingpin reacts to the new Civil War should be a good time, especially if he smashes in some dude’s head with a car door.

CIVIL WAR II: KINGPIN #1 (OF 4)
MATTHEW ROSENBERG (W) • RICARDO LOPEZ ORTIZ (A)
Cover by AARON KUDER
VARIANT COVER BY ESAD RIBIC
YOUNG VARIANT COVER BY SKOTTIE YOUNG
BLACK PANTHER 50th ANNIVERSARY VARIANT COVER BY JAMIE MCKELVIE
An Inhuman with the ability to predict the future has helped the heroes of the Marvel Universe clamp down on crime before it can even happen. While this thwarts most criminals, one man has found a way to keep doing what he does best. Wilson Fisk has managed to stay one step ahead of the good guys and his crime enterprise is BOOMING. But what’s his secret?! Rising stars Matthew Rosenberg (We Can Never Go Home) and Ricardo Lopez Ortiz (Wolf) present a gritty, street-level view of CIVIL WAR II starring the Kingpin in a world without crime!
40 PGS./Rated T+ …$4.99 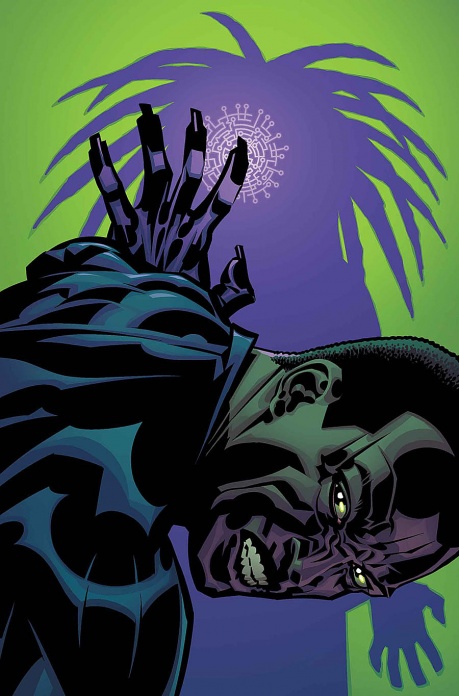 BLACK PANTHER #4
TA-NEHISI COATES (W) • BRIAN STELFREEZE (A/C)
DEATH OF X VARIANT COVER BY TBA
CONNECTING VARIANT COVER D BY SANFORD GREENE
• “A NATION UNDER OUR FEET,” the first arc of the new hit BLACK PANTHER series, comes to a startling conclusion!
• Suicide bombers terrorize the people of Wakanda, further eroding any last bits of goodwill towards the royal family…
• T’Challa struggles to unite his citizens, who are choosing to side with Zenzi and The People in growing numbers…
• A familiar villain reveals his part in T’Challa’s current ruination…and it’s not who you think!
32 PGS./Rated T …$3.99

Even though I’ve basically been a complete Negative Nelly for the last two Soliciting Multiversities, I want to take this time to address two (out of a couple) books at Marvel that are knocking it out of the park without getting involved in that “Civil War II” mess. “Black Panther” #1 was a really strong debut issue and, like our next entry, is the kind of work that is revitalizing a character who previously did not get as much love as they deserved. Please buy “Black Panther” while I read and subsequently recap “Civil War II” on this site. I beseech you. 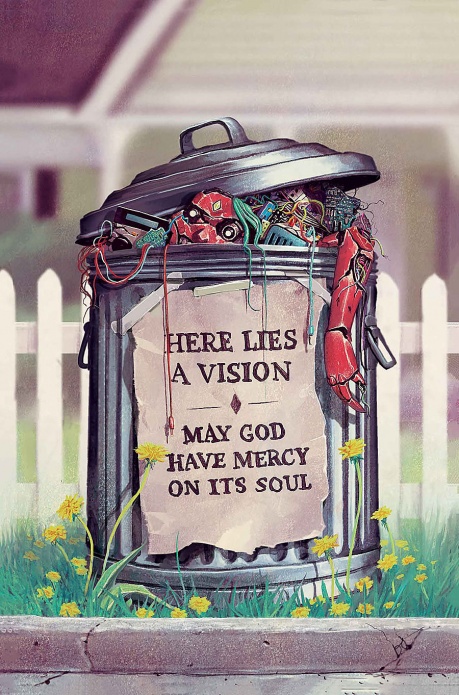 Everything I just said above can also be applied to “The Vision” which feels like the edgiest comic Marvel has put out in a long time. I don’t mean edgy as in “The Vision is doing drugs and getting teenagers pregnant” or whatever. It’s a Big Two comic book that feels like it has actual stakes which is a damn rarity in 2016. If you haven’t been checking it out, I can’t think of a book that’s more worthy of your time than “The Vision.”

THE VISION #9
TOM KING (W)
GABRIEL HERNANDEZ WALTA (A)
Cover by MIKE DEL MUNDO
• Every family has its share of secrets – skeletons in the closet, kept hidden from the world at large.
• For the Visions, those secrets are real, actual skeletons.
• The thing about secrets is they always have a cost… and one of the Visions is going to pay with their life.
32 PGS./Rated T+ …$3.99 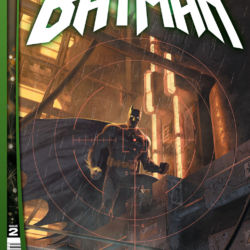 ‘5G’ ‘Future State’ is here! While there is the usual range of pre-opinions about this out there, I am firmly in the ‘excited’ camp. Why? Well, it’s a combination of exciting creative teams, interesting takes on characters, and the beloved anthology books I’ve been hankering for (both on and off the DC3cast) for years now. […] 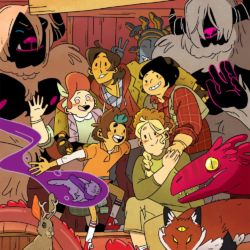 Soliciting Multiversity: The Best of the Rest for December 2020

We’re nearly at the end of this hellish year. And though it’s not like all these problems are going to go away in 2021, as if a persistent and rampant systematic racism and sexism and homophobia and oppression we see in our day to day life is going away, maybe there’s a chance we’ll have […] 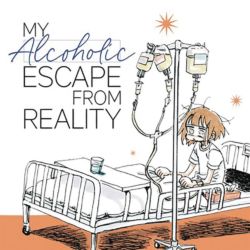 We’re back for another month of dungeon crawling through the Diamond catalog to find the gems of the manga world to highlight. Well, sometimes they’re gems. Other times they’re fools gold. And sometimes they’re just a shiny rock that I think is cool. You can’t judge me.