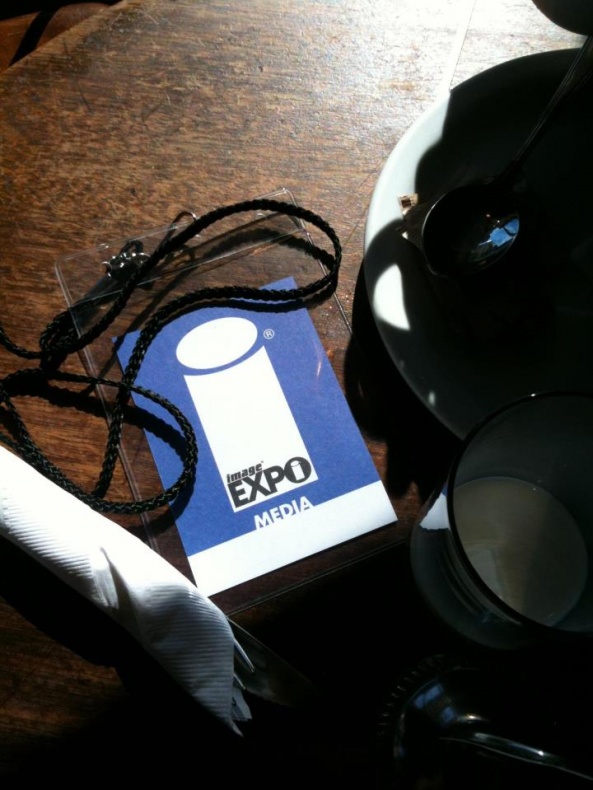 How we were first introduced will be lost to the sands of time, but there I was having breakfast with her one brisk Sunday morning in Oakland, California. I had decided to attend ImageExpo on a whim, which happened to be celebrating 20 years of Image Comics, and she mentioned that she was also going.

“Susan Damon,” I replied as I reciprocated her smile. “In the flesh. Finally.”

“Hah! I know. It’s great to finally meet in person.”

For years we had been friends purely through the web of social media, and now we were face to face discussing the connecting thread that tied our friendship together. We figured it had to do with our mutual friend, Steve Niles. In fact, it had become a running joke that the three of us never managed to be seen together at any given moment. Any time two of us ran into each other, we’d snap a photo and send it as a reminder to the third what he/she was missing out on.

“Congratulations on your successful Kickstarter campaign,” I said.

This was pretty awesome considering she had written, produced, and starred in the first season of a very funny web-series entitled Moon Cycles: A werewolf relationship comedy. Her Kickstarter campaign was raising funds to improve the production quality of season two by including a wider variety of shooting locations that were to take place bi-coastal in Los Angeles and New York, and featuring quality special fx.

“Thank you! It was stressful up until the very last moment, but I’m excited to start up Season 2 with an actual budget.”

I was inspired. Her tenacious creative output was contagious. One of the best aspects of our friendship was a reciprocated source of motivation that we provided each other. Every new episode she’d debut reminded me of how fun creating art could still be, and she loved the independent side of comics that I was exposing her to. Even though I had nothing to pitch during the convention weekend, I spent it amongst friends like Susan, Kurtis Wiebe, Ed Brisson, Jason Copland, and Tyler Jenkins. All of them produced the kind of work that made me want to chain myself to a desk and write until my hand went numb.

Inspiration is a delicate thing. How to foster it varies on the individual, and requires an honest and thorough self-assessment in order to determine what makes your creative clock tick. The nice thing about comic books is that this self imposed evaluation doesn’t need to be done in isolation. I’ve found that it’s much more effective and conclusive amongst friends. Establishing a close-knit creative support group can become an oasis for when you find yourself dried out from over-analyzing your concepts and stories.

ImageExpo was a weekend of non-stop inspiration. The fact that it was being hosted by my favorite independent publisher, I was a kid in a candy store. The keynote speech by Eric Stephenson set the perfect tone for the past, present, and future of Image Comics. I couldn’t help but envision one of my books eventually finding a home with them someday.

During the first day, I had the pleasure of sitting with Kurtis’ as he sold his books, and got to experience life on the other side of the table. Next to us was Tyler Jenkin’s table, and it was very easy to see how their solid friendship produced an ongoing series as great as Peter Panzerfaust. Their mutual love for the story translated right off the page as dozens of fans approached them with pure gratitude for their creation.

I spent the rest of the day stopping by friend’s tables to catch up on their current events. It was a very new experience to be attending a convention with friendships tied to established creators in the industry. Even though I didn’t have anything to show prospective editors, I continued to network, and actually felt more relaxed doing so without the added pressure of getting a pitch into someone’s hands.

Even though I didn’t have anything formally printed didn’t mean that I came completely unprepared. Later in the weekend, Kurtis walked me over to the Image Shadowline booth to introduce me to Tim Daniel. I had been following Tim’s work ever since buying Nick Spencer’s and Joe Eisma’s Existence 3.0 trade, so I was very excited to get to meet him. It was because of his top-notch production work that I started noticing the importance of collaborating with an experienced designer to elevate the value of my projects.

“Tim, this is my good friend Jeremy Holt. He’s a fellow writer that I thought you should meet,” said Kurtis.

Older with a very distinguished salt and pepper beard, I remember thinking his baseball cap and flannel shirt exuded a very youthful and relaxed vibe. Spending nine hours a day for five years behind a Genius Bar at Apple Retail, I was an expert at sizing someone up purely off body language. This was no exception. We instantly connected and he was kind enough to invite me behind the booth to chat.

“Show him what you got,” Kurtis nudged. 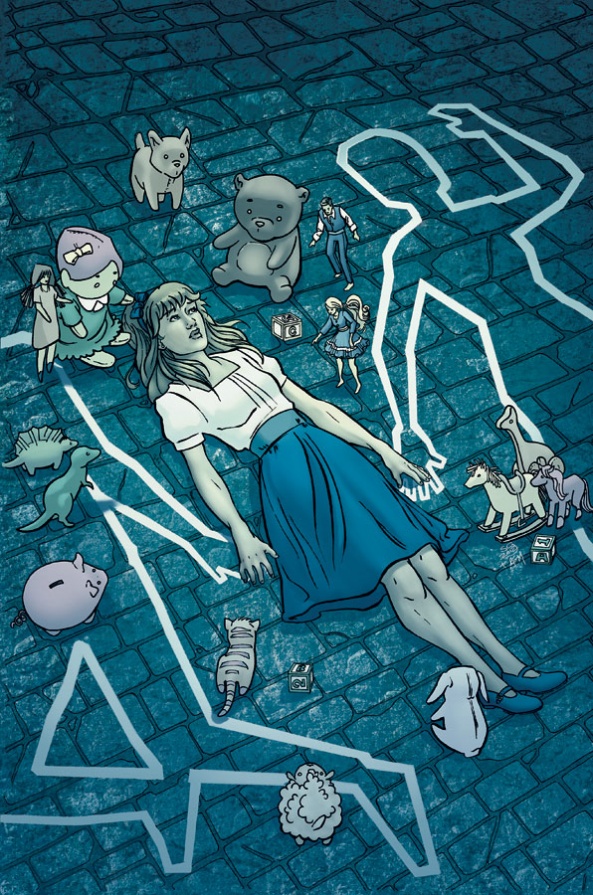 For any creator out there that doesn’t have their work readily available via a mobile device, you’re doing yourself a huge disservice. All thanks to the modern tech miracle that is Dropbox, I happened to have completed pages and a cover from my latest series Cobble Hill on my iPhone.

“This cover is beautiful, Jeremy. No joke,” exclaimed Tim. “Who have you shown this to?”

“No one yet. I’m looking to have a polished pitch ready for Emerald City Comicon next month.”

“I see this finding a home at Image or IDW even. Hold on a sec.”

He reached for a bookmark advertising his graphic novel Enormous that was debuting later in the summer through Image Shadowline, and wrote down his email address.

“Seriously, that cover is stunning. Would you mind sending me a hi-res copy? I’d love to dabble with a logo for it.”

A week later, he sent me logo concepts and within a few days, we had a finalized version. His genuine support and enthusiasm for the project was quite humbling, and I was speechless after he agreed to design the rest of the pitch for me. To collaborate with someone so seasoned was new territory for me, after all, who was I to garner such support? I attribute the appeal of Cobble Hill completely to my co-creator Selena Goulding. If it wasn’t for her, I would have written another generic ultra-violent murder mystery. My love of her work inspired me to step outside my comfort zone and attempt to write something that best incorporated her artistic sensibilities. Little did I know it was equally as fun and rewarding to write a young-adult story as it was to write a dark mature content one. Before, I’d rely on intense graphic imagery to push the story along; Now I was enhancing intrigue through more clever plot twists, all the while never forfeiting the integrity of the characters that were geared towards a younger audience. Building a shared love for the story and its characters established a creative foundation that up until that point, I’d never experienced before with a collaborator. We believed in the book, and had faith others would too.

The week leading up to Emerald City Comicon, I happened to be on a date when I got a message from Tim requesting my immediate attention. I excused myself and called him to learn that Image Shadowline was interested in hearing more about Cobble Hill after Tim mentioned it quite favorably to the Editor-In-Chief, Jim Valentino.

“Hey Dude, just got off the phone with Jim. I sent him the Cobble Hill cover, and he asked to see some pages along with a brief series synopsis,” explained Tim.

“Seriously?! Okay. I’m not at my computer right now, but could be home in half an hour.”

“Sounds good. He’s currently looking to fill next year’s schedule, so get me the files A.S.A.P.”

“Yep. Actually, he recently got an iPad, think you could format it for that? It would be best to make it super easy for him to view the pitch.”

“No problem. I’ll have the files prepped and sent to you in an hour.”

Apologizing to my date, I cut things short and rushed home. I managed to catch my letterer Ed Brisson at a good moment, and he quickly formatted the pages for me by the time I sat down at my computer. I drafted a very brief synopsis of the series in two short paragraphs, and along with the formatted pages, sent the files over to Tim. Certain that I’d hear back relatively soon, I was a bit disappointed when I didn’t as I boarded my flight for Seattle.

“I’m sorry, man. He was adamant on seeing the pitch before he left for Seattle. Now, I have no idea what his plans are,” explained Tim the night before. “He’s going to be there this weekend. I suggest just introduce yourself. It’ll be very easy to gauge if he’s interested at all in hearing your pitch. Feel free to mention my involvement with the project.”

Over 2,400 miles away from home, I landed in the emerald city to discover an extremely surprising tweet, which to this day still makes me smile.

Attending my fifth convention in two years, and armed with two of my best pitches to date, that affirmation from Skybound gave me a new level of confidence that I didn’t know existed. It revealed that the last two years of successful networking was actually paying off. This reminded me of something my Mom used to say to me, “You are who your friends are.” Surrounding myself with like-minded inspired people reflected in the major improvements I had made concerning my own craft–personal advancements that more important people were clearly taking notice of.

Even though my future in comics was still unclear, I found strength and clarity in knowing that I was never going to be short on a little inspiration from my friends. Evidently it wasn’t enough to calm my nerves as I approached the Image booth to find Jim Valentino in the middle of a signing.