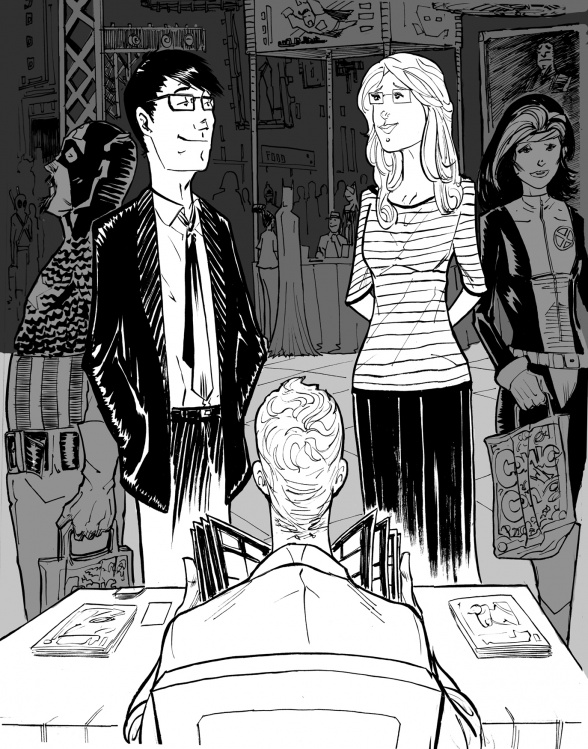 Definitions for the word conviction:

a : a strong persuasion or belief

b : the state of being convinced

In the weird world of comics, fledgling creators need to have an ample amount if they’re going to get a foot in the door. What does this mean exactly? Well for starters, it requires strong communication skills that exude confidence, but not arrogance; charm, but not kiss-assing. This craft can be honed with multiple opportunities to briefly chat with an editor, but I’ve never been able to sustain it during a first meet.

Case in point: There I was in front of Editor-In-Chief of Image’s Shadowline imprint that could take my career to the next level, and I suddenly felt every ounce of conviction evaporate in a gut-retching instant.

He didn’t look up, or even acknowledge my presence for that matter. To be fair he was in the middle of a stack of Shadowhawk sketches.

“I recently submitted Cobble Hill to you,” I continued in an attempt to jog his memory.

“Well, Tim Daniel recommended that I introduce myself. ”

If I wasn’t paying close attention I would have missed it, but he actually paused to glance up at me, and registered who I was when he said, “What’s the story? Go on, tell me.”

Having practiced my elevator pitch so many times, it rolled off my tongue confidently and effortlessly. Without indicating what he thought as he returned his focus to his sketches, he concluded with, “Uh huh. I’ll let you know.”

The rest of the convention was a lot of fun, mostly because it allowed me to hang out with my friends that I was only getting to see a few times a year. Much to my surprise, my co-creator Selena Goulding decided to attend, and we spent the weekend pitching Cobble Hill to several other editors–most notably, Sina Grace, then Editorial Director at Skybound Entertainment.

Locating him at the Image booth, he greeted me with a smile and said, “Gimme Gimme, where are your pitches?” I handed him two copies of Cobble Hill and Primordial, which he happily took and was perusing as I made formal introductions.

“Sina, this is my co-creator of Cobble Hill, Selena Goulding.”

As my first comic that was intentionally geared towards a young-adult demographic, Cobble Hill was a story I didn’t even know I wanted to write. I was unaware of this because I had never thought about shifting gears from the mature content that I typically wrote, to a more accessible one. This was the by-product of falling in love with Selena’s art style. My belief in her art was strong enough for me to re-evaluate my original concept for the series. I asked her what types of stories she liked to draw, and from there made the necessary revisions that eventually got her to sign onto the project. By allowing her to draw a story that she inherently loved on personal preference alone, she believed in the project enough to forfeit a page rate.

Selena and Sina chatted for a bit while I said hello to a few of the Image Comics staff that I’d gotten to know over the years. It’s important to realize that conviction doesn’t have to be utilized for just pitching a book. It can pay dividends when used to extend your network. It’s no secret that the industry is small and because of that, you never know who might know who. I’ve found that it’s equally important to become a friend to people, not simply a creator.

After an action-packed and productive convention weekend, I returned to New York feeling optimistic about my time spent in Seattle. On a whim, I submitted Cobble Hill to the small press publisher 215 Ink. I had heard a lot of glowing reviews from friends that had published work through them, and admired their focus and love of creator-owned comics. Depending on who you talk to, submitting to multiple publishers simultaneously differs in opinion. Very much like dating, I believe it never hurts to play the field.

Around this time, I eventually heard back from Jim concerning the pitch. We exchanged a few emails discussing the series, but he eventually inexplicably passed on it. I felt like I had tripped right before the finish line. Strangely enough just like his unexplained rejection, my optimism remained up for no discernible reason. For the first time ever, I wasn’t phased by doubt in what I had created with Selena, and it felt rejuvenating.

A few weeks later, my good friend Susan Damon [mentioned in last month’s installment] came to New York to film scenes for Season 2 of her web series Moon Cycles. As I was hanging out with her and some of the cast and crew, I received an unexpected email from Andrew DelQuadro, publisher of 215 Ink, indicating that he loved Cobble Hill and wanted to proceed with publishing it.

In almost four years since embarking on my quest to get published, someone else had finally approached me with an equal amount of conviction in my work. After reviewing their terms and conditions, and cross referencing it with a handful of other notable small press publishers, I was pleasantly surprised to find their offer to be the most competitive. The most attractive agreement in their contract was the creator’s reserved right to take their project elsewhere if it drummed up interest from another publisher. It certainly wasn’t my intention to cut and run for greener pastures, so I emailed Andrew to discuss this in more detail.

“We provide this stipulation because we understand where we exist within the industry,” he wrote. “As much as we’d love for all our creators to make 215 Ink a permanent home, we’d never expect them to pass up more exposure if they can get it. Ultimately, we just want to provide opportunity for new and upcoming talent, where they can produce their quality books for our readers.”

And with that, I signed my first publishing contract.

What made this most rewarding was discovering that conviction isn’t merely being convinced and/or believing in getting published. 215 Ink’s green light revealed not only their conviction in publishing quality properties, but more importantly the fostering of a family that consisted of creators they believed in. Up until that point, I had stopped believing in myself and had been on the brink of quitting multiple times.

Remembering to believe in yourself might seem like an obvious thing to keep in mind, but with enough rejection letters it can be very easy to forget. Losing sight of this was leading me down a path of negativity that can be difficult to come back from. Let me explain.

Hypothetically speaking: If I had simply focused on the clout of the publisher and passed on 215 Ink’s offer, I would have completely ignored the fact that someone else (no matter how small) was willing to take a chance on me. Furthermore, they were putting me in a position to get my work out there. By reminding me that validation doesn’t only come from the big name publishers, I was also providing the opportunity for an extremely promising artist to have her work shown beyond just my computer screen.

What can be equally as challenging as gaining the interest of a publisher is gaining the commitment from an artist. No real potential for any backend money from a publisher is an understandable deal breaker, so it was vital that 215 Ink won me over. This in turn informed me of the importance in presenting inherent benefits of the publisher to my collaborator, and the great opportunity presented in front of us.

The bottom line is that no creative team should ever forfeit an opportunity that will yield a complete product. I was lucky enough to have an artist on board that believed in our work that went beyond a paycheck or mass recognition. This reciprocated faith we had was what managed our expectations, and kept us from abandoning a project–when completed–that would open doors for us.

Little did I know, someone at Emerald City Comic-Con had paid attention, and a month after the convention, I found a response to a follow-up email I had sent. It was from Skybound Entertainment.