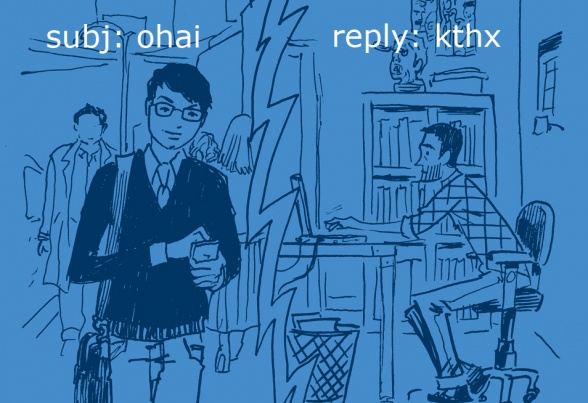 Your pitch has been submitted, and you couldn’t be more confident in the artist, colorist, letterer, and designer. You’ve run a fine-tooth comb through your one page series synopsis for any typos or grammatical errors. If you’ve been fortunate enough to attend a con and show that bad boy around, you might’ve gotten some positive feedback from established creators that only serves to keep your hopes high. Time to sit back, relax, and wait, right? I don’t think so. You’ve only just begun the journey of seeing a project through to completion.

If your instinct is to follow up then I’d say you’ve got the right attitude, but this due diligence is a delicate art form that requires a lot of trial and error before you can gain your footing. Depending on which submission site you read, there is a lot of confusing information out there. As you start to build your network of acquaintances within a publisher’s editorial staff, the information can be downright contradicting.

The most common misconception is to not follow up due to the high traffic of incoming submissions that publishers receive on a daily basis. I would say that this is absolutely true if you’ve sent your baby to a mass submission email. On the other hand, if you have built rapport with an actual person then that’s a completely different story. Following up is absolutely key in helping establish your presence, but done wrong can completely backfire.

So how does one avoid a pie in the face? Three words: Brief. Friendly. Consistent. The first two are fairly straight forward, but it’s the third one that can slip you up. As a rule of thumb, I’d say a monthly follow up is consistent enough to keep you on an editor’s radar, but not pushy enough for them to immediately hit “trash” when they see your name. Again, depending on how well you know someone, this can be adjusted accordingly. My follow up with Sina Grace–former Editorial Director of Skybound Entertainment–occurred only a week after I left him my submissions at Emerald City Comicon. I was comfortable doing this because by that point, I had established an actual friendship with him over the past year or so.

Gonna try and have some news for you this week.  I always appreciate how much you’ve invested in us, and I hope we can work together soon!

Once you have confirmation that serious consideration has been put into your project, it’s entirely up to your discretion on how soon to follow up from a follow up. I have found that waiting a minimum of one work week is a healthy amount of time to keep the ball of progress rolling. A week later I sent out this email.

Just touching base about your email last week. Hope all is well.

You are the KING of friendly follow-up! Your submission is in Robert’s hands.  It’s being passed around. While that information is neither here nor there, I’m just letting you know that the name “Jeremy Holt” is being heard at the offices.

As simple and formulaic as this interaction may appear, it’s important to understand all of the ground work that was laid over the years to facilitate such an exchange. I spent what little money I had left over from my day job to afford trips to conventions in order to get my face in front of the right people. I made an effort to have a minimum of two solid pitches to show prospective editors at each con, and to strengthen my friendship with many of the established talent that I was socializing with.

There are fewer places better than a convention to build your interpersonal skills. In order to greatly improve your pitching techniques, it’s extremely helpful to spend the time to just socialize at a convention. What I like to do when I first hit the convention floor is to orient myself on where people and booths are located. Before I even think about saying hi to editors, I prefer to warm up by stopping by artist alley, and say hi to creators that I know and respect. Over the years, these pop-ins went from cold introductions, to friendly re-introductions, to buddy-to-buddy catch ups.

This different type of follow up benefits you in more ways than one. By doing this, you are demonstrating to the community that you’re someone that they’d like to have around. This is where collaborations are born, and getting their feedback can only strengthen your work. If you can master this, talking to editors is exponentially easier when you know you’ve got established friends that have your back. [Plus, they’re A LOT of fun to drink with.]

Applying these techniques that were successfully advancing my career doesn’t mean that I was expecting this type of reception from Skybound. Believe me when I say getting those emails had my heart pounding through my chest with equal parts adrenaline and excitement.

What was more impressive than the flattering update from Sina was the nugget of insight he imparted on me about how to make my projects even more enticing to publishers.

Hey, pardon me if I already know the answer to this…have you worked on pursuing fully self-publishing any of these concepts?  You’ve got the wherewithal to print professional quality comics…have you thought to just go out there and pursue one of these ideas on your own?

I only ask because you’ve literally got a handful of ideas ready to rumble, and I know what caught our attention with the Witch Doctor guys (and Ed Brisson) is the fact that they took the leap and just put a book out there.

Again, I apologize if you have done this and I forgot, right now all I have on-hand are your sampler books.

Having attended ImageExpo a month earlier, it became quite clear to me that Image Comics was shifting their focus towards more established talent thanks to their increasing success. The few titles they announced that were attached to no names were projects that found success within the small press and self-publishing circuits.

I continued to follow up once a week and made sure to emphasize a friendly demeanor with him.

Just touching base with you. I hope my last couple emails haven’t had a negative effect on the project with Skybound. Hope this finds you well.

Before I share his reply to this, I think it’s important to notice my apology that was included in my follow up. I make reference to this because two additional emails were sent on my behalf that I never heard back from. Even though I was following up once a week, I felt like I was possibly overstepping my bounds with my scheduled emails. It never hurts to apologize even if you aren’t clear if you’ve done anything wrong. Again, being friendly and amiable is crucial.

It eventually paid off when only a month after ECCC had passed, he had a final answer for me.

No negative impact at all!  It helped light some respective fires. The project is a Pass here. Cobble Hill is a great idea, but it didn’t feel like a fit for us.

That being said, I still want to see everything you do, because I have faith in your hard work, and I know that regardless of where our communications go, you will be widely recognized in this industry.

As disappointed as I was to hear that answer, I couldn’t help but feel a small amount of accomplishment for getting my work passed around the offices of one of the premiere independent publishers in the industry. I was also reminded of how important following up can be, and thought about all of the wisdom that several editors had imparted on me because of them.

If you’ve made the effort to meet prospective editorial staffs, and they like you enough to share their email with you, I believe you’re entitled to follow up in a more personal manner. I’ve had enough false starts to know when a true connection has been established, and some of those editors have become more than just a stepping stone in my career path. Outside of publication, they’re support and genuine belief in my work has taught me that friendship in this industry is a priceless commodity that keeps the creative market alive and well.