We’ve reached the next crossover in this big re-read, and let me tell you…I already forgot half of what I read, and I read some of it earlier today. Today’s snoozefest is called “Genesis” and, like “The Final Night,” it was a month-long event that saw most DC books play along, though also like “The Final Night,” you really didn’t need to read any of the tie-ins. 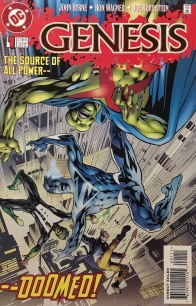 Somehow, certain heroes start to lose their powers, while others are unaffected or find their abilities augmented in ‘Resonance.’

There is an idea tossed out in this book that isn’t terrible: 40,000 years ago, a ‘godwave’ hit Earth, and that caused the creation of people we called gods. The same wave hit 1,000 years ago, creating demigods and, eventually, metahumans. This is as good a reason as any for heroes to exist, and it ties in lots of good DC shit like the Source Wall and Fourth World, so in principle, I’m in for this.

What wasn’t so good was how the event was executed, which to say was poor is being generous to John Byrne. The ‘godwave’ is coming back, and will wipe us all out, but beforehand a melancholy hits Earth, which also affects the powers of some superheroes. This leads to some depressing stuff, like mass suicides, but also gives Bynre an excuse to write everyone as a sad sack without the time to make them interesting at all.

For instance, a trio of Gotham based vigilantes – Robin (Tim Drake), Huntress, and Catwoman – have multiple scenes of them basically just going “how can we help these people? We are just as bad off as they are. But we can’t give up!” It’s paper thin and full of platitudes and doesn’t delve into what would happen if a hero was truly shaken to the point of apathy. That would be an interesting story; this is not so much.

But this event happened at a very specific era of DC, and it’s fun to revisit that era briefly. Remember when Superman was an energy creature that wore a blue containment suit? He’s here! Remember when Wonder Woman was in a coma? Well, that’s why she isn’t a part of this! Remember when Ray Palmer was de-aged to 16 and led the Teen Titans? Yarp!

As I mentioned earlier, the tie-ins are pretty weakly tied in, or feature slightly different angles on the action. But because of that, a quick skim through the tie-ins is plenty, and also gives a pretty accurate representation of how the books were at this time. So, that means that “Starman” is excellent and made me cry, and “Green Lantern” had some nice Kyle and John stuff, and “Superboy and the Ravers” was incomprehensible, and “Superman” was still trapped by Dan Jurgens’s dialogue: 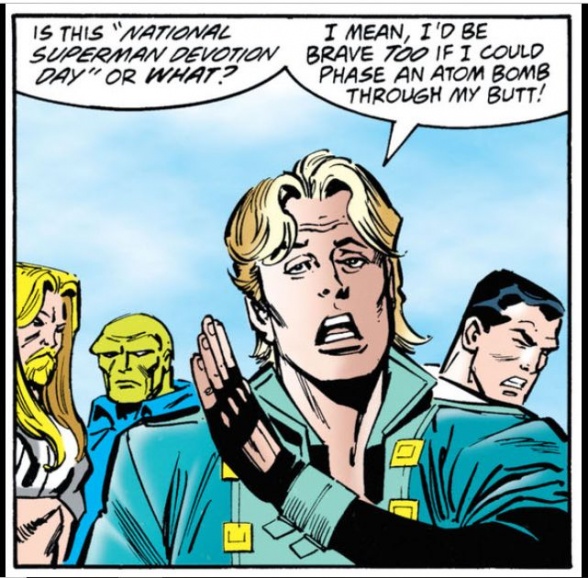 But reading some tie-ins also allowed me to remember that [Christopher] Priest wrote a Steel run that I want to go back and read, or how Louise Simonson really wrote the last Superman book to have a true extended cast. This was an overall good time for DC, but of course there was some weirdness floating about, too. That’s why reading these events has been such a fun part of the read through.

The only real thing to seems to have happened in this event was the death of Highfather, which was obviously retconned at some point, along with a lot of the pieces of this event. I’m sure that for folks who were reading the Bynre-penned and illustrated “Jack Kirby’s Fourth World” series were more invested in that moment than I was, but it didn’t feel as eventful as it should have. He’s the fucking Highfather, and yet he was somehow only a minor piece of this.

I suppose I should actually talk about the reason for the read through, huh? This is the fifth or so crossover since “Crisis on Infinite Earths” to feature Captain Marvel on most of their covers, only to have him be a minor piece of the crossover itself. I sound like a broken record but, again, like “The Final Night,” the “Power of Shazam” tie-in issue was one of the better ones, and felt less tangential than, say, “Starman,” which had approximately 2 panels of tie-in stuff.

But this event did have a few moments of Shazam-realness in it. The first is that Mary gets the most screentime she’s had outside of “The Power of Shazam” since before “Crisis on Infinite Earths.” It also, I believe also for the first time, introduces the wizard Shazam to folks like Superman. This is the second time, sigh, again after “The Final Night,” that Captain Marvel is a firmly established piece of the DC landscape, and not a random hanger on or ‘new guy’ on the block.

– Ron Wagner’s art, apparently, wasn’t very well received for this, but I thought he did a nice job. He’s not traditionally a DC superhero guy, which makes it fun to see his interpretations of all these characters.

– The Source Wall gets ‘destroyed’ here, some 20ish years before Scott Snyder destroyed it all again.

– Darkseid is a factor in here, but is presented in a relatively dull fashion here. He’s not compelling at all, which is about the worst thing I can say about a character.

– “Superboy and the Ravers” is second only to “Sovereign Seven” as forgotten books of this era. Also, the first run of “Resurrection Man” is part of this crossover!