The DC3 decided to take on the Herculean task of covering DC’s weekly books! Our coverage will rotate between creator interviews, issue reviews and annotations, and long-form pieces on featured characters. This, friends, is the DC3kly! 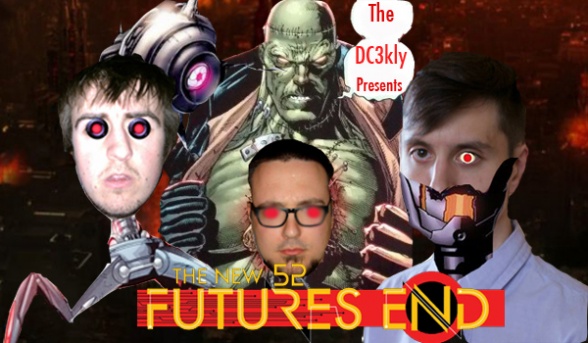 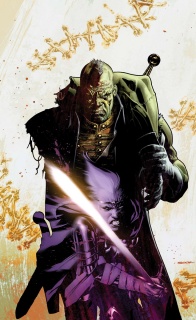 On the Cover: I mentioned last week how the covers for “Batman Eternal” were failing to live up to Sook’s work on this book, and this issue is a perfect example of that. Here, Frankenstein stands stoically with detached arm trapped over his shoulder, while Amethyst brandishes a glowing blade in the shadowy space cast upon Frank. While Frankenstein doesn’t actually lose his whole arm in this issue, we have seen, as Brian pointed out in issue #0, that at some point Frank come into the market for new appendages. Is this an artistic exaggeration of the story inside, or a foreshadowing of things to come?

How is the Story Progressing?: “Futures End” #4 ties multiple threads from previous issues together, while also expanding on others and introducing a new group of characters. First up, we see the continuation of the Frankenstein thread from last issue. Frank catches back up with S.H.A.D.E. after years of self-imposed exile, only to find that the “shady” organizations has a new top agent, one who is just as handy with a sword. That agent would be Amethyst of Gemworld, once again drawn by Aaron Lopresti, but with a heavily scarred visage. The duo is teamed and tasked by Father Time to track down Stormwatch, who were seemingly killed in issue #1.

The issue also catches up with the newly revealed to be living Tim Drake. Through a fairly heavy exposition heavy conversation with his girlfriend Madison Payne, we find that Drake now lives as Cal Corcoran, and that he harbors some pretty sore feelings from Batman.

Finally, we have the continued adventures of Cole Cash, in what is quite possibly the least interesting part of “Futures End” thus far. While out chasing wretched scum and villainy, Grifter runs into King Faraday, who was previously revealed to be tailing Grifter in the previous issue. Faraday appears, shoots Grifter in the spine, then leaves him with an ultimatum, closing the issue with a rather abrupt cliffhanger.

New 52 Debuts: If I’m not mistaken, this issue marks the debut of both The Key and this new Coil, who may or may not be affiliated with an old “Dial H for Hero” villain with the ability to compress his body like a spring. The Key is arguably most famous for his appearance in an early arc of Grant Morrison’s “JLA.”

Death Toll: Grifter kills a lot of aliens, and Frankenstein loses a hand.

Visuals: Aaron Lopresti’s pencils, inked by Art Thibert, feel less smooth and defined than they last did in “Sword of Sorcery.” The result is a look that is less aesthetically pleasing, but very much in line with the house style that seems to be developing in “Futures End.”

Three Big Questions: This issue raised more than just three questions for me, but here are the ones that stuck out the most:

1. What happened to Amethyst’s face?

Sure, post-apocalyptic futures and gruesome facial disfiguration go hand in hand, but just what’s going on with Amethyst’s face? The easy guess is that it’s a wound from the Earth War, but perhaps it isn’t that simple. It may be a small point, but such a striking visual change to a character bears contemplation.

We haven’t seen much of Palmer in the New 52, outside of some appearances in Jeff Lemire and Alberto Ponticelli’s “Frankenstein” series, and more recently in a Lemire penned issue of “Batman/Superman.” In the latter, we actually witnessed Palmer don his “Atom” attire, which he is also wearing here. The costume is accented by a lab coat, John Lennon glasses, and a rather disheveled beard. The man appears to have already bypassed his hero stage, devolving into eccentric scientist, pontificating extra galactic travel through the Phantom Zone. Just as with Amethyst and other characters, we’re left to wonder what effect the five years has had on Ray. 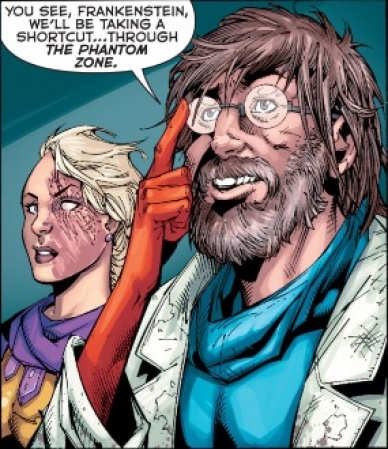 3. Is it coincidence that Tim Drake is dating the daughter of a war criminal?

It’s revealed that Tim’s girlfriend, a Madison Payne, is the daughter of an imprisoned war criminal, a “war profiteer” accused of betraying Earth Prime. One has to wonder if such a pairing is coincidence, or if Tim has an ulterior motive for staying close to Ms. Payne. 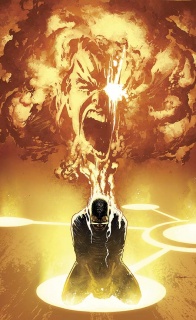 On the Cover: Jason Rusch sits in the midst of a glowing Firestorm logo, as a fiery mushroom cloud erupts from his hunched shoulders. Within the plume, we see what appears to be Ronnie Raymond in agonizing pain.

How is the Story Progressing?: Bucking the “four segments per issue” formula, this issue checks in on Mr. Terrific, Grifter/Faraday, and Firestorm, while introducing Fury, the daughter of Earth 2 Wonder Woman, and John Constantine into the fray

Kicking the issue off, we essentially get Steve Jobs introducing the iPad for the first time, in the guise of Mr. Terrific introducing the revolutionary uSphere. Billed as the “back-up for your brain,” this in no way seems like the inciting incident that sees the world’s population subjugated and converted to cyborgs by a machine overlord. Not at all.

Picking up from last issue’s ending, Faraday makes Grifter an offer to heal him and keep his murderous tendencies a secret, if he is willing to enter into his service. Said service involves hanging out on an island with a creepy girl with laser eyes (more on that later).

Now, when you think of island, and you consider Jeff Lemire is a writer on the book, the mind instantly jumps to Oliver Queen’s island. However, the more likely tropical getaway that Grifter has landed is more than likely Cadmus Island, a delightful resort for the captured inhabitants of Earth 2. Here, we find Fury being pursued by O.M.A.C. units, marking the first time that we have seen a non-Kevin Kho O.M.A.C. in the New 52. Though Fury takes out the O.M.A.C.s with ease, she’s confronted by Faraday’s creepy girl and quickly incapacitated.

After weeks of being a completely unbearable and repulsive human being, Ronnie Raymond finally releases Jason Rusch from the Firestorm matrix. Jason is rightfully a little irate at Ronnie, leading to a brief spat that ends their partnership. The Firestorm story is over now, right?

Finally, the issue ends with a rather odd segment featuring John Constantine, a duo of seemingly new characters, and a crop circle in Kansas that drains the life of everything on it.

New 52 Debuts: No obvious characters make their “New 52” debut in this issue, but John Constantine and Fury make their entry into the series.

Death Toll: Molly Hutchins, an employee of Cadmus, apparently dies off panel so that Fury can make her escape. Alas, her death was in vain. In a more figurative sense, we have the “death” of Firestorm, in a moment that screams “Spider-Man no more!” 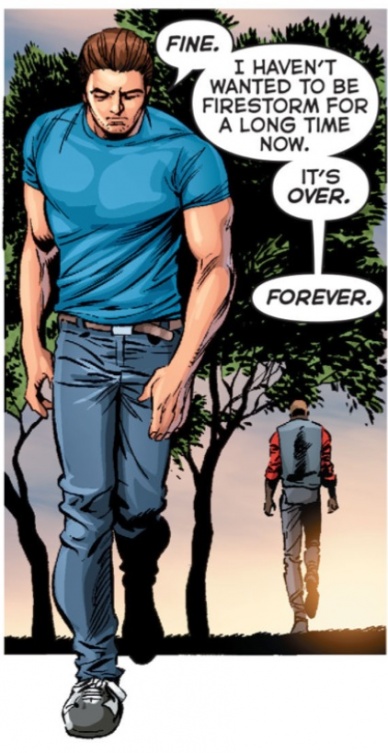 Visuals: As mentioned for issue #4, there’s a distinct style that the artists of “Futures End” appear to be following, and Jesus Merino’s work continues to play to that. At this point, I doubt that I could look at any particular issue of “Futures End” and tell you who the artist it, with Patrick Zircher’s work being the exception. I’m not yet sure if that uniformity is a boon or a detriment to “Futures End.” The art hasn’t been bad by any means, but it also fails to stand out in a way that, say, Ryan Sook’s covers do. Now, comparing covers to interiors is never a 1:1 to comparison, especially when someone like Ryan Sook is involved, but by trying to keep a uniform style, the artists run the risk of losing the things that make their individual works special. That is, of course, the dilemma seen across the New 52 as a whole, but that’s another discussion.

In the pages of “Earth 2,” James Robinson revealed that Fury was the secret daughter of Wonder Woman. The character has not been seen since Robinson’s departure from the series, until now, where it is inferred by Faraday’s mysterious girl (I’m getting there, I promise) that Fury is half Apokoliptian. This is a pretty major development for a character that has been on the back burner for nearly a year. The possibility that the Earth 2 Wonder Woman had a secret fling with an Apokoliptian definitely has pretty interesting implications

Finally, just who is that creepy little girl? In the scene with Grifter, she appears and disappears from the doorway between panels, suggesting some kind of super speed or teleportation powers. Later, she shows up on Cadmus Island to confront Fury, whom she subdues with an optical energy blast. That combination of powers suggests a Kryptonian background. Could this be the evil Superman/Wonder Woman offspring that’s been hinted at? It seems extremely unlikely, but who even knows at this point?

The issue ends with a wide shot of what Constantine describes as “killing fields,” but what looks more like good old crop circles. While the design is initially reminiscent of the Firestorm logo, it is actually a spot on match for Brainiac’s iconic symbol. While the “killing fields” are extremely ancient and seem to have a more mystical bent, is it possible the cataloguer of worlds has a hand in their design. A Constantine/Brainiac showdown is one I never thought I’d see, but it’s a prospect I could probably get behind. 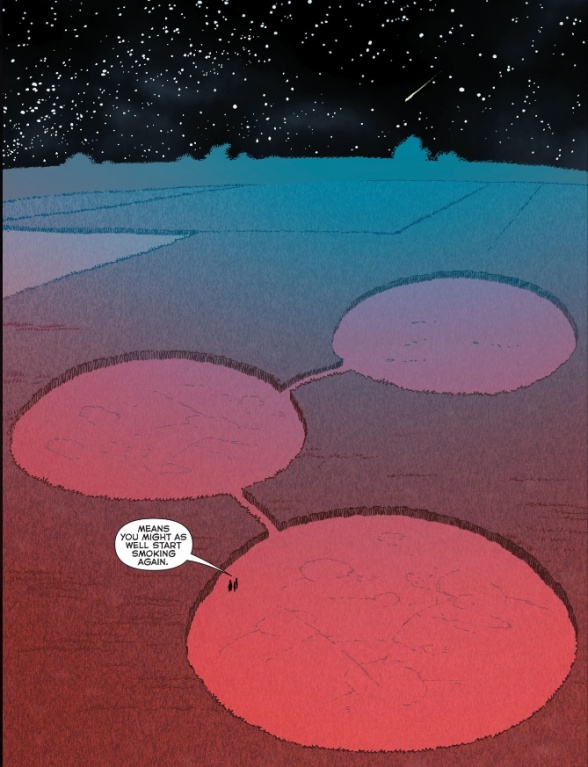 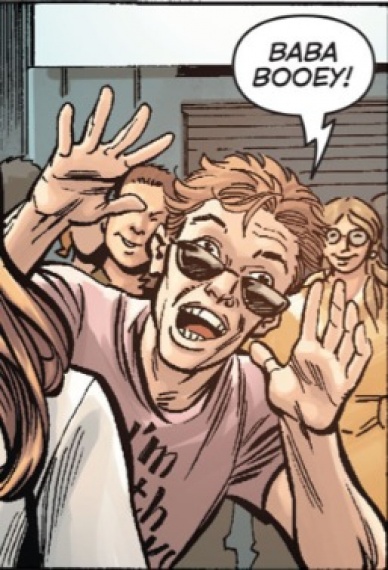 “Futures End” still feels a little uneven at times, and some story-lines, particularly the Grifter and Firestorm segments, are already starting to wear a bit thin. However, these two issues introduce a number of interesting DC characters and concepts to the series, keeping the sense of wonder and mystery high. The number of unanswered questions continues to rise, which at only one month in isn’t a huge problem. However, at the rate the series seems to be expanding, it would be wise to start closing a few doors as new ones are opened. Otherwise, the series runs the risk of collapsing under its own weight. Even for its flaws, “Futures End” remains an enjoyable read, and a unique part of the New 52.

While all of us at Multiversity are fans of a wide spectrum of comics, there are a few of us that tend to self-identify as “DC guys.” We’ve cried for justice; we’ve been through the blackest nights and the brightest days. And now, we’ve been culled together for a new column to focus on some […]

The DC3 Presents: The Convergents, Week Eight: The Shocking Conclusion!

By Brian Salvatore, Vince Ostrowski and Zach Wilkerson | May 29, 2015 | Reviews

We at the DC3 have been through a lot together – we’ve seen villains take over our beloved books, we read a month’s worth of “Five Years Later” stories, and we’ve tackled a year of weekly titles, and we’ve come through it all stronger. But here we are, at our most challenging time as a […]

By Brian Salvatore, Vince Ostrowski and Zach Wilkerson | May 25, 2015 | Columns

While all of us at Multiversity are fans of a wide spectrum of comics, there are a few of us that tend to self-identify as “DC guys.” We’ve cried for justice; we’ve been through the blackest nights and the brightest days. And now, we’ve been culled together for a new column to focus on some […]