In case you missed our most recent episode (Episode 79: Tiny Elvis with Andy Suriano), we had a blast talking about all things Plastic Man, in honor of Andy working on the Cartoon Network Plastic Man shorts. Chad had us pitch him a soundtrack to a Plastic Man live-action film. Tracks 1, 4, and 7 are Matt’s choices, 2, 5, and 8 are Brian’s, and 3, 6, and 9 are Andy’s. We hope you enjoy it!

You should also check out one of the Plastic Man shorts Andy worked on for Cartoon Network. Andy talks about this episode on the show:

For all of our listeners/readers under 30, here is the opening segment, as well as some additional footage from The Plastic Man Comedy Adventure Show that we briefly mentioned, and which Brian remembered as potentially featuring an actress playing Plastic Man. It is now clear that is a man, but you could see how a 4 year old could be confused.

The episode got its title from Andy having a prior career as a “2 foot tall Elvis,” as well as Chad and Brian having affinity for bad early 90s Saturday Night Live sketches. It won’t let me embed it (probably because this website is huuuuuuge, man), but watch “Tiny Elvis” starring a post-Wild at Heart Nicolas Cage. 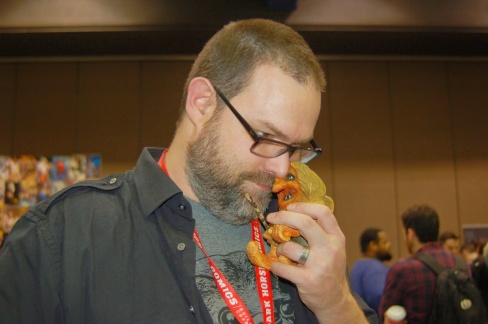 Tonight, the great Mike Norton joins the show to attempt to win The Hour Cosmic! You may know Mike from “Revival” from Image Comics, or the great “Battlepug.” Make sure to follow @TheHourCosmic, and make sure to retweet this tweet for a chance for Mike to play on your behalf!

Thanks again for checking out the show, and tune in on Monday to see how Mike does!