The first year of “The Power of Shazam” is a long set up to get to the ‘new’ Captain Marvel status quo, which involves setting up the immediate and extended Marvel family, giving some explanation for certain aspects of the story, and provide a plan going forward. These first twelve issues do all of that, mostly well. This gets the Chronicles of Shazam to a place where I won’t have to big digging around for too many Cap stories to talk about – at least for a little while. 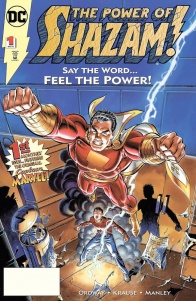 Even as Captain Marvel contends with the machinations of an urban terrorist, young Billy Batson begins to feel the awesome burden of responsibility in being the World’s Mightiest Mortal. Meanwhile, corruption from the outside world worms its way into Fawcett City.

Jerry Ordway sticks around from the graphic novel, providing the script and covers for the series, turning art duties over to Peter Krause, Mike Manley, and Glen Whitmore, and generally sets about trying to find a balance between a stand alone story and a place in the greater DCU. There is nothing from the OGN that is negated or undone in these first twelve issues, and there’s a fair amount of work done to bring this book into the mainline continuity without just throwing away what Ordway did in the past.

The first major bit of that regards Fawcett City itself. As I mentioned last week, the city has a tone that is far more 1945 than 1995. We see it in the architecture, the attitude of the citizens, and even in the looks of people. There’s a really fun bit from #8 (illustrated by the great Curt Swan) where we get a throwback tale to World War II, with Bulletman, Minute-Man and Spy Smasher taking down Captain Nazi. In the present day scene, it is remarked how Bulletman looks so good for his age, and he attributes it to Fawcett just keeping him young.

Well, it turns out that wizard Shazam had cast a spell over Fawcett, a place he loved, to both keep evil from it, but also to slow the passage of time. So, while it may look anachronistic, it is still very much in the present. While this is a bit of a weird explanation, it is also a weirdly humanizing moment for Shazam, a character who, frankly, has never really been anything other than an almost literal deus ex machina.

Peter Krause does not try to mimic Ordway’s painted style here, and that’s good, but he does more or less stick to the stylings that Ordway set up in the graphic novel. Everything is a little less cinematic and grand than what Ordway does, but that also helps the root the story in the DCU. Krause does a nice job blending the staid, in the 40s feel with what was expected of comics in the 90s. Aside from Mary’s hair, there is almost nothing visually dated in the book for that exact reason. Krause is the main artist on this title, illustrating 30+ issues of the run, and he’s a great fit for the title and the character.

Krause also gets to illustrate a pretty wide variety of characters and locales here, from the Netherworlds (essentially Hell) and its demonic creatures to Shazam’s lair to palatial estates and city streets. Manley and Whitemore help with this quite a bit; they help differentiate Fawcett from the other locations through, in Manley’s case, a heavier line and, in Whitemore’s case, more monochromatic/bold use of colors. These aren’t necessarily choices that grab you by the collar and reveal themselves, but rather subtle choices that benefit the story quite ab it.

There are a few things that Ordway does that seem like ways to placate longtime fans without getting into time travel shenanigans or messing with continuity. The first is by bringing Captain Nazi back in a way that totally disregards the “Action Comics Weekly” series gives the book an instant connection to the Fawcett roots and can introduce other Fawcett characters like Bulletman in an organic way.

Ordway also finds odd, though ostensibly effective, ways to bring Dudley and Tawky Tawny into the Marvel family, but really shines with his handling of Freddie Freeman. Freddie’s original origin isn’t messed with too much, again revealing that he must say “Captain Marvel” to transform into Captain Marvel Jr, along with a plausible reason why he still appears young post-transformation. The character is also written more harsh and immature than Billy or Mary, which gives him a bit of personality where it would’ve been easy to just make him a Billy clone.

All three Marvels have to share their powers, which means whenever only one is powered up, they are most effective. This gets somewhat retconned at the end of the arc, where they are granted additional powers by Ibis now using his magic, instead of Shazam’s, to keep the ‘seven deadly enemies of man’ in their stasis (more on Ibis in a minute).

These twelve issues introduce a number of regular rogues for the Marvels, including Black Adam, Captain Nazi, and Madame Libertine. We also get more with Billy’s evil uncle Ebenezer, we meet an undercover cop/pal of Cap’s, “Muscles” McGinnis, and the aforementioned Ibis, a seemingly immortal Egyptian who helps save the day. He also agrees to temporarily guard the Rock of Eternity while Shazam goes on sabbatical to ‘better know’ the people of Earth. Sounds like someone is running for president!

When I’m reviewing these large chunks of stories, I’ll have a “Stray Observations” section, stolen from the A.V. Club, where I can share some smaller thoughts.

– I appreciate how it is very clear that Mary is the better Captain Marvel. She is more in tune with her powers, is less impulsive, and more compassionate. I like the dynamic this is setting up for the Marvel family.

– This book promises Nazis, and Nazis we get. These aren’t “good people on both sides” Nazis, either. We get some truly evil shit said by some truly evil people. It is amazing that Nazis would be handled more softly in 2019, but that’s the fucked up world we live in.

– Wait, how is “War of the Gods” canon? There is both an in-dialogue reference to the story, as well as an editorial note about it, but it makes no sense how Black Adam could have been a part of it, as he didn’t do that stuff before his origin in the OGN, and he’s rendered mute at the end of that, and not granted his voice back until here. I know this is nitpicking, but it seemed like such an easy thing to avoid, and yet, here we are.

– Did y’all know that Shazam has kids named Satanis and Blaze that he had with a demon of some sort? Well, you do now!

– Black Adam is the worst handled character thus far, as he still doesn’t seem like the same character we’ve seen before. First of all, he’s much skinnier than we’ve seen before and since; he’s usually as large as Superman or Captain marvel. But more than that, a few times in these issues he was talking like Steve Martin in My Blue Heaven. I believe at one point he calls Mary ‘babe’ or some similar term. What the fuck? At the end of the story, he is sent to a ‘faraway star,’ hopefully to get tuned up by the retcon police.

– That said, this is the first time post-Crisis that we’ve seen Black Adam do something because it is the ‘right’ thing to do, leading into his eventual emergence as an anti-hero in “JSA” five or so years later.