Best Issue: “Batman and the Outsiders” #1 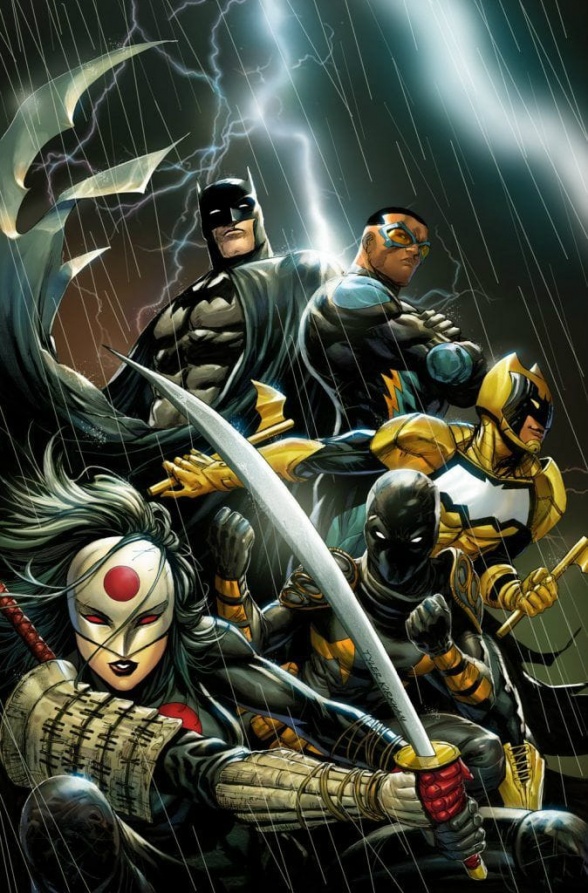 Did it take a lot longer than anyone expected for a new Outsiders book to finally come out? Yes. After delays to position “Outsiders” to be more tied into the events of the DC Universe, Year of the Villian, the Bryan Hill, Dexter Soy, Veronica Gandini finally came out and delivered a stellar opening issue. Reading Hill’s prequel ‘On the Outside’ from the pages of “Detective Comics” wouldn’t be a bad thing, but you don’t really have to as he deftly weaves together and explores our quartet of characters emotional baggage. By giving everyone enough space the book already feels like a team book as their personal issues are triangulated with a distrust of Batman and whatever game he is really playing.

It is plainly nice to see Dexter Soy and Veronica Gandini back together on art duties after a stellar run on the Rebirth era “Red Hood and the Outlaws.” Together they get to draw cyborgs and multiple X-Men analogs as the Outsiders are on the hunt for a missing girl. While they may feel like outcasts more so than Outsiders, the search for Sofia Ramos has a very basic heroic and human core to it that is surprisingly effective.

“Batman and the Outsiders” #1 does everything you’d want a first issue to do. 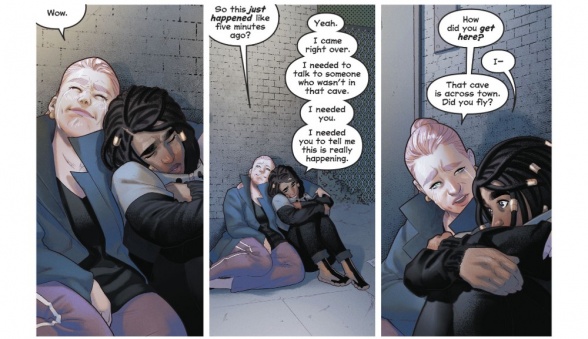 Jamal Campbell’s work in “Naomi” has been excellent for the past four issues, but it’s his work in the fifth issue that sees him do it all and really flex. How else could you describe a set of five double page spreads that retell the Crisis on Naomi’s original home Earth and the coming of superheroes and villains. Those maybe the showiest moments of the issue, however, it is the smaller interpersonal stuff between Naomi and Ana and the pure sense of joy on their faces as all of this unfolds that really sells everything.

“Peter Cannon: Thunderbolt” has felt like the anti-“Doomsday Clock,” as writer Kieron Gillen deconstructs the deconstructionism in the wake of “Watchmen.” The series finale finishes that thought after an odyssey through various formalist setups found in this medium. And for all the reflexivity found in this issue, and series as a whole, it never loses sight of the humanity of its characters – something that most people seem to forget about “Watchmen.” The defeat of evil Peter Cannon isn’t triumphant, it’s tragic. Gillen again proves himself to be one of the mediums best writers at shaping tales about the medium they are about while still being fundamentally good narratives by themselves.

Best This is Your Life: Naomi Learns the Truth, “Naomi” #5 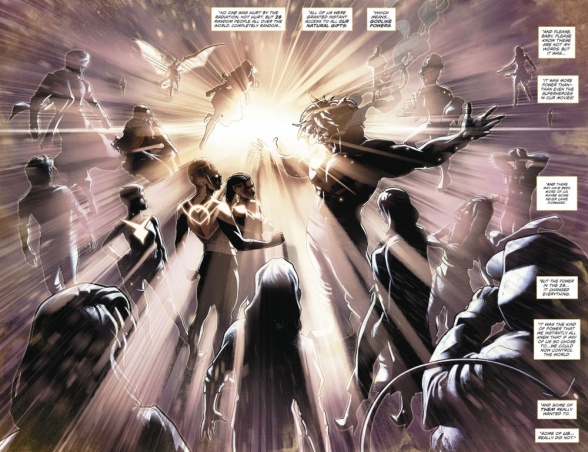 Using five double page spreads back to back is indulgent in ways you’d only expect from a 90s throwback comic. Yet artist Jamal Campbell makes it work by turning these spreads into the mythic origin of Naomi’s Earth and the outcome of a Crisis. While Bendis and David Walker’s script certainly adds some depth, you don’t really need them as Campbell slowly turns out a spin on the foundational myth in the DC Universe and Naomi learns the truth. 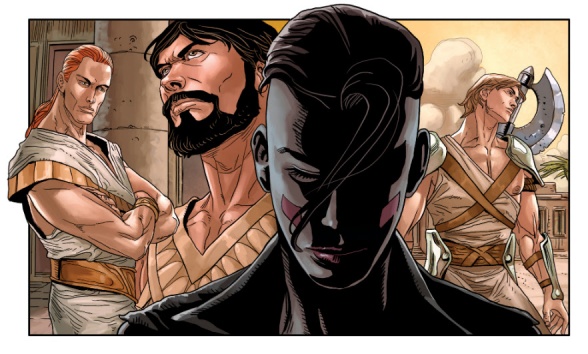 Coming in right at the end of the month in “The Forgotten Queen” #4 is a plainly good retcon that adds to the Valiant Universe, and is a reminder that these books are all dressed up family dramas at their core. Tini Howard and Amilcar Pinna’s villainess miniseries repositions Vexana as something closer to an anti-hero and gives the former “Unity” antagonist much needed shape and depth. Like any good retcon it recharacterizes her centuries long conflict with the Eternal Warrior and makes them better. All Vexana has wanted is companionship and with this newfound knowledge she realizes she might actually find some in her long forgotten brothers. The retcon leads to the emotional catharsis of the entire series and that makes it one of the best retcons of the month.

Best Use of Onomatopoeia: “Pearl” #9

Pear is really going places and learning many things about her Mom, the Ghost Boss of the Yakuza. With this new information comes choices, graphic choices, graphically illustrated by artist Michael Gaydos.

This Month in Comics: January 2020

January is an annoying time in popular culture. The New Year has begun, everyone is still working through the post Christmas holiday cheer/hangover, and there really aren’t a whole lot of big conventions and opportunities for big announcements. The truth is that the people who make decisions in the entertainment industry tend to think that […]

This Month in Comics: November 2019

Ah, November. As Americans make their last turkey sandwiches for lunch and everyone looks down the barrel of the last month of the decade, we must think about the finer things in life. Comics. November brought us a number of things regarding that four-color medium. New Graphic Novels, new debuts, “New Mutants”…maybe we should call […]