This week, Robbie and Ken check in on “Chainsaw Man” and “My Hero Academia: Vigilantes” If you have thoughts on these, or any other current Shonen Jump titles, please let us know in the comments!

“My Hero Academia”’s little sister series, “Vigilantes,” has been churning off to the side providing a smaller scale story in comparison to the much grander and sweeping tale Kohei Horikoshi has been telling. It’s sometimes hard to remember that the vigilantes of Naruhata are out there. Chapter 45 is a very low key addition to the series, focused a lot more on character moments then big time action going on elsewhere. While the chapter does feel like it had an odd pacing to it, nonetheless, it’s still a nice welcome back after the holiday break.

The central moments in this chapter focus around the reunion of Knuckle Duster and his daughter Tamao, formerly the possessed villain Kuin. Even with her making progress in her recovery, there is still a layer of tension between the two. They are both pretty curt with one another, even with Knuckle Duster trying to do his best, even when duty calls. Beside them, Soga has his own little moment. The bristly (get it? Because spikes) young man is on protection detail but even a small a moment as him tuning a guitar for Tamao to play chips away at the rough exterior around him, even if he is quick to bring it back up when others make note of it.

As discussed previously, there isn’t a massive amount of action this chapter, but Betten Court still provides some good work. His art is a bit sharper than Horikoshi’s, making people a bit angular, but it serves well the moments of dynamism, particularly in the second half of the chapter where it gets more plot focused when Knuckle Duster is out looking for information. Finally, there is a hilarious moment with Crawler fighting a -I kid you not- Thomas the Tank Engine-themed villain. As in the head of this villain shaped like a bizzare(er) Thomas engine. It’s just as weird as it sounds.

While the chapter wasn’t anything groundbreaking for the series as a whole, Chapter 45 of “Vigilantes” makes up for it with some smaller beats of development. It does feel like it ends right out of nowhere, but for what we get, it’s a nice return before it begins to heat back up again.

Final Verdict– 6.0- A quieter chapter with some good moments of character development. 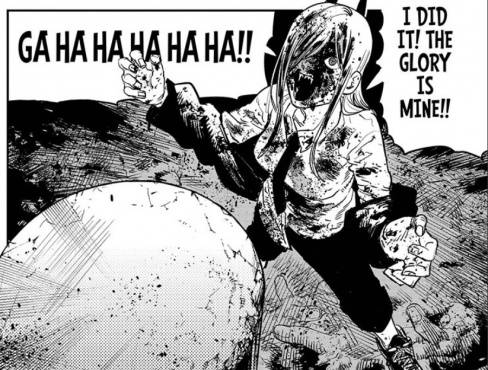 One thing I must say about “Chainsaw Man:” it helps you appreciate the little things in life. When Denji, the protagonist, talks about being able to do things like drink soda or eat bread as “a dream come true,” it puts things in perspective. But a series needs more than just that to really stand out.

While previous chapters gave us some decent action and combat against devils, this one is more focused on the characters – frankly, that’s just fine. We were just introduced to Power, a fiend with the powers of a blood devil, so we get to see how she and Denji work together.

After a little chaos and arguing, there’s even a little character work where we’re told about her personality and drives. Frankly, knowing that she’s motivated by the hopes of finding a cat that was taken by a devil makes Power a more relatable character; anyone who’s ever loved a pet would probably do the same.

Although the way her dialogue is written makes her occasionally sound like Gollum. Lines like “Humans tell nasty lies! I only did as I was told, ’tis truth!” read a bit oddly, and it doesn’t give her quite the right voice. Her blood-manipulating powers aren’t exactly the most original, but the way it took the form of a giant hammer to quickly crush a sea cucumber demon was a good use of it.

On the other hand, “Chainsaw Man” continues to hammer in that Denji’s current goal and motivation is… to touch boobs. Any, in fact, he’s not picky. And look, I get it, that is absolutely something guys are into, but you can’t base a character’s entire driving inspiration around boobs alone. That’s usually used for the comedically perverted side character (AKA The Mineta), not a protagonist, and there’s more to women than their chests.

Although it did give an amusing gag where Denji’s entire stance on the stolen cat quest shifts just for the chance of touching breasts. Hopefully his character will develop more down the line and he’ll have something else to fight for.

Tatsuki Fujimoto’s artwork is pretty standard shonen fare, but it has some good moments. The characters are designed with nice little details and touches to make them unique, like the crosshair shapes of Power’s eyes and the way Denji’s teeth are sharp fangs. It’s well-suited for action, as the panels get sharp and well-spread when the characters rush to battle, and the manga seems to relish the bloodier moments – a full page is dedicated to a blood-splattered Power shouting in victory.

Credit must also be given to a hilariously-delivered two-page spread with a devil hunter in a phone booth. The way the pages feature the shot in mid-conversation, one with the sea cucumber devil crawling through the scene, the other with Power splattering it in a second. It’s a great delivery.

Overall, “Chainsaw Man” has yet to do something to really stand out from the typical “young man gets powers to fight monsters” trope, but it’s fine for what it is. The character work is decent, but there’s certainly room to improve, and there are some noteworthy moments of art.

Final Verdict: 6.2 – A chapter that has its moments, both for characters and art, but still rough around the edges and in need of fine-tuning.