This week, Brandon and Kerry check in with “Chainsaw Man” and “Boys Over Flowers.” If you have thoughts on these, or any other current Shonen Jump titles, please let us know in the comments! 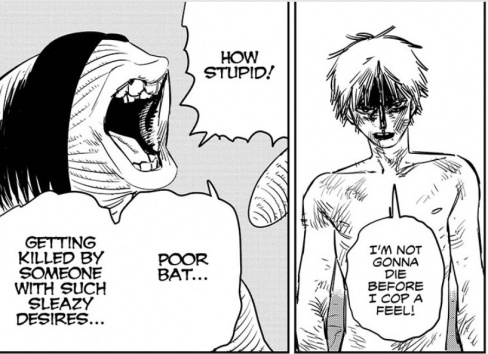 This week, we see the conclusion of Denji’s battle with Batty’s girlfriend, the leech devil. Denji’s quest to touch his partner Power’s breasts by saving her cat ends with a poorly constructed but action-packed chapter.

When “Chainsaw Man” first launched, I was a big fan. But lately, my interest in the title has been slipping, and this chapter is a perfect example of why. Fujimoto’s sketchy style was an initial draw, but here, it just looks messy. Throughout multiple panels of Denji’s fight with the leech devil, all that can really be discerned is that someone is getting hit. There a lot of action lines and sound effects, but the view is so constrained and tight on (mostly) Denji’s face that the actual excitement gets lost in translation. Fujimoto’s character designs are interesting, but we so rarely see full body shots in this chapter that it doesn’t really matter.

This chapter’s story is par for the course for “Chainsaw Man.” After Denji failed to fully transform in the last chapter, he decides that he’s still going fight the devil and promptly get knocked around like a rag-doll. Then, in a truly defining character moment, he exclaims that because his dream (“touching boobs”) is bigger than anyone else’s dream, he will come out victorious.

And therein lies the essence of my conflicted feeling towards this series. His drive to touch a breast is both goofy and sincere, but everything else about this comic is very serious. If this series had more levity and fun, then the “boob” angle would fit right in. But, as it stands, it feels very jarring and out of place in an otherwise action/horror comic. To stop in the middle of a full-on battle just to have to protagonist say that he will win because he really, really wants to touch boobs undercuts all the drama and tension.

Of course, he doesn’t really win the battle. After being impaled by the leech devil, Denji is narrowly rescued by the sudden appearance of Aki Hayakawa and a large wolf-like devil. Bloodied and beaten, Denji screams in agony, probably more because he won’t get to “cop a feel” than the fact that he was recently impaled through the abdomen.

“Chainsaw Man” has a lot of potential, but its lack of commitment to a specific tone ultimately leads to its own demise. Fujimoto’s art in this chapter is congested and confusing, and his characters are slowly revealing themselves as boring and one-dimensional.

Final Rating: 5.5 – The story is moving along, but its sub-par art and tonal dissonance drag the whole book down. 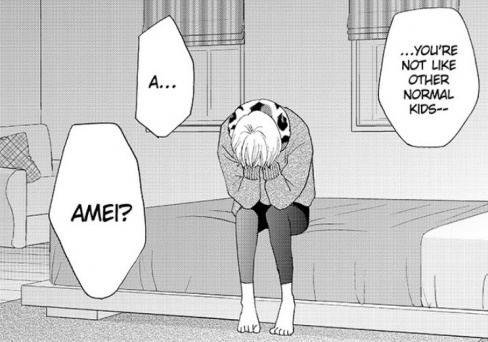 What would a good high school manga be without a few love triangles here and there? Chapter 90 of “Boys Over Flowers Season 2” sets the stage for just that, pitting Oto and Amei against one another as they vie for Haruto’s affections. Though the two have no direct interaction with one another, their status as romantic rivals is apparent throughout.

Yoko Kamio starts the chapter setting up a dichotomy between the two girls by having them both argue with their mothers over, what else, boys. It’s interesting to see how both girls deal with the conflict. We’re introduced to Amei as a sensitive, wronged girl, directly confronting the betrayal she feels at the hand of her overbearing, but kind mother who hid emails from Haruto under the guise of parental protection. Amei comes off as dramatic, though anyone who’s been a teenager in love can understand why. Meanwhile, Oto’s disagreement with her mother over Haruto has the former coming off as self-assured (albeit nervous) — and why wouldn’t she be? Though the stress of her father’s request to meet her boyfriend, and her mother’s obvious cold disapproval, loom over the entire scene, she’s coming at things with a sense of internal power. Nothing breeds confidence in a teenage girl like the validation of requited love from a cute boy.

Starting the chapter off with these interactions is a smart move for Kamio, as it lays the groundwork for future scenes. When Amei is seen confidently hanging out with the Correct 5 (even having the audacity to ask to see their salon, gasp!), we know her cheerfulness masks a deep hurt and longing for Haruto. When she suggests a group trip to Karuizawa, we know it’s less about reliving the good old days with her friends and more about manufacturing a situation that will remind Haruto that he loved her once and he can love her again. It backfires, of course; the conversation turns to Oto who, despite Amei’s subtle implication that she does not belong with the group, seems to be well liked by them. She’s described as “the unassuming type” and “not pushy,” descriptions that feel very prescient after we just witnessed Amei as the complete opposite. When she excuses herself to go cry in the hallway, it’s nonchalantly. She hides her emotions, where Oto seems to wear them on her sleeve.

There’s a lot of undercurrents of potential drama in this chapter, and the artwork highlights that well. While Kamio’s character designs aren’t particularly her strong point, with the biggest distinction often being a character’s hair (I’ve more than once confused Haruto and Eibi for each other in group scenes, for example), she excels at creating movement and tone. When Haruko teases Oto in front of the entire student body, Kamio is able to convey multiple emotions within the span of a page by switching up the art styles, from serious to silly to amorphous blobs and back again. And when Amei has her breakdown, the dramatic angles overlaid with the memories of Haruko’s increasingly frustrated, unanswered emails do a lot to convey her heartache.

Final Verdict: 7.5 — An enjoyable read with some nice character development that raises the stakes just enough to make you want to come back for more.