This week, Robbie and Kerry check in with “My Hero Academia” and “Moriking.” If you have thoughts on this or any other current Shonen Jump titles, please let us know in the comments!

To call this chapter eventful would be an understatement. It gives us action, backstory, plot twists, significant dream sequences – everything all still fitting neatly into a single exciting chapter.

On one part, we get to see more of Present Mic in action as he captures the no-good doctor. But even that is a good time for a villainous monologue, revealing new information about All For One, Kurogiri, and even the history of the world of “Hero Academia.” It focuses primarily on Present Mic, who we don’t typically get to see in action as much as the other teachers, but the core is more emotional. Given Mic’s connection to Aizawa and how their friend was turned into Kurogiri, it builds the tension nicely.

Then we get a dream sequence focusing on Shigaraki, his past, and his motivations. The artwork captures the bizarre nature of dreams nicely, filled with floating hands, architecture that’s connected to nothing, shattering memories and more. It literally puts us in Shigaraki’s head, and the visual symbolism is spot on.

As always, Kohei Horikoshi’s artwork continues to be impressive. While the dream sequence is an absolutely standout moment in and of itself, the rest of the chapter is equally impressive. The crowded and broken laboratory is a detailed setting, but that’s not where the real strength lies. The sheer emotion shown in every character is what gives this series its heart, or at least the core heart of the artwork. From Present Mic’s nervous expressions to Shigaraki’s memories of his family, every emotion comes through loud and clear.

One standout moment comes from when we can’t even see the expressions until the last moment. As Present Mic carries the doctor away, we see his back as he talks. The panels get closer and closer to him, until we can finally see his expression – a powerful and unnerving mix of wide smiles and tears. It’s a moment that lands excellently.

Final Verdict: 8.9 – This chapter is part of an important series of events in “My Hero Academia,” building upon the lore, characters, and storyline. It’s not a chapter to be missed, if just for the dream sequence alone. 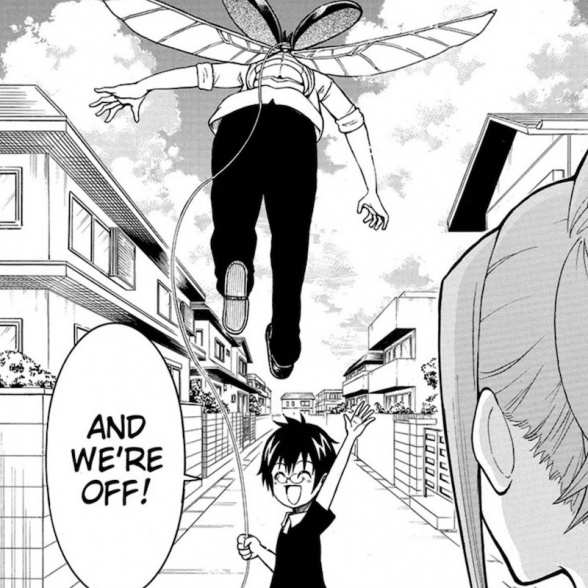 Nothing has delighted me more this week than the opening to this chapter. We see Shota, heading out to run an errand for his mom with Moriking on a leash like some weird hybrid dog-mothman. Interestingly, it ends up being kind of a foreshadowing moment, as the chapter ends with the search for an actual dog who escaped his own leash. Don’t you just love when stories circle back?

It’s still early days in “Moriking” and the series is working hard to establish a cadence of events and its character dynamics. The biggest conflict thus far has been between Moriking’s existence and Shoko’s inability to have any chill about it, which continues in chapter 3. However, it appears we finally reach a turning point. I was really worried Shoko was going to have a nervous breakdown mid-chapter, but by the end it seems she’s come to accept that this is just her life now and this weird, altruistic bug-man-king is going to be a part of it. What spurs on this change of heart? It’s all thanks to Moriking’s speedy recovery of a friend’s lost dog, which he’s able to achieve by requesting the help of all the bugs in the city. It’s a ridiculous sequence that involves him disappearing into a tornado. It immediately made me think about Sailor Moon’s transformation sequence, which, intentional or not on Tomohiro Hasegawa’s part, only added to my delight.

Speaking of Hasegawa, the humor in his writing and artwork continue to mesh really nicely. Particularly, I’m really enjoying the way he works random reminders of Moriking’s bug origins into them. My favorite might be how he draws Moriking in distress, which is on his back with his hands and feet splayed in the air just like a real beetle would be. It’s a nice, subtler touch than some of the more overt reminders like his horn protruding from the beanie they attempt to use as a disguise, or how he keeps defying gravity by flying and walking straight up walls and poles.

Though the chapter ends with Shoko giving Moriking carte blanche to use his insect powers for good, I’m not so convinced this won’t be the last time she has a panic attack over them. The chapter ends with mention of a “mysterious horned man” going “moderately viral” (I love the fact that it’s only moderately) online, which I’m sure won’t sit well with her. She’s in high school, after all! I’m sure there’s nothing she wants more than to just conform. Poor girl.

Final Verdict: 8.0 — Another well done chapter with art and a plot that can’t help but make you grin as you read it.