This week, Walter and Brian are checking in with “Black Clover” and “Yugen’s All Ghouls Classroom.” If you have thoughts on this or any other current Shonen Jump titles, please let us know in the comments! 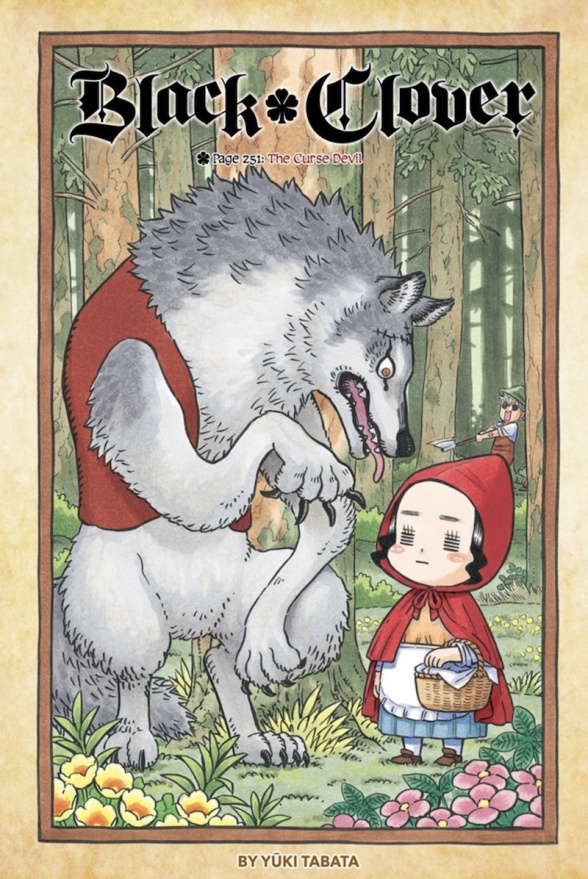 First things first: the cover page for this issue is delightful. Look at Little Red Riding Hood Charmy! Adorable. But I suppose that doesn’t really factor into the quality of the chapter, does it?

If I had to summarize the past hundred chapters or so in “Black Clover” in a couple of words, those words would be “fight bloat.” This began most notably in the Reincarnation arc, when Asta and the Black Bulls faced off against the reincarnated elves and the devil within the five-leaf clover in an interminably long fight scene. While I had my gripes about that at the time, it made some sense – this was clearly the first big “thing” that Yuki Tabata had been building up to, and so it was understandable he’d want to draw it out as much as possible. Now, however, we find ourselves still relatively early into a new arc mostly divorced from anything that happened before, and already the story has devolved into what I’d call a “fight slurry.” This most recent chapter is a rather blatant offender, relying on the trope of “ah ha, you thought you defeated my minions but they’re back to perfect health!” as an excuse to fill pages. I’m sure I’ve read countless comics where this has been done before without it rustling my jimmies, but considering the issues I’ve had with “Black Clover” recently this particular use seems egregious.

Perhaps I’m being unfair. “Black Clover” is, after all, a fighting manga – the main draw is to see a variety of fantastical characters clashing in unique, exciting ways. And “Black Clover” certainly has that in spades, though perhaps too much. One way that Tabata approaches his battles is by splitting them up into multiple fight scenes occurring simultaneously. It’s a more “realistic” approach than what you’ll see in a lot of manga, where one hero fights one villain, then a contrivance occurs that makes a different hero fight the next, and so on. But it also results in a less coherent narrative, where things advance incrementally in each chapter across multiple fronts, making the story itself a kind of vague haze of “things happening,” particularly as the arc goes on and on. Bringing back all the henchmen that were just bested only means that things are going to continue to be fractured and unfocused.

Thankfully Tabata’s art is the glue that holds his story together. With all the perspective shifts, his (mostly) unique character designs allow the reader to quickly readjust to what’s going on, who’s involved, and so on. On top of that, his action storytelling is usually clear and crisp, even on his busiest pages. And thank goodness for that – so long as I can follow what’s going on in the moment, I’ll keep reading “Black Clover,” but that isn’t exactly the highest praise. 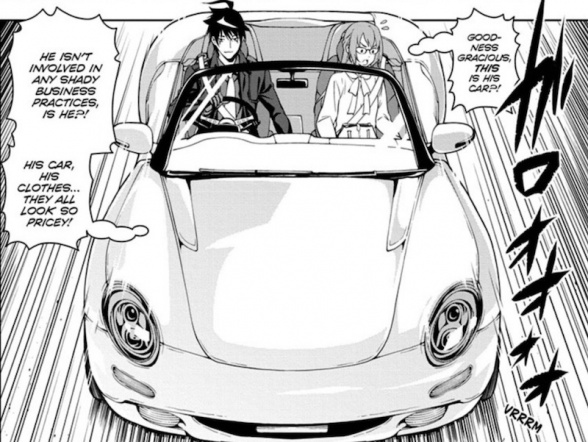 It’s fun when convention is played with, and stories do unexpected things. “Yugen’s All-Ghouls Homeroom” doesn’t exactly reinvent the wheel, but it adds a sort of running commentary on the actions happening in the strip, that exposes some of the more problematic aspects of many manga stories. The kicker is that, despite having a character basically running around saying “this is wrong!,” the main character doesn’t change their actions in the slightest, and is celebrated for their problematic attitudes.

In this story, we have Yugen, a jack of all trades who has been hired as a medium to deal with the haunted students of an elite all-girls school. He sees people for their inner beauty, even when they are possessed, which at first is a positive trait. But then, he talks about finding a wife at the school, and is opening trawling the school for a mate, despite him being clearly an adult and them being, well, minors.

The story has its narrator, Mishiro, a teacher at the school, openly comment on how fucked up it is that he is hitting on students, but she seems just as bothered that he’s hitting on the ugly janitor. Mishiro is also distrustful of Yugen because of how he dresses, which seems to be the least of his transgressions, but becomes a believer in his abilities when he is able to successfully identify the supernatural problems at the school.

Saeki is clearly a very talented draftsman, as “Food Wars” constantly showed, but he falls into the same creepy male gaze traps here, with him illustrating a teenage girl, freed from demonic possession, with an open blouse for absolutely no reason whatsoever. I was most impressed by how seamlessly he worked horror elements into his style, and managed to make some truly creepy creatures, rendered really impressively.

And that’s the real shame of this one-shot. There are a lot of interesting ideas and attempts at expanding the “Food Wars” playbook, but the creepy sexualization of teenagers continues, and as long as that is the case, I’m never going to really be on board.

Final Verdict: 5.8 – A strong concept, marred by the male gaze.