This week, Ken and Brandon check in on “Double Taisei” and “Samurai 8.” If you have thoughts on these or any other current Shonen Jump titles, please let us know in the comments! 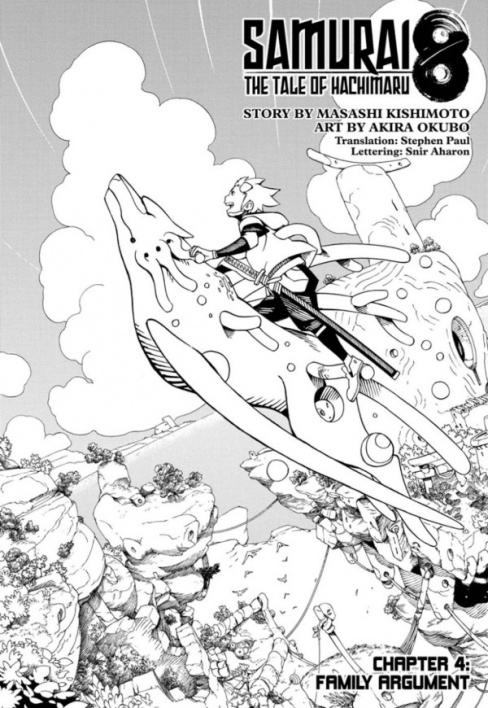 So far, “Samurai 8” has been doing a fairly decent job of introducing its world and its protagonist Hachimaru. But when you strip away the trimmings, the lore, the cyborg samurai cats there exists a very simple story at the heart of it all: the story of a boy wanting to go out and see the world, held back by his own insecurities and a parent afraid of losing their child. As the events here demonstrate, the relationship between Hachimaru and his father is the most interesting aspect and how it may become more splintered as the series moves forward.

I know it seems a bit gauche to compare this budding series to Kishimoto’s previous series, considering how much impact “Naruto” has had on the manga landscape, but I am going to make one small one, the first impressions both that character and Hachimaru leave on me. When you first meet Naruto, he can be a but much, almost overbearing. Hachimaru shares a lot of qualities, the fire, the ambition, the optimism. However, there is a defter, more subdued touch here. Perhaps it’s because Hachimaru’s anxieties and his situation being metaphorical to illness make it feel a bit more real to me. It makes Hachimaru a bit more endearing, whereas Naruto had to work a bit harder for me to connect.

Akira Okubo’s is pretty good so far, although not without some little some niggling aspects. The opening and ending scenes, of Hachimaru’s first flight and his decision to begin his journey respectfully display a great sense of visual wonder and determination. The joy that radiates of Hachimaru in that first scene is palpable as he flies higher and higher. With that said, there are some scenes and panels that feel a bit cramped with details that it makes it a bit difficult to comprehend what is going on. It doesn’t hinder the chapter, but it’s enough to be noticeable.

Four chapters in and “Samurai 8” is building itself up well. Kishimoto feels very recharged with the core of this story being very solid and with the fusion of sci-fi and samurai providing an intriguing mix of premises to be built around that core. Okubo’s artwork is providing a smooth sense of joy and wonder, despite some growing pains that will certainly iron themselves out as time progresses. This is certainly a book that has left me intrigued and wanting to see what comes next.

Final Verdict: 6.5- Kishimoto and Okubo are doing a good job creating the foundation for what could be a great series. 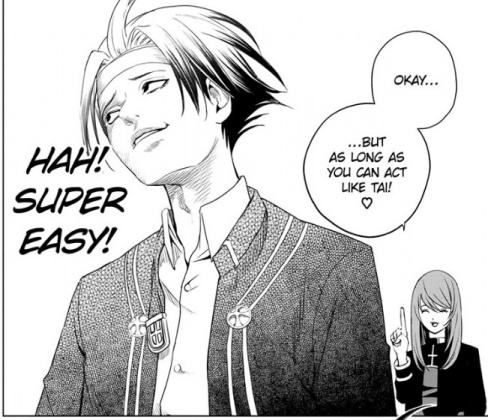 “Double Taisei” is a series about a boy who has two different people living inside his body, and both of them are really good at Shogi (Japanese chess). That’s kind of a weird pitch for a story, and, had I known this before I started reading it, I likely would have left it unread. But, here we are! Three chapters in, and I am thoroughly enjoying myself.

This week’s chapter follows our protagonist’s nighttime personality, Sei, on his first day under the sun. This fish-out-of-water premise gives us our best look yet into Sei’s character and how diametrically opposed he is from Tai, the daytime personality. Sei struggles through his first day of school while trying to pass as Tei to his unsuspecting classmates- with varying degrees of success. Here, we see more of the juxtaposition between the two: his desire to bring Tai’s personality back to the fore-front gets quickly undercut by his own shortcomings. Tai is charming and subdued, while Sei is obnoxious and impulsive. This plays for some great comedic moments, but more importantly, this adds an extra layer to the plot and the two personalities’ relationship with Shogi.

Who knew competitive (Japanese) chess could be so dramatic? Kentaro Fukuda, that’s who. During the Shogi matches, Fukuda frames the characters and action in a way that makes it easy to forget these people are playing a board game and not pummeling each other in mid-air “Dragon Ball Z” style. Excessive action lines and overly dramatic panels add weight to the Shogi games that don’t play for jokes but dramatic empathy. “Double Taisei” doesn’t take itself too seriously, but it takes itself as seriously as the story needs in order for the reader to care about the plot and characters.

Fukuda, by the way, is a fantastic artist. The most striking thing about his artwork thus far is its consistency. With many other artists, there are visible areas of both expertise and weakness, but Fukuda has shown himself to be more than proficient in everything from character design to backgrounds, to comedic pacing, and so on. In this chapter, there were moments when it seemed like he just felt like flexing his artistry and focused on hyper-detailed character drawings that were stunning.

There’s not much to gripe about here. There are no head-scratching artistic choices; there’s not any cringey dialogue or contrived plots. If there were anything to gripe about, it would be Kanade’s character: a young girl who is friends with both Sei and Tai. That’s it. We have no real investment in her, and she doesn’t seem to have any real motivation besides helping Tai/Sei win the Shogi qualifier matches. But otherwise, this is a solid book that, despite only being three chapters deep, is rising in the ranks of my most-anticipated weekly reads.