This week, Kerry and Brandon check in on “Demon Hunter: Kimetsu No Yaiba” and “The Promised Neverland.” If you have thoughts on these or any other current Shonen Jump titles, please let us know in the comments! 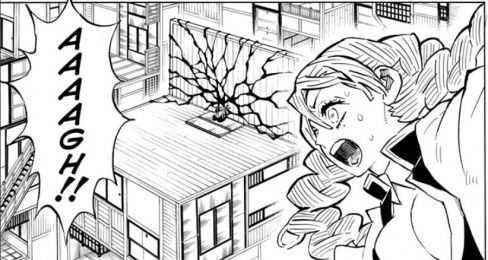 This is a short chapter, not in page numbers (it’s pretty average on that front), but in content. It feels short; not a lot happens in the resolution sense, but true to its name, most of the chapter does involve some unsuccessful attempts at demon slaying.

The chapter begins with Giyu and Tanjirou recovering around a fire, which Giyu is using to cauterize wounds, a very normal thing. Koyoharu Gotouge draws him looking very nonchalantly into the fire, almost transfixed, and it definitely enhances the insanity of his actions to both the reader and Tanjirou, who is clearly freaked out by the idea of sticking his own arm into a raging fire. Luckily, he doesn’t have to, as they’re gifted a distracting in the form of a (in my mind, demonic looking) crow announcing that Shinobu, Kanao, and Inosuke have defeated Upper Rank 2, putting them one step closer to Muzan.

Cut to the next scene, where Iguro and Kanroji are deep in the throes of a battle with an Upper Rank 4 demon. This basically takes up the remaining ten or so pages of the chapter, which fly by in a blur as they’re mostly art and lack speech bubbles. That’s not to say that not a lot happens — it’s a fight scene, and frankly sometimes the lack of talking can be appreciated (there are no lengthy monologues here!). After all, it really allows you to focus on the artwork, which is beautifully done. There’s a lot of movement depicted, complete with some excellent mid-action fight poses, and Gotouge does a good job of making you feel like you’re in the thick of things with them.

A note on the Upper Rank 4 demon: I’m sure it’s meant to be menacing, but I just found it hilarious. Don’t’ get me wrong, the character design is exactly what it should be, impassive and otherworldly with that one giant eye morphing what is otherwise a beautiful, meek, traditionally clothed woman into something grotesque and dangerous. No, what I found amusing is its fighting style. The demon is able to control the building around it, presumably with the musical instrument it’s playing, in order to thwart any attack that is made upon it. Fairly cool, if annoying for our protagonists, but the result is that for the entire fight, the demon does not move. It kneels in place, looking very demure, while attack after attack fails against it. It basically makes it look like a one sided fight, and makes the others look foolish when, try as they might, they aren’t able to land even one hit on this demon that does not move. It’s pretty funny to watch (read?). The fact Kanroji makes on page 14 pretty much sums up it up: sad trombone, whomp whomp.

The chapter ends with a big Upper Rank 1 demon reveal. One thing that I do appreciate about this chapter is that it doesn’t linger on one group of characters or fight for too long, even though the individual fights aren’t resolved yet. It’s always a pain when you’re forced to exist in one moment for multiple chapters which drag on forever (sorry, Dragon Ball, it’s true, but I still love you). Like I said, this chapter feels short, but it ends up being a good thing. You’re never given the chance to feel bored.

Final Verdict: 6.5 — A quick, easy, and entertaining read that relies mostly on artwork to move the story along and ends with enough of a cliffhanger to keep you wanting more. 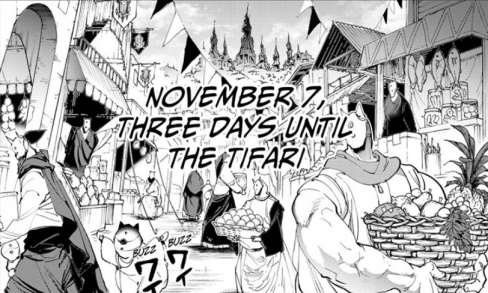 It’s been a while since there has been this much happening all at once in “The Promised Neverland.” Between Norman mounting a military move against the demons, Emma and Ray searching for the Seven Walls, and a group searching for Sonju and Mujika, it’d be easy for the series to get bogged down and overly busy, but Shirai and Demizu (mostly) manage to keep their heads above water and deliver a revelatory chapter full of plot progression and great characterization.

The first six pages are the weakest of the bunch, as it’s primarily an aside that takes us into the demon Imperial Capital. Demizu’s art is sharp as ever, and, personally, I can’t get enough of seeing the different demons’ designs and seeing what everyday life is like for the story’s antagonists, but using those pages in this chapter feels like a poor choice in pacing. The story from the previous two chapters ended with a heavy cliffhanger, and the one before that ended with an explosion of “wait… what just happened?!” so it’s a little strange that they’ve decided to take the reader to yet another location and spend the time there focusing on lore instead of the many things that have immediate import.

After that, though, this chapter moves at a breakneck pace. Emma and Ray stand face-to-face with the four-dimensional black hole from a few chapters ago and try to interact with it. Here, we see these character’s traits and personality on full display. As Ray begins to intellectualize the black-hole, Emma remains curious and optimistic- sure that this thing is the key to accomplishing their mission. Ray rambles on both out-loud and internally about the nature of the object and its implications regarding the rest of the physical world, but Emma stands calm and willing to face what’s on the other side. This resolve reaffirms why she is the series’ protagonist and not Ray: she is the one who’s willing to face whatever unknown danger in the interest in the greater good. The chapter itself even confirms this as, once they touch the hole, Ray is sent back to home base and Emma ascends to a higher plane of reality.

It’s on this higher plane that Demizu truly kicks his art into the next gear. The geometric, sci-fi setting where Emma and Ray first encountered the black hole was cool, but it felt slightly out-of-place in an otherwise mostly-fantasy series, but the full splash page where Emma stands in the sky where it’s both day and night is brilliant. The two sky-scapes feel totally natural and awe-inspiring- the kind of art you want blown-up and put on your wall. Not to mention the sequence where a giant demon dragon appears out of nowhere and descends to meet Emma.

This final sequence sees Emma confronted by the demon whose name can’t be written in any human language. This could have been heavily expository, but Shirai compresses all the talk of consciousness and mental-limitations into a digestible two-pages that, while maybe not the most original, makes sense. It’s basically The Matrix Reloaded, but considerably less convoluted and much more enjoyable.

This chapter displays the best of what “The Promised Neverland” has to offer, and a little bit of the worst. However, a bit of questionable pacing doesn’t outweigh the strong characters and the feeling of epic-ness that is on display here.

Final Score: 8.0- Just when you think the story couldn’t get any bigger, “The Promised Neverland” finds a way to prove you wrong.