This week, Kerry and Rowan check in with “Ghost Reaper Girl” and “Dr. Stone.” If you have thoughts on these or any other current Shonen Jump titles, please let us know in the comments! 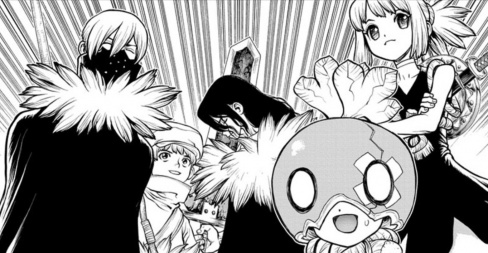 “Dr Stone” is in the middle of setting the stage for the ‘Craft Wars’ right now, meaning that this issue is a lot of table settings with a few fun moments interspersed to keep things interesting. Having Senku seemingly be killed by the enemy is a great way to mix things up on our protagonist’s side as it requires the narrative to rely less on the deus ex machina that his character seems to supply for them so often. Instead, the focus is placed on Chrome, who we see a bit more interesting development in as now he can read and write where he couldn’t before. Mysterious!

The developments on the side of the antagonists and Dr. Xeno are interesting in that they have a lot of fun and flashy character appearances. Mr. Gen is great for dramatic moments as he has that kind of extreme emotional spectrum typical of shonen manga, but dialled up a thousand times. He’s the only character with internal dialogue so he’s great for really letting readers mull on a moment due to how dramatic he finds that moment. The introduction of Stanley Snyder as the resident bad boy of the team is terrific too, as Inagaki gives him succinct and perfect amounts of dialogue that we simply must swoon over him

Boichi delivers a buoyant and delicious art style in this issue as per usual. I always love how many little moments are accentuated in their art style, like the zoom in on the unconscious Senku in the first few pages that shows a hint of his trademark grin creeping across his face. The little mockup of Chrome and the gang infiltrating the enemy base has great emotional details on each characters’ face even if it is just enlarged eyes. Or even the detailing on the front of the enemy base when an arrow is shot into it! Boichi is great at noodling these little details and it’s great for people who like to sit and take in a scene.

As I touched on with Inagaki’s writing, there’s some terrific emotional high points in this issue that Boichi amplifies big time. Mr. Gen is again, the focus here, with the first big splash image of him really setting the tone for his character. Boichi draws him with an outstretched hand and the other clasped over his mouth agape in shock, paying homage to classic Horror pulp covers. What I really love, however, is when Boichi can juxtapose this extremity with a much more cool, calm and collected character. Stanley embodies this when he arrives on the scene, lighting a cigarette that he somehow got in the post-apocalypse. The panel that really exemplifies this contrast, however, is when Gen is crushed comically by Stanley’s totally calm bodyguard, showing both extremes in the same panel.

“Dr Stone” is moving a little slower than I would like but there’s a lot of good craft on display in this issue and some fun character moments and plot developments. This keeps readers suitably hyped for what’s to come in the Craft Wars.

Final Score: 8.4 – A good issue to set up what’s to come with it’s own fun moments and attention to detail.

Listen, before we say anything about the plot in this week’s installment, it’s important to acknowledge how gorgeous the art in “Ghost Reaper Girl” is — the characters, the scenery, everything. I find myself constantly staring at a panel just taking it all in before even realizing I haven’t read the text yet. Akissa Saiké draws everything so imperceptibly delicate, you can practically feel the wisps of hair as they fall around a character’s face. His shading work is particularly nice as well. This manga is definitely candy for your eyes.

“Ghost Reaper Girl” is shaping up to be a gender-switched harem manga with Chloe’s male familiars fighting for her attention in between the action. As a big fan of “Fushigi Yuugi,” I am definitely here for this. It’s actually surprising how shojo this manga feels so far, considering this is Shonen Jump, but it’s safe to assume that means there will be a lot more fighting than will they/won’t they romance in store for readers in the future. Hopefully there will be a bit of a balance between the two themes, though. Too much of either, fighting or romance, can get tiring unless you’re specifically looking for just that.

Speaking of romance, Kai and Chloe were basically set up from the beginning to have a bit of that spark between them and this chapter is no different. However, we finally get a taste of Kai’s life before the two met with a trip to Akham Bullet, aka the “bureau for ghosts.” It’s a great little field trip. Saiké blends the seriousness of reality with the cartoonishness of some of the characters — like Men in Black, but ghosts — to hint at something darker in Kai’s past. He transforms in anger after Chloe gets hurt protecting Noel, only to be stopped from creating any devastation by “an old friend.” Her name is Nyarlathotep (Kai refers to her as “The Chaos” while she refers to him as “The Disaster”) and we aren’t able to garner much information about her before the chapter ends. It is clear, however, that she’s a higher ranking ghost than the ones who just attacked Chloe. She doesn’t seem particularly trustworthy, both her demeanor and nickname (or is it her title?), but again, it’s hard to tell. It’ll be interesting to see what insights she’s able to give us about Kai, Chloe, and the ghostly realm that’s rebelling from Hades.

No matter what happens, though, I’m calling it now: this will make a great anime one day.

Final Verdict: 7.5 — Chapter 3 adds some fun world building while maintaining a high standard of art that makes “Ghost Reaper Girl” a pleasure to read, as well as to look at. 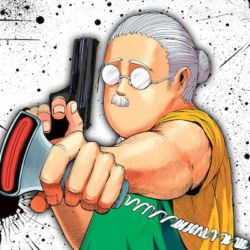 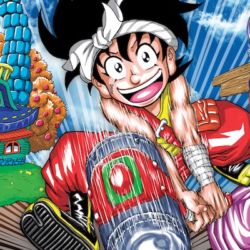 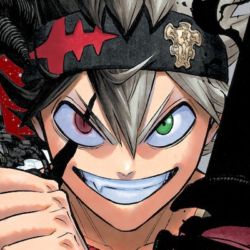