This week, Kerry and Walt check in on “Yui Kamio Lets Loose” and “Mission: Yozakura Family.” If you have thoughts on these or any other current Shonen Jump titles, please let us know in the comments! 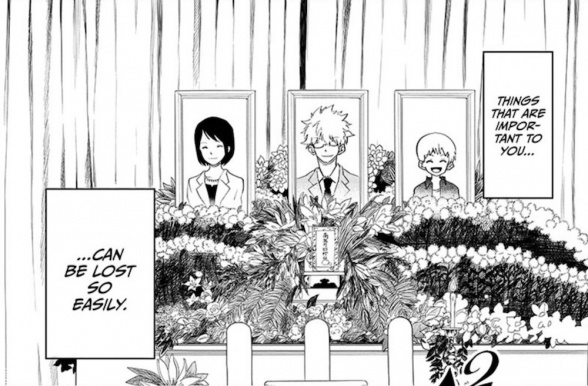 I’m not going to beat around the bush, I disliked the first chapter of this new series quite a bit. Perhaps I’m just bouncing off the concept hard; if I’m being honest, I find it hard to pick out that much that’s technically weak with the chapter. For those who are into the premise, the writing will probably be good enough to carry the concept. “Demon Prince Poro’s Diaries,” Hitsuji Gondaira’s previous series in Weekly Shonen Jump, was somewhat the same way: it wasn’t superbly written or illustrated, but it had a cute hook that made it pleasant read for its short run. Of course, the problem when you’re relying on your hook is… well, what if it’s bad?

The story revolves around what has become a very common trope in manga: the creepily over-protective older brother, only said older brother is a master spy (which Gondaira seems to conflate with being an assassin, which I suppose is fair when you look at Bond and other such super-spies). Some modicum of credit is due in that Kyoichiro, the older brother, isn’t portrayed as just being “cute” or “funny” for being grossly obsessed with his younger sister, Mutsumi. It’s pretty clear that this isn’t healthy or good! But that doesn’t change that I just don’t want to read anything that primarily centers around this kind of relationship. And it’s not like Gondaira subverts the paternalism of the trope: Asano, the main character, marries Mutsumi in the final pages of the chapter not just to save his own skin (Kyoichiro can’t kill a member of the “family,” after all), but to “protect” her. Perhaps someone out there will like this, but that someone isn’t me.

If I could say one (mostly) positive thing about the chapter, it’s that the art is pretty good. Not the kind of work that will blow your socks off or anything, but it’s certainly readable. Some of the action scenes are creative in ways that could easily be much more confusing than they are on the page, and the characters are expressive. While most of the character designs the main cast members have are somewhat generic (though not bad), there are a couple that are kind of neat. Unfortunately for Gondaira, slightly above average art isn’t enough for me to give this another shot.

Final Verdict: 3.5 – Maybe unfair considering how little technical complaints I had, but I really, really did not like this. 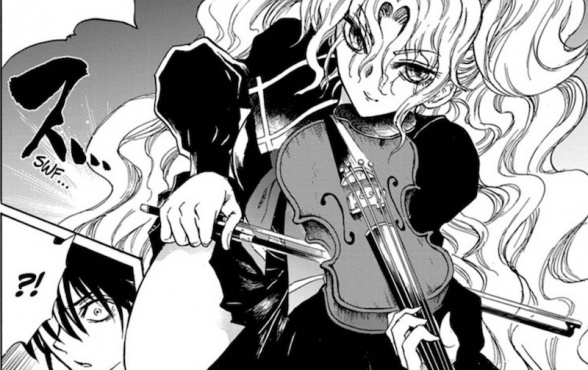 Chapter 23 of “Yui Kamio Lets Loose” doesn’t let you catch your breath — the reader is thrown right back into the middle of the action in the fight between Yui and the Deathly Violin Boss.

Which, before we get into it, a note on that violin.

“Deathspellivarius.” Really? Is that the best pun we could come up with? I was curious whether that was the actual name that Hiroshi Shiibashi came up with, or if it was just Viz’s attempt at a translation pun, but when I googled it, it literally returned zero results. I guess I’ll never know, unless someone wants to enlighten me (I am available on Twitter at all hours, please satiate my desire for closure on this). I get what they’re going for, it’s a Stradivarius that ostensibly has the power to kill people, but still. What a mouthful.

What follows is a series of very well drawn action scenes, the highlight of which is on page 3 when poor Yui gets a knee to the face from the Violin Boss. You can practically hear the crunch of her cheekbone as it makes contact. Another great moment happens on page 14, where we get to see Yui, perhaps the most vulnerable she’s been, as she’s overtaken by the Deathspellivarius and it’s “bone conducting” music.

Yui is clearly surprised by this, and it’s a nice change of pace to have her pride taken down a notch. Up until now, she’s been painted as a force to be reckoned with, having not met her match despite apparent years of being the thorn in the side of every baddie for miles. She is nothing but eternally cocky, most recently in the last chapter towards poor Kiito, who is only trying to help in the best way a boy knows how: with misplaced confidence in his own strength, offering to protect a girl he is presently having his butler restrain via drone so he can have a simple conversation with her.

Yui’s shock at being overpowered is palpable, and it leads to the big reveal of the chapter: Deathly Violin Boss is not Yuriko, the girl who fought and lost against Yui previously. She’s actually Ayako, Yuriko’s younger sister, back to avenge her sister’s demise at the hands of Yui. Of course, as we all know, nothing is ever so strong in a manga as a deathbed vow to avenge the honor and/or life of a fallen family member.

Speaking of tropes, Ayako quickly makes the assertion that Yui is weaker than when she fought her sister, because she now has friends. The implication, obviously, is that she can’t be detached from the consequences of the fight; she cares about her friends and doesn’t want to see them hurt. It’s a distraction. But again, as we all know, the joke’s on Ayako, because everyone is stronger with friends!

Which leads to Kiito, the unsuspecting hero of the battle, who comes up with a great plan to save Yui after running into his saxophone playing classmate, Chizuru, who somehow hasn’t been turned into a zombie like everyone else. He realizes that in order to beat Deathspellivarious, they must drown out its music with louder music, which seems like a sound plan (puns! ha). Chizuru swoops in to distract Ayako from completely overtaking Yui with a full body drawing that is absolutely adorable. Her confident stance juxtaposed with the wobbly music notes that clearly broadcast her lack of musical ability make me want to spend an entire chapter following her around, watching her practice saxophone in other random corners of the school. The squeaks! The squawks! But then Kiito comes busting in with giant cymbals and everything is ridiculous, because he’s followed up by Nao playing a drum and the butler-turned-drone playing triangle. Page 17 is easily my favorite panel of the entire chapter, seeing the three of them adorably determined yet comically bizarre, wailing on their instruments.

It proves to be effective, because the Deathspellivarius is smashed. Score one for brains over brawn, I suppose! Good job, Kiito, Don’t let anyone ever tell you you aren’t more than your good looks.

Final Verdict: 6.5 – A little too predictable in its tropes, but inoffensive enough that it’s still enjoyable with lots of pretty panels to look at. 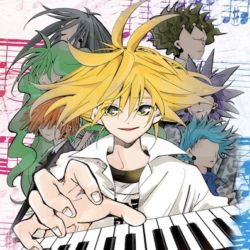 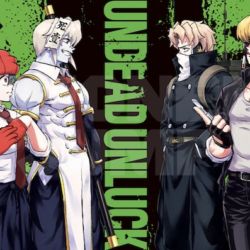 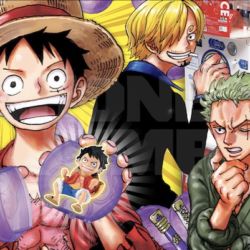