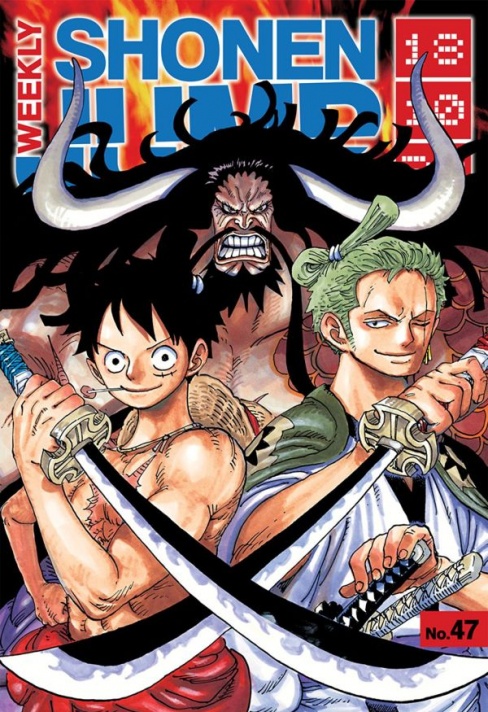 This week, Ken and Robbie check in with “Boruto” and “One Piece.” If you have any thoughts on these titles, or “Black Clover,” “Dr. Stone,” “Hunter x Hunter,” “The Promised Neverland,” “Food Wars,” “The Comiq,” “Yu-Gi-Oh Arc V,” or “We Never Learn” let us know in the comments! 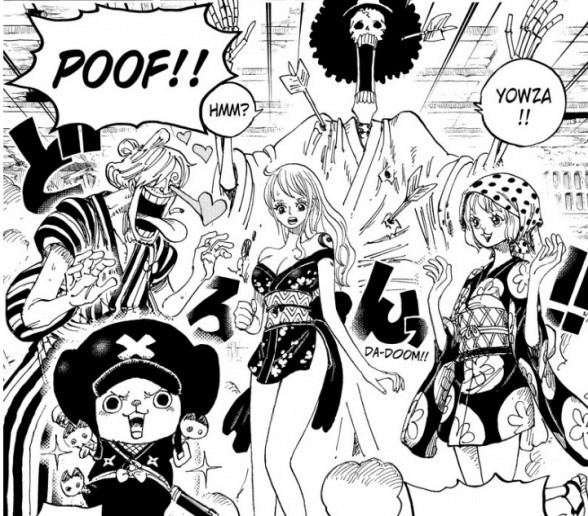 Chapter 921… can we take a moment to acknowledge just how long “One Piece” has been running for? Because for all that we’ve seen, it doesn’t seem to be running out of steam, and continues to throw new twists at us. We’ve recently had time travel thrown into the mix, but things get even crazier as this chapter ends.

For the most part, this issue is a lot of exposition and planning. We’ve now learned about what happened in Wano 20 years ago, and Kin’emon’s plan to gather allies and defeat Orochi. Much of the dialogue early on is even more planning, including dropping the names of even more characters we’ll have to meet later, but Eiichiro Oda lightens it up by weaving some humor throughout.

We get a callback to some classic “One Piece” humor with Sanji and his shattered perceptions of kunoichi, nicely mirroring his first encounter with a mermaid. That’s mixed in with a little slapstick and fanservice as Nami’s given a somewhat more revealing kunoichi outfit and makes Kin’emon instantly regret it. (Even then, the scene is stolen by Chopper in a ninja outfit.)

Yet the second half of the chapter provides us with a little action as well, with two side characters clashing. In a situation like this, one would typically expect the high-ranking pirate character to make quick work of the bandit, but as the bandit is an ex-samurai, we actually get a clash that shows off both their strengths.

Oda’s artwork remains impressive throughout, filled with unique character designs of all shapes and sizes, and I mean that quite literally. Even in the scenes where the characters are just sitting around, we still get some great reaction shots as the characters speak, interspersed with half-flashbacks. The looks of the characters in Wano-style outfits are all well-designed an appropriate, and I look forward to inevitably seeing people cosplaying those outfits (and I’m not just saying that because Nami gets a skimpy kunoichi outfit).

When the action starts, we get some intense shots and splash pages showing the might of the characters. There’s an almost ridiculous amount of action lines, but they don’t get in the way, and only serve to add to the impact of each moment.

Yet from both a story and artistic standpoint, the last page is where things get really interesting. While I won’t spoil it, we do get to see a character that’s been built up for some time, and it’s an unexpected twist with great power behind it. Even if this chapter is mostly buildup for what’s to come, the last page leaves readers wanting more.

Final Verdict: 7.3 – Oda continues to prove why “One Piece” has lasted so long, with good character designs and moments, a bit of nice action, and a stunning last page. While half the chapter is just setup for what’s to come, even that gets some entertaining moments in. 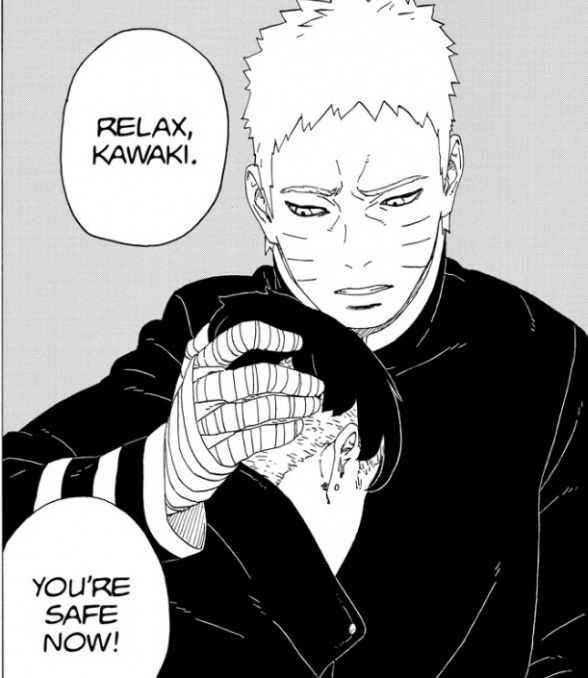 With the addition of the mysterious Kawaki living at the Uzumaki residence brings with it a slight change in dynamics among the cast. Chapter 28 of “Boruto” has Naruto and Kawaki joined by Sarada to go on a venture to replace a vase that Kawaki broke. Now, I know I just described it in the most mundane way possible, but stick with me. It allows us to take a glimpse at Kawaki’s character, how he interacts with others and perhaps see if there is a bit more lying under the surface to this new character.

I won’t lie, the bits that we learn of Kawaki’s personality here aren’t what one could call “unique”. A crude, sullen, distant kid that seems untrusting of everyone. However, it becomes very clear that there is more going on that, again while not unique, are the stepping stones to more. We see in this chapter that underneath his stoicism, Kawaki is a very traumatized child. He’s quick to defend himself when he’s really not in any danger and he straight up has a mini-panic attack when he’s reminded of something in his past. But it’s not all darkness, because while traumatized, he is a kid. A moment that stands out is when he has a chocolate taiyaki for the first time and realizes how good it is. Ikemoto’s expression for Kawaki is hilarious: almost as if Kawaki is personally offended at how good this is and no one told him.

But it’s not just Kawaki that gets moments here. Naruto and Sarada have their own moments. In Sarada’s case, we first see her and Kawaki be pretty snippy between one another, with Sarada really disliking his personality. However, she demonstrates some really good intuition, tying into her ambition to becoming Hokage and that means helping people. So, seeing what is going on underneath Kawaki’s surface, Sarada offers to help him if he ever needs it. It also ties into Naruto’s own actions here, comforting the boy when he goes through his aforementioned panic attack. It shows a degree of empathy, no doubt tying into when Naruto himself was a kid growing up in Konoha, having barely anyone to rely on.

Artistically, there’s minimal action in this chapter, so it allows Ikemoto to focus more on character work. I’ll be honest: I think Kawaki’s character design tries a bit too to emphasize that “I’m a L0ner!!” mood, but being able to see him soften a bit in this chapter and show vulnerability helps it somewhat. It allows for some contrast between his normally dower self. However, I won’t say Ikemoto’s character expressions are perfect. He gets a lot of the larger panel expressions well, but when we see multiple character expressions in smaller panels that are supposed to be expressing concern, they come off just more neutral-faced.

“Boruto” Chapter 28 is a more low key one that allowed for some calmer moments. Nothing in this chapter is what one could call revolutionary, but the foundation it does lay is pretty good. Future chapters are going to be the ones that’ll have to grow into more uniqueness from these starting points.

Final Verdict: 6.4- A decent, character-centric chapter that allows us to dive a little bit more into Kawaki’s character.