This week, Zach and Vince check in with “One Punch Man” and “Dr. Stone Reboot: Byakuya.” If you have thoughts on these or any other current Shonen Jump titles, please let us know in the comments! 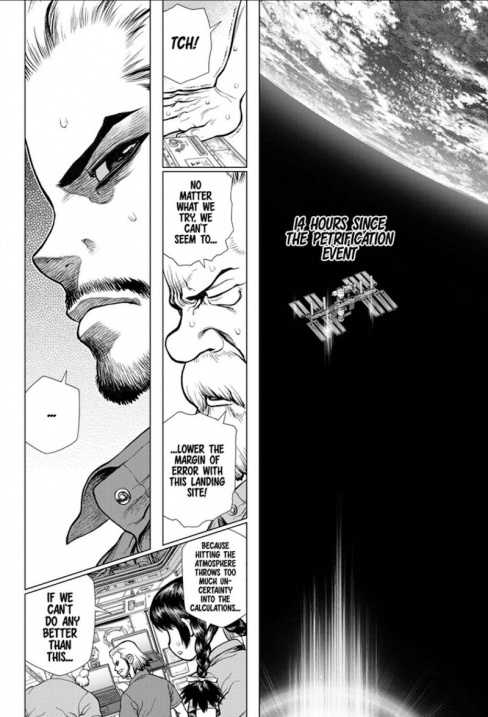 Thanks to his adventurous and detailed work on the main Dr. Stone series, Boichi has become one of my favorite working manga artists. Though the term “reboot” in the title was clearly a misnomer based on the description alone, I was pretty excited to be getting a story that would maintain Boichi’s strong creative connection to the original manga, while allowing him to flex more of a writing muscle. I’m always interested to see an artist write their own story, because the balancing act of writing for your own artistic vision can be more challenging than it sounds. One complaint I often have when I’m reading a story written and illustrated by the same person is that the artist simply wrote too many words and covered up their art, or told instead of showed, leaving themselves with less interesting things to draw. That seems like an odd thing to say about creators that primarily work visually, and I realize it’s anecdotal to my own experiences as a reader, but it seems to happen more than you would think. I’m happy to report that Boichi mostly navigates around those perils well and does not succumb to them, but there are other aspects of the story at play here that trip things up and left me with a manga that simply didn’t grab me.

I’ll begin with the positive, as there are certainly things to like here. For one, the Boichi art is fantastic, as per usual. He depicts close-up drama and goofy comedy just as well as he pulls back to depict the grand void of outer space. At times Boichi is almost showing off how much his art has grown over the last few years, using a similar sort of scientific “data” page as we’ve seen him do over in Dr. Stone proper, yet perhaps offering the most detailed and nuanced version of that gimmick yet. Boichi depicts the technology used to run several simulations of the crew’s potential to drop to the petrified earth below and survive. This is accomplished over a double page spread which clearly shows how and why they might succeed or fail, several times from several different points on the arc of the earth’s atmosphere. This aspect is as strong as any of the scientific bits from the Dr. Stone manga, and a little hat-tip to the credited science consultant “Mscoolastro” is well-earned here. The comedy is also a positive aspect of this series, as I think Boichi has the potential to be a very good comedy writer. The characters are well-drawn with unique personalities that bounce off one another at a fast pace. They all also contain subtle visual nods to corresponding relatives in the main Dr. Stone series, which really adds a unique tether and makes Boichi’s ability to balance both series pretty crucial. Much of the emotional connection felt in this story can be credited to these very natural feeling ties to the aforementioned series.

Unfortunately, the pacing of the chapter itself is pretty problematic, as entirely too much time is spent on the crew debating the best way to eject themselves from space and land on Earth. A circular conversation occurs between the characters, where they try to decide which of several drop targets would be best. It feels like the crew spends too much time going back and forth on this, to the detriment of the story itself. The argument is based in science and it probably plays out the way a debate between space travelers in potential danger would, but in this case, realism doesn’t make for entertaining reading. What’s more, a lot of the information involved in understanding the specificities of their problem is doled out so succinctly in the aforementioned science diagram page, that the dialogue surrounding it feels even more redundant at times. If the point needed to be hammered home more, it would have benefited the book to either use an additional infographic and simply spend less page time on it. When the crew finally comes up with a plan for breaching Earth, the chapter stalls with a seemingly unnecessary barrier to achieving the crews goals, with an immediate deus ex machina device that a team of the brightest astronauts the world has to offer surely should have already thought of. It was here that the series really felt like it was stretching to create drama when we already know mostly what will happen, thanks to the pages of Dr. Stone, a manga you should already be following. That’s where the trade-off with Dr. Stone Reboot: Byakuya lies: the emotional resonance of the characters and their fates is undermined by the series struggling to create real conflict without dragging it out.

Final Verdict: 5.5 – The “Dr. Stone Reboot” series has a bit of charm to it, but it feels a little contrived and undercooked as a concept, leaving the whole exercise seeming unnecessary. You should be reading the original Dr. Stone, but this story is only for the biggest fans of that series. 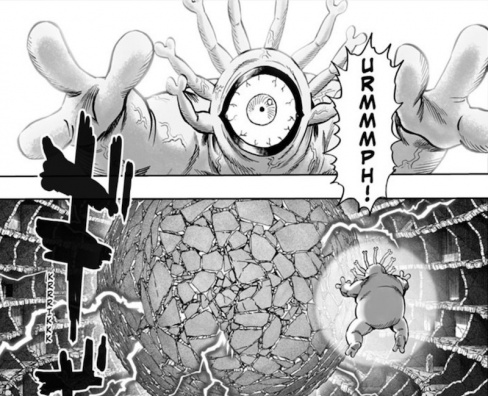 For several years “One-Punch Man” has featured a massive, sprawling story of heroes versus villains. This chapter seems to take a major step forward in resolving this conflict, pitting two of the series greatest heroes against its two greatest villains. The result is chapter full of (literal) gravity and spectacle.

First up, we have petite psychic wonder Tornado against monster strategist and second in command of the Monster Association, Gyoro Gyoro. Pitting these two psychokinetic masters against one another fuels Yusuke Murata to craft several stunning pages. Despite never laying a finger on one another, their battle is bloody and visceral in true “One-Punch Man” fashion. Of course, the battle is also balanced by a bit of levity, as Murata cycles back and forth between Tornado’s realistic and chibi designs throughout conflict.

Gyoro Gyoro transforms into his “true form,” yet Tornado seems to get the upper hand. It seems unlike ONE and Murata to dispatch such a major villain in under 20 pages, so I doubt this is the last we’ll see of Gyoro Gyoro. In a last ditch effort, Gyoro attempts to summon Orochi to aid him. However, Orochi does not come, suggesting he has more pressing matters to attend to…

“One-Punch Man” has always danced, rather coyly, around the power and importance of Saitama. The ever bumbling, inconspicuous hero makes mincemeat of every villain he comes across, while no one is the wiser for it. Now it seems the monster king Orochi has recognized the threat of Saitama and is gearing up for a confrontation with the one-punch savant. Despite the high states, Saitama responds in perfect form; “First two naked dudes, then a dog and a cat, and now…I don’t know what this is.”

These major developments within an unusually short chapter seem to herald the beginning of the end for the long-running ‘Monster Association’ arc. Of course, I’m historically awful at predicting the flow and pacing of manga stories, so we could have many more years before this story is resolved. Nevertheless, I’m happy to report that “One-Punch Man” continues to balance its widescreen and violent spectacle with irreverent gags and send-ups on the “very serious” superhero genre.

Final Verdict: 7.7 – A short chapter that packs in some significant moments for this long running arc.