This week, Robbie and Ken check in with “Double Taisei” and “My Hero Academia.” If you have thoughts on these or any other current Shonen Jump titles, please let us know in the comments!

This chapter, and subsequently this arc, is really going to boil down to your thoughts on one question: Does Endeavor deserve a redemption arc? Trust me, that is not a simple question as it would appear and all you need to know about that is just take a gander around the My Hero Academia fandom to see a myriad of opinions on the subject. I myself have my own opinion on it, and that opinion does affect how I felt about this chapter and where it’s potentially going. But more on that towards the end

At a basic overview, this is a chapter where Midoriya and Bakugou have been invited to dinner at the Todoroki home and the awkwardness it brings. Midoriya, bless him, tries to keep things civil, even if he does start overanalyzing the food. Bakugou also brings a bit of himself; his… explosiveness providing a sheer contrast to the quieter moments. Visually, Horikoshi has provided examples of awkwardness that both work well and not so well. The quieter moments such as the annoyance on Natsu’s face work well, but there are some moments that go over the top for what was trying to be accomplished. I’m talking about the moment of tension during the dinner itself felt a bit… shonen-ey, for lack of better terms and I just feel like what was supposed to be semi-humorous fell flat.

Now for the ending scenes and the return to the discussion from prior: Is Shouto getting to forgive his father. There’s a contrast of scenes between Shouto/Midoriya/Bakugou and the final scene with Enji Todoroki alone. They’re about Shouto’s hesitance and Enji’s desire to want to do good by his family even if it’s too late (also, the last panel just continues to tease one of the longest-running threads of this subplot because Horikoshi is a sadist). They are both well done scenes, it is just going to come down to your own subjectivity. Me personally: I don’t want to see Shouto forgive his father. I think there are some lines that have been crossed and they really shouldn’t be repaired. But that’s just me. You could have a completely different take on the subject and it will greatly affect how you feel. And you would not be wrong thinking that.

Final Verdict: 7.3- Horikoshi provides another good, if at times awkward, piece in one of the major subplots of the series. 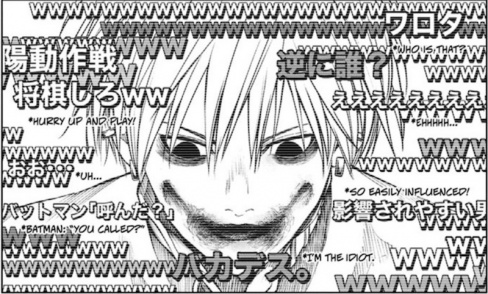 Double Taisei faces a challenge that any manga about games like shogi or go do: make a series where people play the same game against each other and keep it interesting. Several have tried, and a few (like Hikaru No Go) have even succeeded. Double Taisei is attempting this in a few ways, primarily through its characters and the way it illustrates each character’s playing style through visual symbolism.

This chapter mixes things up a little by showing us the game from two perspectives. To start with, we have Sei’s match against Haga, which keeps things fresh with Haga’s tendency to change wigs based on whoever’s style and skills he’s trying to copy and fight imagery. Along with that, we get an outside look as we see the other shogi players watching a livestream of the match – plus online commentary.

The online commentary acts as something of a chorus, adding in commentary and snark whenever it’s turned on. Of course, that’s mixed in with lots of spam and “wwwwwww” commentary (the Japanese equivalent of “LOL,” according to the notes), but I did appreciate the movie references sprinkled throughout.

For a more organized commentary, we also have the other shogi players observing the match and realizing Sei’s secret. That’s confirmed when Sei explains it, so the chapter provides new plot developments that will impact how the characters are viewed and interact with each other. All together, it keeps the other characters active while still making the chapter focus primarily on the match.

Strong character work and story progression is one half of the requirements for a successful shogi manga. The artwork must be engaging as well. Kentaro Fukuda’s art is clean and detailed, giving us strong character designs and dramatic effects. Adding action lines when players move their pieces makes the matches more dynamic, so the games remain entertaining even if you don’t know a shogi board from the backside of a checker’s box.

It’s hard to describe a manga about shogi as “action packed,” but Kentaro Fukuda tries, and does a pretty good job at it once the game illustrations switch from literal to metaphorical. When we get Sei and Haga standing on a fighting ring shaped like a shogi board (complete with JoJo-esque “doom” sound effects) their moves are drawn like charging into combat. It culminates in a great image that overlaps flashbacks, pieces getting placed on the board, and a cross-counter punch. It’s as close to exciting as a shogi manga can get.

All in all, Double Taisei manages to keep things entertaining with a mix of good characters, commentary, and artwork, even if you don’t know the first thing about shogi. It’s enough to keep me entertained, and the movie references don’t hurt.

Final Verdict: 7.7 – A solid chapter that moves the plot and characters forward, backed up by good strong artwork. 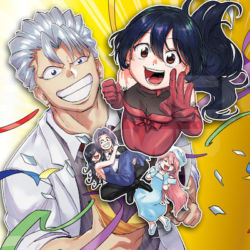 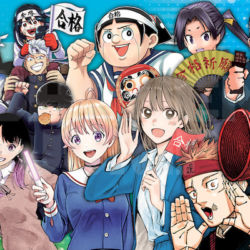